Updates? There are a couple.

The frame has been well Maased since my last post, and is still looking nice and shiny. And some parts have started to slowly arrive here too.

I have it in my head that I'll wait to do any significant updates regarding components until there's a fair old stash of them gathered. But I guess we'll see, because I already have some major questions about one of them! (More on that shortly.)

I do have a pretty clear direction for the build planned out in my mind now though. Something that is hopefully a little further off the beaten track and away from the expected arrangement of a Team Issue.

For one, I've decided to play fast and loose with era-appropriate parts. I'm not straying too far, don't panic! But it may end up teetering between the very early 90s and around '95 or so. Just based on what I've already picked up and what I'm still on the hunt for.

"Two summers of riding and two winters of upgrading."

Say you bought yourself a new bike in '92; threw some old favourites on it when it arrived and updated a few others in the years following. That's kind of the vibe I'm going for.

The other vibe is to build my very own donor bike.

Okay, so bear with me a minute here...

There are two, maybe three, bikes I'd really love to own some day. I mean, there's probably five. Maybe ten. But let's say three! And my thinking for this Team Issue of mine is to base the build around parts I might one day need for these hypothetical future rides.

A bit weird, I know. But maybe kind of fun, too.

You see, starting out with the Specialized and following it up with this Marin (both proper mainstream, mass-produced, albeit still beautiful, bikes) has really focused my mind a little on what I want and what I don't want moving forward. This place has helped a lot too, of course. All those fine bikes; all those dream builds. But I'm not planning on ever owning a shedful of bikes (I don't have the room and don't imagine I'll ever have the money) and I don't really want to keep buying just for buying's sake (no matter how tempting that might be). There are, however, a handful of bikes, by a couple of master builders, that I do really want to own one day, and I've made up my mind recently to slowly start actively trying to locate one or two of them. In the hopes of eventually having a couple of longterm holy grail projects on the go. Rather than just a bunch of smaller, less holy grail ones!

These are all undoubtedly pretty expensive bikes. They are deep-pockets, long-shot, happy-accident kinds of bikes. And I don't want to limit my funds and thus chances of ever scoring one in the future, should they appear on my radar; on here or on eBay; in some dusty barn or damp cellar somewhere.

Now these dream bikes of mine might never materialize, of course. So it's important that what I put on the Team Issue works well with what it is in the first place. Which means I won't be doing anything too crazy! Hopefully it will just be a nice-looking bike that's actually a tribute to two or three other bikes!

Settling on this idea has already really helped focus both my hunting and my purchases.

Do I really want this? Would it work on A, B or C in the future?

Anyway, maybe you guys can figure out some of the bikes and their respective builders based on the parts that end up going on this one?

Well, I guess this little essay is over for now. And I'll save the questions I have about one of my purchases for another day...
Last edited: Jul 27, 2021

I completly agree with you on the "why catalogue " front.

I never bought a bike and kept it standard! My 89 team marin lasted about......ooooh......10 minuites from new before i put toeclips and a dayglow lycra saddle cover on it!

By 91.......it had been resprayed, parts changed and was nothing like standard....it was however (and always will be ) my bike.

When i decided to restore it a few years back, i restored it back to its " heyday" for me....not for marin.

Hope to see it soon.

Tootyred said:
I completly agree with you on the "why catalogue " front.

I never bought a bike and kept it standard! My 89 team marin lasted about......ooooh......10 minuites from new before i put toeclips and a dayglow lycra saddle cover on it!

By 91.......it had been resprayed, parts changed and was nothing like standard....it was however (and always will be ) my bike.

When i decided to restore it a few years back, i restored it back to its " heyday" for me....not for marin.

Yep - same applied to my Marin IFT - it was a bit underwhelming in catalogue form, so my restored one has a higher spec similar to how I had it before it was pinched

Okay, so time to talk a little more about that first major purchase...

An early (ish?) Syncros Powerlite fork (with a 1 1/8 steerer). Fairly used and abused, but nothing too bad, I don't think: 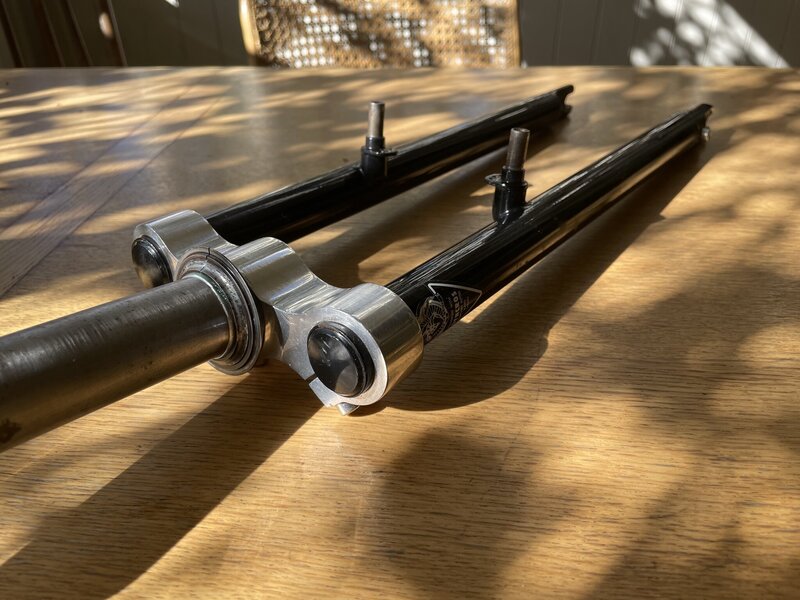 Of course, the Team Issue came with Rockstar's (in fact, it came with a lot of stuff I'm replacing). Perfectly serviceable, original Rockstar's. In black, too! But hey, where's the fun in keeping those?

These particular Powerlites showed up on eBay one afternoon, and I happened upon them maybe forty-five minutes later. The seller was relatively local to me, so I figured there was no harm in asking...

They were promptly secured with a deposit, for a cash sale at a relatively reasonable price (much less than they've been going for recently), taken down from auction and very kindly shipped to me at no cost, when we couldn't get our schedules to align in order for me to come and collect them.

Not only that, but they arrived before I'd even got around to paying the balance, as all this had been arranged just prior to payday. A reminder to myself that nice people, trusting people, really do exist!

Thanks again Sal! All of the above was as appreciated as it was unexpected.

Okay so here are a few more detailed shots: 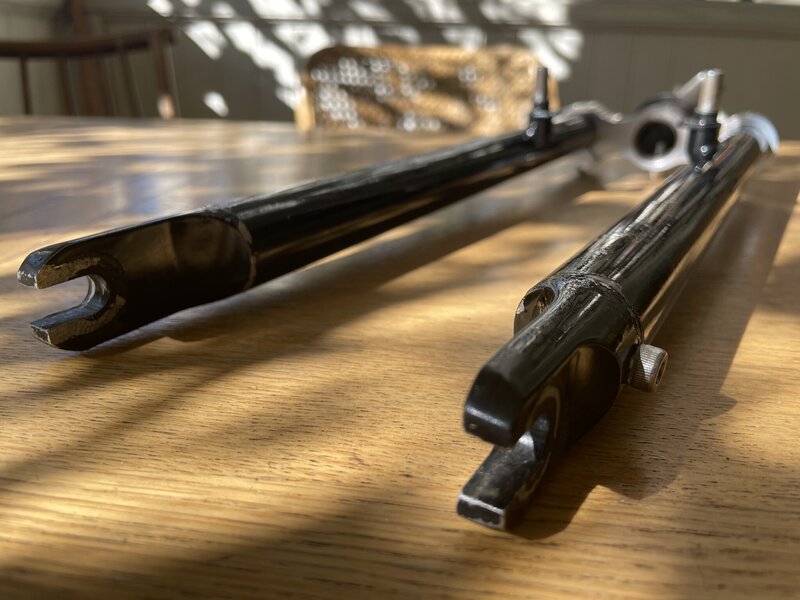 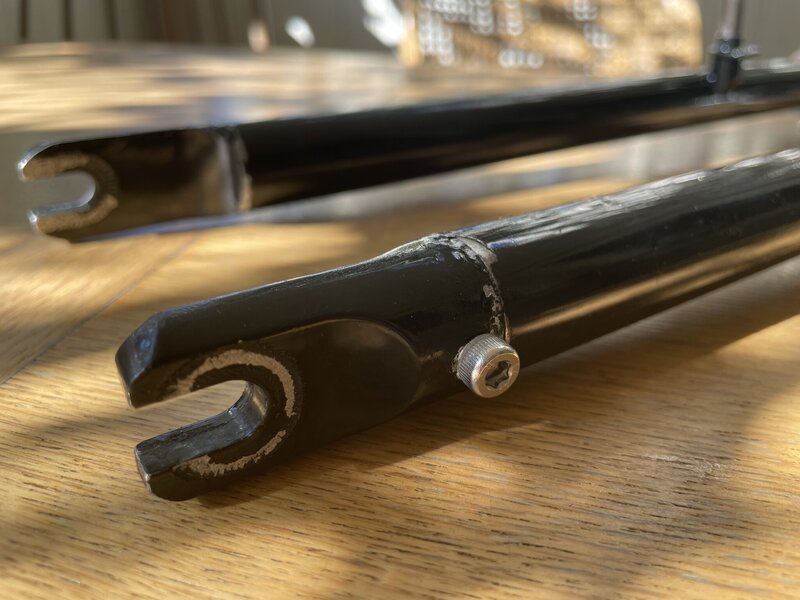 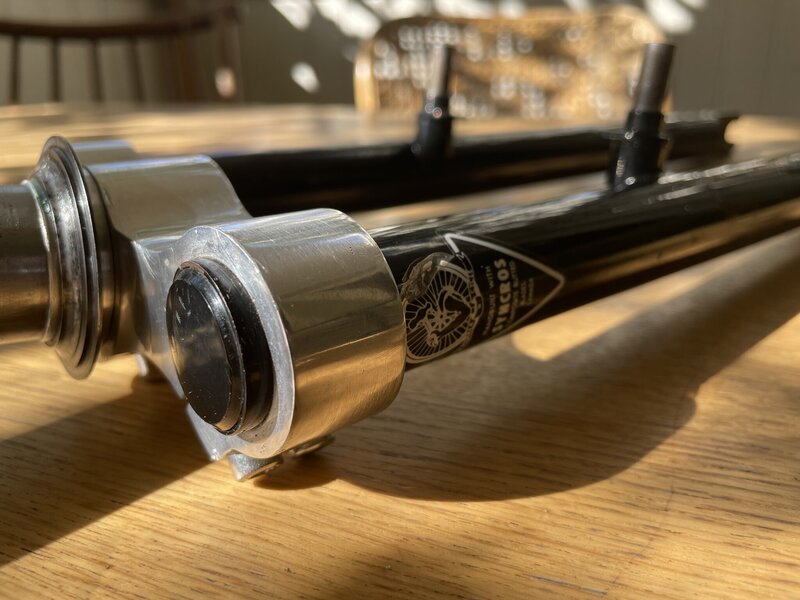 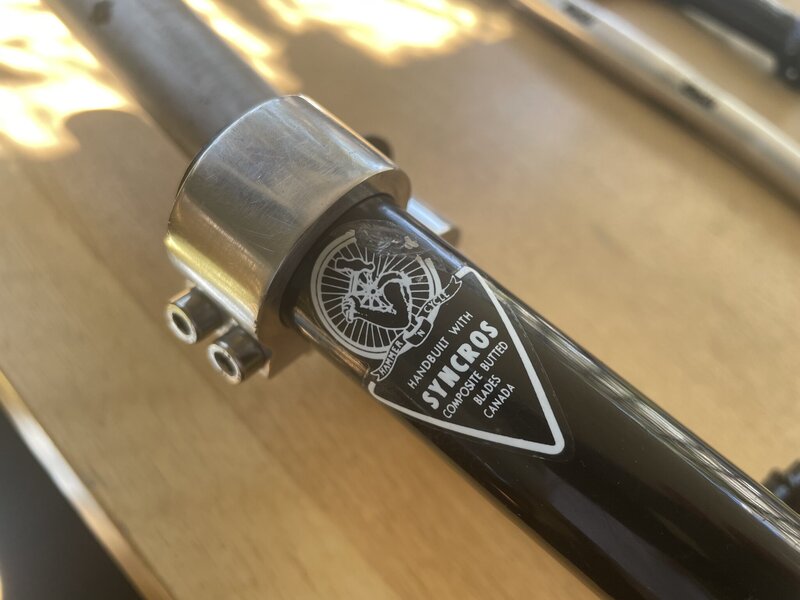 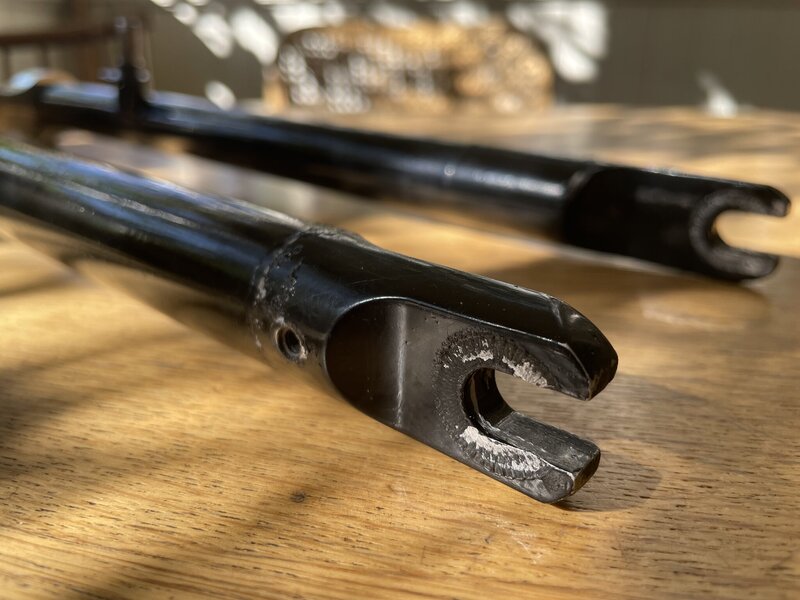 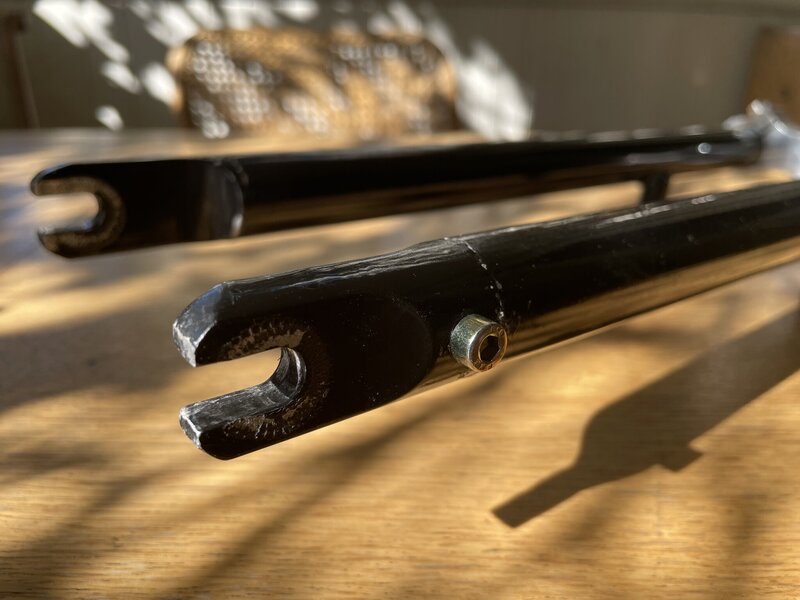 So what I do want to know is: Has anyone ever seen a set with that bolt threaded into the bottom section like that? I haven't, but admittedly I'm no expert. I have looked at dozens of other examples on here and online though, and have yet to clock another.

My assumption is that someone has drilled these at some point for rack mounts, or something similar?

Maybe? No chance? Did Syncros do a version that had this "feature"? I can't think of any other practical reason for that thread to be drilled and those bolts to be there, but maybe someone else can? I've removed (and replaced) them, and don't see any structural damage, but it does make me wonder: Could drilling these have compromised the forks structurally at all? Water getting into that hole, and having nowhere to go, for example.

Anything else look amiss to anyone? The paintwork is a bit peely, admittedly. Especially around those lower sections near the bolts (maybe even some slight worming), which makes me a little curious/nervous. But I've seen worse and I don't mind them showing some of their battle scars and I don't see any immediately worrying signs of rust.

I don't plan to strip them and have them repainted, that's for sure. Not unless for some reason I have to. And I'm on the fence about even adding the lowerleg Syncros decal. Did they always have the extra branding down there? I quite like this slightly more stealth version!

Anyway, thoughts and opinions all welcome. It's hard to find too much out about Powerlites in the first place, and I don't believe they appear in any of the Syncros catalogs posted online? In fact, to my knowledge, they only show up in a couple of old ads. Can anyone date this particular version for me? I'd love to know. They don't have the polished silver dropouts, so that must mean something...

Have I missed anyone? Someone else with a Brodie, or a Rocky, or a Syncros obsession?
Last edited: Aug 4, 2021

pw_pw_la said:
Nobody out there, huh?
Click to expand...

Give us a chance, we’re used to just looking at the pictures and only reading the occasional one line….

Peachy! said:
Give us a chance, we’re used to just looking at the pictures and only reading the occasional one line….

Fair enough. I do tend to ramble on...

i had a set of legs that had the rack mounts at the drop-outs like that and i've seen maybe one or two others pop up. i sold off my set in favour of trading up to better condition forks that i've kept and built bikes with. fairly sure the rack mount eyelets were factory done, but not positive. very uncommon but not a one off.

you'll have to do a little bit of digging to find them, but i'm sure i posted a few pics of the one i owned if you want to compare.

Cheers @RockiMtn! That's actually really good to know, and puts my mind at ease quite significantly.

I'll keep digging for comparison/reference, just to see, but that feedback is very welcome.

i found where/when i sold it. it was sold together as a Cirrus frameset. oddly the rack mount point is near the dropout on the legs, as opposed to being on the dropout itself. 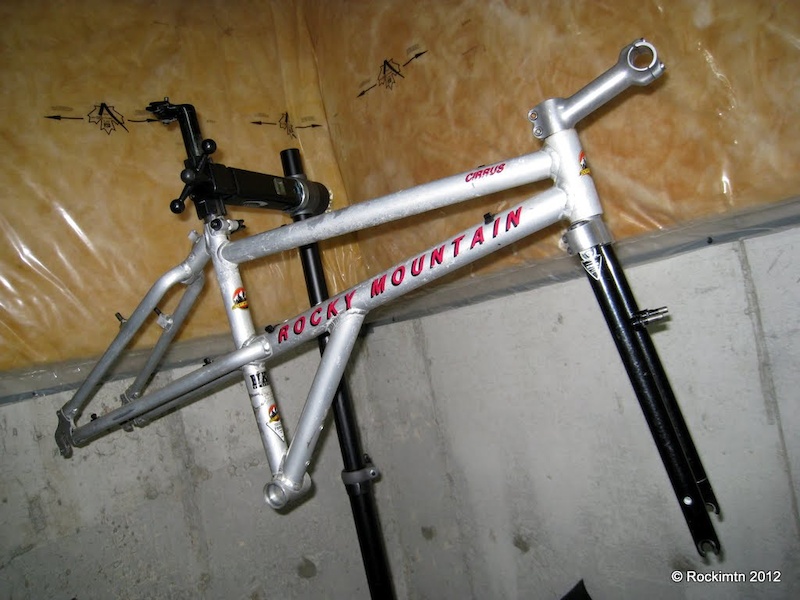 personally i wouldn't strip repaint it. it looks to be in fairly decent original condition, and especially since you have the original decals at the top. are they on both sides?

the lower leg Syncros decals weren't obligatory so i wouldn't really be bothered not having those unless you really like having them.
You must log in or register to reply here.