Johnboy said:
Wow, beautiful. The Suntour groupset in that condition must have taken some time and expense to get together. I'm talking from experience, your component choices are very similar to the ones I chose for the Biria in my signature.
Click to expand...

You know, it wasn't cheap-cheap, but compared to the prices things go and are going for right now, I actually got really lucky with it. As I said earlier, the bulk came from one seller, and was taken off a Paramount I believe. Really low, if any miles. I don't remember the exact cost but certainly well under $500 including the wheelset and all the major components. The pedals were just the cost of labor to pickup and ship a bike to someone else. The headset wasn't cheap, but I got it cheaper than they've been going for of late. I even managed to find a matching XC Pro seatpost in the right size, but I didn't love it on there, and it's a tad scruffy. As well as the champagne brake levers. Those were also relatively cheap, as they were listed on eBay poorly with bad photoshopped photos, and I took a punt.

Anyway, all in all, I feel very grateful for getting pretty much the entire group at a relatively reasonable outlay, and without too much headache in tracking down. It's certainly nice to know I have the whole group now. It was really only the headset I had to be patient for. And now I've got two and half of them, as I just picked up a 1" version for the parts bin on the cheap!

benjabbi said:
That has come out rather nicely! Looks great Phil.
Click to expand...

Hopefully most of it looks just as nice (ideally even nicer) on this OR...

Okay, so a little update.

Minor changes, maybe, but some significant ones nonetheless...

1. The first proper off-road ride resulted in the chain fouling during shifting, and when I looked down the granny ring was wobbling around precariously beneath me, all twisted out of shape! I really have no idea what happened, but after removing it, bending and twisting and banging it back into shape, it was still impossible to get the bolt holes to lineup correctly with the rest of the rings. I'm not sure if this was due to it getting so badly mangled, or if, for some reason, it was never the correct ring in the first place. Perhaps the bolt patterns were always slightly off and had been somehow forced inline? Regardless, a replacement was now needed and the only 22 tooth ring I could find with the correct BCD was a red QBP number from Gingineer. Luckily/happily it also came with ovalized bolt holes, which made installation and alignment a cinch. I originally figured this would be a stopgap replacement; I'm not the biggest fan of ano in general, and red is right up there with turquoise as my least favorite! But you know what? I kind of like it! 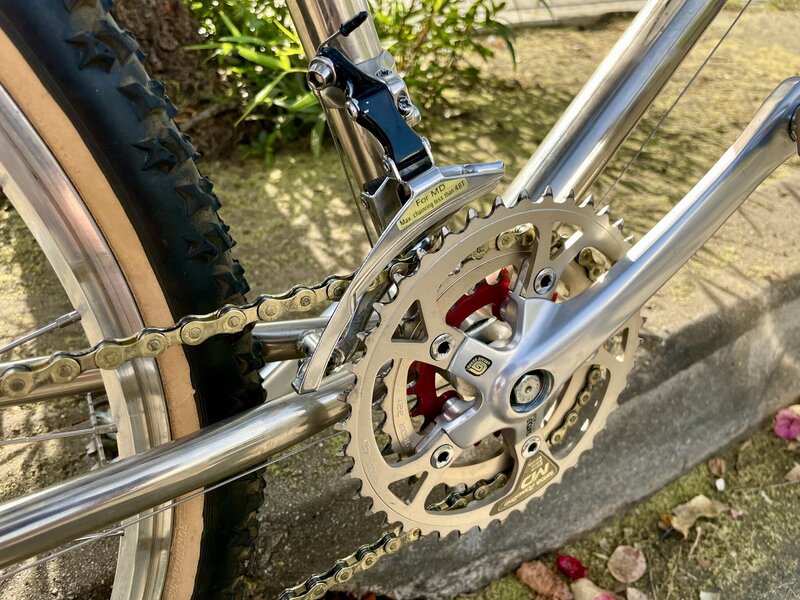 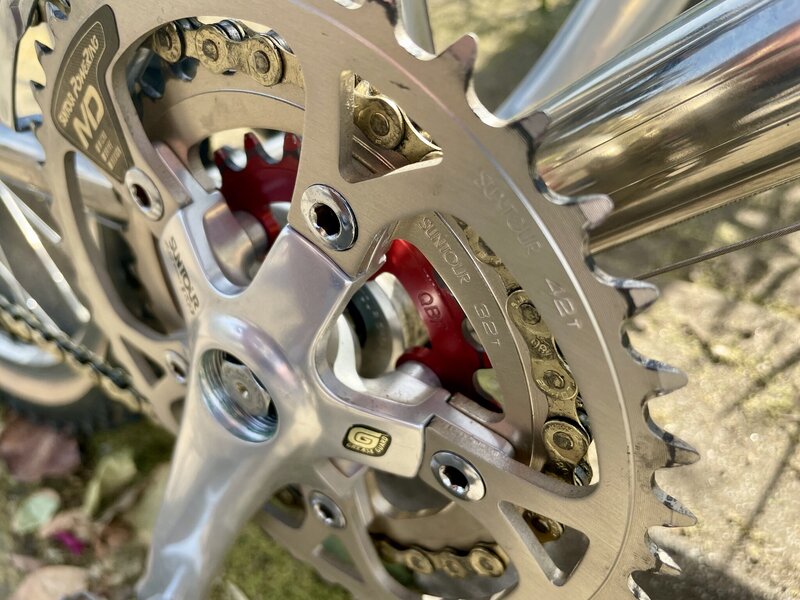 It's hidden away enough that it's pretty subtle, and it obviously matches the other little hits of red floating around the build.

2. Brakes. The Paul Crosstops were replaced with an NOS Scott Pedersen SE front, and (until I can source its matching partner) a Suntour XC Pro SE rear. These took a little while to dial-in correctly and are an interesting brake in practice. A little grabby at first, especially the Scott Pederson, they take some careful adjustment to get just right. Having ridden them a lot over the past couple of weeks, however, I've become more and more comfortable with the action and modulation, and, while they might not be my go-to brake of choice moving forward, they do work nicely (albeit uniquely)! The bike handles nicely now, and slows/stops well on both road and trail. 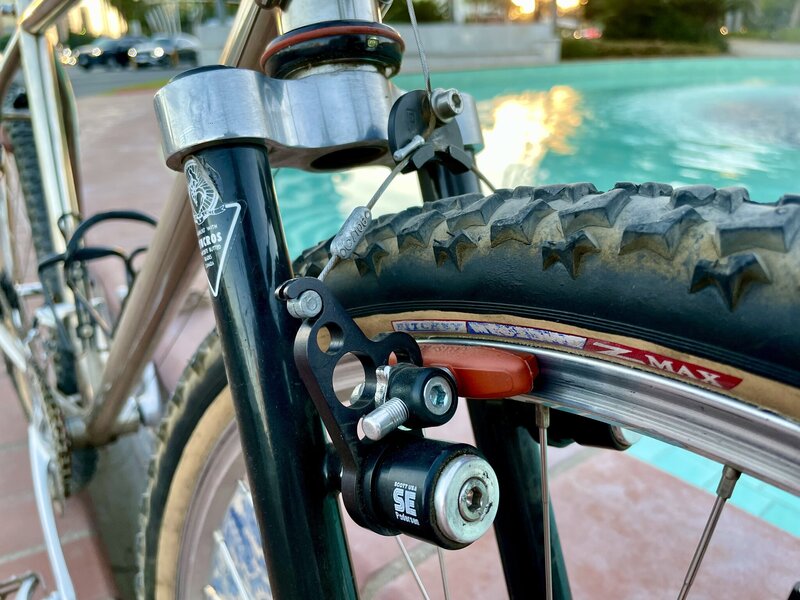 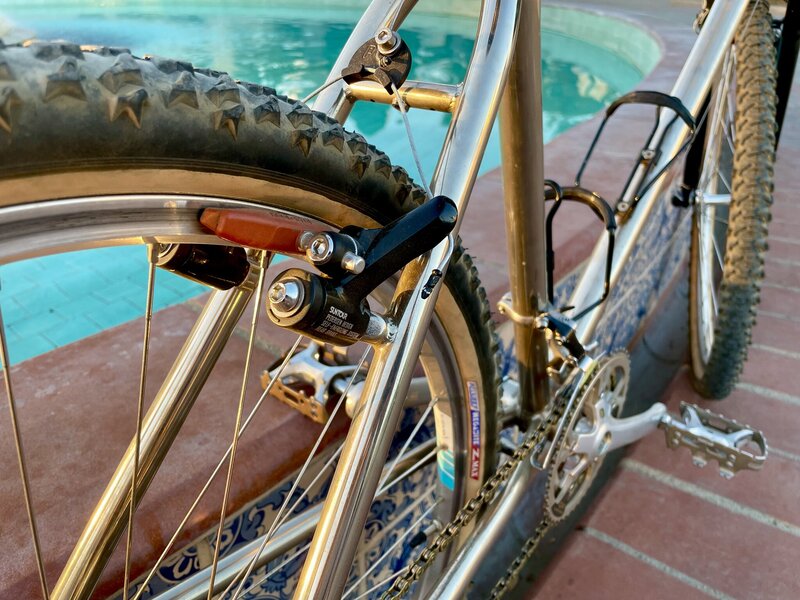 (Please excuse to mix-matched and mangled crimps... I was short a couple of black ones at the time of installation and plan to correct this grave mistake shortly!)

The Paul Moon Units were added for hangers, with a view to tying together the brake levers now the brakes themselves have been moved on. While the Scott pads were replaced with some brand new Koolstops, because, well, brand new pads are always the smarter choice for a regular rider!

The switch to cantilevers also meant my OCD was finally satisfied, as that rear cable stop was now in use: 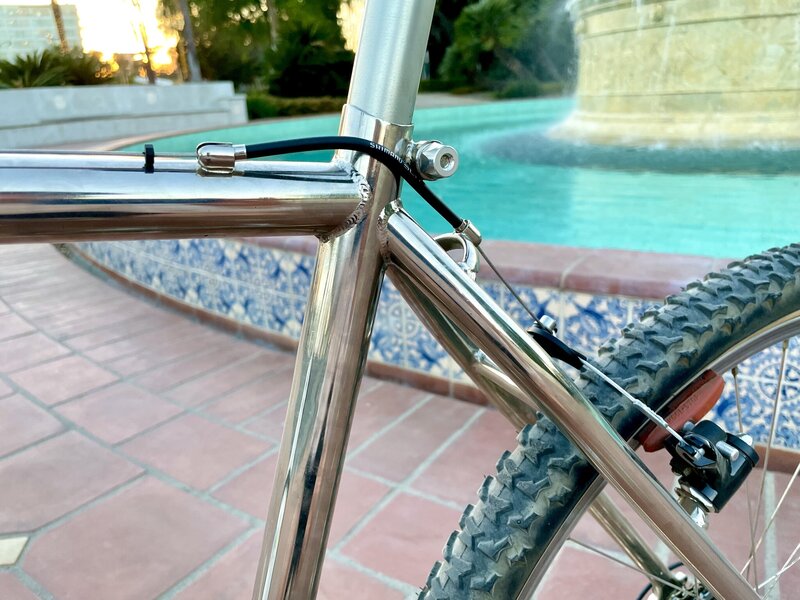 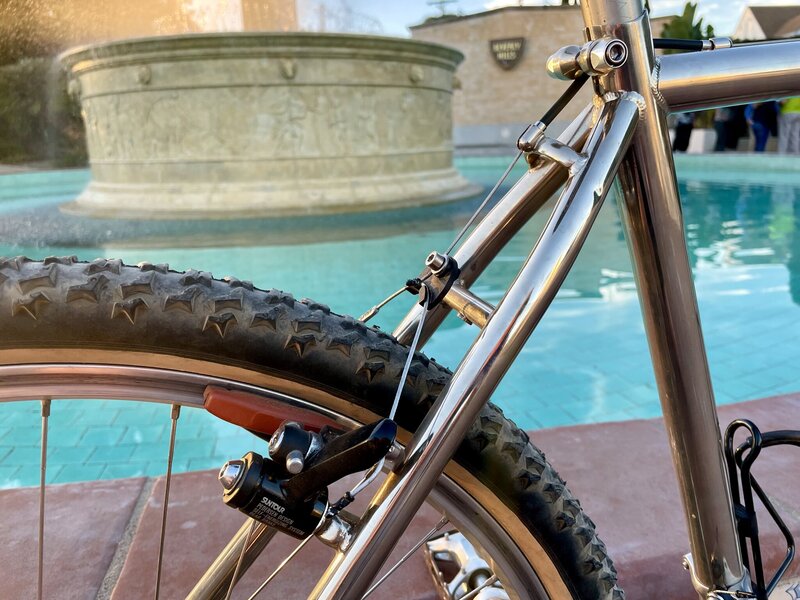 And I now had a reason to use the WTB repro cable hanger I'd purchased a while ago for the front: 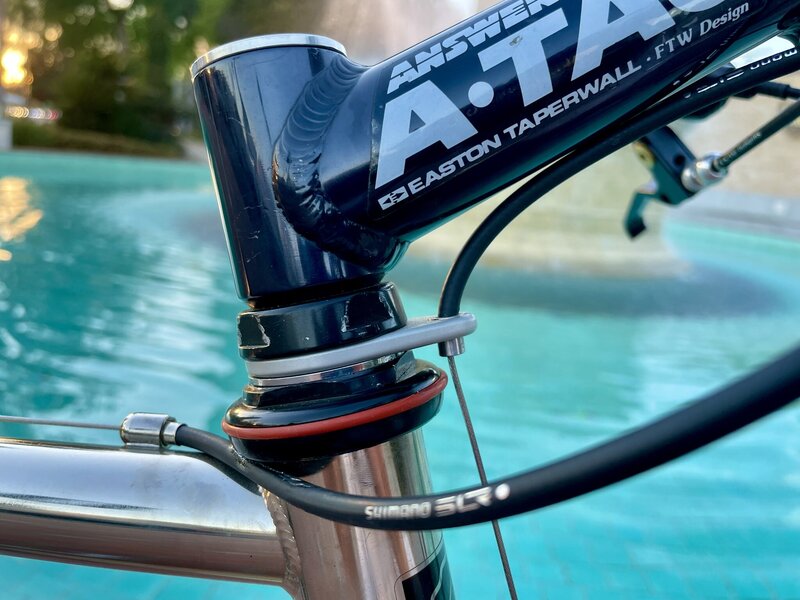 It's been milled to a 1 1/8" size, and while the cable comes in at a pretty harsh angle, I haven't had a problem with it yet. I may still order another in black, as the silver is a little jarring against the rest of the stack, but it's nice to have another piece of WTB-inspired tech on the build. That was a large reason for going with the Suntour Grease Guard group after all.

On the subject of...

3. The seatpost and saddle have been replaced with a matching Suntour XC Pro post and WTB Specialized Prolong. The saddle came from @Flow (along with the single greatest component I have ever purchased, for the Bontrager build), who reached out to my original wanted ad for the Phoenix. Thanks again Ken! And while I didn't originally plan to use it on this bike, the tan saddle was still bugging me and the little hit of red from the logos and the extra WTB kick really made the choice for me: 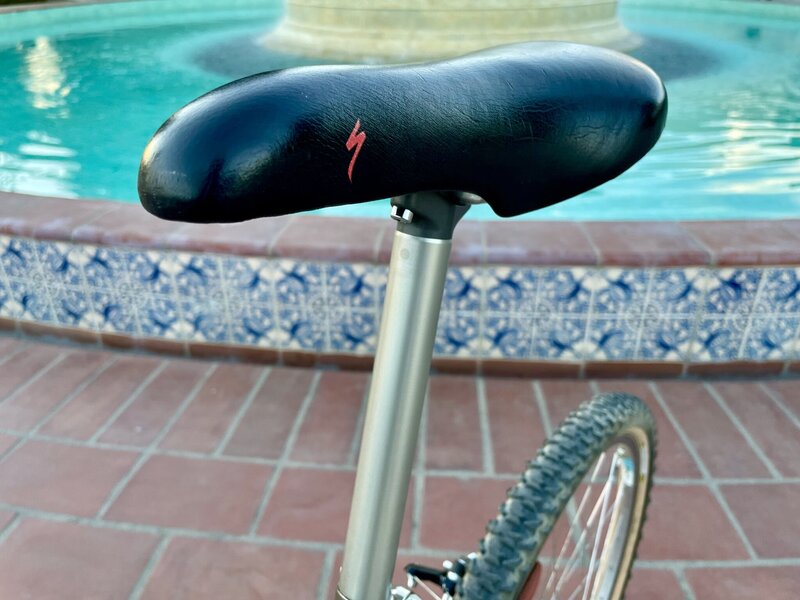 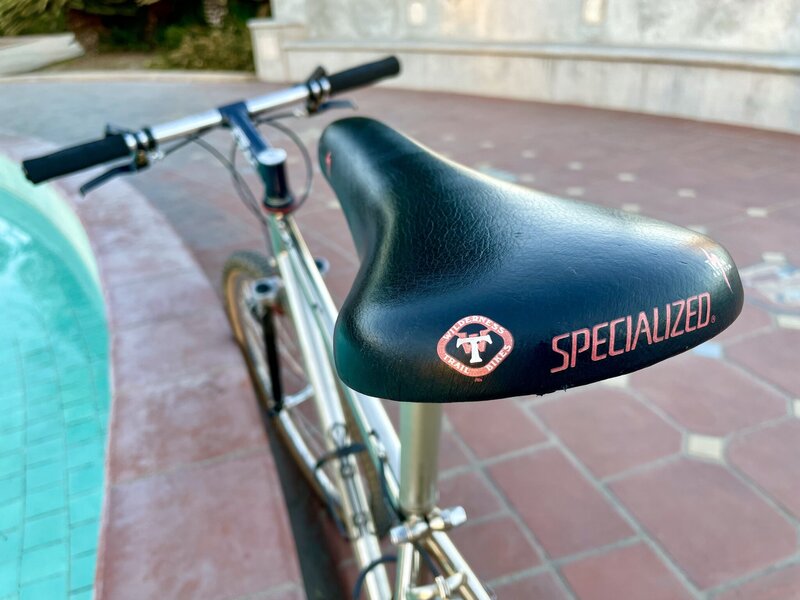 @raidan73 will hopefully be relieved to see a black saddle, but I wonder if the Specialized component and logo on a Marin frame is going to give anyone else around here an anxiety attack?!

Personally, I couldn't give a flying...

Having ridden this saddle a lot recently on the Phoenix I'm finding it hard not to become a little obsessed. I'm actually kind of worried (for my finances) that I'll end up tracking several more down for future builds. Honestly, it fits my arse perfectly! And in my opinion may just have the nicest profile of any saddle aesthetically.

It also just looks right paired with a Suntour seatpost! Which I'm much happier with on this build than the American Classic.
Last edited: Mar 5, 2022

And on the subject of American Classic...

You might have noticed the seatpost QR is missing from the photos above? Well, that's because the problem with old stuff is that sometimes old stuff just doesn't work! On a long ride recently it refused to hold the post firmly in place any longer, which kept slipping and slipping as I rode... 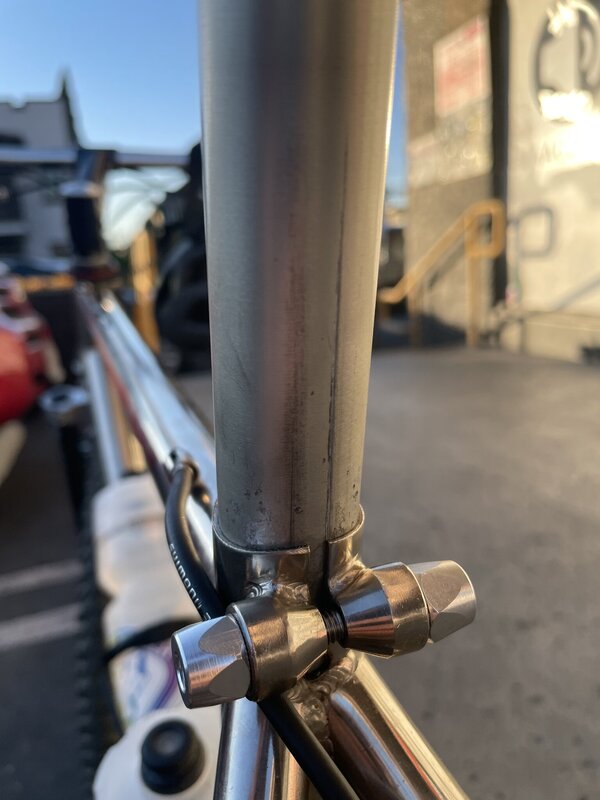 So now my lovely Suntour seatpost has a couple of giant gashes and scrapes along it's side and backside, from the sharp edge of the seat tube. 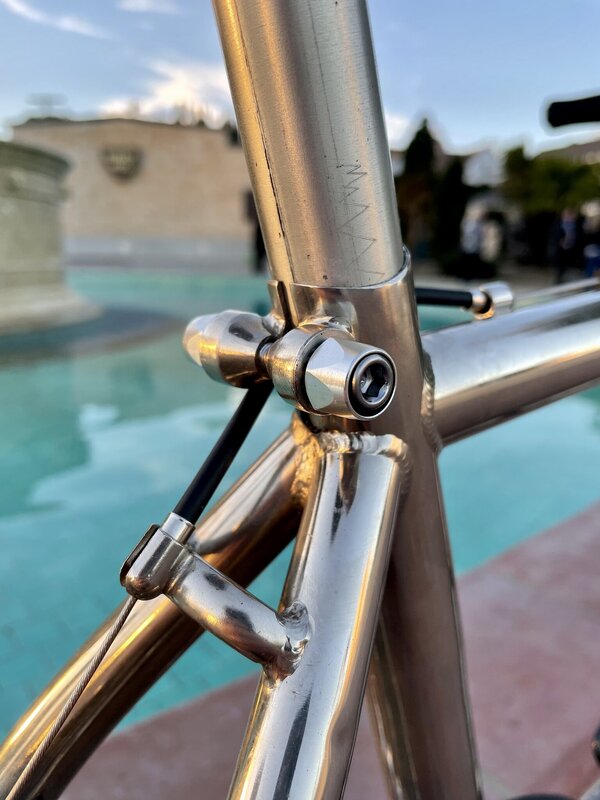 Oh well, the only thing I like more than minty old bike parts is beat-up old bike parts! A mid-ride pitstop at the LBS resulted in the cheap bolt-through binder replacement above. I think I'll keep a version of that in place on the bike, but will try to find a nicer (ideally period correct) one in black at some point.

Otherwise, some new rider tires aside, I think that's pretty much it for the time being. Until a rear Scott Pedersen shows up, anyway!

I'm really pleased with all of the above additions and changes, and now with the build itself. The bike feels fast on the skinnier Campy rims Ritchey tires, and while I don't take it out often on the more challenging trails, it's nimble and quick on both the climbs and descents on my local fire roads and singletrack. Yes, the build is a bit weird and all over the place, but I think it all just about works and is in keeping with the original concept I had in mind.

definitely better with a black saddle. The question is, after all the time and effort, is it still a doner bike?

That saddle is much better!

You need to find the matching Suntour seatpost QR it
You must log in or register to reply here.