Orange 🍊 Fan
So, I’ve been thinking about a winter project for a bit – as I’ve been tinkering with my bikes over lockdown and got to a point where I’ve kind of done what I wanted to do. My P7 is under wraps and I’ll post on it when finally done. The Clockwork is almost there, and my modern just doesn’t need any work doing as I’ve been using the P7 until it got resprayed. I tend to keep half an eye on selling sites, usually to see if there’s anything interesting that brings back memories – and also in my quest for final bits for the P7. Looking around this week I found an interesting bike a few miles away and thought it might fit the bill. Crap photos and collection only, so I figured it’d stay nice and low on the bidding.

I’ve always loved AMP full suspension – and this to me is a poor-man’s substitute. I chucked a bid in and went to bed. This morning I got the “you’ve won” notification. Hopefully I pick it up Saturday, so this is the first instalment of my Kona Sex One Education.

It’s a 1995 Kona Sex One, so the lower specced of the two sexy bikes they made – but still some decent functional kit as it is STX/LX. Marzocchi F&R shocks.

The ebay listing had four pretty awful pictures, so I’m gambling from the off (oooh, exciting!). The original Marzocchi’s have been replaced with some Pace RC36’s by the looks of it, and they have quite obviously collapsed. I’m hoping this will just need some new bouncy bits. Shame in some respects as I love the look of old Marzocchis, but I suspect they were pretty awful to ride. Front wheel may well be non-standard, and the gripshift that I can see in the pic looks a bit new. I hate them anyway so they’ll be finding a resting place in the parts box while I get some DX thumbies sorted. Aftermarket skewers are likely to be halfords specials but who knows what might lurk behind the grainy pics – maybe some unobtanium super-specials that I can flip “’cos retro innit”. Might be a bit of damage to the paint, but frankly who knows.

Oh – and I have no idea what size it is, but it looks like it’ll fit. The linkages could be goosed. The shock may be stuck. I’ll just have to find out. For what I’ve paid I’m willing to take a chance. Worst case is it’s too small, gets cleaned up fettled and moved on.

So, the dice has been rolled… next update on the weekend RB’ers 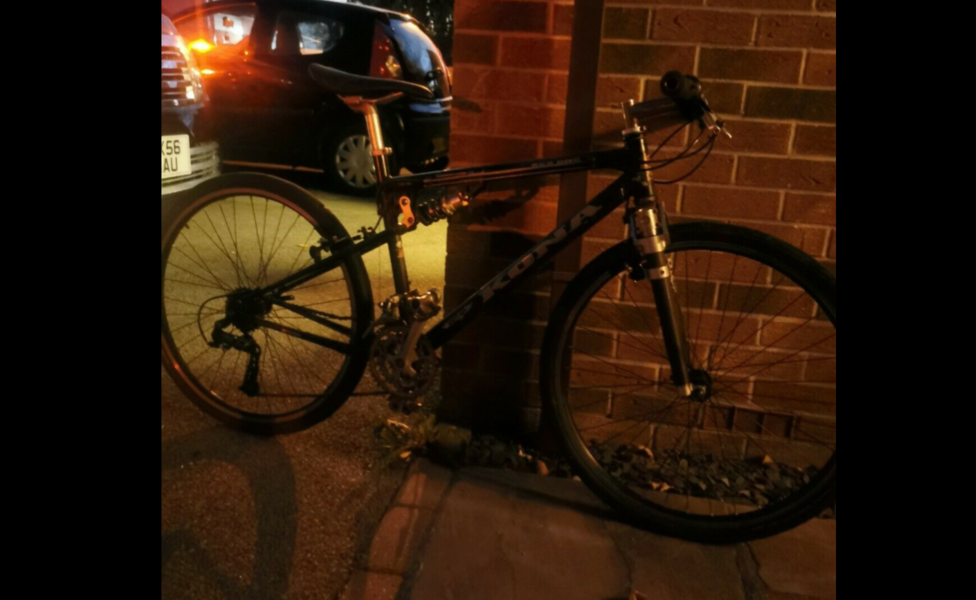 Yeah, good price. I was watching this also but had to go out so missed the end. Looks like the 18" and should be an easy fix as long as the post moves etc.

Look forward to seeing pictures when you get it

Orange 🍊 Fan
So, I’ve picked it up. Have lobbed it in the garage til the weekend.

First impressions. It’s filthy - I mean absolutely disgraceful. Wheels are cheapo Quando that will need to go. Rear mech looks modern, shifters have been replaced. Forks move so that’s positive. It is however surprisingly light, and also really quite tiny. Might have to be one to fix up and move on - but we shall see.

Need to give it a Damned good clean so I can work out what I have and what needs doing. Pics to follow on the weekend.
Last edited: Oct 15, 2021

Orange 🍊 Fan
Hmmm. While it isn't quite in lemon territory, it is very evidently a 26 year old bike.

It needs to be covered in degreaser and given a good old wash, and then to check for cracks. This will be done on the weekend with some before and after pics. However, my immediate observations having given it a once over in daylight are:

Frame : "Used well" but looks straight. Shock moves (whoop!) Paint is what I'd expect for 26 years.
Bottom Bracket : wobbly. Probably original. Bin-fodder. Will pop it out and have a look though.
Seatpost : Nasty scratched heavy old Tahoma thing, but isn't stuck - which is good.
Seatclamp : bolt thread has been stripped. For the bin. Shame, as the original ones are lovely.
Rear Mech : Modern Acera. Functional but yuck
Shifters : I hate gripshift, and they don't match, so one has been replaced. One way bin-ticket.
Canti's : Black LX F&R - but somehow one arm has had the cable end retaining slot snapped off. One functional set can be made. I mean, really? How?
Wheels : Quando specials. Really good nick, but soon to go on Marketplace for local collection once I've cleaned and determined the provenance of the cassette
Pedals : bearings absolute toast.

Forks : Look in really good nick, rocker is present. No decals, which is a shame. However they move up and down too freely. Hoping it actually has some internals and it's just got no elastomers...
Velocity Stem is good, save for peeling sticker.
Saddle : Charge Spoon - not sure what the dirt is hiding though.
Kona bars are lovely, with some funky internal butting. Uncut, but still properly narrow!
Impact Headset seems buttery smooth
Rear Shock - looks to work, which surprised me immensely.
Brake Levers - High Command (I think) and in decent condition, with the little threads drilled in the ends for bar end extensions.

It does however seem ridiculously small, and I think will be a 16. If the case, then its too small for me. Next update after the weekend

Looking forward to the update !

Orange 🍊 Fan
Righto, so this morning I got a good look at what I’ve got. What is blindingly obvious is that it is too small for me, which is quite a shame.

Nonetheless - it’s pretty much as in my last post. The frame is aluminium and no cracks that I could find. The welds are pretty industrial so I would have been surprised. The shock moves and it seems to work as designed, which is good.

The rear triangle is steel and has a good amount of surface rust. The brake rocker is intact and working fine. LX cantis are actually fine F&R which is nice. Schwalbe City Jet tyres have little use and the Charge Spoon is scuffed slightly but absolutely fine.

I’m going to take the forks apart in the week and see what the craic is with them. Superficially they are in pretty good nick apart from missing stickers. 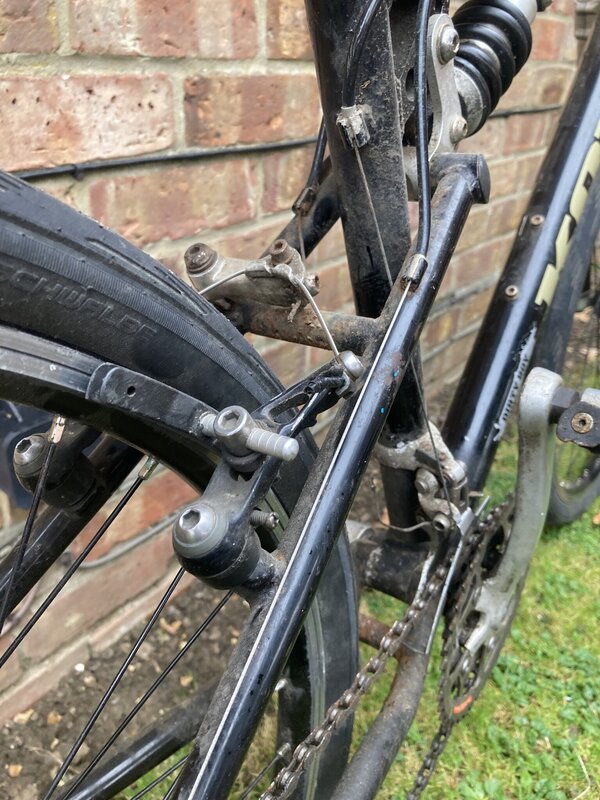 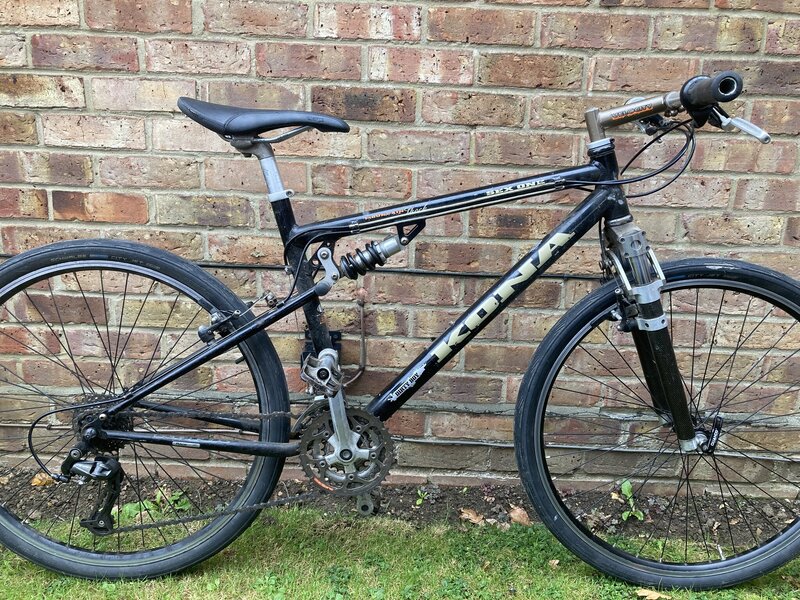 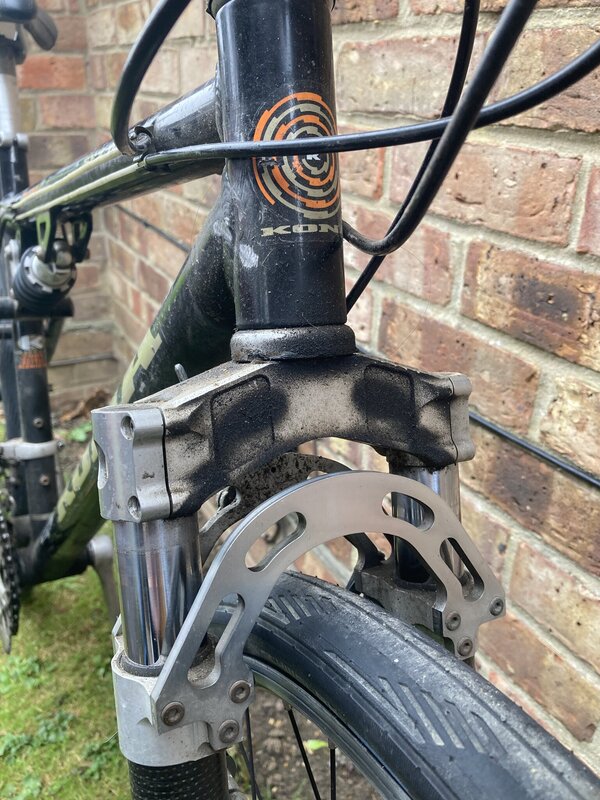 And after. The drive side Kona sticker pretty much fell off at the slightest hint of a bucket and sponge. 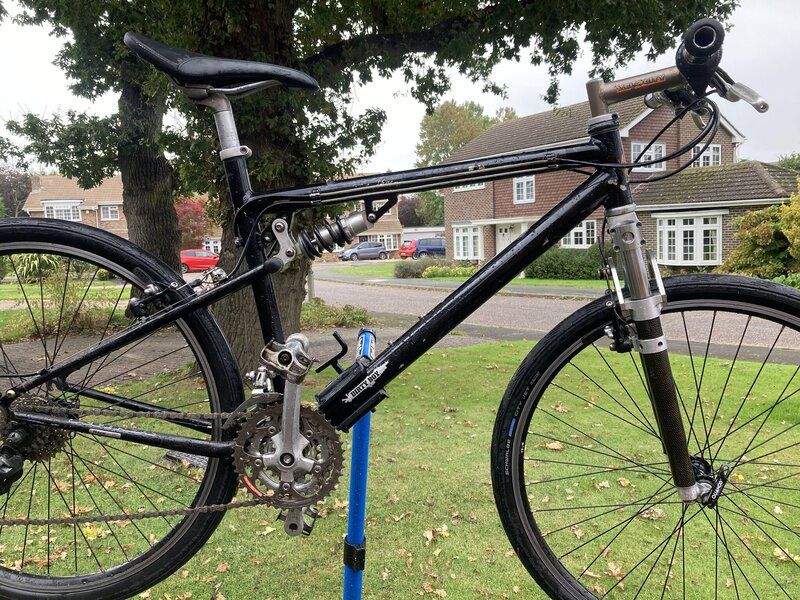 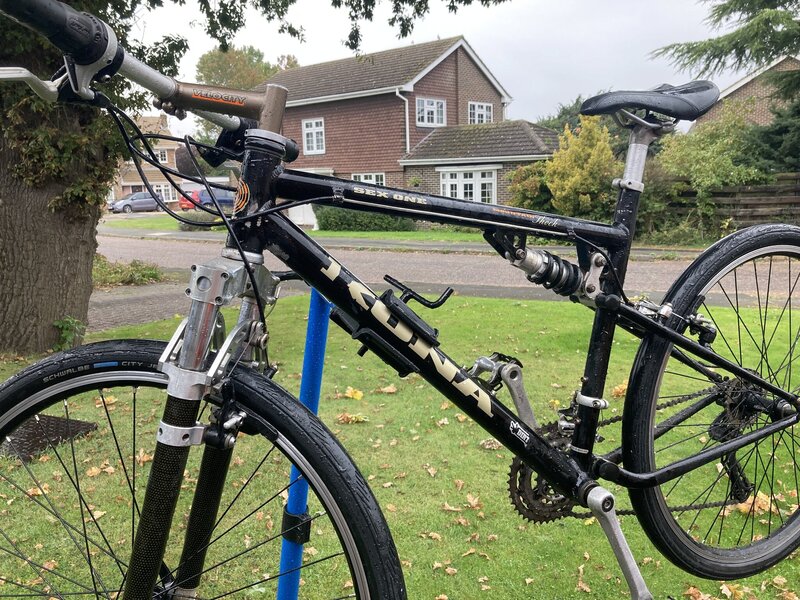 So I’m in a pickle. It’s too small, and needs a bit of work - but the work but was part of the plan. It functions fine (save for the forks) and as such I’d feel bad to part it - however this is my first foray into a project and think I aimed too high. Plus it was always going to be a bit of a gamble. Tempted to part it, try and recoup my money and start again.

Shame about the decal, strange too.

Orange 🍊 Fan
I’ll check the measurements versus the catalogue but against my 18 inch P7 it is really quite small.

Next step will be to get into the forks and have a look.

The bars have some really cool butting - funky for a factory bit of kit.
N

I picked one of these up last year- Mine came with XTR V-brakes, not sure if that's stock or not... I added the Race Face seat post, flite seat, and Race Face crankset, and smoke and dart classics- but this is how she sits now basically. This is also an 18" ( I believe).

Edit- I need to add, I hate how Kona painted this stem brown. it doesn't match anything, should have just been black. 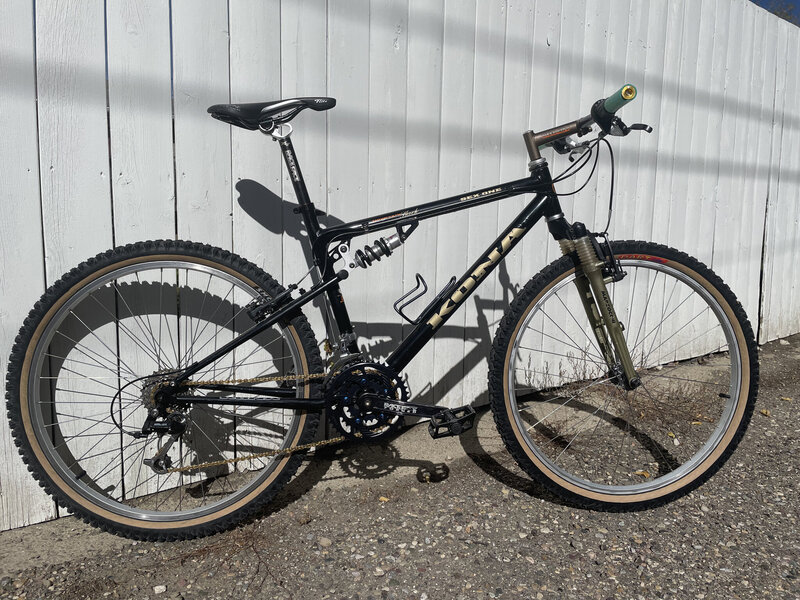 NigelFinnighan said:
I picked one of these up last year- Mine came with XTR V-brakes, not sure if that's stock or not... I added the Race Face seat post, flite seat, and Race Face crankset, and smoke and dart classics- but this is how she sits now basically. This is also an 18" ( I believe).

Edit- I need to add, I hate how Kona painted this stem brown. it doesn't match anything, should have just been black.

Nice bike, the v brakes are not stock no, they were released in 96, and the stem matched the P2 fork of the same year.
You must log in or register to reply here.

*maybe not a Raleigh Dynatech Odyssey

B
Good to be back!