Repack Rider said:
A long time ago my late friend Pat Reddix started this venerable thread. When the now deceased magazine Privateer came to Northern California, I was not available to guide them, and for better or worse, I turned them over to Pat. I found the article today while working on the Mountain Bike Legacy Project and I scanned it into a .pdf. that is now on my website.

I think of Pat each time I turn down this road (see photo) on one of my regular rides. The first time I did that ride, I was faced with several near-identical looking roads and I wasn't sure which was the one to get me where I wanted, but when I saw Fairfax Drive, I thought that's the one to try, cheers Pat, and it turned out right. 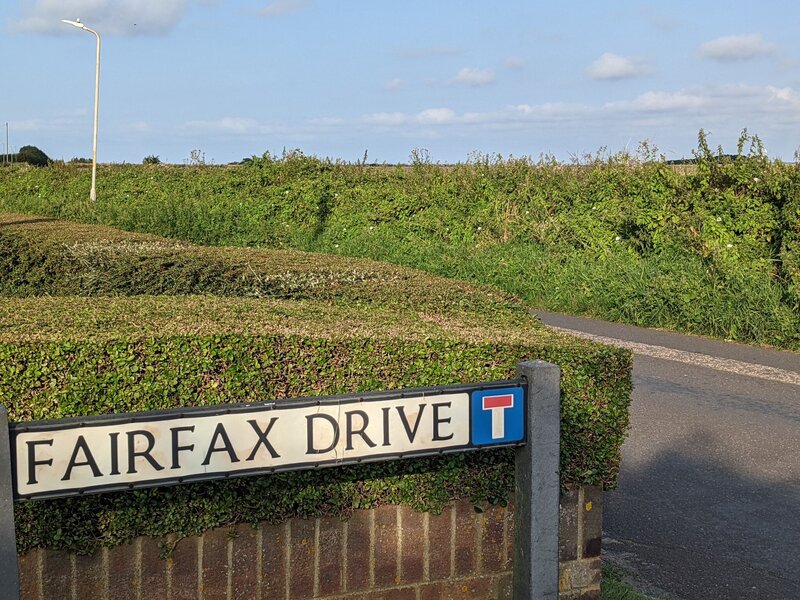 Today's ride: 41 miles, about 15℃, sunny to start, raining for the last half-an-hour. I was going to take the Ridgeback which is riding sweetly thanks to a new bottom bracket and new jockey wheels, but I'm riding that five days a week as it is, so I decided on a road ride. I'm enjoying the ride to Sandwich at the moment, so I thought I'd head there again, but a little bit further, to Sandwich Bay. I didn't stop for many photos, but these guys looked worth stopping for: 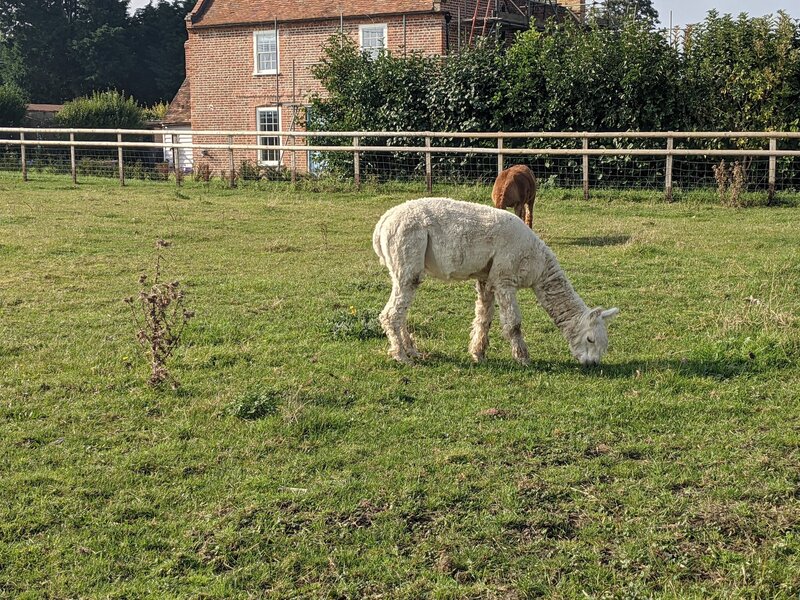 However, I think it's fair to say that they were a lot less interested in me than I was in them.

Sandwich Bay, itself, is a peculiar place. It's right next to Sandwich's famous golf course and it's a private estate, owned by the residents. Cyclists get in free but drivers have to pay £7 at the toll booth to drive in. It's five minutes' ride, then, to the beach, past driveways littered with German luxury 4x4s. The average house price is probably about £1.2 million but it's a bit Stepford Wives. It reminds me of Confucius's saying, that those whose actions are guided by self-interest will encounter much ill will. I get the feeling that quite a lot of self-interest has been associated with this place and I don't much like it. But the beach is lovely—Ramsgate is in the distance: 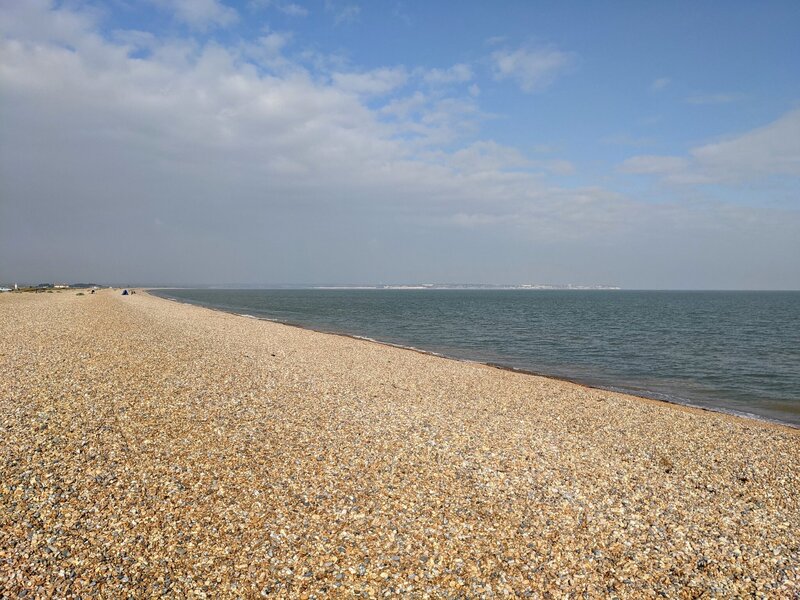 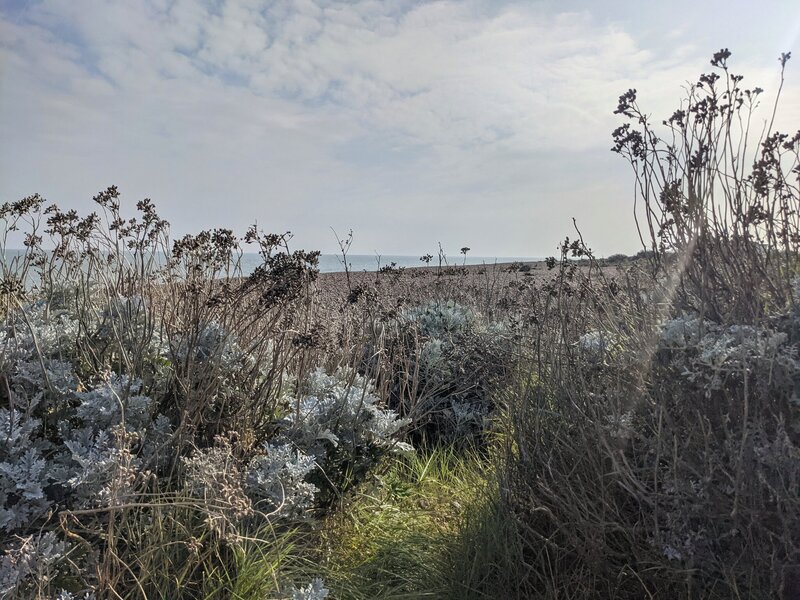 Yesterday's ride was a humble 5 miles. This time to Swinton Lock, also known as Waddington's, as it's behind the boatyard. This lock is normally only accessible by boaters, unlike the other lock I tend on a Saturday.

The barge in the photo is one of a pair. The other called Confidence. If you look closely you can see that she is indeed a 'cut and shut'. I'm not sure of the displacement but I believe it's getting on for 500 tonnes plus. She and her sister were built to transport components for a power station. Task completed, she has remained tethered here for upwards of 20 years now. Her sister is in the boatyard behind.

Slipping out the door, into the cool air as the sun began to rise. Took the 98: like slipping into a comfy armchair.

I've not posted for a couple of days as I've not been feeling quite right. I thought I could push through it, but I'm not 20 years old any more. This morning felt like I shouldn't, but I did. Foolish.

I had a positive LF test this morning and, understandably, got sent home. I didn't ride back as I couldn't face it (so I must be ill). Honestly, I really don't know how I managed to get there this morning.

I've been tucked up in bed since about 3pm. I feel pretty awful. Whether it's the real deal I'll find out tomorrow.

The tunnel under the tracks at Mexborough in the rain from Tuesday.

Update: PCR result came back positive. So I have Covid-19 and won't be posting for a while.

I decided to try a different ride today, to Perry Woods, a local nature reserve. There's a ten mile loop to be done around the woods but I know it mainly as the place many of the kids go to practice jumps on their Carreras. It was 15°C but with a chilly, blustery wind. The Stumpy was tempting me but I took the Ridgeback instead: it's been my commuter for the last six weeks or so and it's a real pleasure to ride. Ridgebacks of the mid-nineties don't get much love, perhaps because most were targeted at the lower end of the market; perhaps because, like Dawes, the brand wasn't considered cool, but this 705RS, although it was never going to set the world alight, is a cracking little bike. Quite stiff, responsive, nippy, comfortable.

Anyway, the ride to Perry Woods, took me through the little village of Chartham, the quaintly named but, today, windswept Old Wives Lees, and lastly, due to a wrong turn, Shottenden. Most of the orchards have now been picked but there was some hop picking going on. It's real Garden of England territory. 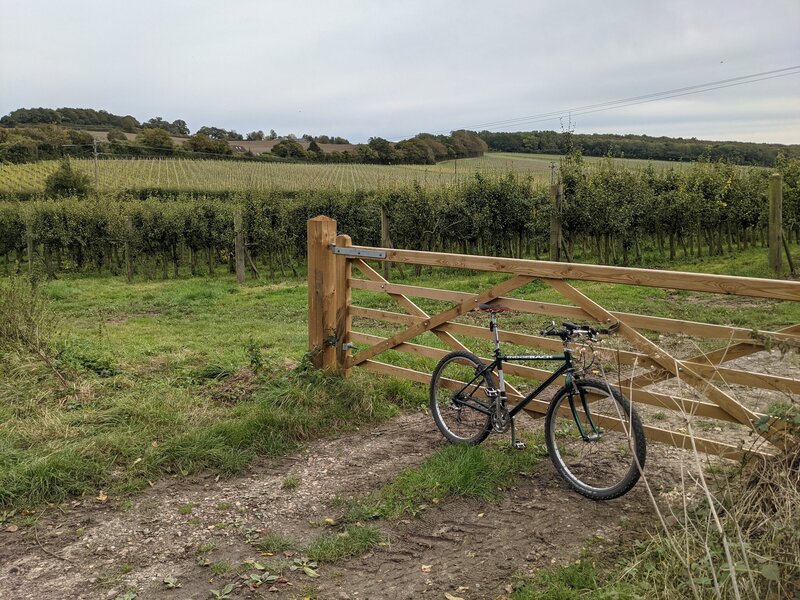 However, I had to stop several times to study the map and, even then, took a wrong turn. It was all taking longer than I hoped. Nevertheless, I reached one of Perry Woods' car parks and sat down to munch a cookie and figure out where I should be going to follow the 10 mile loop. 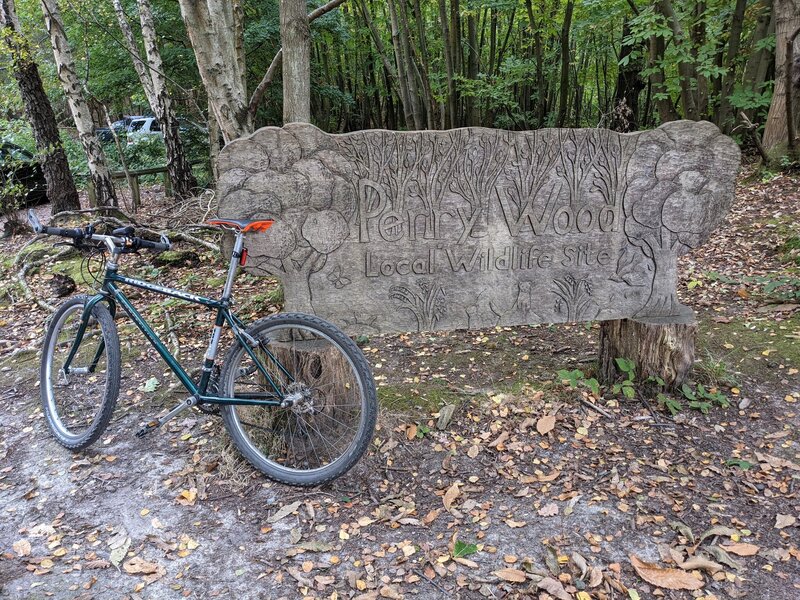 I was hoping there would be a friendly sign saying something like, 'Cycle loop this way', along with an arrow to follow, but was there? Hell, no! Instead, there were some stern warning signs saying, in effect, 'Don't ride on anything here that doesn't explicitly say you can ride on it'. Further study of the map revealed that the start of the trail was just continuing down the country lane I'd turned off to stop at the car park. So, I rode along that for a while, noticed no more signs and decided I really couldn't be bothered to do a ten mile loop, stopping every mile or so to study the map even more. Lunch and mowing the lawn started to seem very appealing. I decided to head for home but via a slightly different route, taking in the village of Chilham.

The centre of Chilham is a market square with pubs, a tea room, a church, and Chilham Castle at one end. It's picturesque but the market square is used as a car park and black Range Rovers kind of detract from the medieval vibe. Some wooden dudes in Chilham village centre—not too cheerful-looking. Perhaps it's the Range Rovers . . . 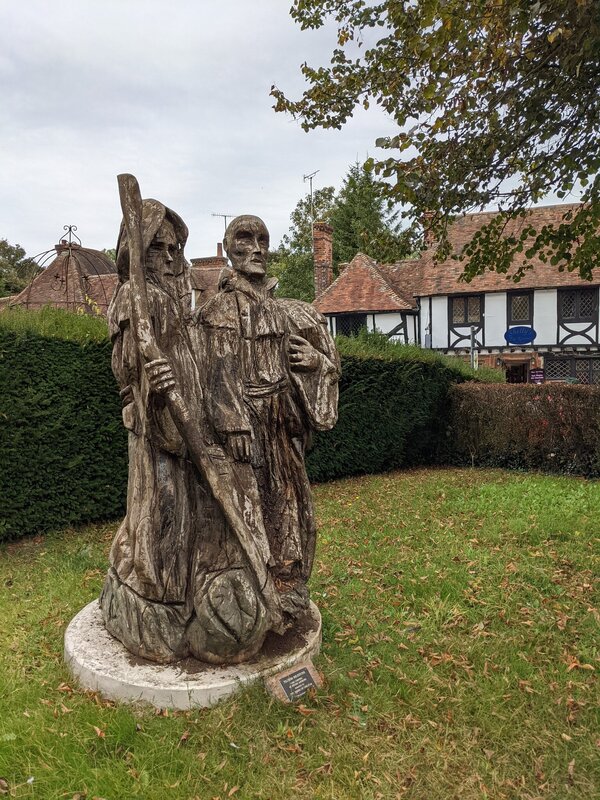 Chilham Castle—usually, I see this in the distance, from Catha's Seat, on my way to Wye, on the other side of the valley.

Leaving the Perry Woods loop was the right call for today. Lunch was good.

Really warm today, despite what it looked like out the window. Warm breeze which was welcome, along with a short shower.

Slightly longer ride out today than of late, ended up going around a wood or two, some trails were really overgrown and unrideable, while others were starting to get their leaf cover. 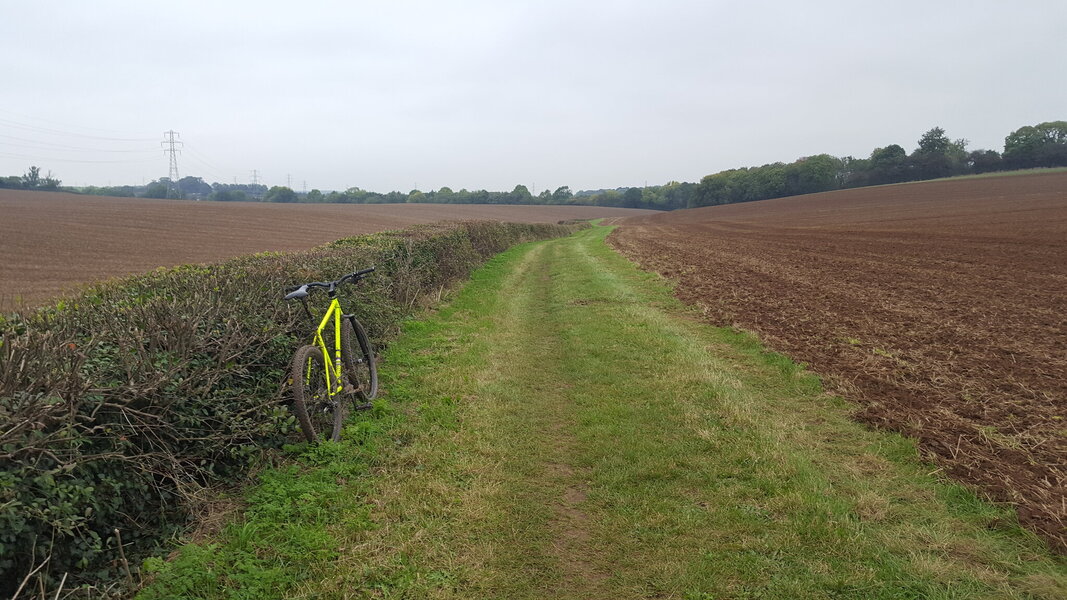 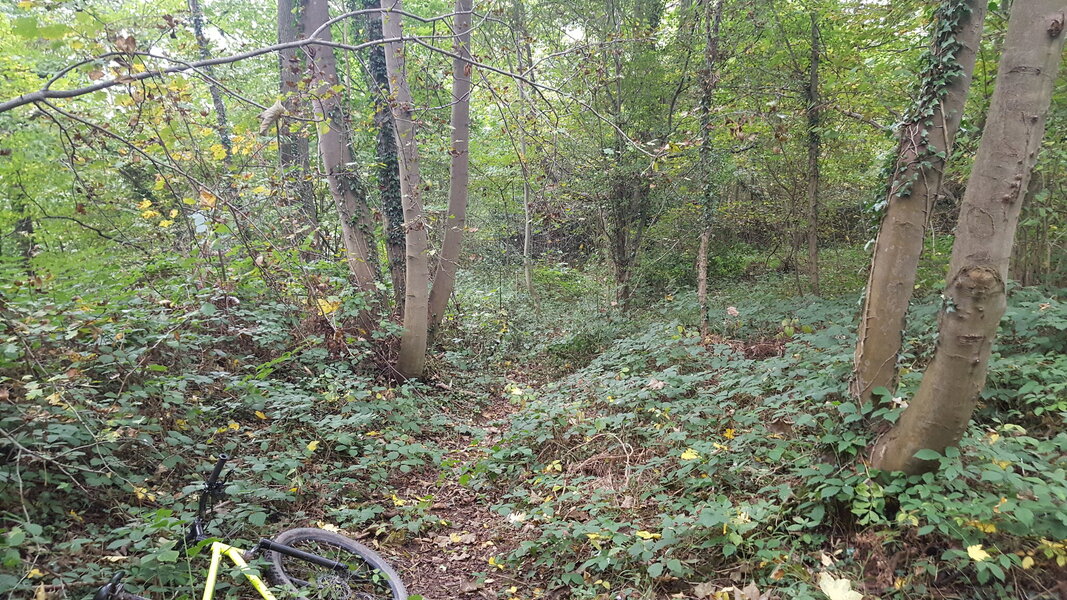 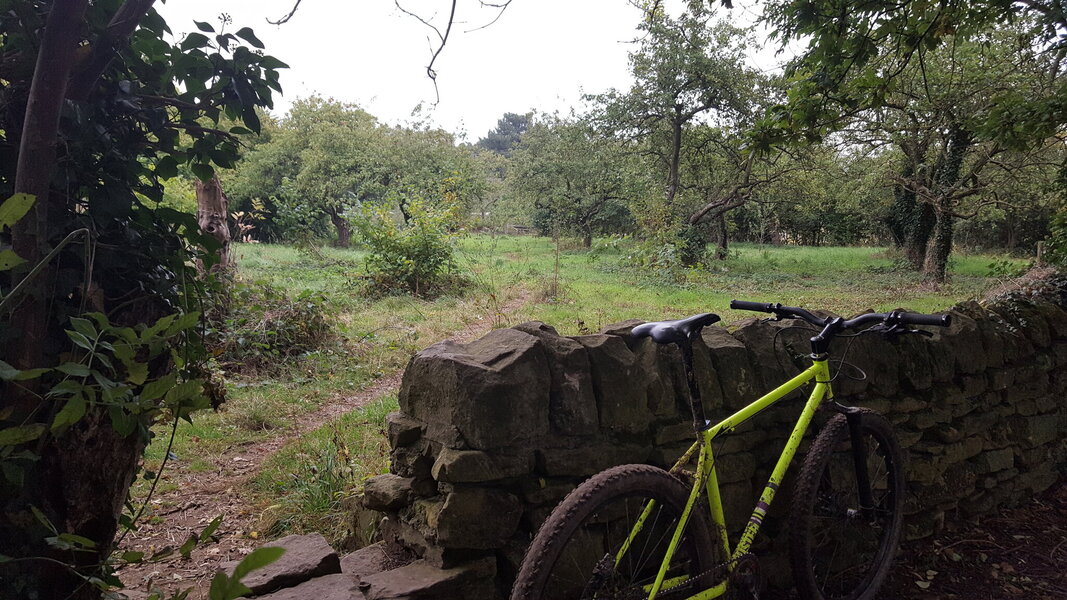 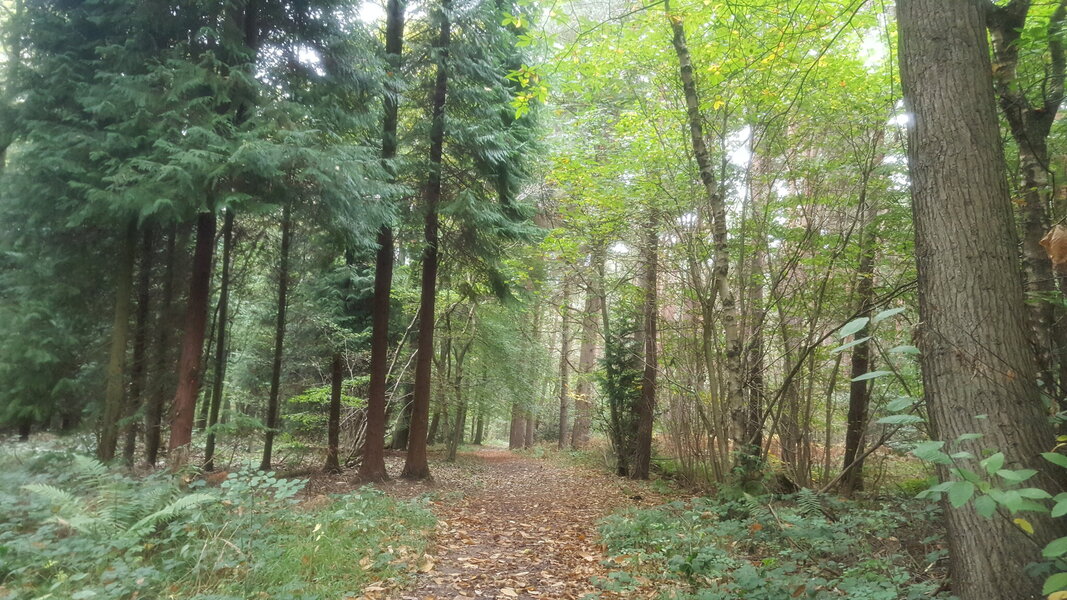