Marin Fan
So long story short this was gifted to me by a friend as he has too many projects (so do I really but always room for one more). I'm a bit confused on year because it has a canti hanger and boss mounts but also has a disc mount.

Plans wise it's going to be a bit of a parts bin special because that's all I can afford and it's too big for me to do anything really top notch with but I've always had a soft spot for Scotts and might be able to use it for touring . What would the original spec have been? Would it have been threadless or threaded forks (rigid/suspension) etc? And am I going to be lucky and find it's a common size seatpost or a weird size? Cheers everyone.

Nice frame. I've always had a soft spot for Scotts.

I think it is a 1995 model. Below is a pick and link to forum post for a Pro Racing with same print font etc. Team versions were always nice frames.

I can't help but think the disc brake tabs have been welded afterward. Can you see any evidence re fresh paint, slight colour change etc?
If not, given it is a Team frame, I suppose there is a remote chance it was factory built as such because it was raced. 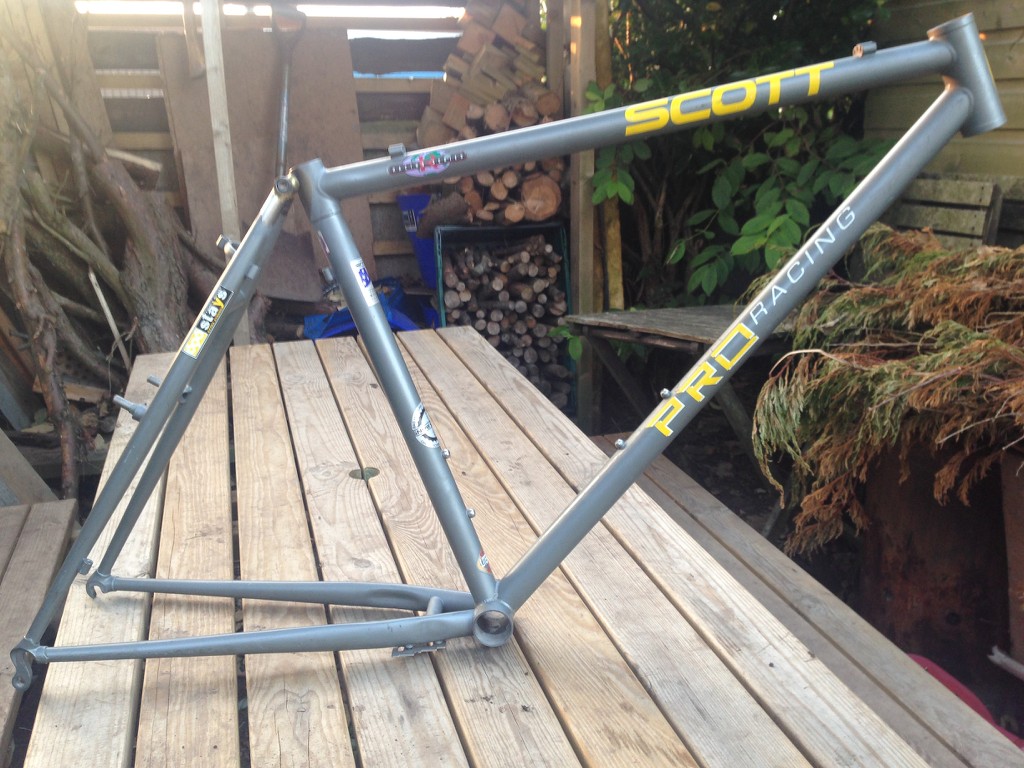 Martin some more info from this thread on Team Racing. Looks very similar but no disc mounts either.

This is what I was thinking as I haven't seen any others with disc brakes but it looks a good job. I'm guessing it had discs fitted because the brake bosses have been removed. Looking at it closely I would say the whole rear triangle has been repainted at some point but identical in colour and whoever attached the disc mount did a damn good job.

Obviously it was upgraded, has a rather modern shimano hollowtech crankset fitted but I'll probably steal that for another bike and fit a slightly more retro set. Can't ride much at the moment due to an injury hence the reason I have so many projects on the go but nearly finished my Marin so this is next on the list.

Thanks for sharing my scans on my page
Yes, that's definitly '95 model, last year of cro-moly Racing Series Unfortunately someone destroyed the frame I'm affraid (yes, I mean disc brake adaptor, which definitly isn't oryginal) - tubes in that frames are quite thin, so welding temperature don't makes them good

Ah that's a bit of a bummer. oh well. Didn't cost me anything and has a good crankset so will take that off and just throw some budget 21 speed parts onto it. Will find a use for it. Too big for me to use off road anyway so it will become the pub bike or something like that.
You must log in or register to reply here.