what is this thing called 'geometry'?

Read this the other night and felt very old and unaccustomed to a new variety of geometry buzzwords..... 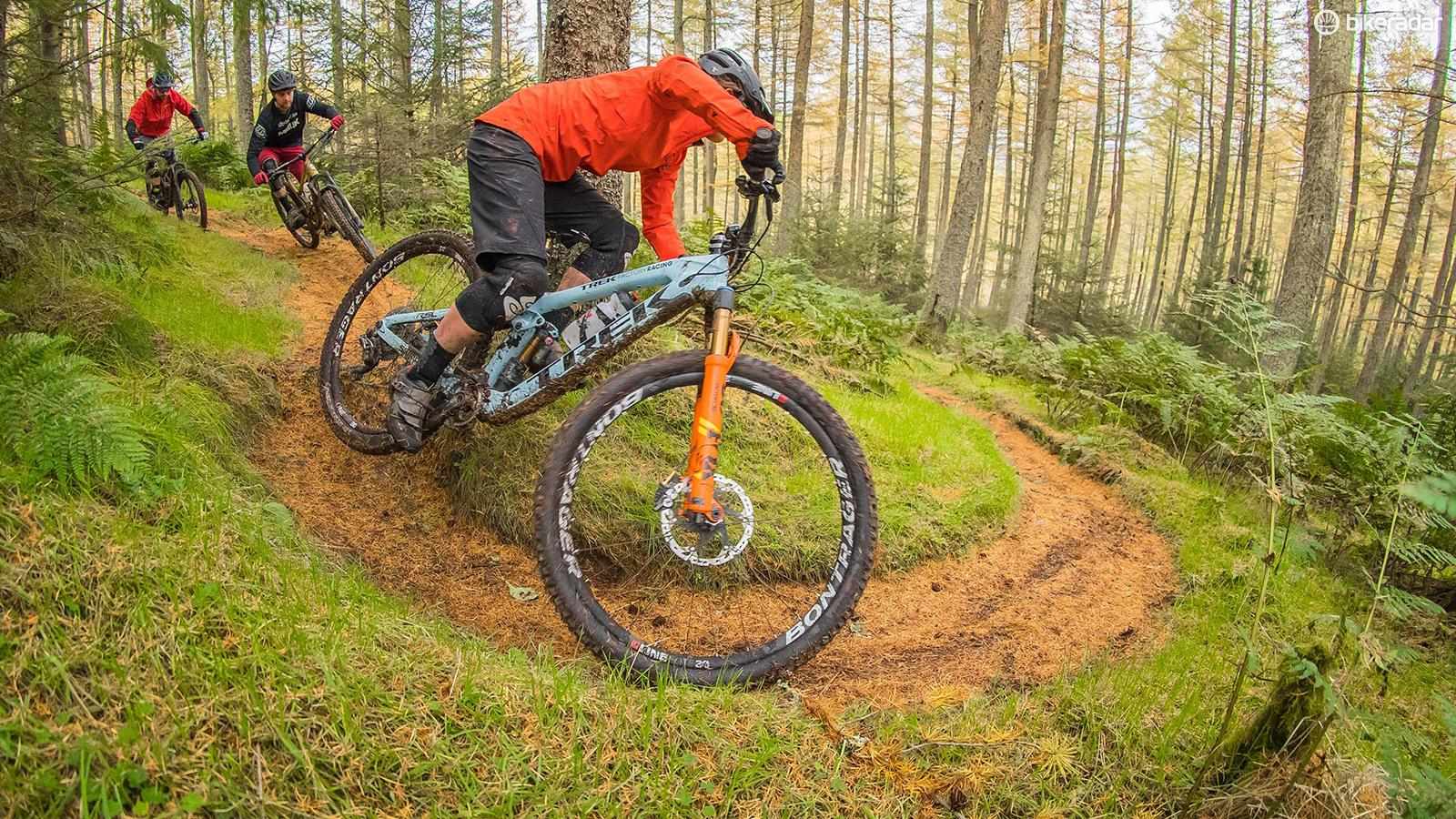 The ultimate guide to bike geometry and handling

I did notice there was little mention about swearing and getting pissed off when fork steering columns are cut too short
for the head-tube. At least some retro forks had the sense to have replaceable steering columns - new is not always progress.

With the risk of stating the bleeding obvious, here is my overview of 'geometry':

*Bicycle 'geometry' is about the interaction of structures/mechanisms with biomechanics, the Newtonian laws of physics and the characteristics of the terrain that is being ridden.

This means that there are a massive number of variables involved, and 'one geometry suits all solution' is therefore unlikely to work perfectly for all riders and situations. At best any single 'geometry' will be a compromise.

My height, leg length, weight etc. is fixed, but when I go out riding I choose a bike that is the best fit to the likely terrain:

*If the ride has lots of short very steep technical climbs, I chose a bike that is good when climbing out of the-saddle.
*If its very muddy. I choose a bike with the best rear combination of rear wheel traction and large mud clearances.
*If the ride has some insanely steep down-hills, I chose the bike that is least likely to unexpectedly send me over the handlebars.
*And when the terrain is varied, I choose a 'Jack of all trades, master of none bike.

The phrase 'horses for courses' comes to mind.

If I were racing, I would ideally want to be able to swap bikes to match the different sections of the course.

Also, though an unskilled rider will be constrained by limits of a particular geometry, a skilful rider may be able to make the bike do things it was not designed to do. However, pushing a bicycle beyond the natural limits of it's 'geometry' will only increase the risk of things going wrong.
Last edited: Jul 11, 2021

Re above, droppers and lockouts make in-ride geometry changes possible. Not very retro though. I rarely leave the saddle these days so appreciate geometry greatly. I know my general preferences and build to them. Maybe there’s not much chatter on here about it because most are experienced and know theirs.

The History Man said:
I know my general preferences and build to them. Maybe there’s not much chatter on here about it because most are experienced and know theirs.
Click to expand...

This.
There was a minor divergence around tyre width and pressure the other day. The outcome was much the same.

Not many folks will ride any of my bikes ,because they are set up for me and how i like them.*

*and becuase I run my brakes euro rather than UK.

Agree with all this you said....

*If the ride has lots of short very steep technical climbs, I chose a bike that is good when climbing out of the-saddle.
*If its very muddy. I choose a bike with the best rear combination of rear wheel traction and large mud clearances.
*If the ride has some insanely steep down-hills, I chose the bike that is least likely to unexpectedly send me over the handlebars.
*And when the terrain is varied, I choose a 'Jack of all trades, master of none bike.
The phrase 'horses for courses' comes to mind.

And would add that there's something fundamental boiling in the hardtail scene in the UK - the 29er from a UK manufacturer which I built last september is exceptional climbing in and out of the saddle. I have some reference climbs, based on going up them over a 30+ year period, on Team Marins, Oranges and various bits of US esoterica. Head angle of 65.5 combined with 42 offset forks and 35mm stem, with its tight rear triangle this things will waltz up steeps which were touch and go on the older bikes. It was lying in the grass at Itford Hill this weekend and someone jumped on it - and with 30T up front and 42 on the rear it just inched up the footpath that goes straight up the hill. Much grinning '...boy this thing can climb...' he said. Then, on the downhill side of the ups, the bike excels at your criterion 3.

Maybe there’s not much chatter on here about it because most are experienced and know theirs.

I thought this a few years ago, and was nonplussed by some of the emerging bikes. But then I built one new hardtail up and it simply stood head and shoulders above any bike in the stable. I really did feel that I had put 30 years of building into my experience and knew what was what, for me and for others who asked me to do a build for them. I did like what I knew, and I knew what I liked. But I didn't know enough about what radical designers were doing. It was when I started to dabble and use demo sessions that the qualities of the new designs became more obvious. It's true that, overall, there has been a tendency to produce bikes which are good for one thing and not for others. But that's changing. I have lightweight FS builds which go up the reference climbs like goats, yet descend like DH bikes - the Transition Sentinel and Patrol definitely fall into this category. Without silly expense, they are 28lb builds. But my standout modern bike is a hardtail, which is nice.

Does this mean I don't have any place in my heart for anything retro. Not a bit. I love them, and will do a retro build whenever it takes my fancy...

My kind of thread. I will reiterate the importance of quality tubing and great fabrication, with optimised geometry for ‘your’ physique and style of riding. Maximising tyre clearance for our sometimes gloopy conditions is also a biggie.

I’ve just added something more to the BfEMax review, on head angles. The 2021 BfE Max has a 63 deg static head angle, equating to around 64.5 for a 150 sagged fork. That’s slack. It’s also jolly good. What’s interesting is wander and flop. Wander & Flop are not a pair of new detectives or accountants. Wandering floppy steering on climbs has been the bane of the new geometry bikes. You hit the steep stuff and it can impossible to keep on top of the steering, which seems to have a life of its own. The BfE has a very slack head angle, yet very little wander and flop. Is this the stem? Nope. Standard 35mm stem. Is it the fork offset? Nope. That’s the same short offset which a number of bikes now have. I think it’s something interesting....the rear triangle affecting the front end. The long chainstays on the BfE affect the steering on climbs. Yes, they slow the handling a bit in singletrack, but not so much as to be an annoyance or a problem. But on steep climbs they calm the bike right down. The alchemy of geometry is Very Interesting....gold can be extracted from steel.....

For some years I have been using adjustable stems like the ones shown below: 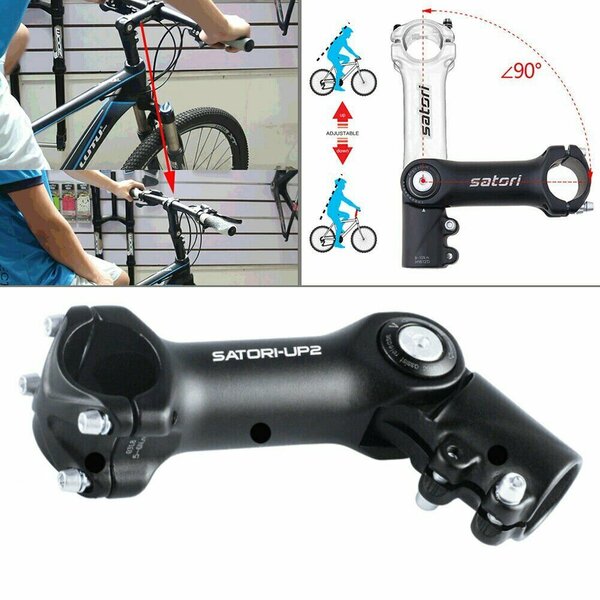 I find that you get far less 'Wander & Flop' on very steep hill climbs when they are are used in their upright,(zero steering-axis' offset, position.
On the same hill, I am far more likely to go off course and wander into a gorse bush when they are positioned forward and low.

This leads me to the interesting topic of steering resistance. When we drive cars we expect the steering wheel to resist being turned. Originally this was due to frictional forces within the mechanism or self-centring characteristics to improve safety. However, with power-assisted steering you could design car steering to be as light as you want and still have it self-centre when you take your hand off the wheel. But as far as I know, cars all build in resistance because having little or no resistance could lead to erratic handling and sudden changes in wheel direction could also lead to loss of grip.

I have recently been riding a bicycle that mimics the behaviour of a car steering wheel. In the straight ahead position there is no resistance to rotating the handlebars but the resistance gradually increases as a spring stretches and past forty-five degrees there is a lot of resistance. The bars also self centre far more quickly than by geometry forces alone.

I am currently 'on-the-fence' regarding the pros-and-cons of this system. For control over rough-ground or in tight corners, it is far less 'floppy' than standard steering set-ups.
Last edited: Aug 24, 2021
You must log in or register to reply here.

Which was your first bike which actually worked?......
2

A
ADVICE - Project Frameset - Jack of All Trades