Proof you can polish a Turd or at least roll it in Glitter!

I picked this 97 Schwinn Homegrown factory Team FS in “Bass boat” Blue sometime ago when a friend of a friend told me he knew someone who had a Yeti built frame for sale, of course the Yeti connection to this model is complete guff, it’s actually a cooperation with Control Tech and built using 6061 Aluminum, for a very short period of time Control Tech marketed the design under their own name and sold them as “Control Tech Team Issue Full Suspension” ….as far as I’m aware the only thing connecting this model to Yeti is the nod Schwinn gave them by using a Yeti branded handlebar

I’m hoping some of YOU guys will be able to shed more light on this one, for me part of any build is finding out and understanding how it came about, the evolution of the design and the thought process’s of the day that guided it, which is one of the reasons why I’m an avid reader/follower of the -->97 Section as I find the info surrounding many builds a real education,

anyway right or wrong this is what I know so far, I'd certainly be interested to know your thoughts

Most notable thing about this frame is the use a URT backend,(however Schwinn refer to it as an I.D.T or Isolated Drive Train) in the early to mid 90’s URT’s were a perfectly plausible design however they're now very much maligned as being an evolutionary dead end... like Neonatal man :? , this particular URT billed as “Sweet Spot® Suspension System” is the work of John Castello of Castello Designs which were used by a number of different manufacturers however Schwinn’s marketing must have been well stoked about its use and made a big thing about the Sweet Spot and billed the complete package as the Ultimate XC full Suspension race bike….
One Hell of a claim to make considering the XC Version won absolutely nothing of any significance :shock: ! however the DH version was ridden to victory in the Hawaiian Tour by no less than Tammy Jacques, and in Germany Jurgen Beneke at the National downhill Championship… :facepalm: Not excatly in the same league as the Reebok Eliminators or Kamakazi and Jurgen Beneke isn't exactly Bernard Unnassoblsay let alone someone who's actually famous

The full Metallic effect doesn't come across in the pictures, but if I said it looks like someone has managed to spray a clear coat over a ton of childs glitter I'm sure you'd get the jist 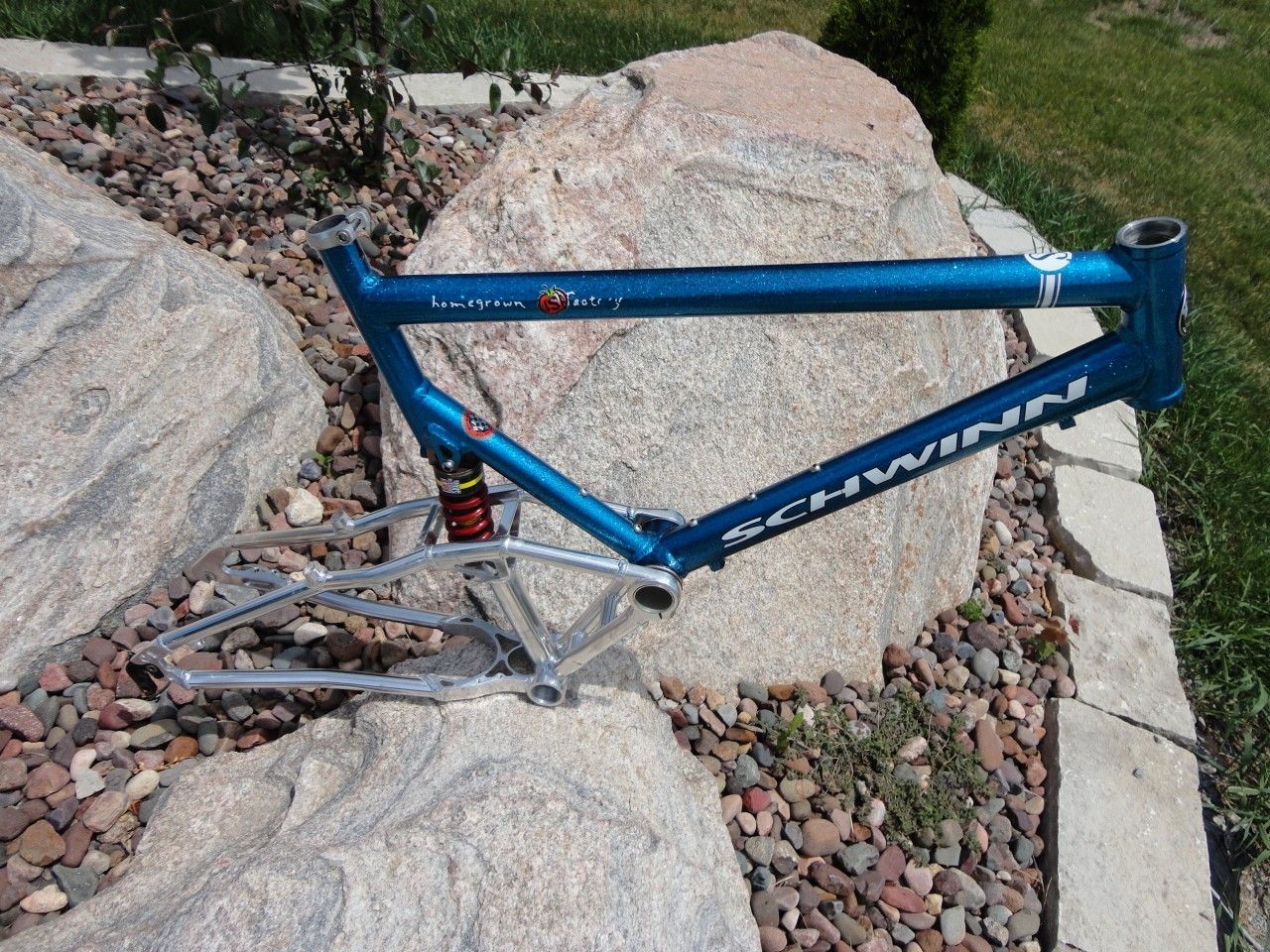 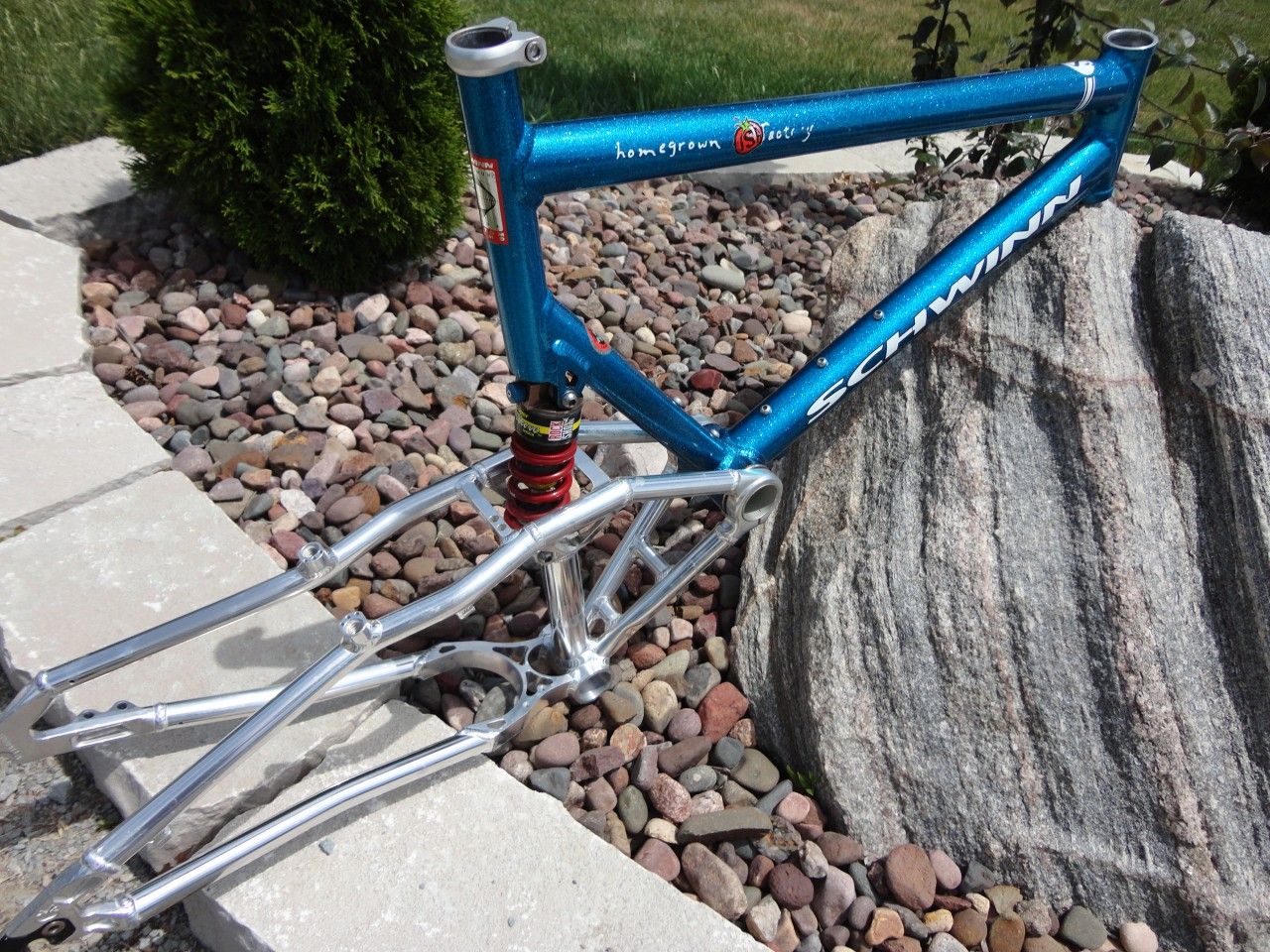 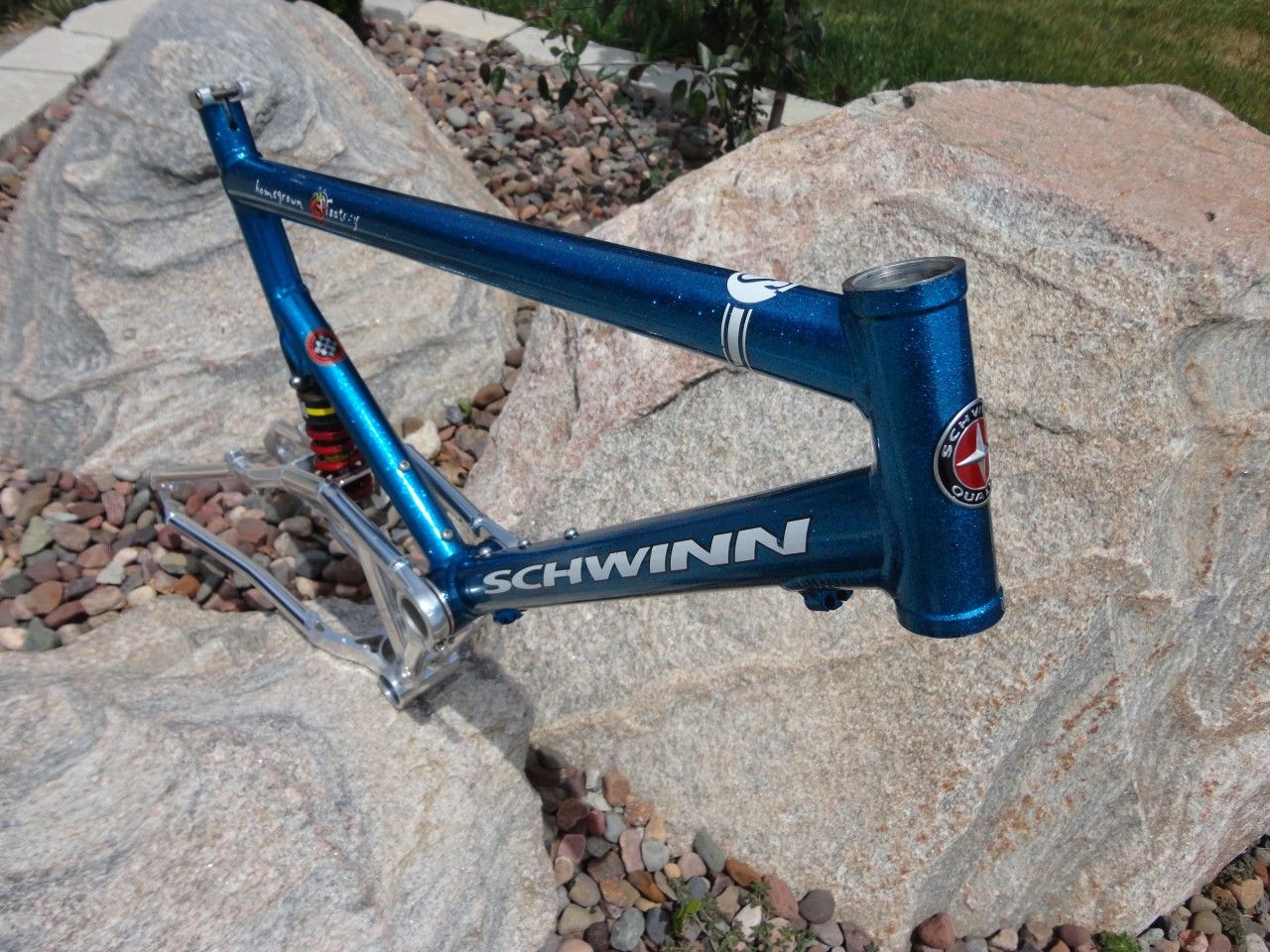 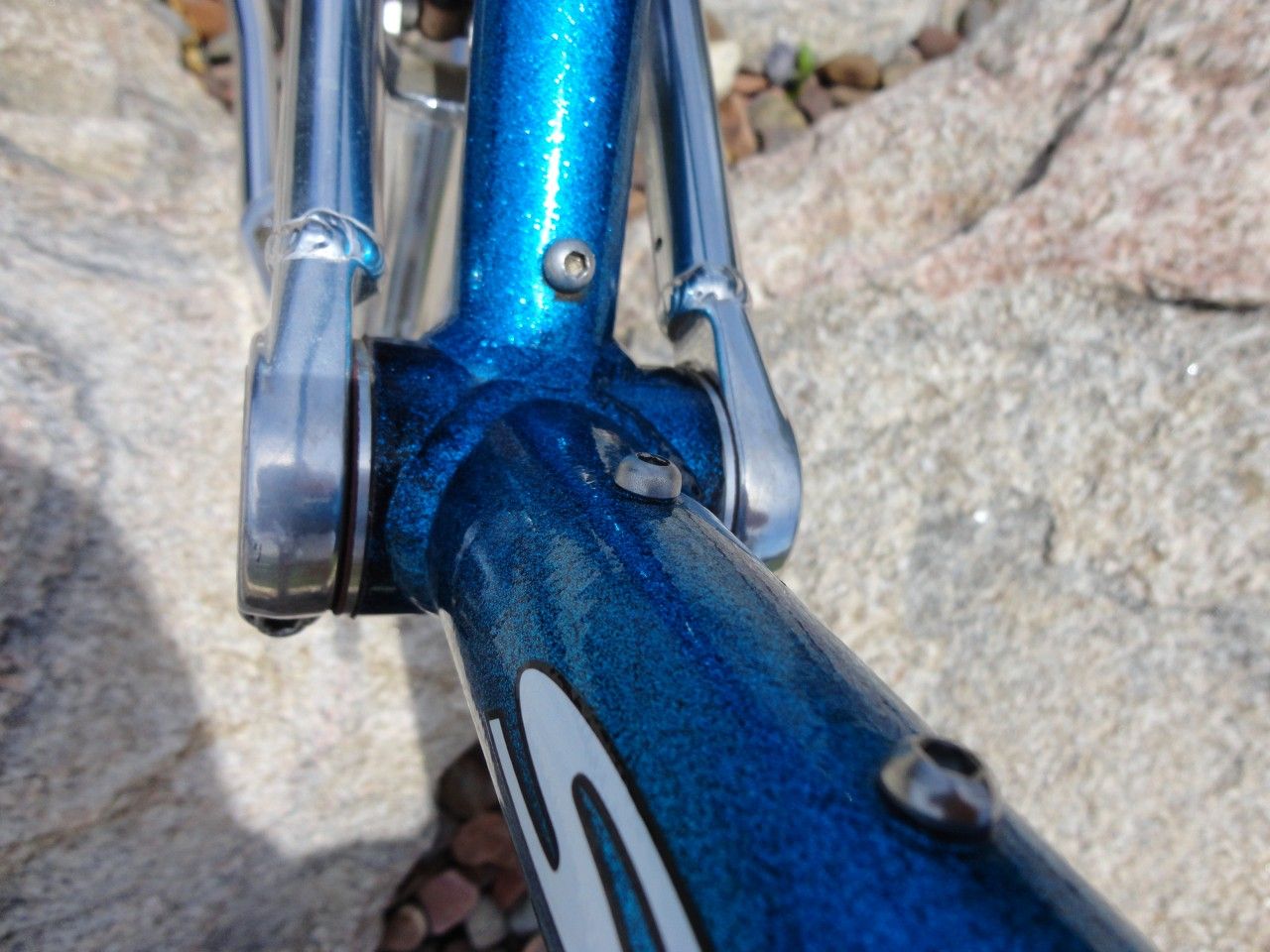 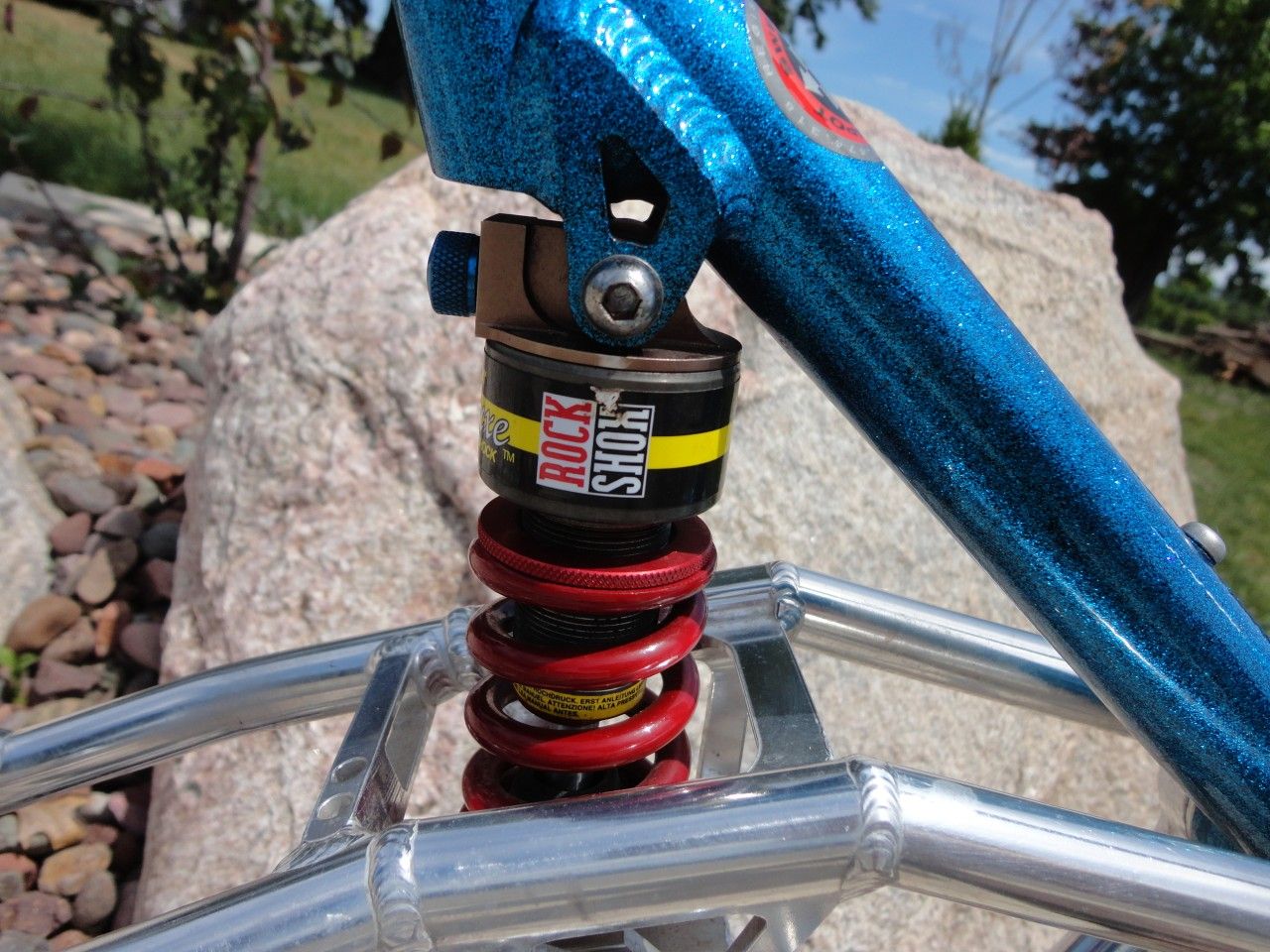 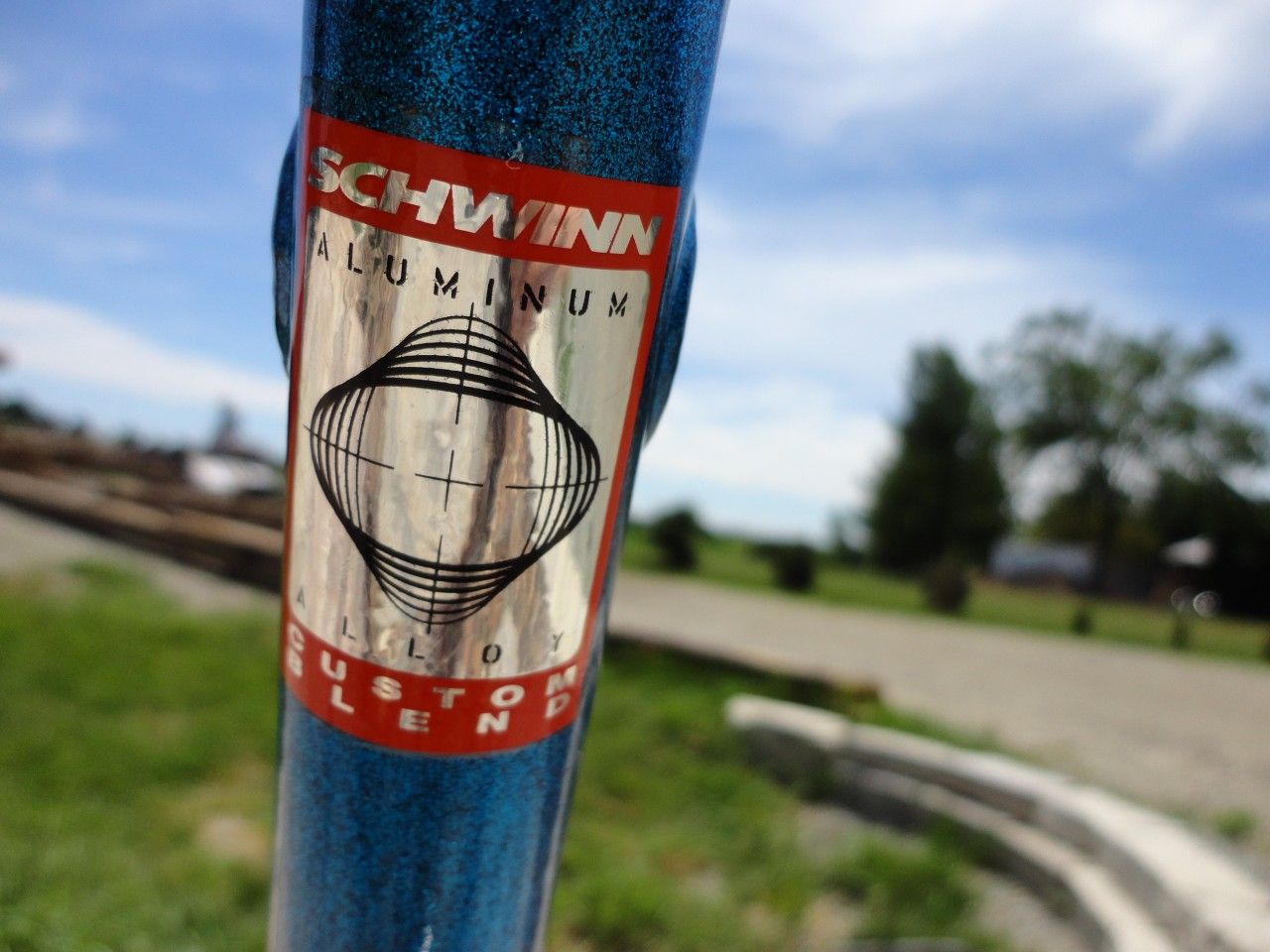 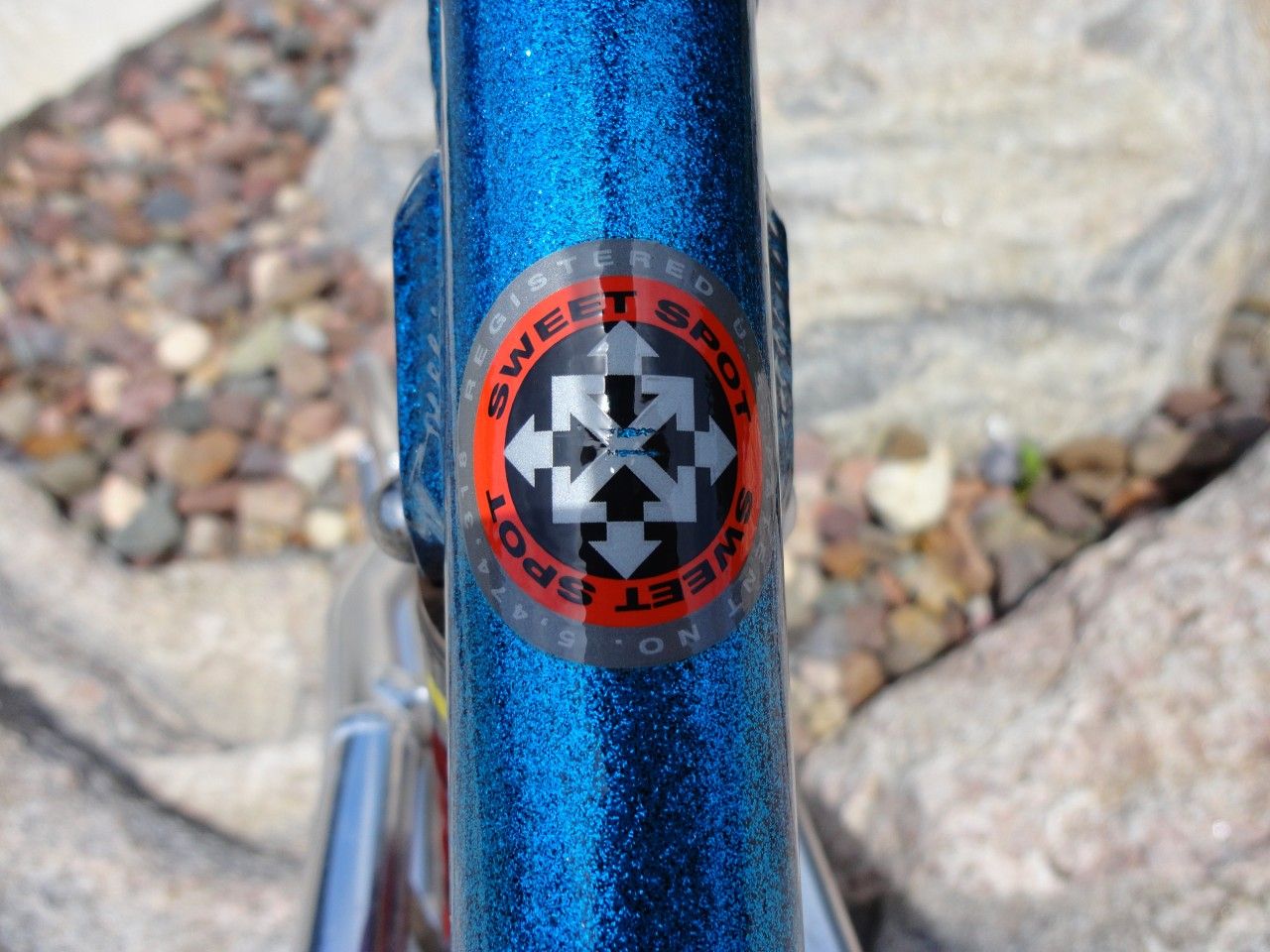 Having looked on line at Schwinns Home Grown models mines a little different as it’s rear end has provision for a disc brake which didn’t come in until the following year, however Bass Boat blue wasn’t available as a 1998 model, perhaps a very late 1997 cross over model or a warranty/upgrade rear end 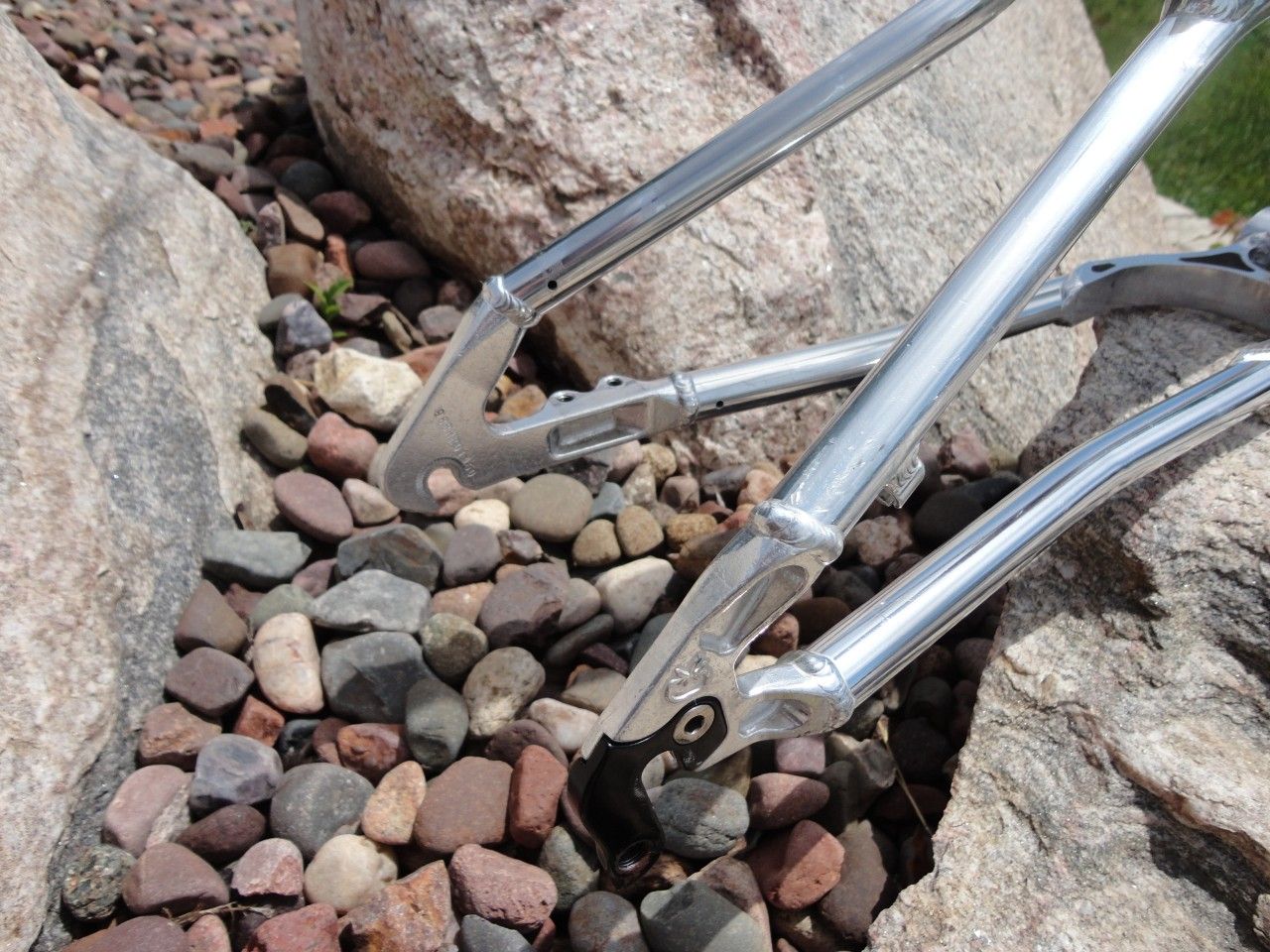 Compared to my Orange X1 (also URT) the pivot point on the Schwinn is in a radically different place being high above and a long way in front of the crank compared with the almost inline/touching position on the X1, so I’m looking forward to having this built and being able to judge for myself if the Sweet Spot is truly the sweet spot (G-Spot) for URT design… then again maybe you can’t polish a turd :shock: 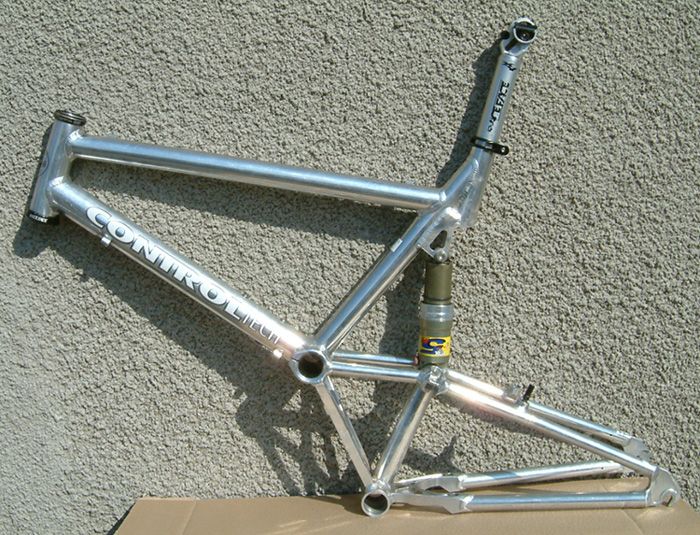 My Orange X1 with low pivot point for URT 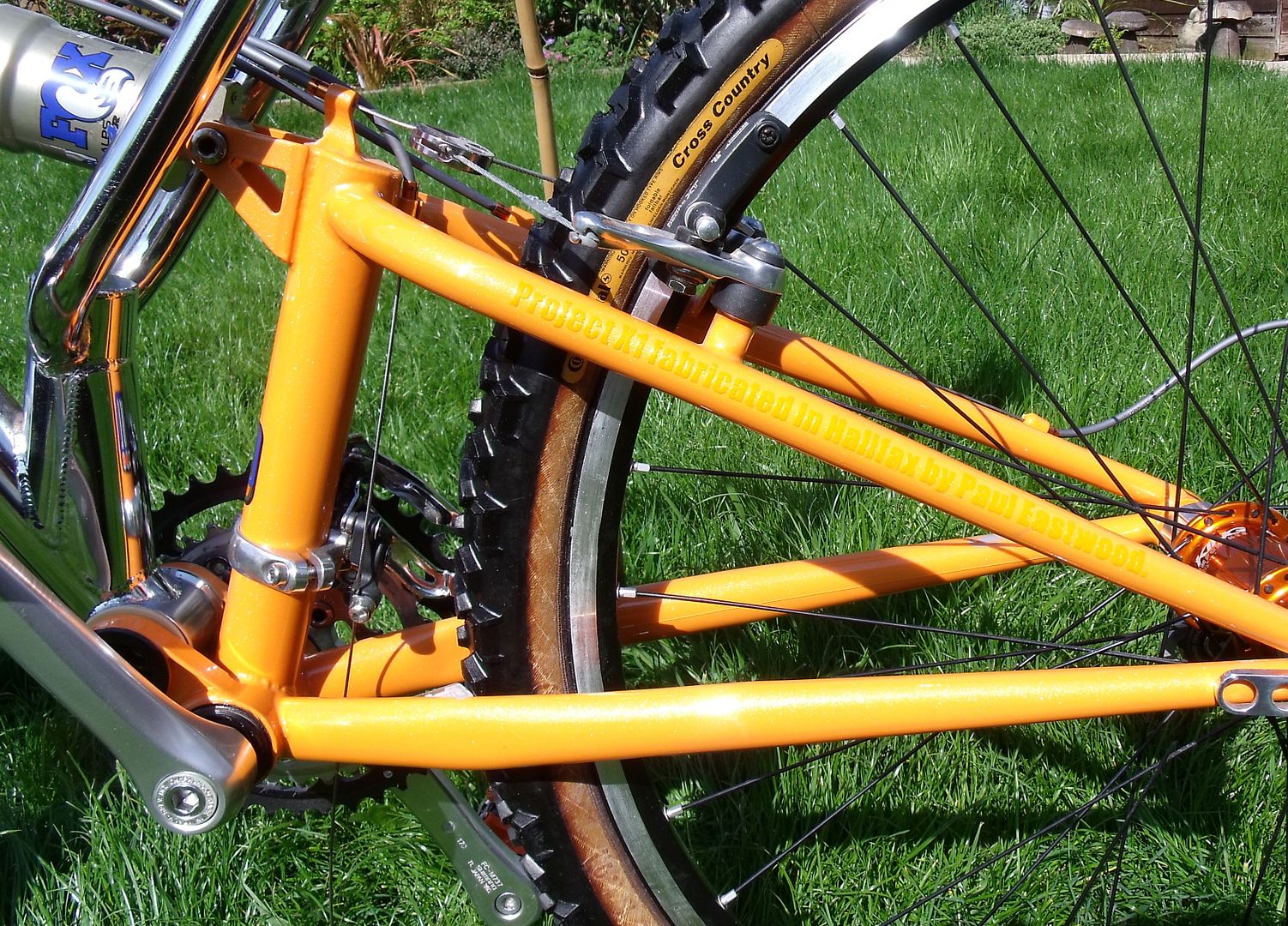 I would have to guess that Schwinns were never sold in Europe, because you just don't see them here. I haven't been on this forum for that long, but I have been through all 250 pages of reader's rides, and Schwinn is rare like Bridgestone.

Everything I know comes from bonustomato.com, which confirms the '97 BBB bike did not have the disc mount.

What you've suggested - warranty replacement, or they started on the '98 swingarms early at the factory - seems likely given that the shock matches the '97 bike.


aguycalled80":3t0scbt5 said:
I would have to guess that Schwinns were never sold in Europe, because you just don't see them here. I haven't been on this forum for that long, but I have been through all 250 pages of reader's rides, and Schwinn is rare like Bridgestone.

Everything I know comes from bonustomato.com, which confirms the '97 BBB bike did not have the disc mount.

What you've suggested - warranty replacement, or they started on the '98 swingarms early at the factory - seems likely given that the shock matches the '97 bike.
Click to expand...

Schwinns would appear to be a very unloved... the grey men of the MTB world and judging by the responce this built is already in the grey zone
not sure why they never really made it these shores in any numbers, is its a case of a Mis-understood brand or just too bland to be sexy !

Given all of the above I plan to build a bike to be a general rider, and one that I'm not to fussed about scratching/bending and has Brakes that work alot better than Canti's,

Since the Original spec is m950 I'm planning to go this route and mirror the spec sheet below but minus the black walled tyres, granted this build won't be as much of a challenge as doing a period build on a late 80's Yeti etc and won't win any prizes, but it will be a little different if nothing else ....perhaps a hommage to Infinitesimal blandness and beyond

Judging by the lack of interest I know most of you must be thinking I'm only trying to Polish Turd... but what a great turd

Although this frame came to me great shape, I thought prior to starting the build a real good clean and polish should be order of the day so I removed the rear end and having seen what others have achieved on this front with a bit of elbow grease I set to work with 2,400 grit as the starter then Autosol as main course and followed up with T-Cut and a soft cloth for dessert
When it comes to polishing metal gotta say a big thanks to WD-Pro for his master class and inspiration in a single thread viewtopic.php?f=1&t=198359 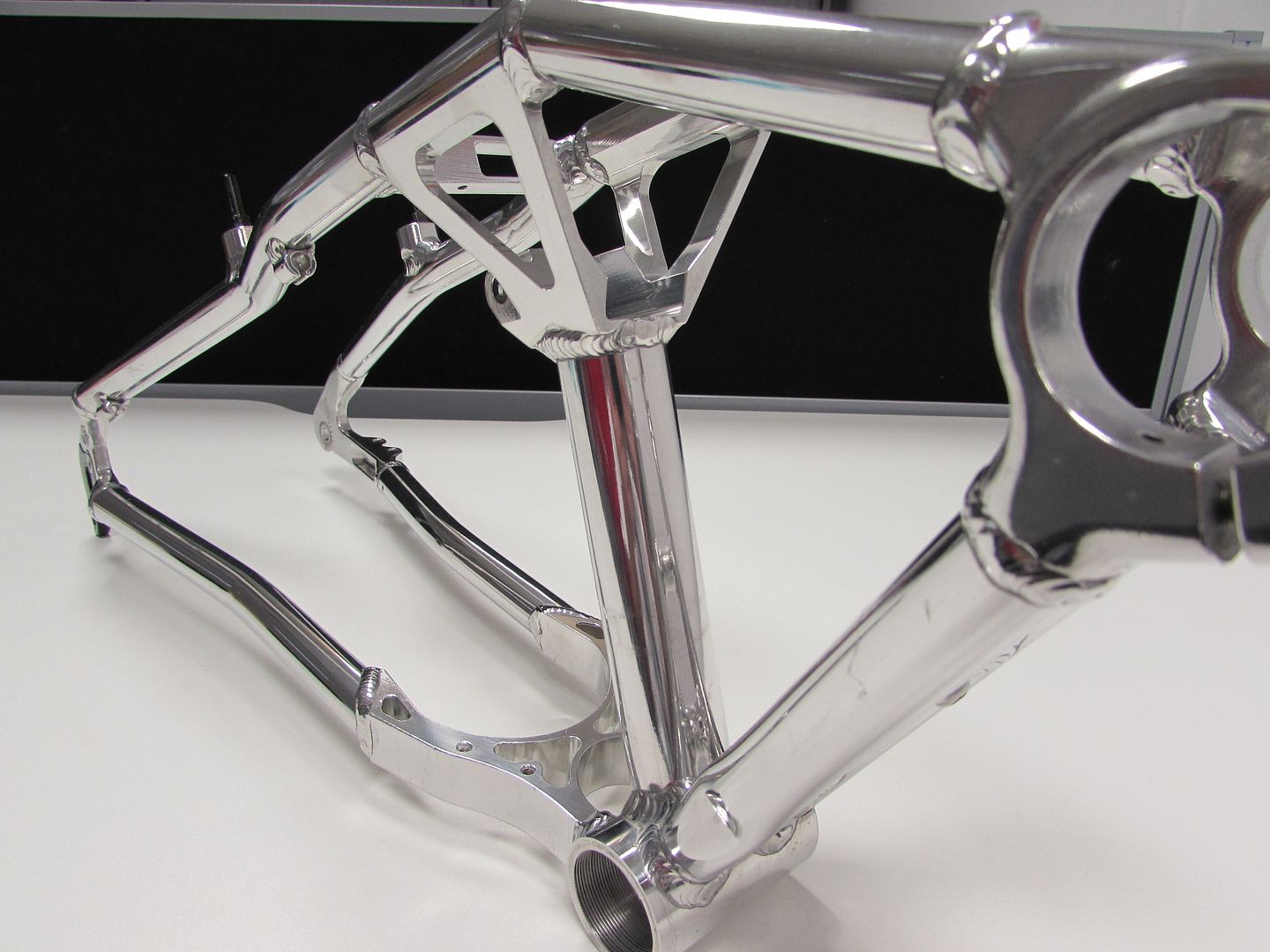 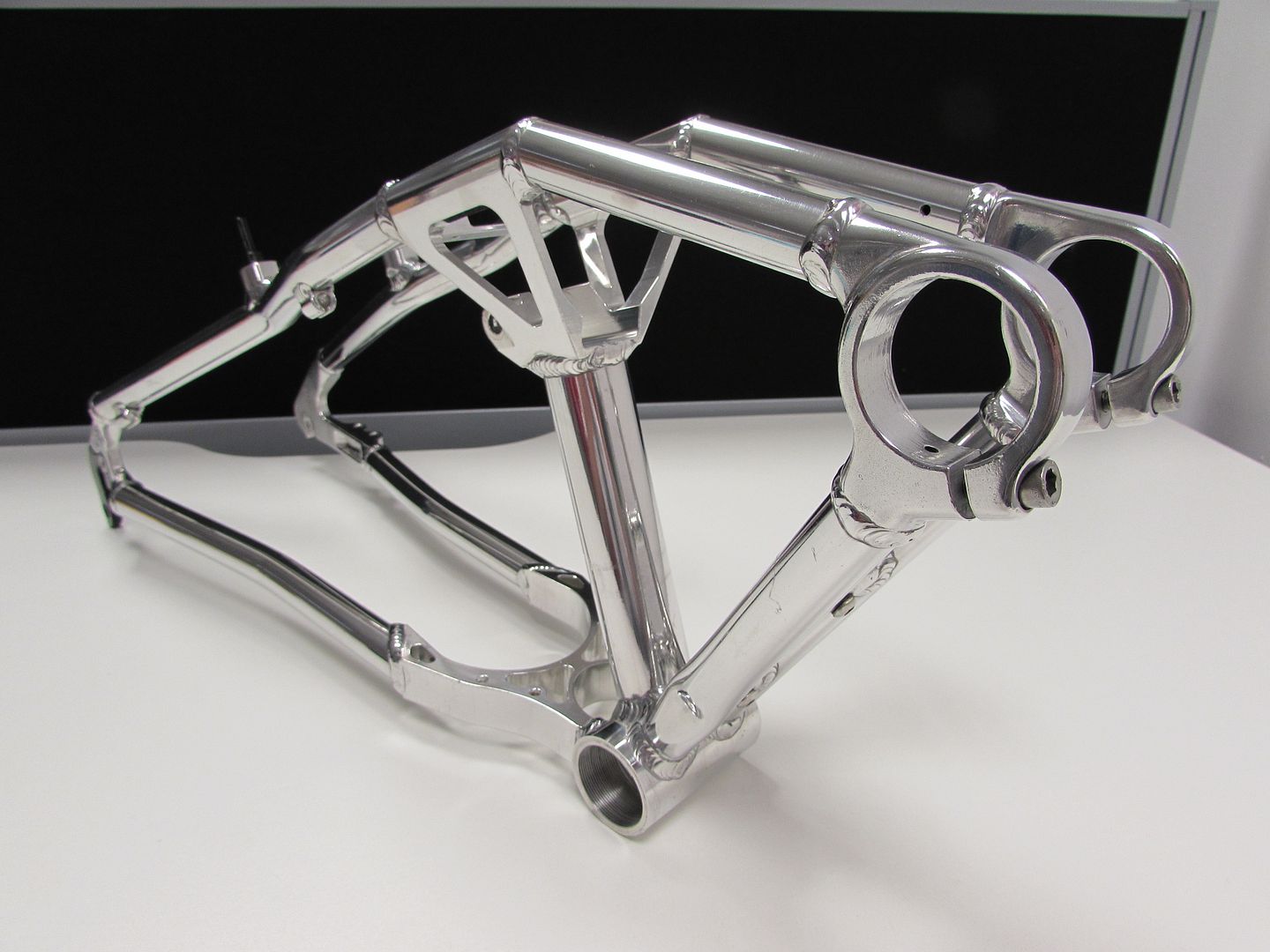 Just love the complexity of this URT design and number of welds, at a quick count it’s made up of 22 components all carefully welded together, sure took a lot of effort to design & build “Sweet Spot” Technology whether it works or not remains to be seen…. Although I guess history has already proved that one “It didn’t !” however this forum it littered with out of date technology otherwise we’d all be riding 29er’s or Phat bikes GOD BLESS OBSOLESCENCE 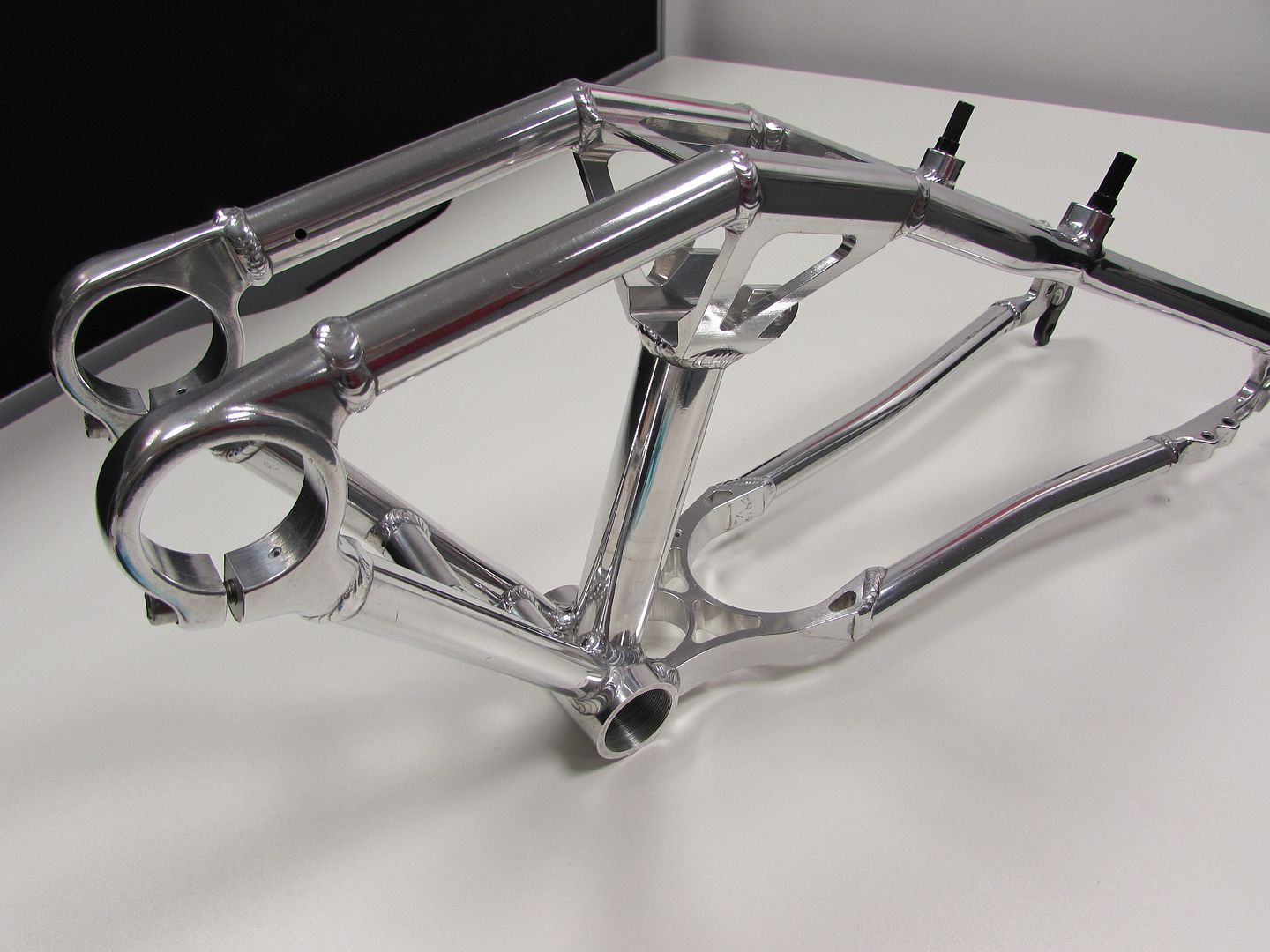 I was so pleased with the results I ended up digging out some old Syncros cranks and set about polishing them as well, I’ve now got 99% of the parts for a XTR /M950 catalogue build but since they came up so well I’m toying with the idea of going down a different route and going with a Syncros Post,Stem,Bar and B.B 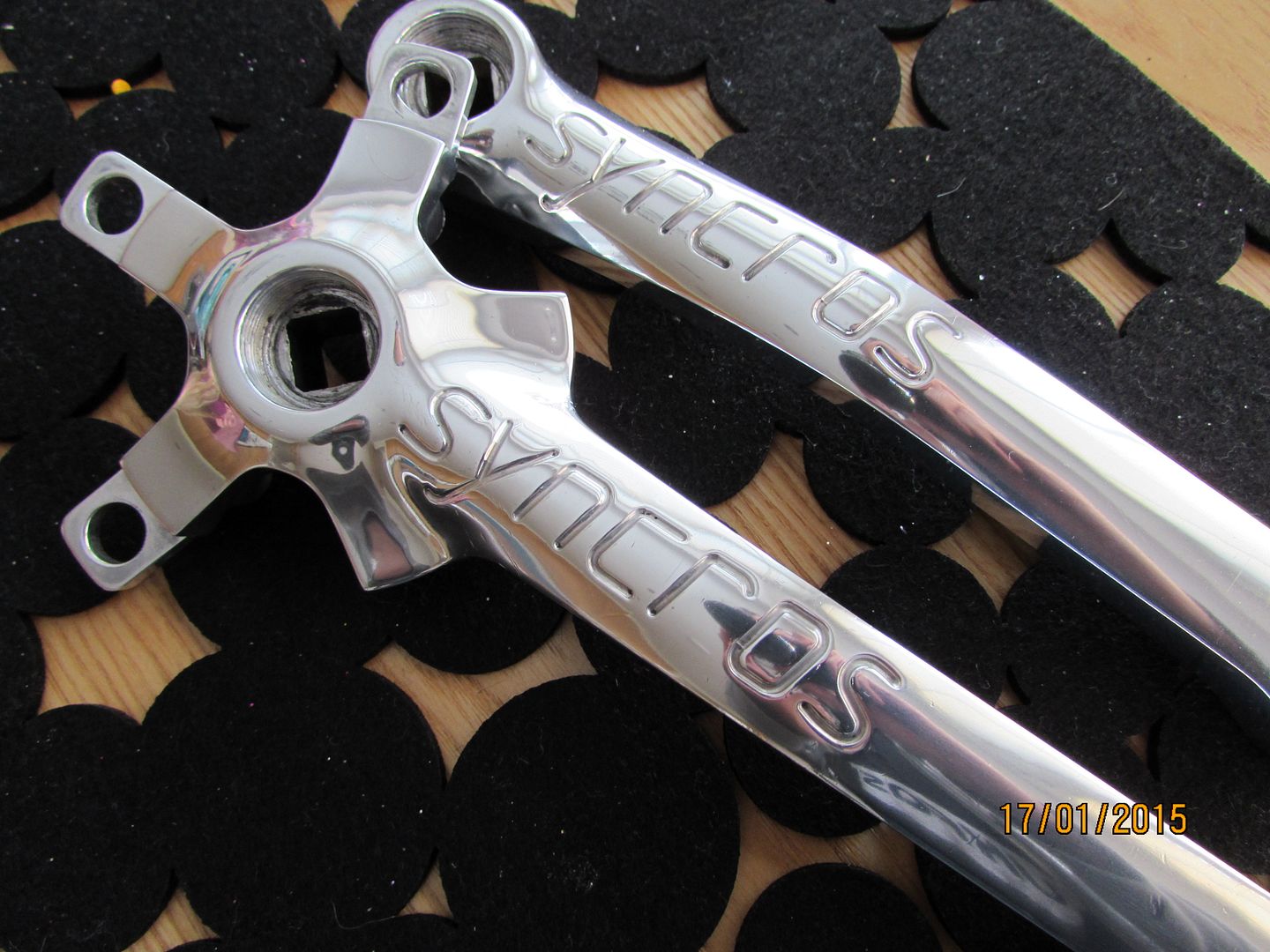 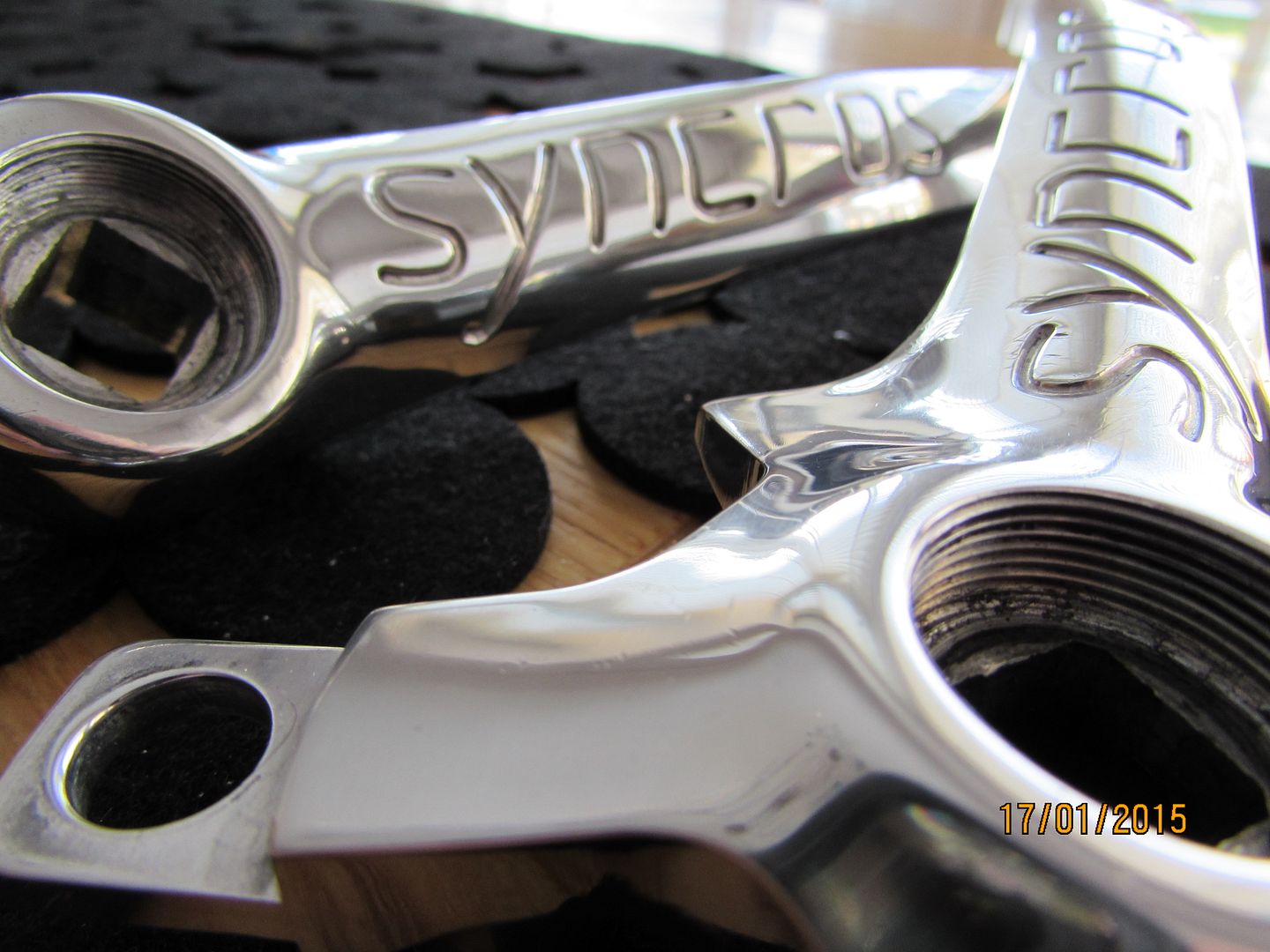 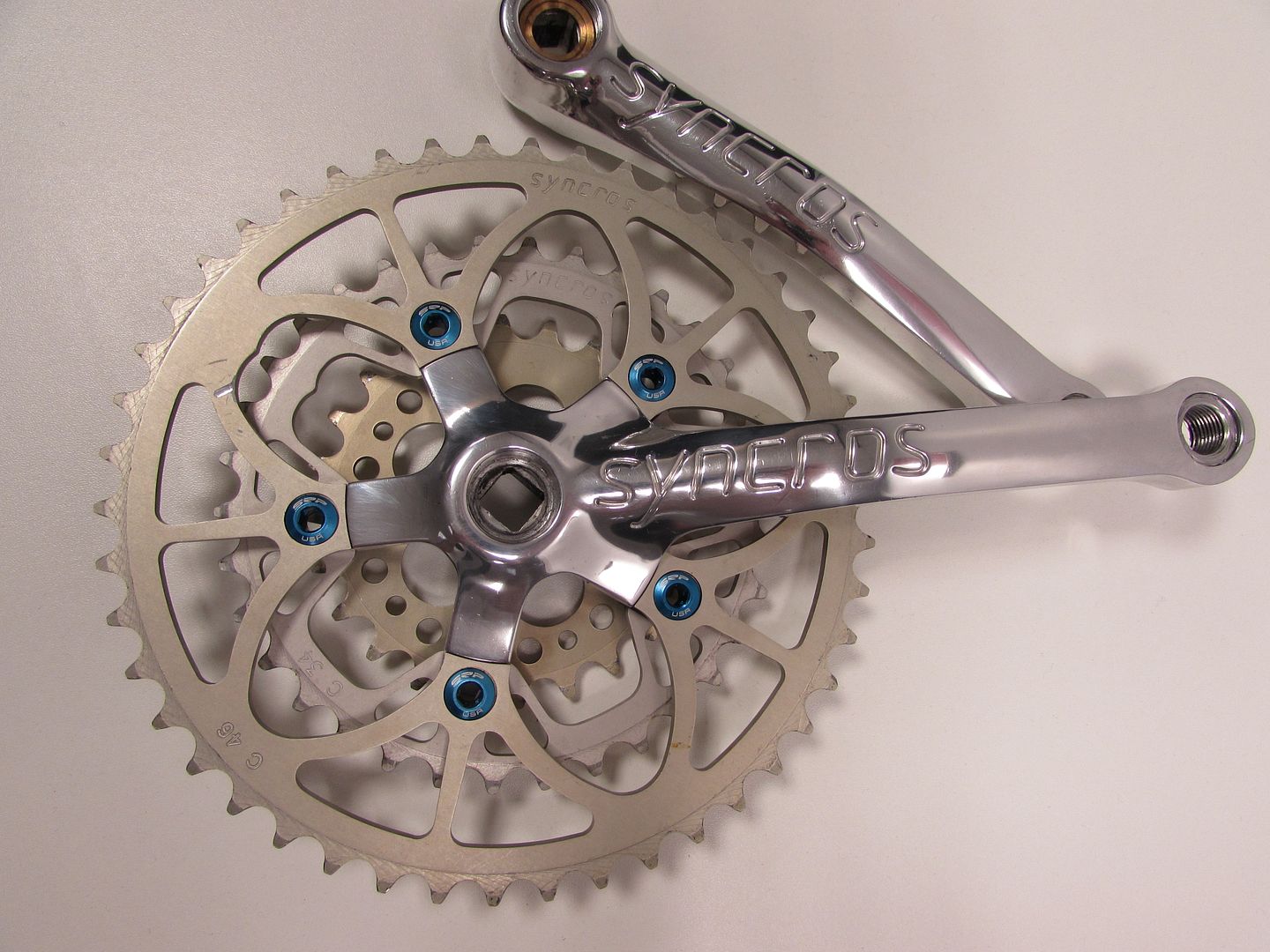 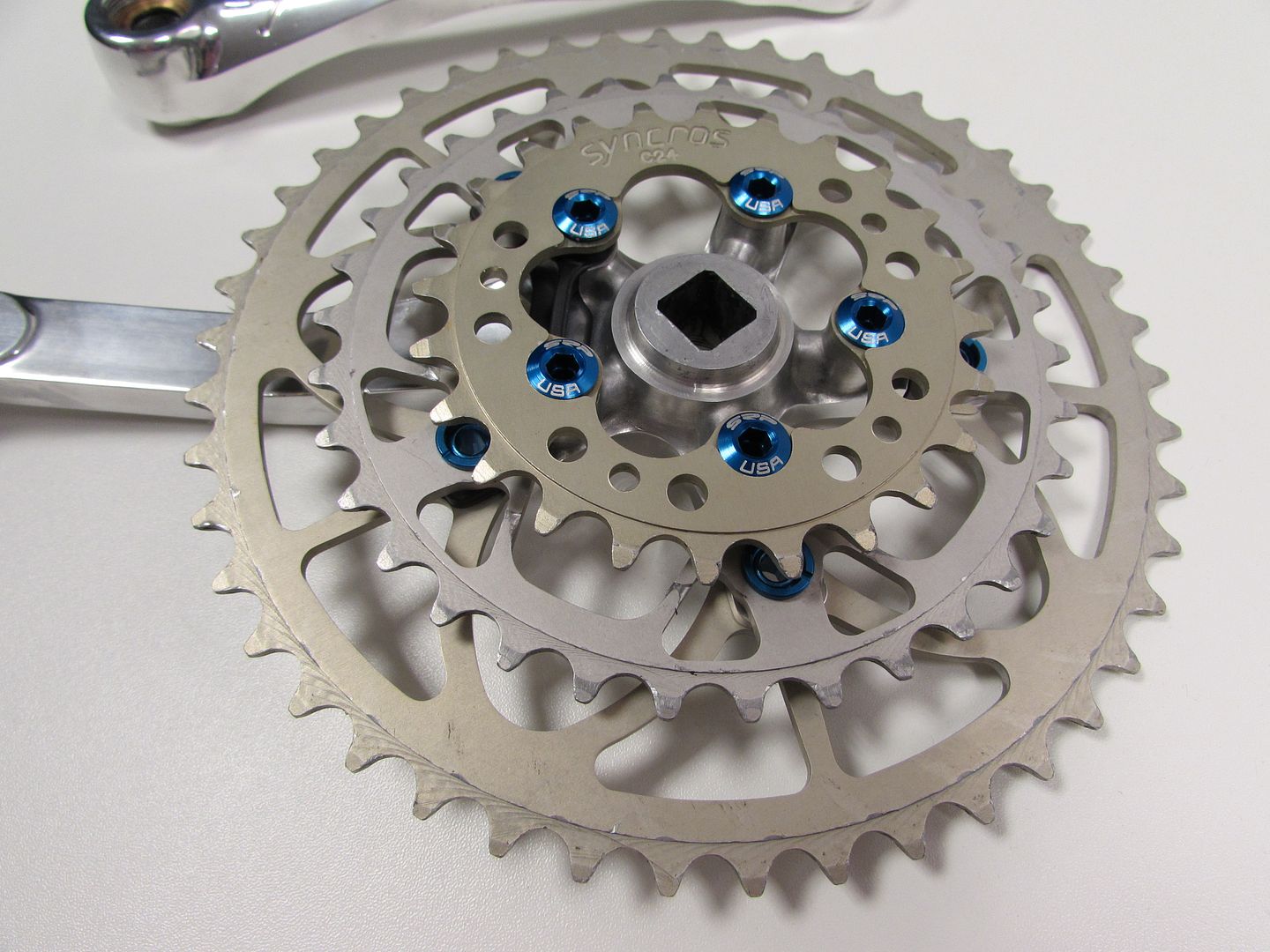 its gonna be one shinny Turd

Most of my builds don't get much interest either so I wouldn't worry.

I love something a bit out of the box.
Keeps things interesting!

Not a bike I lust after admittedly but you are doing great work!
M

Re: Proof you can polish a Turd (Schwinn FS)

The polishing work looks fantastic. Be individual, who wants to follow the herd?! Looking forward to seeing your progress

Re: Proof you can polish a Turd (Schwinn FS)

I do love the Schwinn Homegrown bikes (more of a hardtail man myself). Great polishing job btw.! Love the Syncros crank and chainring combo! Will follow the build thread on this one (it's got two interesting angles for me: Homegrown and Syncros) I assume you're going polished stem and seatpost.
You must log in or register to reply here.