this fat lump weighs 24.9 lbs with no nod to weight saving: 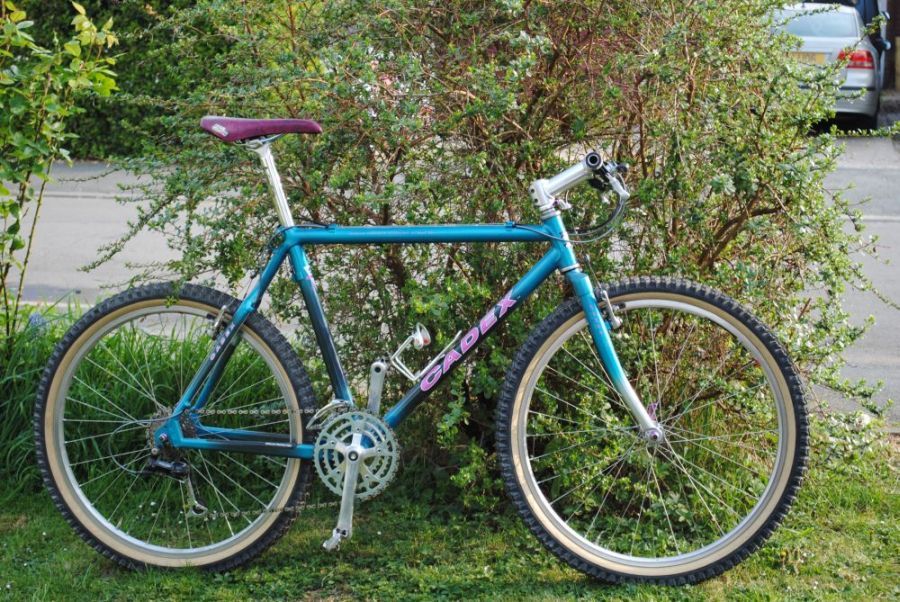 legrandefromage":1253lq7s said:
this fat lump weighs 24.9 lbs with no nod to weight saving:

I've not really tried to save wegt specifically, just missed fitting extra chainrings, front mech and shifter, as well as using xtr, which I assume is light.

Nice bike btw, like the colours on that one. I'm toying wit using the original rigid fork at some point, as I managed to source one which turned out Tobermory the right colour by a fluke of some magnitude as the frame was bought in the uk, the forks from holland I think, or even the Czech republic.

Hmm, curse my lbs. On the first proper ride,my commute to work, the post kept slipping down no matter how hard I tightened. Looks like I do need a 30.2 post after all. O can only find cheap posts in this size. I may have to get one in the short term until something nice turns up that I can afford.

Thanks for the positive comments about the build. I need a new seat post and a longer stem, but other than that I am quite pleased how it turned out. I assume that the longer post will stop the front end being so reactive, and also increase the knee/bar clearance that I'm seeing when I'm out of the saddle on the uphill sections? Or is this all a waste of time and the frame is too short in the top tube for me?
L

the frame has a canti mount on the rear!

What about shimming? Have a look out for syntace stuff, very light underrated and would suit the build, both stem and post.
L

kaiser":99uas4cu said:
What about shimming? Have a look out for syntace stuff, very light underrated and would suit the build, both stem and post.
Click to expand...

OK, tried shimming the post with a coke can, as read on here as a fairly well used fix, and my first attempt was too good to be true. Cut can, inserted in frame, in went post - sweet.

Sadly on the ride home, the post still slipped. I put this down to not having enough can in the tube, so cut it better a second time around so it took up almost the entire circumference. Will be back on the bike in a few days so will let you know how this went, but it was much more fiddly this time around, and my repeated attempts to get the post in and out, and the shim inside the frame, but not too far has resulted in a very shiny bottom end of what was a very clean and unmarked Thomson post At least it is below the minimum insert.

Here's a pic of the shim, lets hope it works this time.

On another note, I changed the saddle as the brooks wasn't too comfy. I slipped on a nice and expensive Selle Italia SLR, and at 135g, light as **** too, but man did my rear hurt after the 8 miles to work, so off that has come and on went a saddle I bought off here a couple of days ago. Red corners tie in with the forks and the red bits, has an odd designwith the rails integrated into the body - light though:

Stem has been changed too for a syncros 120mm I had. A huge improvement on the shorter Thomson! Needs decals.

Building a commuter for off road rides home?