Nope it was Webbline Cycle Tools, generally good for tools at cost effective prices but still as guilty as anyone for false advertising :roll:

I had similar the other month when looking for the bigger Surly ET tyres for the Big Dummy. One place had them a couple of £ cheaper than even the deal from Bikemonger and said due in stock. So I messaged them and asked when they were due?
September 17!!!! Did I want to order? I believe the term is ...........wankers!

This weekend I finally got around to trying to repair my damaged carbon road bike- a Planet X RT-57 full carbon bike I got under the bike to work scheme in 2012, as obviously none of my other bikes were suitable to coast the half mile down the road every day.

Tragically it fell over in the garage in 2013, and the top tube impacted right on the pointy corner of a concrete step- ouch. 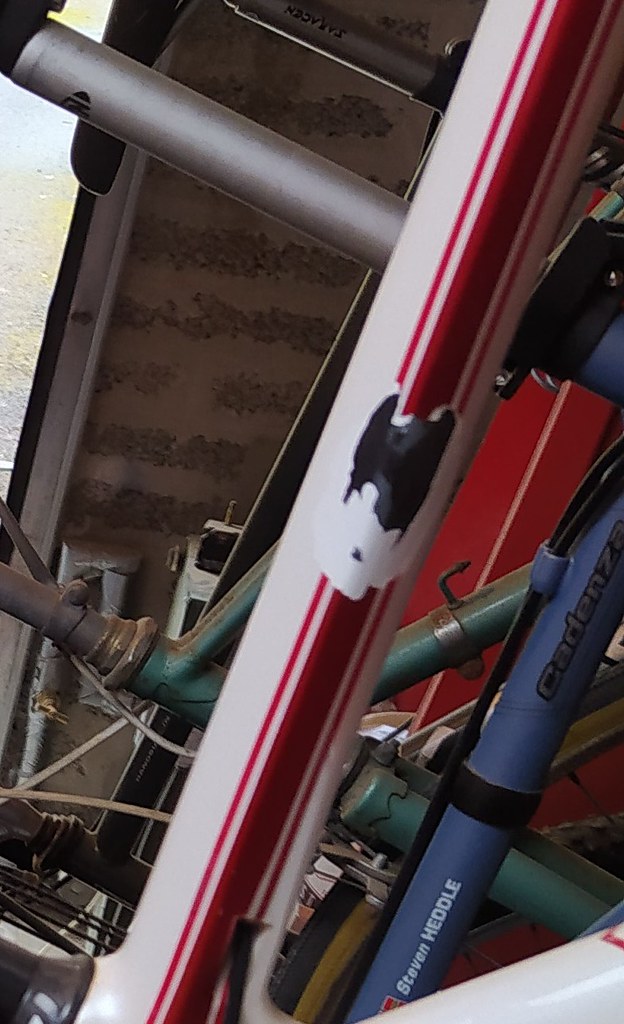 I lost confidence in it on the road after that, as the area of damage could be deformed by thumb pressure. And the tap test with a coin showed that part as a dead spot.

But last year I looked into carbon fibre frame repair, and found it was pretty viable, and if you have ever built a stitch and glue boat before, pretty familiar. So I got a kit from Easy Composites, which included the all important heat shrink tape to squeeze out excess epoxy from the carbon fibre weave.
And did nothing with it for another year.

But at the weekend I sprang into action. I sanded down the area where I had decided to triple wrap the tube with a patch that tapers for each successive layer, then masked it off and coated it with a layer of epoxy, and left it 4 hours to get tacky: 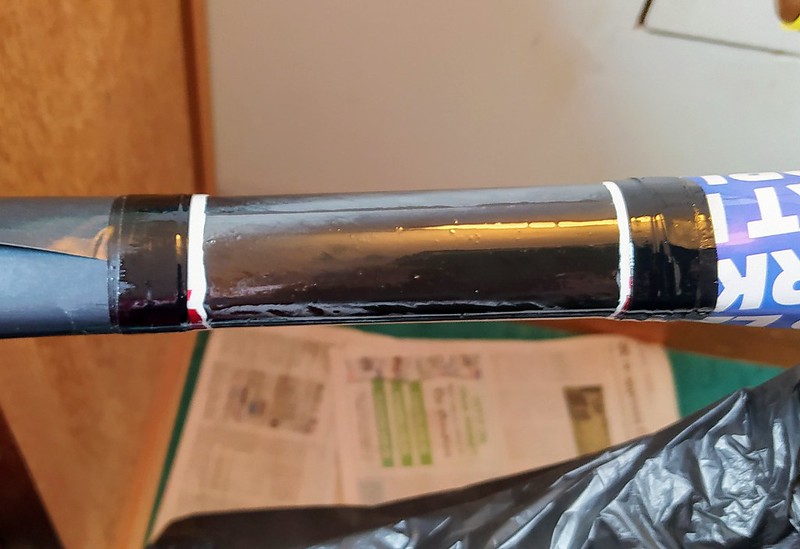 The patch was templated in advance, and looked like the following. The tube profile is a tapering rounded triangle, so there is a small turn for each layer. 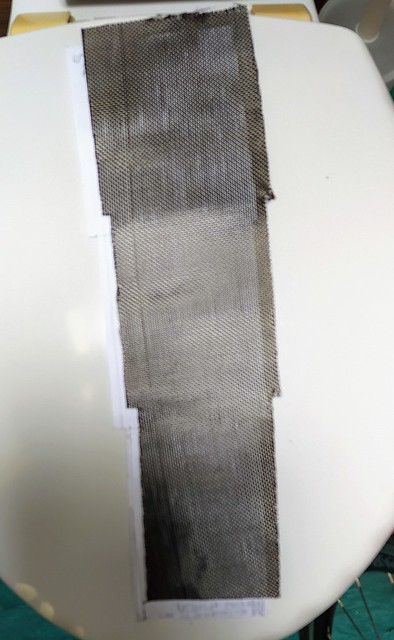 You'll detect a bathroom vibe in these pictures- I did most of the work in our upstairs bathroom as I needed to keep the temperature about 20C for the epoxy to cure.

Applying the patch, wrapping it around the tube and wetting with epoxy, then wrapping with heat shrink tape which is shrunk by gently using a heat gun, and mopping up the excess epoxy got me to here: 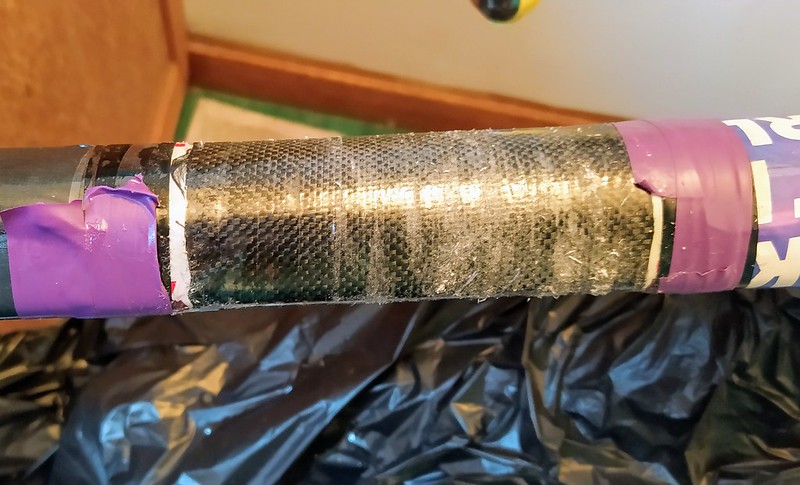 This was left to cure for another 6 hours and the tape removed to show something that looked like what I'd seen on the YouTube videos. 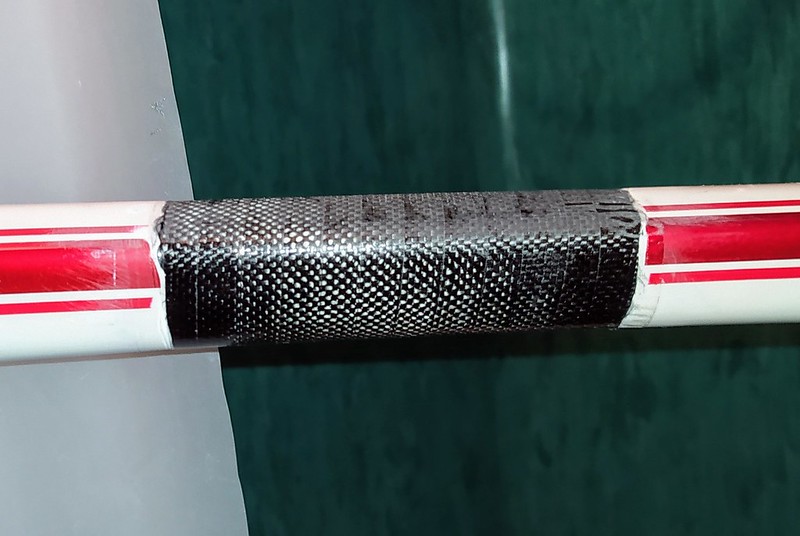 The kit contains 6 different grades of sandpaper, plus polishing compound, so I set to work to get a gloss finish. I was a bit disappointed with the polishing compound until I discovered I should have been using a wooly disc at 800rpm to buff it up rather than a vigorously wiped Tesco kitchen towel. Armed with this information and not having a wooly disc I vigorously wiped some more, and have now got to here, where it all sounds good tap test wise. 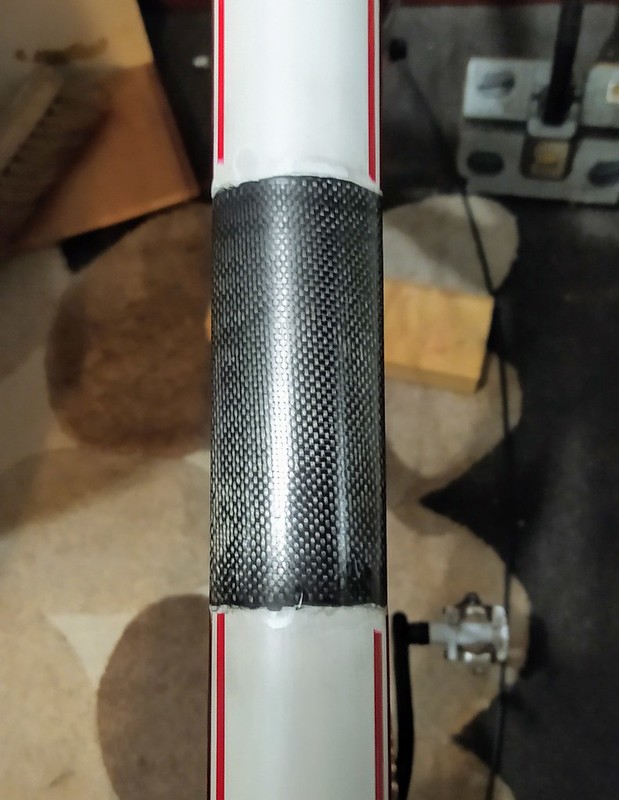 How to finish it? History tells me I will make an arse of painting, so I am minded to maybe just mask the transitions with a red stripe and clear coat it. 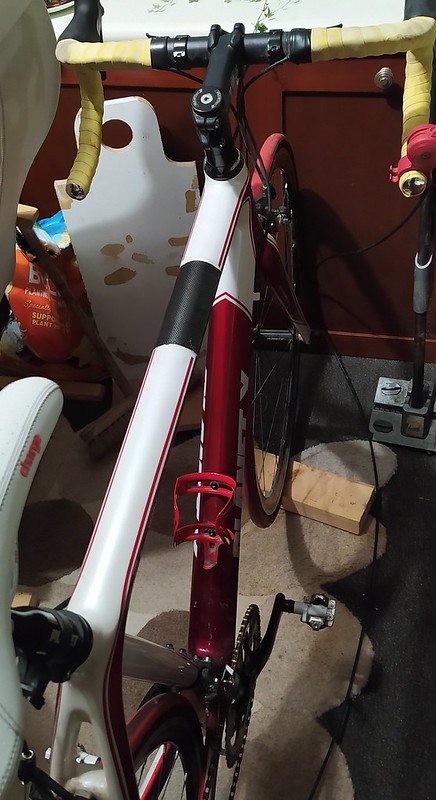 MacRetro Rider
Today I rid myself of 4 more bikes and enlarged my bike storage. The latter point seems weird when you note the former point but I can actually access all my bikes with less climbing over others. Unfortunately I still have 10 bikes which is more than I thought I had, because they were hidden behind the bikes I got rid off. I am convinced they breed!
J

Something to amuse those of you contemplating a wooden bike build...

Wooden you believe it!!

MacRetro Rider
Mine is beyond contemplation and being assembled as I type. Unfortunately due to its construction materials, namely whatever scrap wood I can find, it's not even slightly "quite light", more a bit heavy.
Plankenstein will be one fugly mutha but hopefully up to the job

Look forward to seeing it Velo.
I am sticking with steel for singlespeed UK and will be using my 1X1

Jamiedyer said:
Look forward to seeing it Velo.
I am sticking with steel for singlespeed UK and will be using my 1X1

Velo will be using 2x4 I think

Took a trip a bit further afield this morning to ride my Singlespeed in some "bigger hills", I ended up doing a bit more pushing/walking than expected, but that's Singlespeed for you, and it was barely any slower walking compared to riding up some of the hills anyway.
I did notice a bit of skill fade and a bit of memory fade too, it must be over a year since I rode these particular trails, and it felt like it.
Only the one fall though, having made it to the top of a rock feature I paused for a moment to mentally congratulate myself, but must have forgotten to put my foot down as next thing I know I'm toppling sideways.... fortunately my fall was broken by the granite bedrock slab... and the metal flask in my backpack...

.
Then as I lay there catching my breath some chap comes jogging by asking if I was ok... "yes, just having a rest thanks..." I replied.

Literally the only other person I saw the whole ride and he comes past just as I'm laid on the floor like an erse!!
Mind you if I'd hurt myself I would have been more than happy to see him.

Yesterday I headed down to Pitmedden for first time in 8-9 months. Trails were running fantastic. The recent rain had damped down all the dust without getting soggy and grip levels were perfect. Loads of new trails at the Clink end, but mostly above my skill grade. Took the ebike which sounds like cheating (ok it is a bit) but rode nearly twice the mileage I normally would there , and in less time. Makes a big difference being able to ride sections 2-3 times or do them both ways. Despite the 25kg heft of the thing, I’m finally learning how to get the best out of it on the downs.

Today I made up for it and hauled Logan down to the beach park in the trailer. Only 9 mile round trip, but between the plus tyres and the weight of him and the trailer, which is now well over 25kg, it’s still a fair workout. Especially the home leg which is 2 miles all uphill from Carnoustie to our village. Full body workout too between pushing him on the swings and the seesaw!
Good to get out while the weather was still nice.
You must log in or register to reply here.

Back on the bike