My Karakoram Elite is the bike that got me back into biking, having not ridden one since the age of 15. It's also the bike that led me to Retrobike, so quite clearly the most expensive bike I will ever buy.

However, since the day I decided the paint was too tatty to keep (which was easier to justify as quite a few of the parts weren't original and I was building it up for more all-purpose than classic ATB) I have been on the lookout for another in the same understated alternative paint scheme - just a simple black.

Five or so years later, one came up on Ebay. In exactly the same size too - 20". It couldn't have been much worse timing for me, as I have no money, having committed to go to Sumatra next month and it was outed on here, but fortunately the collect only from Cleethorpes (convenient enough for me) probably saved me.

Whilst collecting this, I also managed to acquire a KHS Montana Comp from the same seller for Chris (viewtopic.php?f=6&t=322258) 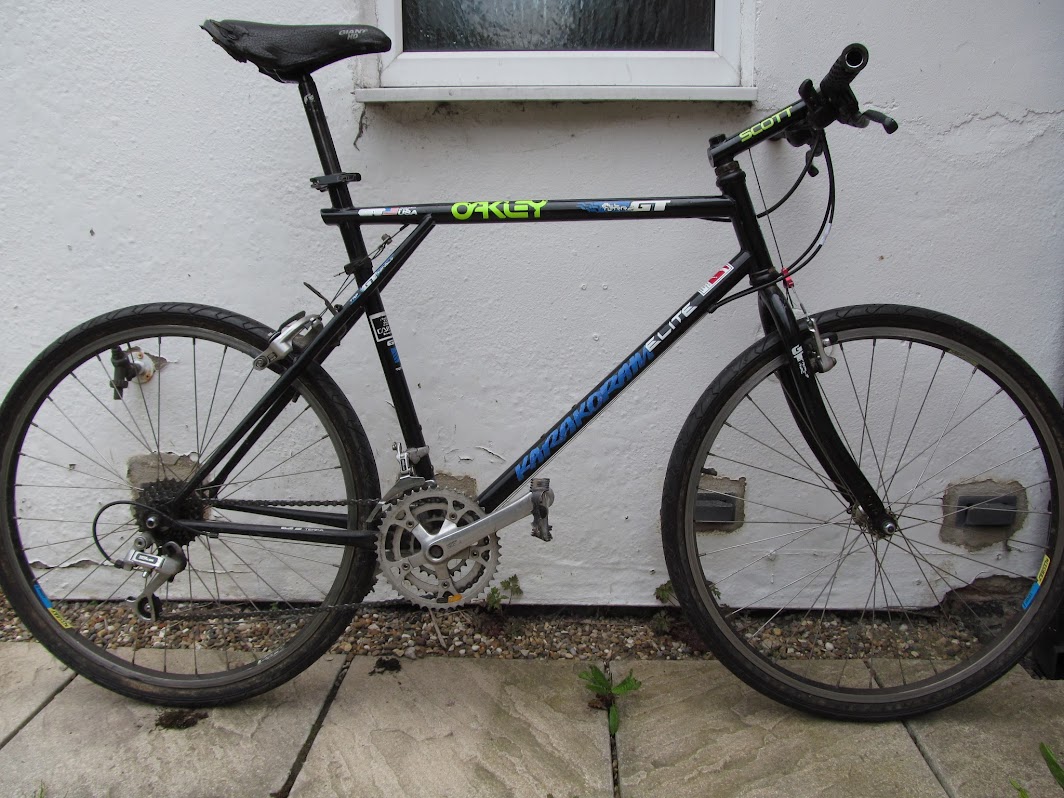 It was most the original components and most importantly the paintwork is in reasonable condition. I was hoping to be able to throw some off-road tyres on it and use it straight away and then give it some further attention when I have some other bikes rideable, but unfortunately most the bearings could do with replacing (especially the headset) though the bottom bracket is very smooth. Also, the original bars have been cut down to a stupidly narrow size, which there's no way I could contend with off-road

Still, I'm very pleased to have got hold of one at last and I'm hopeful I should have time in the summer to replace the bars and headset and give the rest of it a good service.

Nice , I like these , narrow bars = old school trails
Perfect

I don't have the finesse for bars narrower than shoulder width and these are cut to 460mm, but doubtless when I replace them someone will have a use for them.
J

Black looks good, very good. Loving the retro Oakley sticker on it too.

GT Fan
What tubes is this frame made of? Maybe one of those stickers can tell...

Details are listed here: http://www.retrobike.co.uk/wiki/MTB_Frame_Database and I really should make an effort to add more to the wiki.

I have a picture of the tubing sticker somewhere, but if I don't find it I will take another.

and the Elite had a blue decal which I can't find my picture of at the moment.

I think later they used the pink decal for the seamless tubing:

GT Fan
Cool. Thanks. My standard Karakoram (not Elite) got a some Reynolds sticker on it. I thought Reynolds were more expensive than Tange but apparently not... a bit confusing.

That would be a later year Karakoram then? Something like 1996 onwards at a guess.
You must log in or register to reply here.

GT Karakoram 1998 - I started a build by mistake