Could we have a picture of the brake levers please?
M 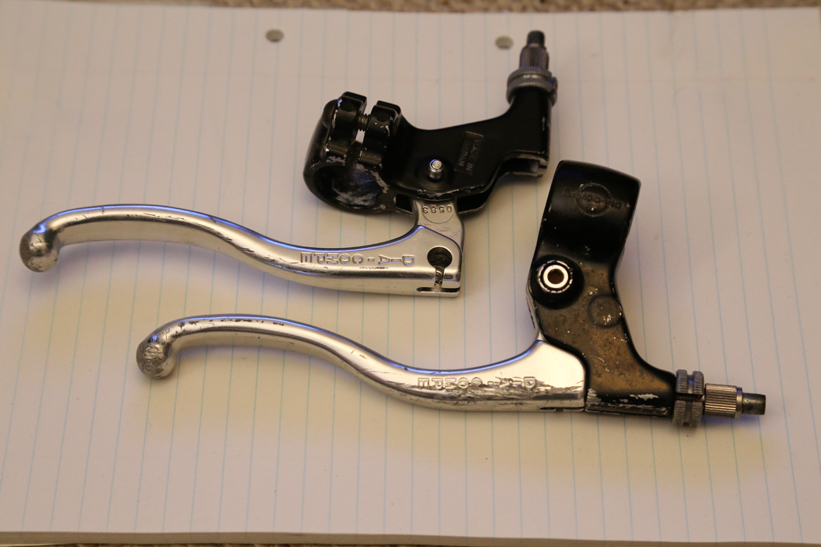 Standard Diacompe jobbies of the era. They've seen some use and one has a very nasty scrape but I've secured some much nicer ones for the rebuild.

Me and a frame-building chum were discussing that distinctive rear cable stop just recently on another thread. I'll interrogate him again on the possible origins of the frame.
M

The rear brake cable stop identical to all the other very early Saracens and Saracen built Evans bikes that have popped up here over the years so I'm convinced it's a Saracen. I'm also now fairly convinced that the "special features" on this bike were mods made by an enthusiastic amateur a bit later in it's life, probably when it was resprayed yellow.
There are a couple of minor differences to the "Evans" era bikes: there's no "Saracen" pantographed in the top of the seat stays and it doesn't have any rack bosses on the end of the forks or below the cable stop on the seat stays so may well be a particularly early model.

Ok but just bare in mind the MTB frame builders parts bin was very limited when this frame was built so many frames were visibly similar.

Here's my 'mystery' early MTB frame that is still on the site somewhere - it was never really established what it was but it was a lot of fun building and riding with its Argos gloss black and NOS Nitto bars. Lots of fun.

I hope you enjoy yours

Sorry for the pics!

I hear what you're saying but that rear canti cable stop is the one part on the bike that is "hand made" rather than a commercial off the shelf item . The actual cable stop itself is the same parts bin item as used on the down tube, it then has four curved pieces of wire brazed to it. It's clear to see why no other volume manufacturer did this (and Saracen soon went to a "standard" single piece bridge) as the manufacturing overhead is high compared to a single piece bridge. It is very pleasing to look at though which is probably why specialist frame builders like Dave Yates did something similar.
You've done a top job on your bike, I'm not sure I'll be able to match those standards. (I'm already crapping myself about how I'm going to get the decals on straight)

a bit of masking tape first should get them straight - and thank you, I'm a bit lazy these days with riding rather than spending absurd amounts of time trying to get something shiny

My framebuilding chum reckons its a pre-production model. The rear brake bridge as you say is totally fabricated - whereas the rest is entirely standard - hope this helps.

Just to mess things up, as a kid I grew up in Leeds and I am pretty sure as a kid I saw a Bob Jackson Col climber with a similar canti bridge. But I have nothing to prove this so yes would think its a Saracen. If only because they "probably" made more of these than Evans.

I have however a conventional bridged frame that does have pantographed ends (when you would expect it not to) so probably there was some crossover / they used what was to hand. It has ZE dated suntour hubs, Oct 83 dated canti's and an ZG dated front mech. and the same levers (I think later versions don't say diacomp on the clamp) Bang on with yours.

However it appears your rear wheel is laced to a rigida rim? I couldn't see what the front is but don't think its the same? Whereas my first Saracen which came with wheels, is laced to Araya 7X rims rather than the rigidas. The arayas had been about since 1978 and I can't find an early bike with the rigidas (ie stumpy, S&G muddyfox) I am guessing Saracen would have got their parts from Ron Kitching who were Suntour importers? And maybe gone with parts the same parts as the bike they were allegedly copying? Ron Kitching 1984 catalogue (scanned on Disraeli gears) lists all the parts including the mitsuboshi tyres and mentions they stock Araya rims (its about p45 - ish). I think RJ Chicken would have imported Rigida but don't know when they would have first appeared.

It looks like Saracen never put date codes on their bikes (unless the post code on yours starts DE )so guess will never know what month an actual frame was built (although we are sure with these the year was 1984). But in an attempt to win "who-owns-the-oldest-Saracen top trumps" I am going to suggest that you might expect a really early Saracen to have Araya rims?
M

Both wheels have the same Rigida (made in France) rims. 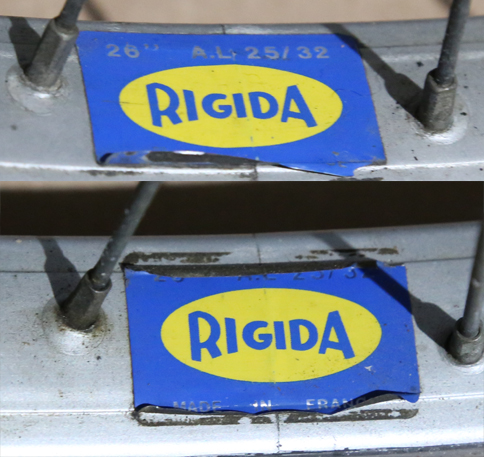 I've found a couple of later Conquests on the net with the same rims so you might have a point that it's a later rather than earlier model. Although the Knight Cycles article linked in my original posts says that they got their wheels from Knight who could have been using Rigida rims from the start.

Mine is the only "three piece hanger" one I've seen other than the June '84 advert that doesn't have the rack bosses, although some of the later models with single piece hangers don't have them either, so one of my theories was that it was towards the end of the "three piece hanger" run.(The rack bosses have definitely not been removed from mine when the other mods were made, the tubes where they would go are very clean and "original") The one in the advert appears to have the gear cable going along the top of the chain stay which again was at odds with all the real world bikes I'd seen pictures of. It's clear that mine has been converted from under bottom bracket to top bracket cable runs, in a way that I wouldn't have expected a major bike manufacturer to do, so in one way solves a mystery, but at the same time I'm intrigued as to why the advert shows an "over bottom bracket cable run".

As to the Bob Jackson link, it occurred to me that his frames all appear to have serial numbers and mine has none (like early Saracen built frames).

Even if it is an Evans or other brand (and we'll never know) it would still have been made by Brain Staples mob in the "Saracen" factory so I'm totally comfortable putting a Saracen sticker along the down tube. Time to stop stressing about what/when it is and get it built so I can ride it
You must log in or register to reply here.