i was looking at the rather lovely Clockwork Orange bike and noticed the rite-hite (spelling?) thingy , I vaguely remember them when they came out so Googled about them and ended up on a museum piece about the first MTB the Breezer !

In the days before MTB , we as nippers used to have trackers , usually a racer frame , with 26 x 1 3/8 (I think?) wheels , with cycle speedway tyres , motorcycle handlebars and brake lever , usually only a back brake , if you were really flash you had a Sturmey Archer 3 speed hub , but the hot-fix was a small childs bike front chainring welded to more normal "adult" cranks .

This was among a small group of friends in Bournemouth ( lots of heath and common land back in the 70s), but I wonder did they exist anywhere else ?

Thinking about it more , there was a cycle speedway track locally , and those bikes were similar , so maybe that's were they came from ?

I thought this was going to be a thread about the 20" knobbly tyred bike with front suspension that pre dated BMX by a couple of years. Raleigh grifter era ?! They were only available in blue ... I canT remember who made them ... I had one and the bottom bracket was for ever coming loose :-/

They were called trackers btw.

...and I thought it was going to be about the security devices that you can hide inside the frame to trace stolen bikes...

Don't remember them .
This was mid 70s before BMX .

I do Remember them actually though we called them "rig ups" usually an old racer frame with "cow horn" speedway bike style handlebars in an ill fitting stem that's would have to be shimmed ... By a screw wedged in it :shock:
W

I seem to remember the handlebars we used were slightly smaller diameter and needed "shimming" witha piece of Coke can !

I remember the bikes but theres precious little on the Googly. Drop bars on backwards and so-on.

As for that wee full sus thing, I remember seeing a yellow one around Searles Holiday camp in Sunny Hunstanton in the early 1980's.

*but not this one 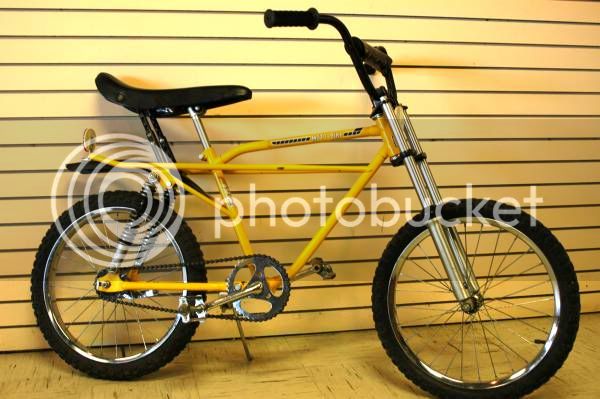 And Grifter bars were a common site on 'racers' 'round our way.

you might find this link back to the 1940s interesting...

Everyone had trackers at my school in Coventry in the early 80's. We used to spend most of our free time bodging them together - to varying standards of quality.

Most important was to have straight blade forks, so straightening the original forks was essential, as this made them stronger apparently! :facepalm: ...hilariously bad (wiggly) jobs were commonplace.
I broke my forks doing jumps so replaced them with 'proper' cycle-speedway ones from Stokes cycles in Cov. Cycle speedway knobblies were the ubiquitous tyres of choice.
The toughest rims were Westwood/Westrick (?), the modern derivative of the old rod-brake rim. They weighed a ton and when I cut one in half once it was reinforced with wood! We used to wire the spokes together, for 'strength'..
If you were really upmarket, alloy speedway rims were available from Stokes in a variety of colours, but I only knew one lad with those. Cotterless speedway cranks were the rich kids choice too, but everyone else just used whatever they had with the biggest single sprocket on the back. Cowhorn bars defined the breed as much as 26'' knobblies + straight blade forks.

Top kid at school on a tracker was Darren Atkins who used to thrash the local fields jumping brooks', sometimes with a string of young pretenders in tow. I used to think that he'd have made a great MTBer - turns out he wasn't a bad CX rider, a few years later!
I think Darren now runs Coventry Cycle Centre; back in the 80's when it was John Atkins, trackers were so popular in Cov' that the shop sold new, custom bikes complete with anodised cycle speedway rims etc.. I only knew of two kids who had one though and one was 'Akky' himself. A bit too posh and expensive for anybody I knew and not really in the bodging spirit of trackers - but man, I fancied one.
You must log in or register to reply here.