I completed a 1994 Hardrock build last year and found that it was a surprisingly nice ride for a low end tank: http://www.retrobike.co.uk/forum/viewto ... p;t=403447. Soon after I'd finished it, before I'd even written the build thread, Tel, on here, was advertising a '98 Rockhopper frame, forks and a few bits in 'tatty' condition - http://www.retrobike.co.uk/forum/viewto ... 7#p2940417 - which I bought.

The first job was to get it fit to ride and see what it was like. I just used whatever I had and bought some £10 Shimano trigger shifter/brake combo things because I didn't have any 24 speed shifters: not the most attractive but, blinking heck, functionally faultless. Anyway, I'd read that these 'Nitanium' frames were great for riding and, when it was assembled, it really was love at first ride.

At the time, I was quite interested in the modern, fully rigid Pine Mountain and a special edition, fully rigid Genesis Tarn: trekking bikes as much as mountain bikes, I suppose. But at 14kg or so, they're a bit heavy, and 1x didn't really appeal so I thought I'd make the Rockhopper into a sort of retro-mod(ish) trekking bike: over 2kg lighter and a really nice ride quality - springy where I want it to be but not flexing around the bottom bracket. Comfort and reliability were high up the agenda, and I wanted to be happy with how it looked.

Oh! And there has been quite a bit of swapping components until I was happy. It's had three sets of shifters, three chainsets, two cassettes, two chains, three sets of brake levers, two bottom brackets, two sets of v brake calipers, two stems . . . And now I'm happy with it. Modern Deore seemed a suitable level of kit for it, and it has a good reputation for reliability (a bit like STX before it) so it's got Deore V brakes and levers and a Deore rear mech but I couldn't get modern SRAM 8 speed 2:1 gripshift to index so I reverted to SRT-600 from the '90s (the only old part). The saddle is a Madison Flux, my personal favourite, and the chainset is a Sunrace M9 44-32t (800g, about £45, and so far so good). Like the Hardrock, I wasn't going to give it any decals but this one looked a bit bare without them, so it got just a few.

Powdercoating isn't as cheap in my area as some: it was £110 but I think a good job was done. All told, it's probably had as much spent on it as it would have cost new in 1998 but I'll have racked up approaching a thousand miles on it since last summer and I expect many more over the coming years. It is what I wanted: a retro-mod(ish) trekking bike. Anyway, that's enough waffle; here are the pics:

That's pretty much it for this one. Next up: a StumpJumper.

theyre the best bikes in the world these rockhoppers..! they ride so well.. even now!

I may be slightly biased though.. have owned one since new in 1997.. and its done everything.. raced DH with a bomber Z1.. been a dirt jumper.. been on huge XC days out.. commuted.. been a rigid singlespeed..

its currently set up with 700C wheels as a sort of 'gravel / road' flyer.. took my daughter for a ride on it yesterday on the macride.. 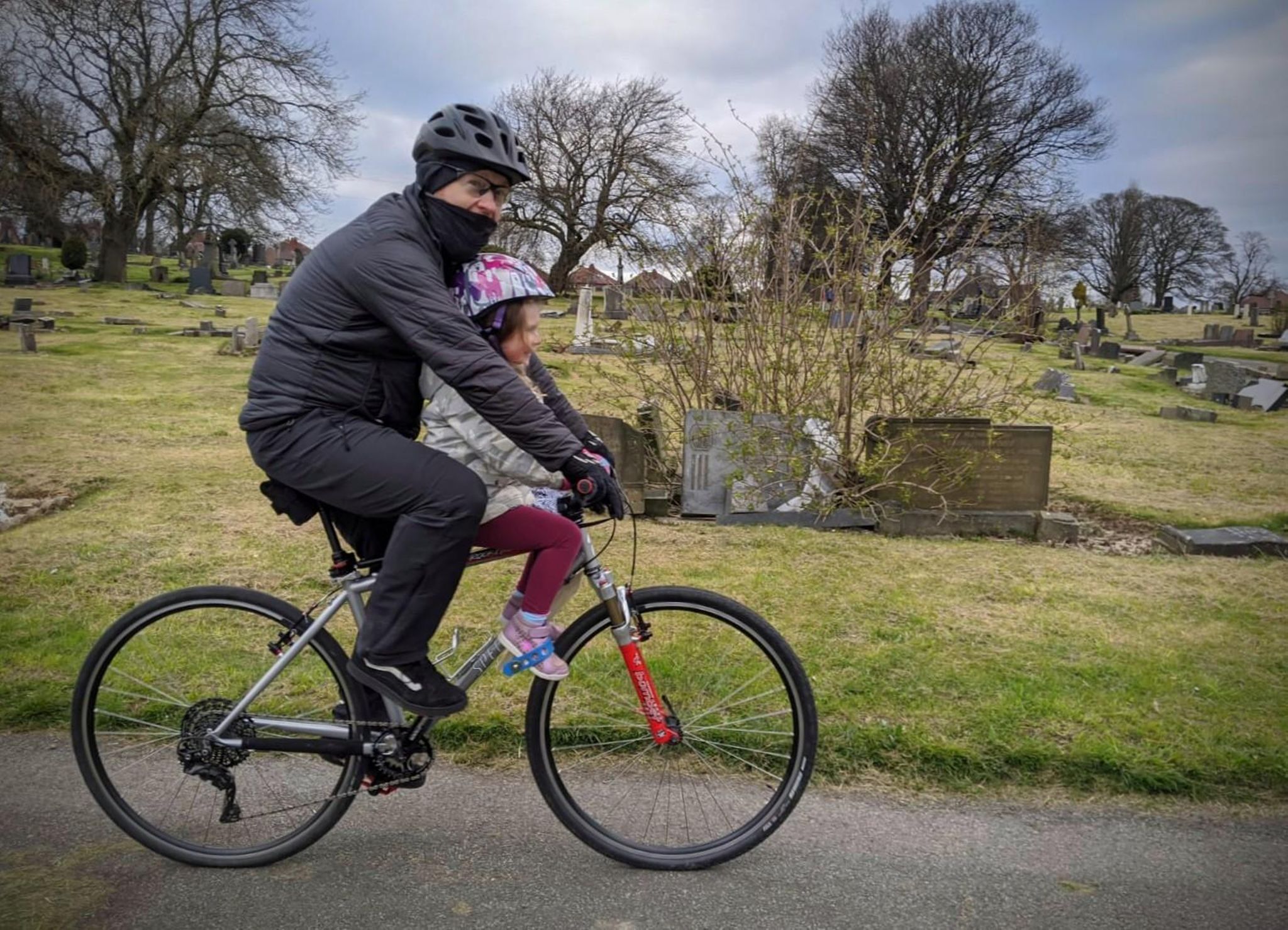 one of the best 'mods' i made to mine was getting a 30.4 to 27.2 seatpost shim.. allows the use of nicer posts for an even comfier back end!
C

Thank you. The colour is actually lighter than I originally wanted - I wanted a slightly darker, air force blue - but I'm happy with how it turned out and I think it works with all the black components. I wondered about getting a shim and might do at some point: at the moment it's got a BBB Skyscraper seatpost, mainly because it's an inline post. But the main thing is, as you say, they just ride so well. I just love its ride quality. It looks like yours got your daughter's seal of approval too!
C

Cool. Used to race downhill on a steel Rockhopper back in the day with a set of rockshox quadra up front. Snapped the seat tube at the BB shell. Must get one for old times sake I recon...
S

Thank you. Here's a scenic pic, just for the hell of it.