Show us what you did today, thread

gmac123":ga6hmypm said:
...even read of a local legend of a nazi survey landing in Oz.. can't remember the details, one that's not made the history books but an interesting story none the less.. canny find it :facepalm:
Click to expand...

I know of several Japanese landings from a submarine in the Torres Strait.

The submarine commander had worked in the pearling industry and was friendly with many of the islanders who had been crew with him.

They used to come ashore peacefully and trade for fresh provisions. They didn't need to survey - the Japanese submariners knew those waters like the back of their hands because many of them had been pearlers.

(I got this straight from the horse's mouth in the late '70s, i.e. from the TS islanders involved because I used to work with their sons and was a regular guest at family does. I just wish I'd written it all down now, but Mer and Saibai come to mind)

That's awesome Brian!!
Funny how you "just happened" to have drop bars and a full toolkit in your luggage eh?

Jamie, I know the ANZACS were everywhere.
I also Know Gallipoli is a major thing with the ANZACS from WW1
My fathers fave film is Gallipoli with the young Mel Gibson.
A steep sloped mine shaft in one of my local pits, when we had coal pits was named the Gallipoli Brae. Great uncles of mine were in those pits and were at the battle of Gallipoli. My Great Uncle Walter served in the Royal Scots at Gallipoli and his company Commander was Lt. Clement Atlee who went on to be the Labour PM who brought in the welfare state. Further the longest serving Labour PM of Australia was apparently Andrew Fisher who came from the same village in Ayrshire as my Great Grandfather who incidentally is also a Fisher, both were miners in the same pits and there are possible links :?
So Australia its soldiers its politicians and a linking battle all make me applaud you guys.
You Ozzies were great in WW2.
A Jagdpanzer just looks odd in blisteringly bright sunshine is all

And now for what I did at the weekend...

Every birthday I set myself a wee challenge. Usually in Inverness it is running up the Castle Steps from the river holding my breath to the top, and then proceeding to the Raining Stairs and doing the same.

Can't do that this year because I'm in Oz, but a better opportunity presented itself. Almost right on my doorstep is a fantastic climb which I think measures up to the Bealach na Bah. I went to do it a few weeks back, but the road is closed for repairs (parts of it have been sliding down the mountain - it's somewhat steep).

This weekend however it was opened for cycling because of a charity event called the Cardiac Challenge. It's a very suitable name.

I figured that could be my birthday challenge, albeit a bit early.

All I needed was a suitable bike. When all you you have is a hammer, then everything is a nail.

In this case all I had was a Giant Bowery single speed, so that was my hammer. 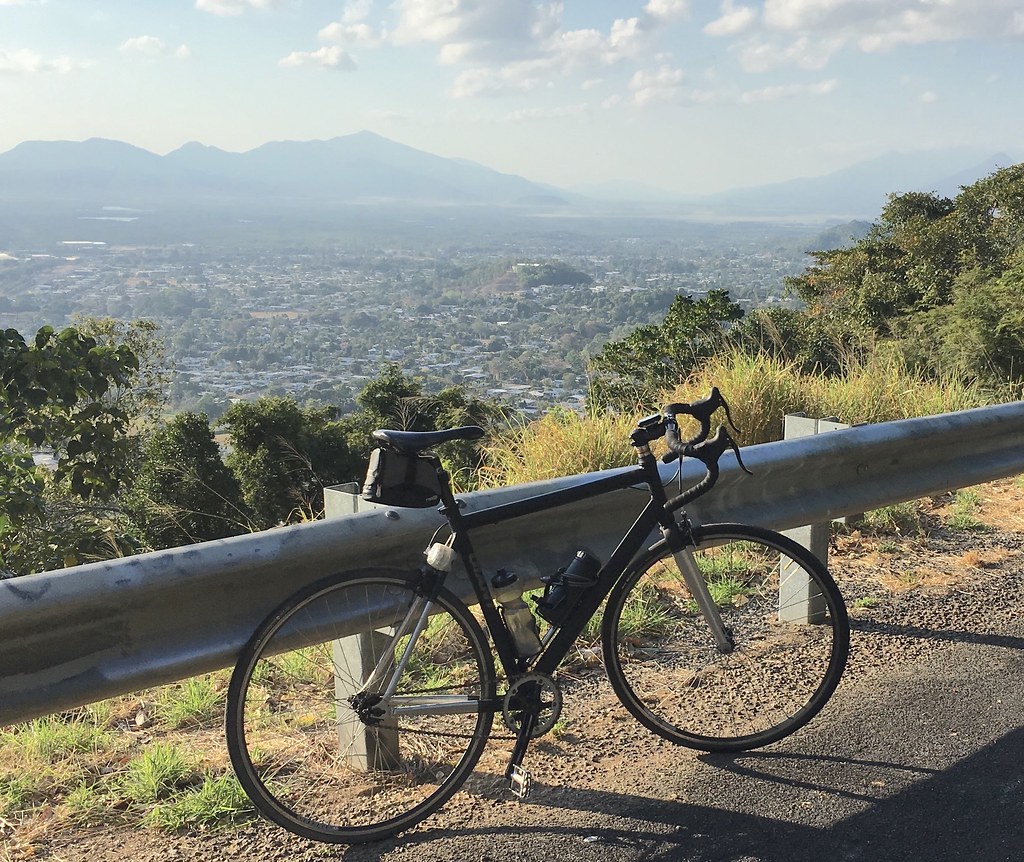 Around the highest point. I think you can get an idea of the nature of the terrain from the pic. 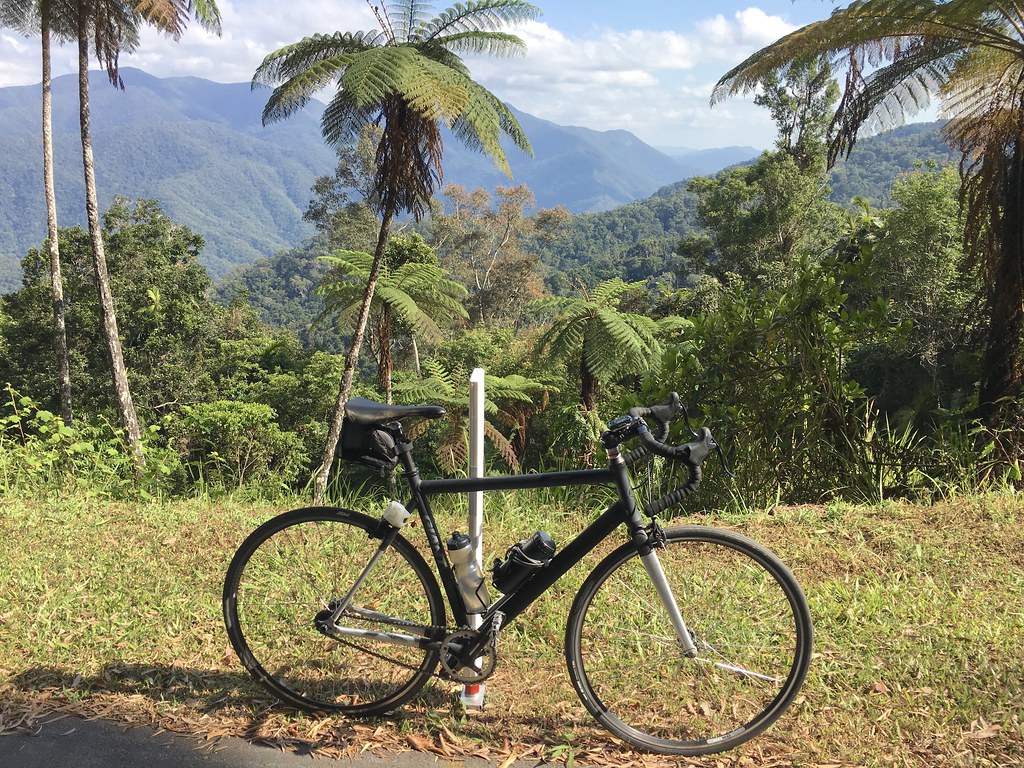 And the proof of the pudding, the end point, Lake Morris at the Copperlode Dam end. 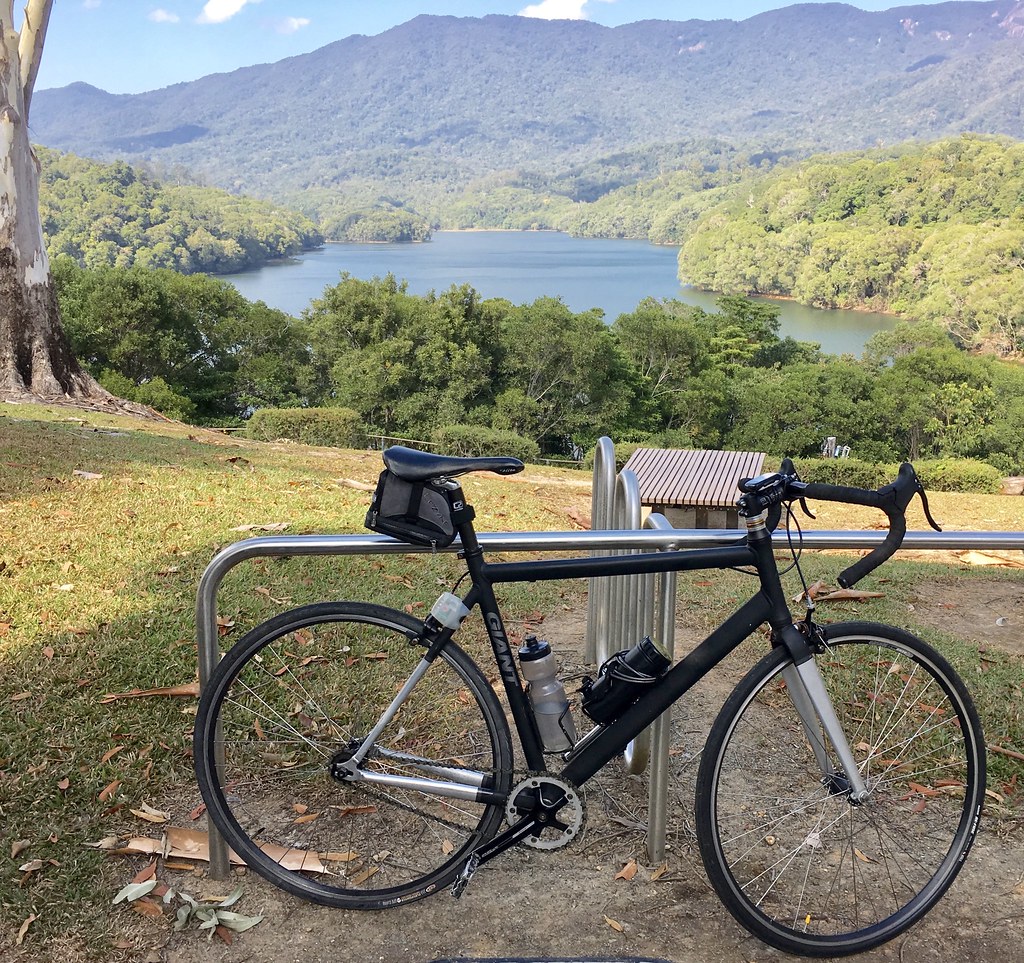 This might give an idea of the nature of the climb. 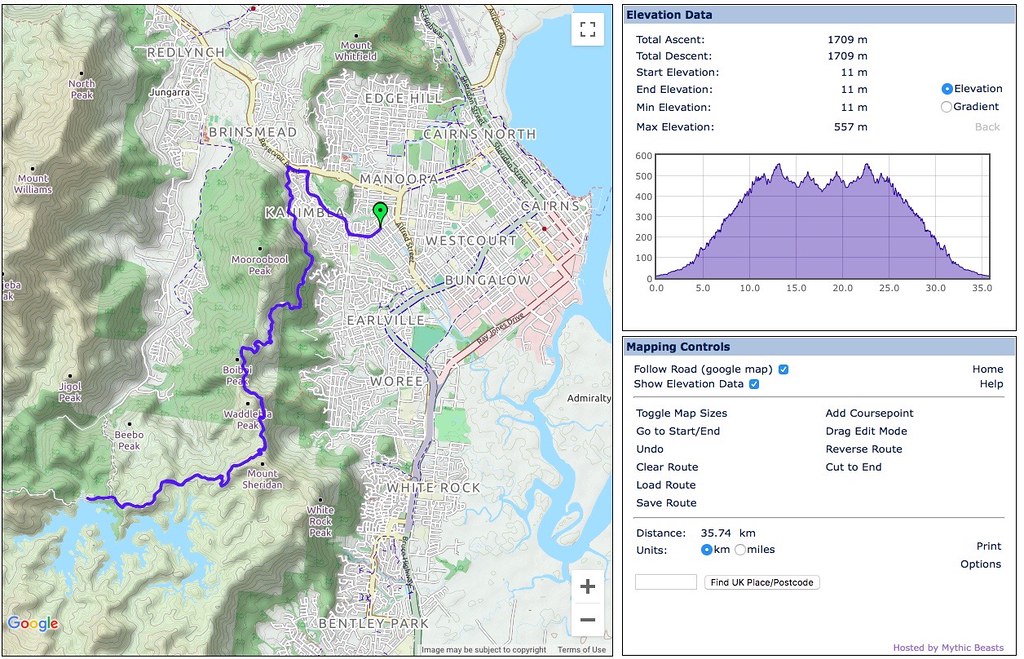 And back to the hammer analogy, I nailed it.

Fair chuffed. It was not easy, I suffered majorly, kept thinking the sensible thing to do was what most were doing and turn around, I was slow, but I got there and best of all I think I was the only single speed to manage it. (I didn't see another).

Jamie, we're doing the Bealach on singlespeeds when I get back. Anyone who wants to join the fun is welcome.

BTW the Giant Bowery is a great bike for climbing SS. It doesn't tie itself in knots when you have to grind up out of the saddle. None of your effort is wasted.
They're quite cheap 2ndhand, if you ever get the chance, grab one. There's no fancy parts on them, but they're a great bike.

Very well done mate! Some effort
I have not been out much the past week and a half after going to Cambridge to pick up the canoe then spending the week in Aberfeldy with my sister and brother inlaw who are over for the cricket. Great week away except for the fact I need to get a turbo for Heathers car and go back to Perth this weekend to fit it. I hope it's dry as I will most likely will take the bike and if the weather permits the canoe for a paddle on the way home on Sunday.
I did stop in to see Sheena on Sunday afternoon but nobody in but will call in next weekend.
Hope all's well with the family.

Well today Jim came down to Fife on a trading mission, but he brought a bike with him (a retrobike :shock: well impressed). So we rendezvoused at Tentsmuir for a short ride followed by a visit to the Crepe Shack. Which was delicious BTW can't vouch for Jim though as I thought he'd dropped his it just disappeared (well he is a growing lad)

That's mobbed, good trails and a cracking beach tho! Well in there lads..

Well looks a good day for it Rob and Jim, sounds like a good one.
I thought I better head south for some of that nice sunshine
Though our weekend was not bike related it was outdoors and it was retro as well as being in a macretro favourite place near Rothiemurcus.
Had to get some chores done and then thought I may have to be in Perth on Sunday to help fix Heathers car that blew its turbo the week before last. So while not sure whether I would be needed on Sunday we all jumped in the van and decided to head to Advie near Grantown on Spey to stay with friends on Saturday night and then head out early Sunday morning to Perth if needed or if not, then we would take the new canoe out for a paddle.
Thankfully I found out late Saturday I wasn't needed as new turbo and egr were in and running but there was an oil leak that should be fixed before driving it home. So we sorted a part and it wont be here until Tuesday or Wednesday, so no need to go Sunday, though will need to go back next weekend to fit and then bring home.
Anyway, at least I had the canoe with me and we could go for a few hours paddling before heading home
We thought we would head up towards Glenmore and see if there was somewhere we liked the look of to put in. Normally with the other canoe we just put in anywhere but with this one being canvas we have to be a bit more selective with the substrate, ie; no rocks. We ended up at the top side of Loch Morlich where we knew it was sandy near the outdoor centre and just parked up and after a short portage was sitting on the edge of the water ready to go. The wind had picked up and there were a few dark clouds rolling in but all was good, we just picked our way round the northern edge and as we went the wind dropped and calm set in with just a slight breeze from the south west meaning we could easily cross.
The canoe was all we had thought it would be and more and with the family all incredibly happy with it as well as amazed at how easy it was to canoe. Incredibly stable but and impressive all round. Needless to say we all had a great afternoon before heading back up the road.
Not bikes I know but just thought I would share. 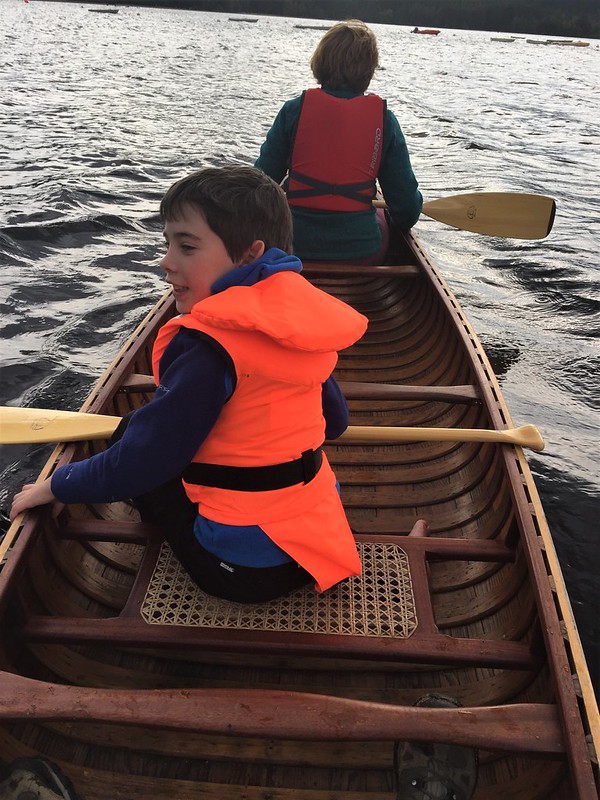 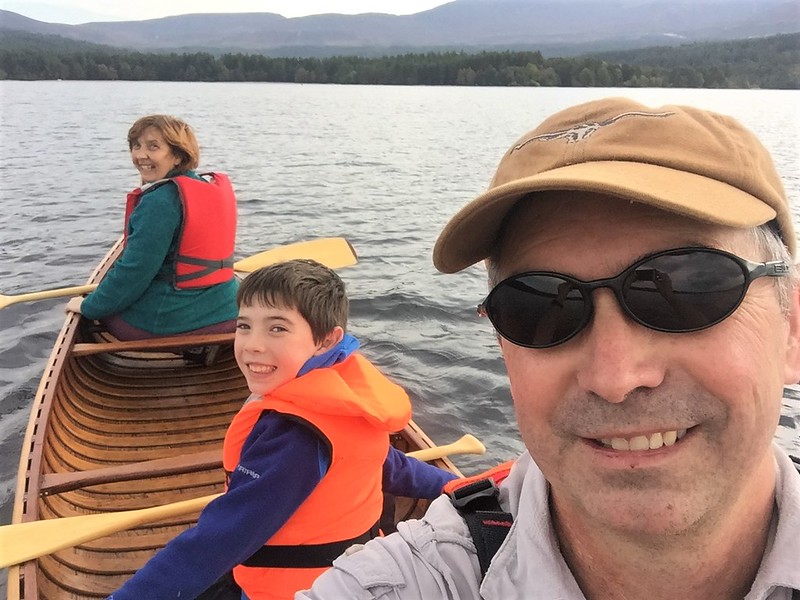 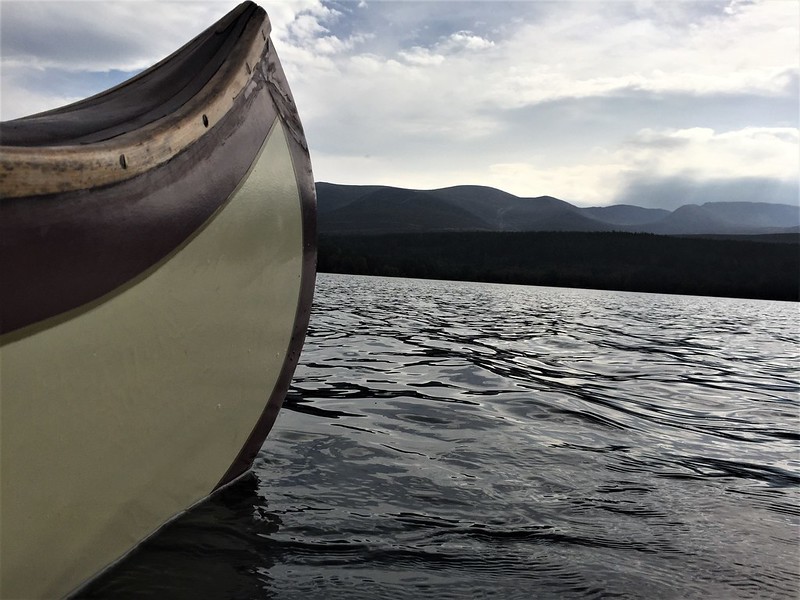 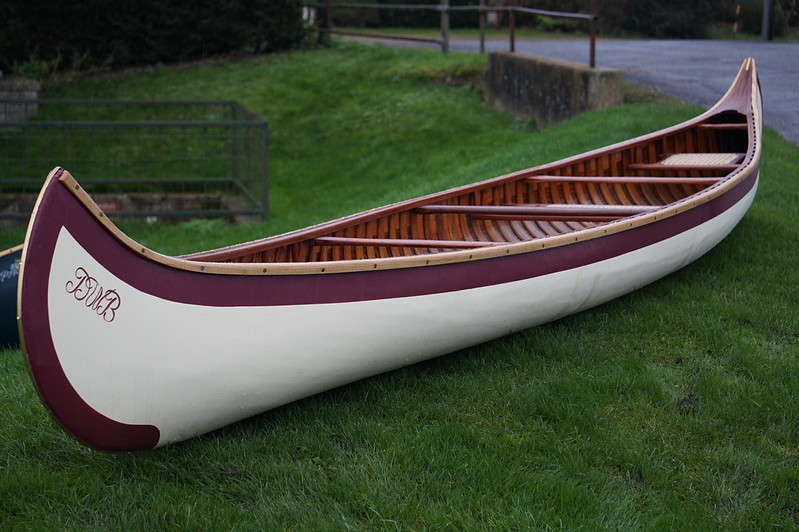 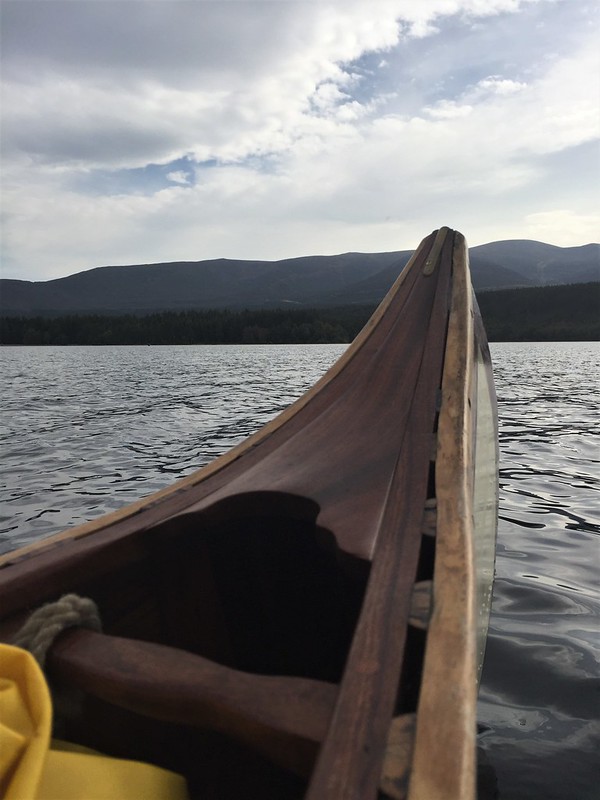 Show us your Voodoo