road Bike of The Month

Welcome to RBotM May 2022!!!
Yes that's right May, and yes, I am aware we have skipped April.
I thought as how things had slowed right down with minimal input into the competition that we could skip a month and come back for May refreshed and with the photo album replenished from all the spring rides everyone has been on
Which nicely brings us to the Out and About theme! Really broad brush this one, basically a photo and a brief description of your bike out and about.
Can't get much simpler really but needs to be out and about, so no at home or shed pics, somewhere on one of your spring rides preferably.

Usual rules, two photos and a brief description, a link to a build page or somewhere with more information, entries open until the last day of the month with the winner decided by a five day poll.

Jamie
Here's an example I made earlier 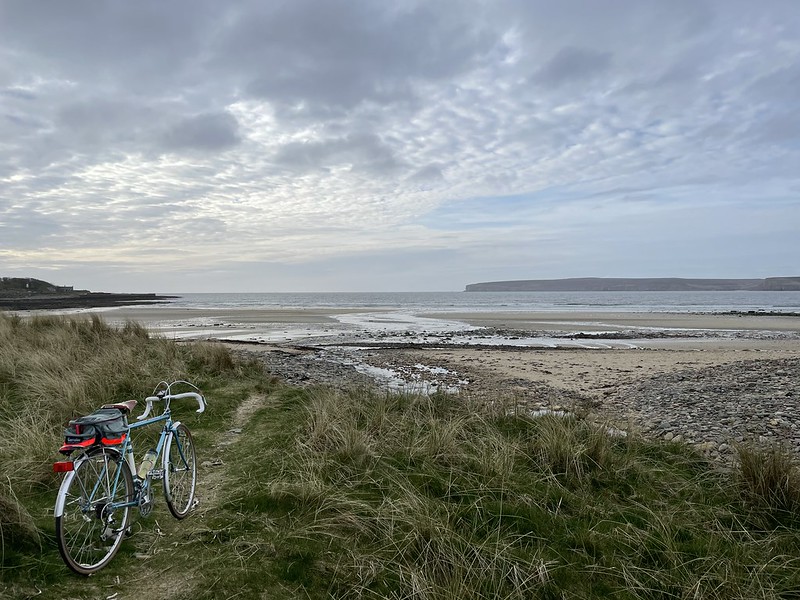 Nice theme, nice photo
I can see voting being as much about the scenery as it is about the bike

Hello all, not mucked about over here on the clean side of the forum for a while, but here’s my latest build.
Peachy!’s 1996 Claud Butler Campagnolo Dalesman

It’s my answer to the fuel crises, it’s a bike I can jump on & pop to the shops whatever I’m wearing & whatever the weather.
Originaly dressed with a part Campagnolo Mirage group set & stickers, it’s now positively dripping in the stuff!
Currently getting a lot of use on my 14 mile round trip to my local post office whilst I try to sell enough spare parts here & on eBay to pay for my next project 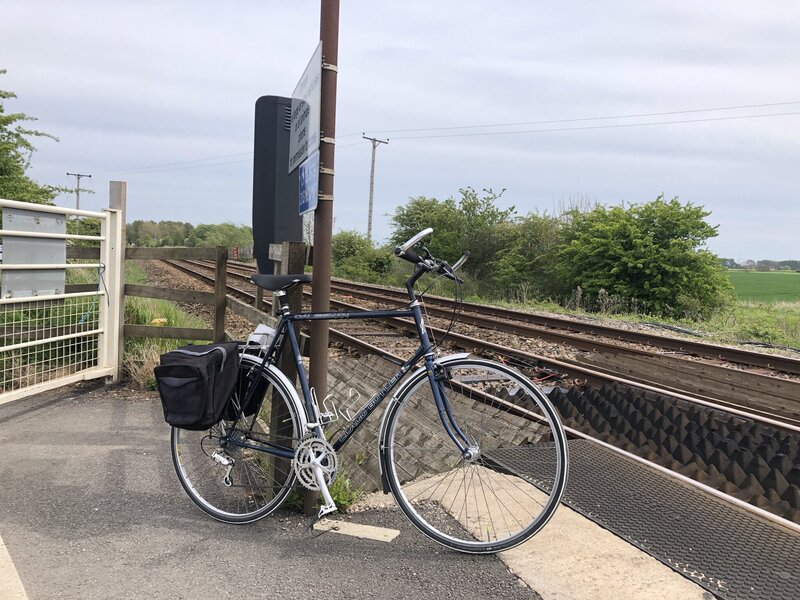 I like the variety here on retro bikes, bike of the month. Here is my support to the botm. Stay tuned, I’m working on a dandy to post later. This is a late 1920s Gloria track frame build. I may have already entered this bike, but I’m closer to 100 than 50 so I can’t remember if I did or didn’t enter before. The blog cops can disqualify this entry if I already entered. I’m indifferent about it, my nickname is Mr. Indifference. So, no bruised ego here. Does this bathroom count as out and and about? I think so, it’s the bike Tele Chanel, not to be confused with the snow, wind, rain or wildlife channel. There are too many black flies out not now, you can’t even breath outside,without choking on them. So, this out and about exercise is the same as looking at your cell phone and thinking your actually a part of society. I just fell off my soap box. Please vote for this bike as many times as possible. Tell everyone to vote for this as many times as they can creatively cheat. 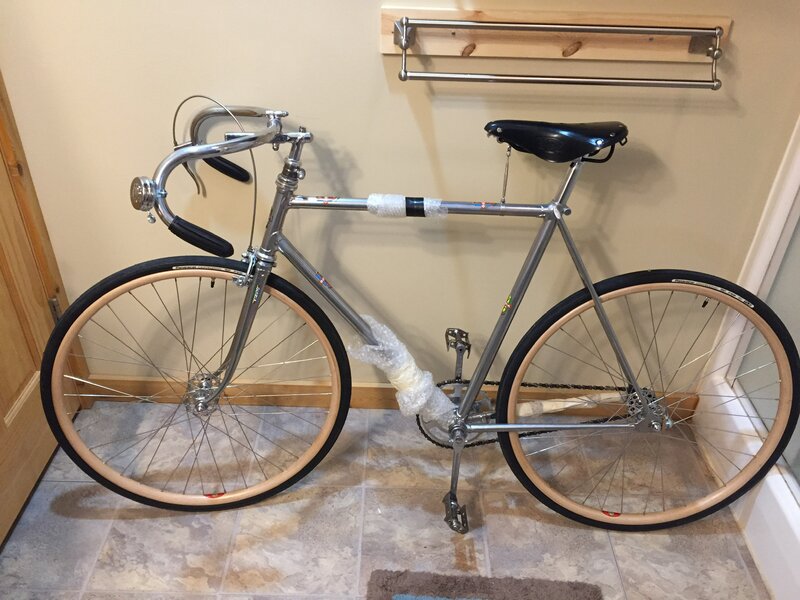 Here my tribute. It has been ABOUT OUT

for just one occasion. A testride with one of my (adult) children. It was a strange experience for me. Like riding bike for the first time. As a captain as well as a stoker... Gitane Rallye 1708 from 1980. To be real honest it was the second time. The first time it was to respray the poor originl paint...

Chucking my WItcomb into the ring. 1979 531 (model unknown), originally made for 27" wheels and mudguards.

Bought from VCBallbat on this forum 6 years ago. It's never really been built in the sense of most bikes on this forum - I chucked some bits onto it and off we went. The frame is on the dividing line between needing a repaint and *cough* having lots of patina. Anyway, it runs around with late 90's Campag Chorus bits. The clearance for fatter tyres (like 28C Conti GP5000) makes it surprisingly fast - faster (for me anyway) over mixed country than my Litespeed, which I promptly sold!

We did a family trip down the Rhine when it was used by my son, followed in 2019 by a post-GCSE trip to see the TdF and finish in Paris.

I popped over to France with No1 son (who has just finished his GCSEs) last week four a short tour including seeing a bit of the Tour De France. Eurostar to Lille, then an evening ride to Cambrai. Then 57 miles to Laon, overnight at the top of the city (hairpin climb) followed by Reims the...

This year my big plan is to ride the Dunwich Dynamo - an overnight ride from London to the Suffolk coast. I've just built up a dynamo wheel, now need to get a few miles in! 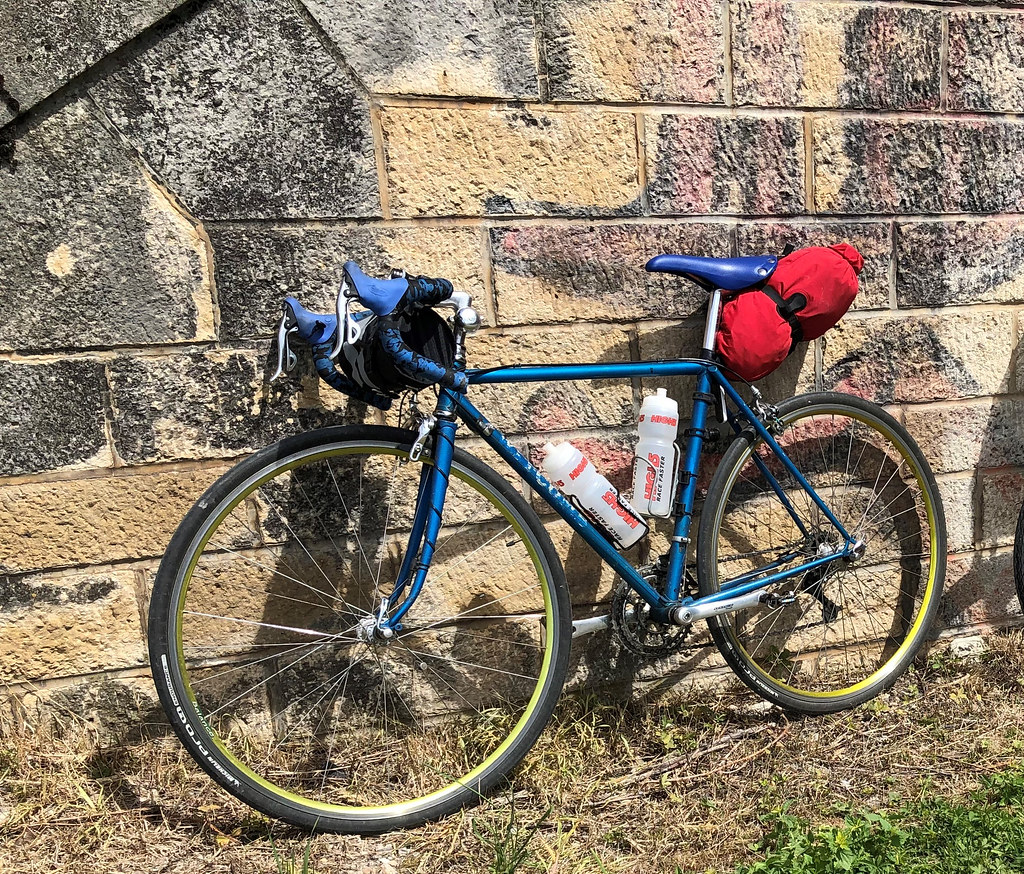 Anyway, there it is in touring trim in France - we travelled super-light and stayed in motels.
Below is in Germany by the Rhine. 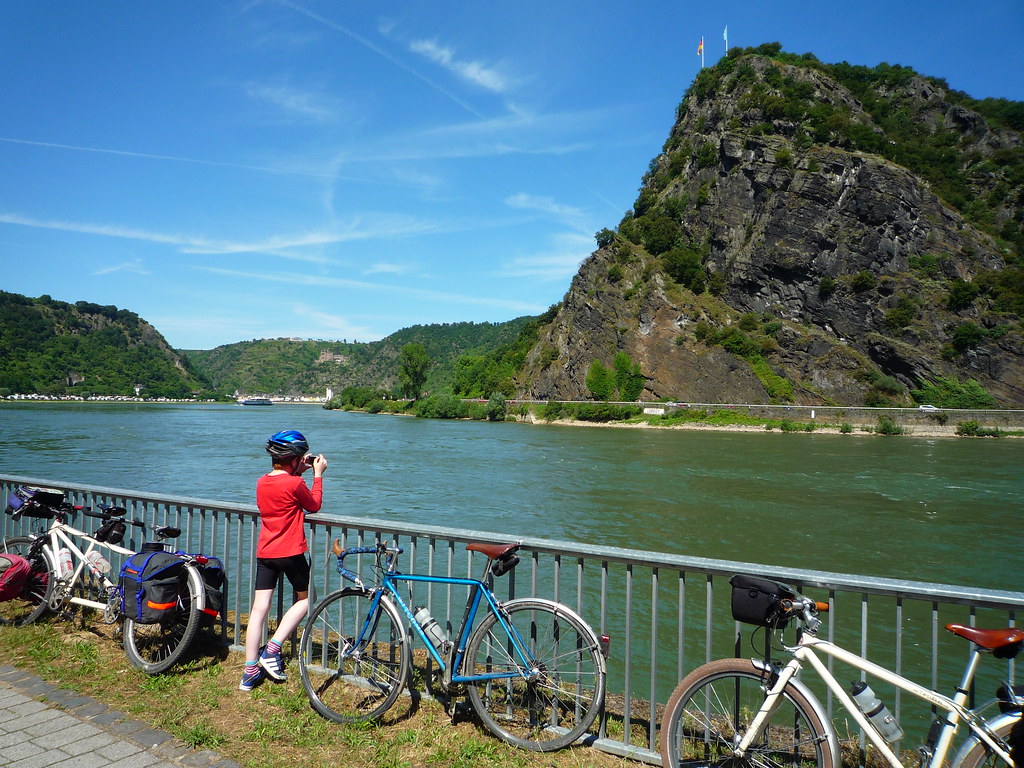 I've just started a thread for one of my creations....never entered a bike in comp before...
maybe I'll just let the entries fill up a bit before taking the plunge! Not sure how the patina'd goes down here

There is always a divide between the lookers and the riders!

Mickeyspinn said:
Right...let's put this old boy on a pedestal and see if he falls over! Nocim is in the ring

This bike for me has been a labour it has taken so much patience and care...at the beginning of the build I had to be brutal ......then brutal again... and yet again! To understand this take a quick peek at my thread I think the first two pics will quickly show what I mean and then scroll on for more!

Well where to begin! I've lost just about all of the build photos with tech devices going kaput..🙄 But I've salvaged a few ...they'll give an idea to the extent I've been through to save this old boy. Many many hours have gone into this....it is not really for the purists as it's not a...

So it's all about the bike right! A collection of angles, measurements cogs, bearings and tubes that end up in something you can ride? Yup.... guess so!
Well I've bonded with this bike it rides with character it's deceptively fast when you make the effort...corners like a train....committed ....like a one way ticket..... it is a hero or be zeroed bike.
Live fast and die old it's the Nocim way

It's built of parts from all the decades it's survived and of a fair few countries and a couple of continents too...plus a few little tweaks and components made by yours truly.... all for speed and glory!

So it's sbout history then right? Well a bike is like a fish out of water without a person to ride it,isnt it? And history is what we experience, learn and pass on...So ....who was the man who built it,
who bought it? who went to enlist for ww1 on it, and hopefully came home on it? who borrowed it,where'd they go on it?who stole it,got drunk and crashed it?did someone find it abandoned in a ditch? Did they flee ww2 on it carrying their family? Sadly I don't know....all I know is that there might be one other Nocim ....so i hope my postings will archive the start of the next 100 years of its history.

So the out and about theme for my ride is the people and events in history this bike has outlived!
It's random and eclectic but all local. So grab a coffee and let's visit some local graveyards

View attachment 629289
This grave ......if big history and world powers intrigue you Google the name...if it is who it's thought to be it's a miracle she made it here!
Bit like the Nocim!

And let's acknowledge these guys...the guys were devils but not gentlemanly however I doubt we'd of won the battle of Britain without them and their relentless will to fight... 306 and 315 sqdns... polish.
View attachment 629296

see that big window? I took the old one out! Local historians wet themselves as the window that came out was 100's of years older than the church....the church is about 800 years old. Walls are 7 foot thick! Crackin boozer opposite...working lunch was three pints...wash the lime mortar down!

And that's a 35 mile historical jolly japse on a 64 tooth ring...think I've earnt a beer