Klein Fan
New build coming up. Some nice guy at the german forums karma'd that interesting and - so it seems to me - quite rare frame into my man cave.
As I am a sucker for those odd early suspension bikes I am really excited to have it.
I think, this will be a rather slow build as I don't have hardly any parts on the shelf. And I am even contemplating new paint. Which is quite unusual if you know me.

So there is that frame, looking funny. And quite sorry for itself. The paint is bad. There is rust. But no holes and no dents and no cracks that I know of as of yet. 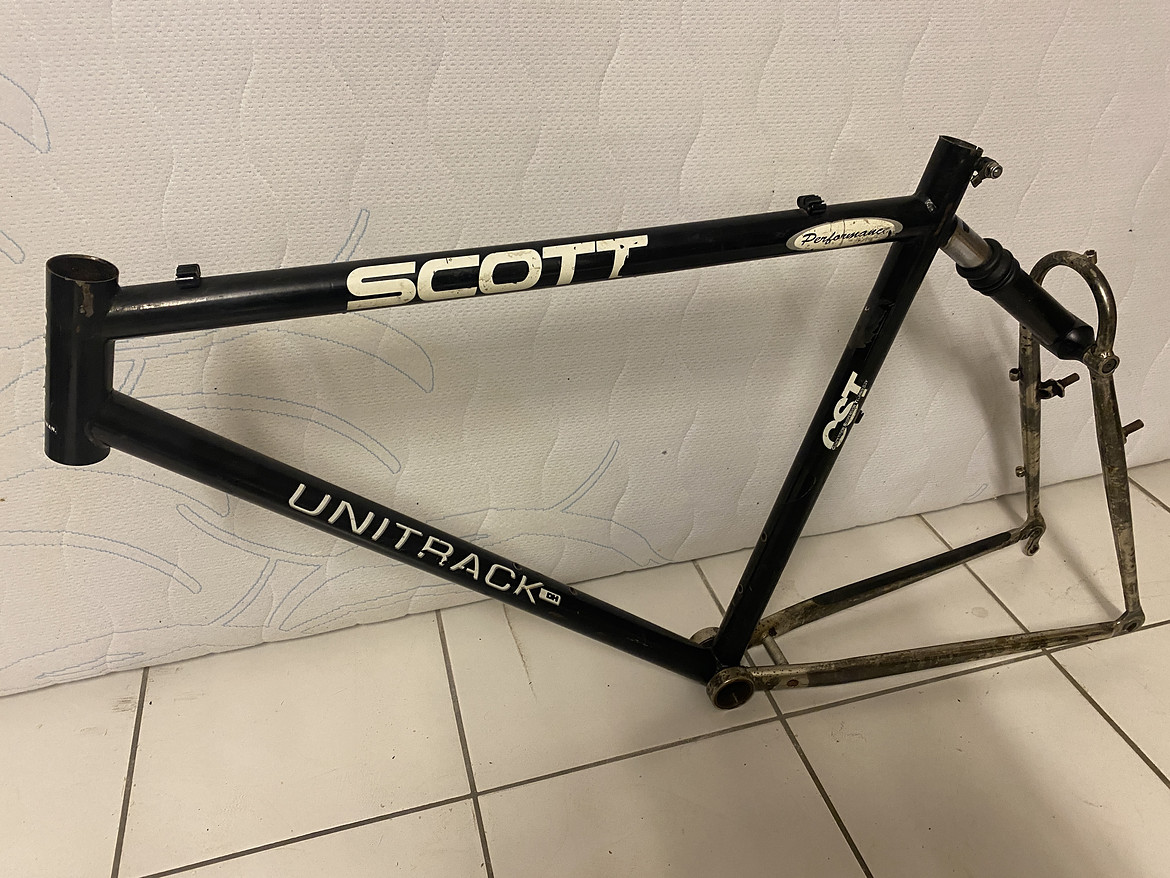 So. What do you guys think? Where should I go with this?

1) Leaving the old paint. I tried to polish the rear triangle (it is chome...) and that dark stain seems to come off quite nicely. But on the main trinagle, the paint is flaky and has some bad rust spots. Those spiderwebby spots, if you know what I mean. I would feel bad leaving it like that.

2) New paint. Keep the original color scheme. Buy new decals. I'd like that. But it's a little bit boring.

3) Make it a Thomas Frischknecht team Ritchey replica.
That one I find very very tempting. When "Frischi" was racing for team Ritchey in 1993 at the suisse downhill worldcup, they took one or two of those Scott Unitrack DH frames and painted them in the team Ritchey colors. He raced the bike for a few months until Ritchey had his own softtail in '94, I think.
I found a few pics online. And I think that bike looks really sharp: 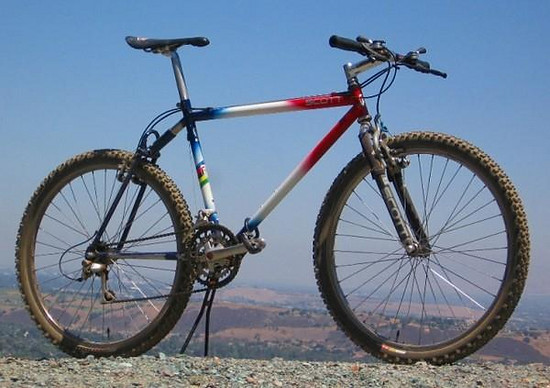 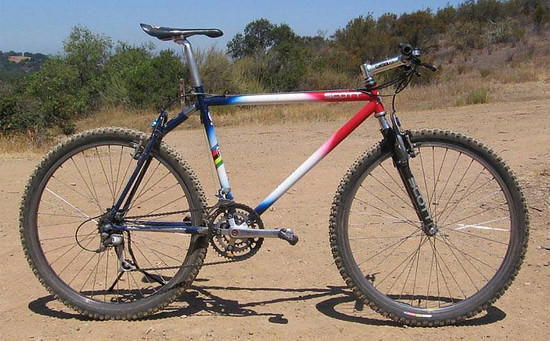 Go with the Frischi replica, it'll look sweet. Remember to post up in my fb group

+1 for the Frischi replica.

Klein Fan
Well. That went down the drain really fast!

Took apart the rear. I was quite happy at first because I was able to crack all the bolts loose with no effort. Even though they did not look like they would. 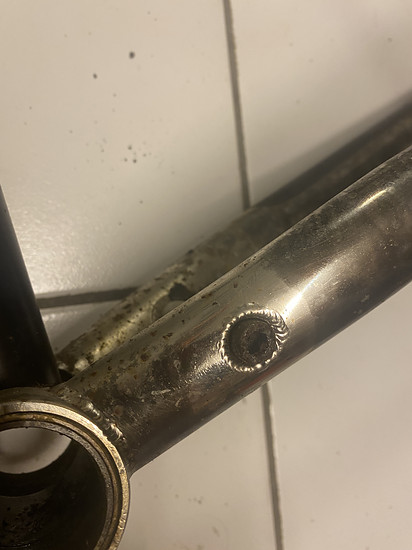 Then I found first - uhm - toolmarkings made by some hero mechanic. 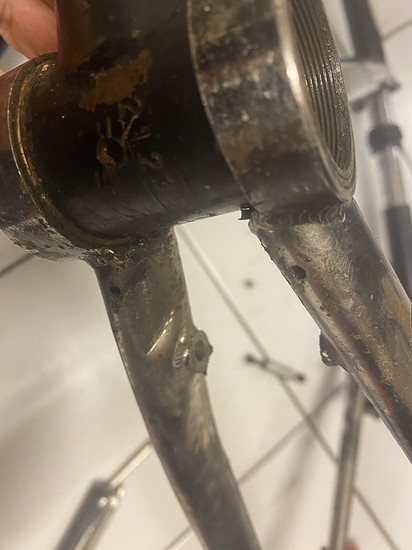 Ok, no big deal. You won't be seeing that sitting on the bike. Go on.
The bushing rings came of ok. I had to use a Aluminium rod and a hammer. 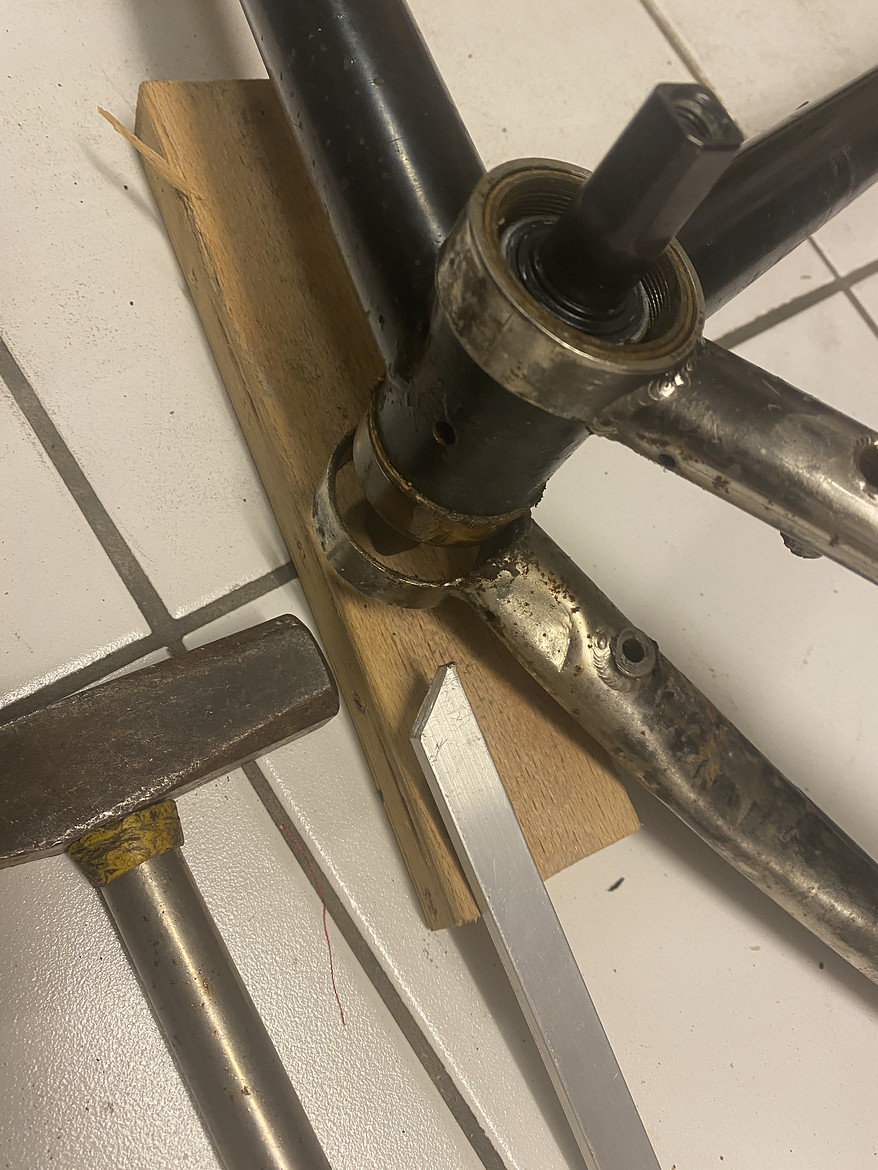 The driver side ring was more stubborn.
I thought at first that was because the bronze bushing had a gouge: 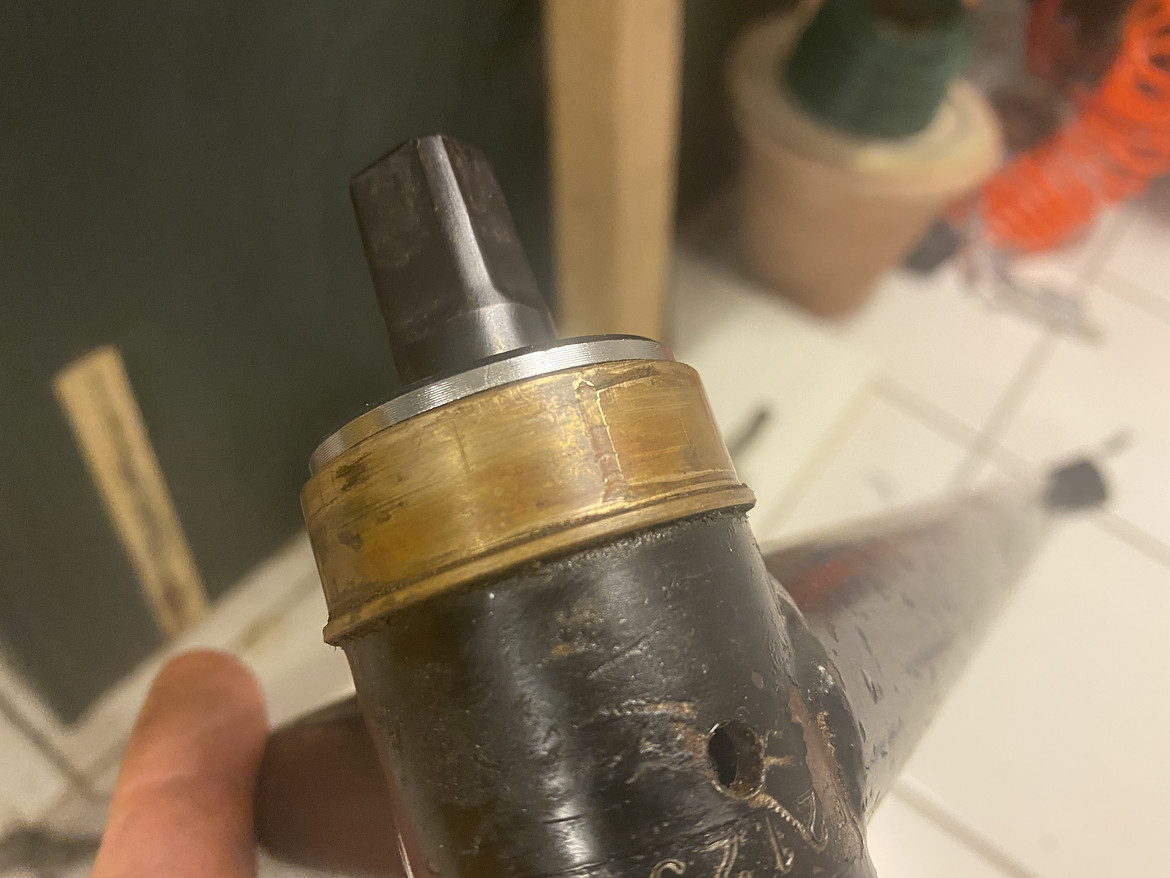 But soon I discovered this: 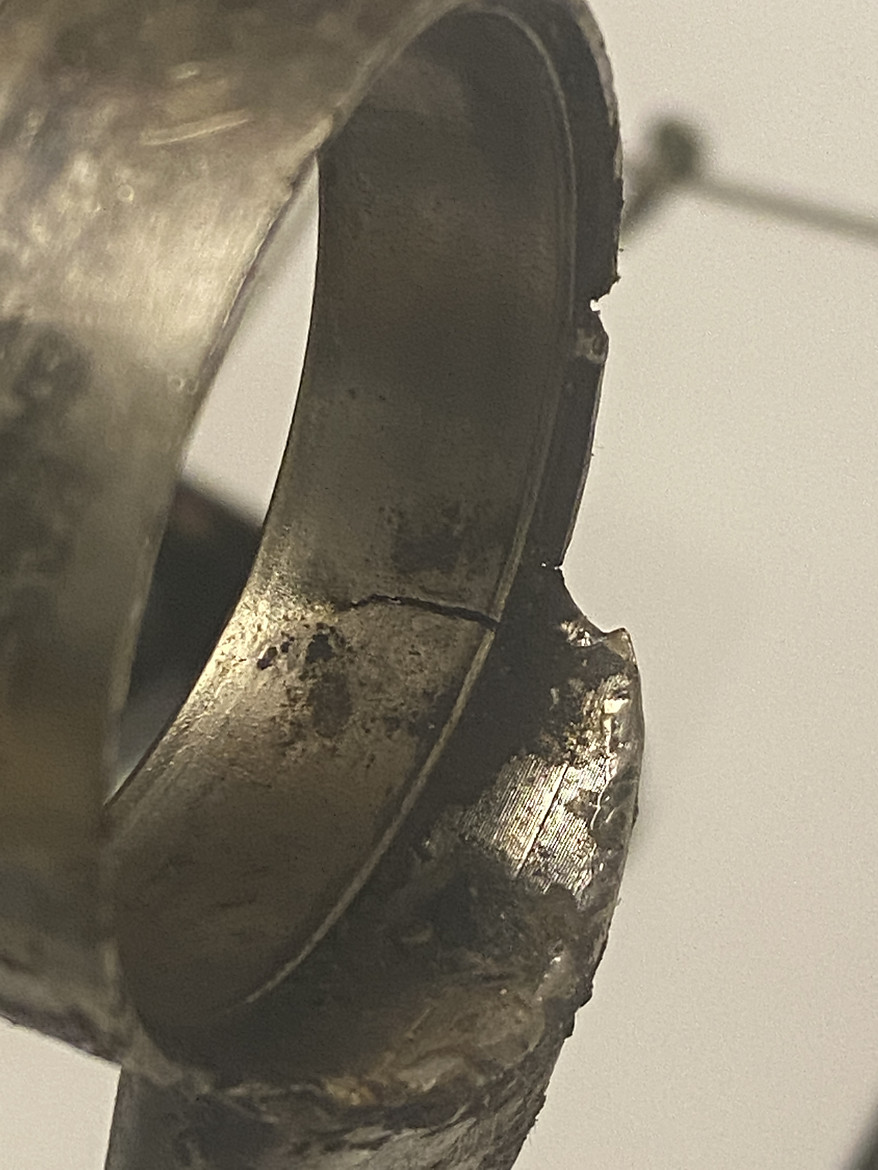 Well crap. I really didn't want so see that. Gutted.

I am sure you have a solution.

Klein Fan
Not yet. Contemplating on buying a welder...
D

Bummer about the crack. I hope you can resolve it inexpensively.

I really like the factory / original look about it. The photos don't show how poor the paint is. I feel that Ritchey team colours on a Scott frame is wrong, even though I appreciate that it is a historic fact. Naturally, its your bike so its up to you to find your joy. 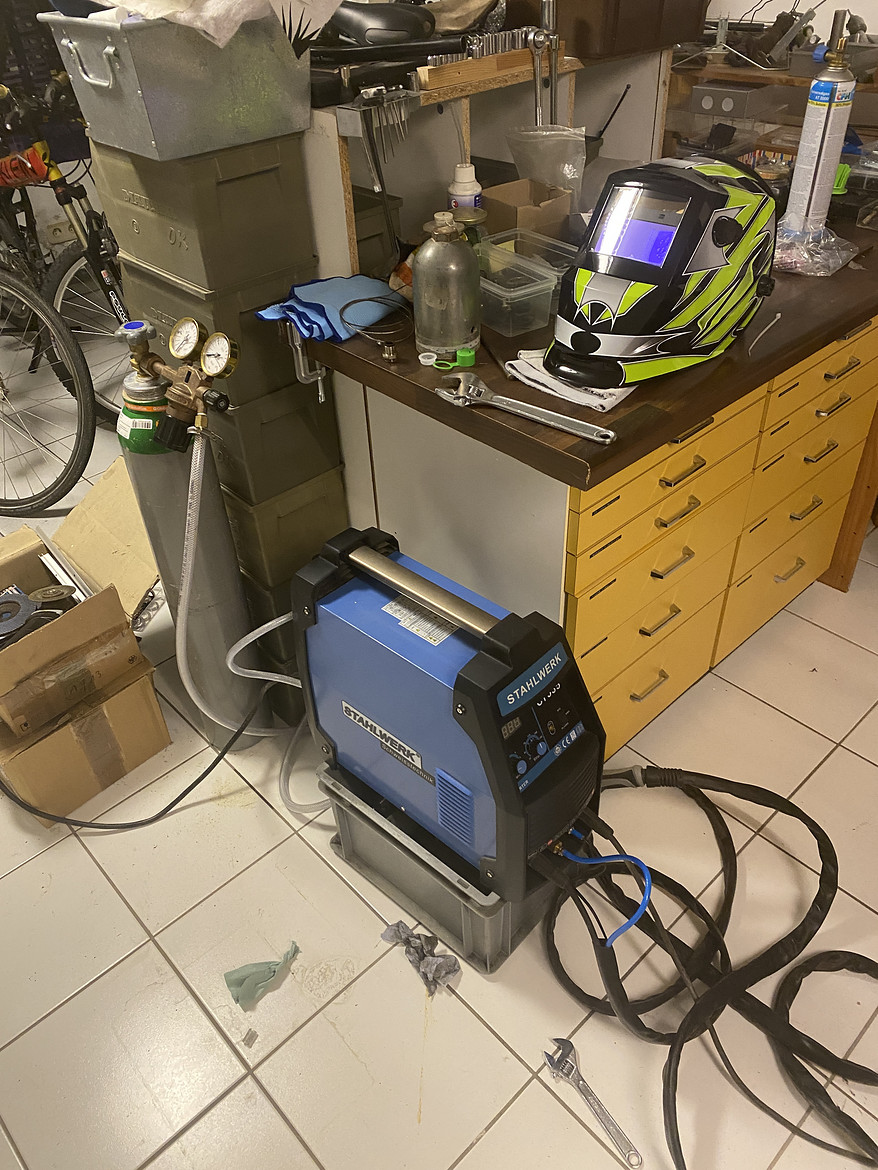 I have to say. There is a lot more stuff you need to buy besides the actual welder.
Expensive stuff. Gas+armature, hoses and fittings and stuff, a helmet, gloves. Then there are the consumables like the filler rods, that depend on what kind of metal you want to weld.
Well. You've got to pay to play, I guess.

My first try basically went like this:
Open gas bottle, check. Adjust gas pressure regulator, check. Clean metal surface, check. Turn on welder and set it to 40A DC (I'll start slowly), check.
Helmet down, it's getting serious... Now press the switch on the torch
aand
A small ark for a fraction of a second. Then Poof! and the tungsten tip desintegrates into a cloud of smoke. 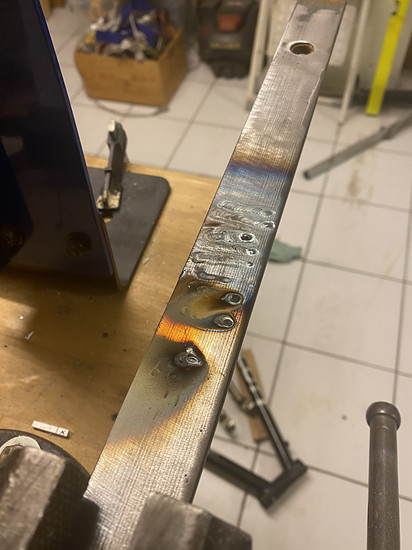 Well. What's the problem? No gas. There was one more lever to open hidden at the back of the welder. Did not find that before another centimeter of the tungsten tip evaporated.

But I'm getting there.

Still waiting for the filler rod to arrive. I'll be practicing without until then.

Klein Fan
The story continues.
After practicing for a little more, I just could't wait to start on that scott frame. I'm waay too unpatient!

So. Here is my attempt.

First cleaned the crack as much as I could. Using Emery cloth, a knife and brake cleaner. Then a file.
Outer: 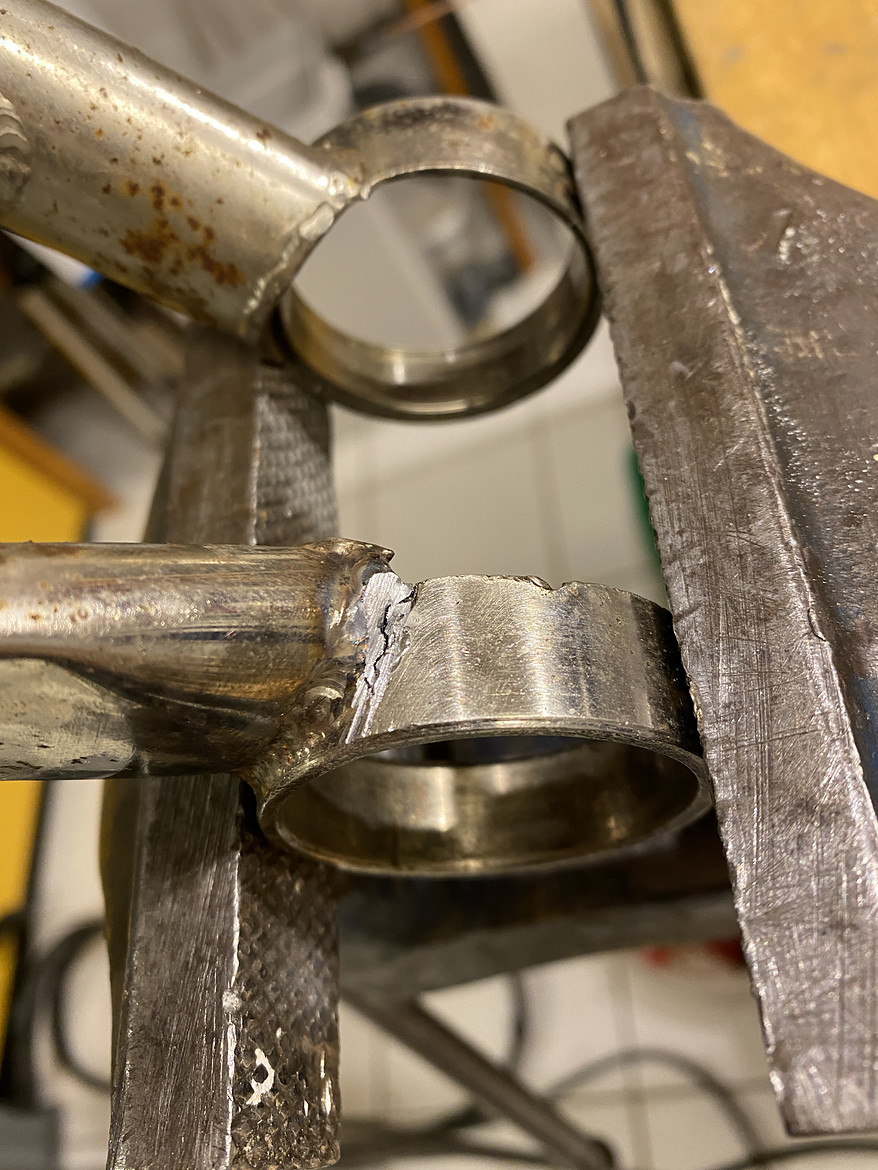 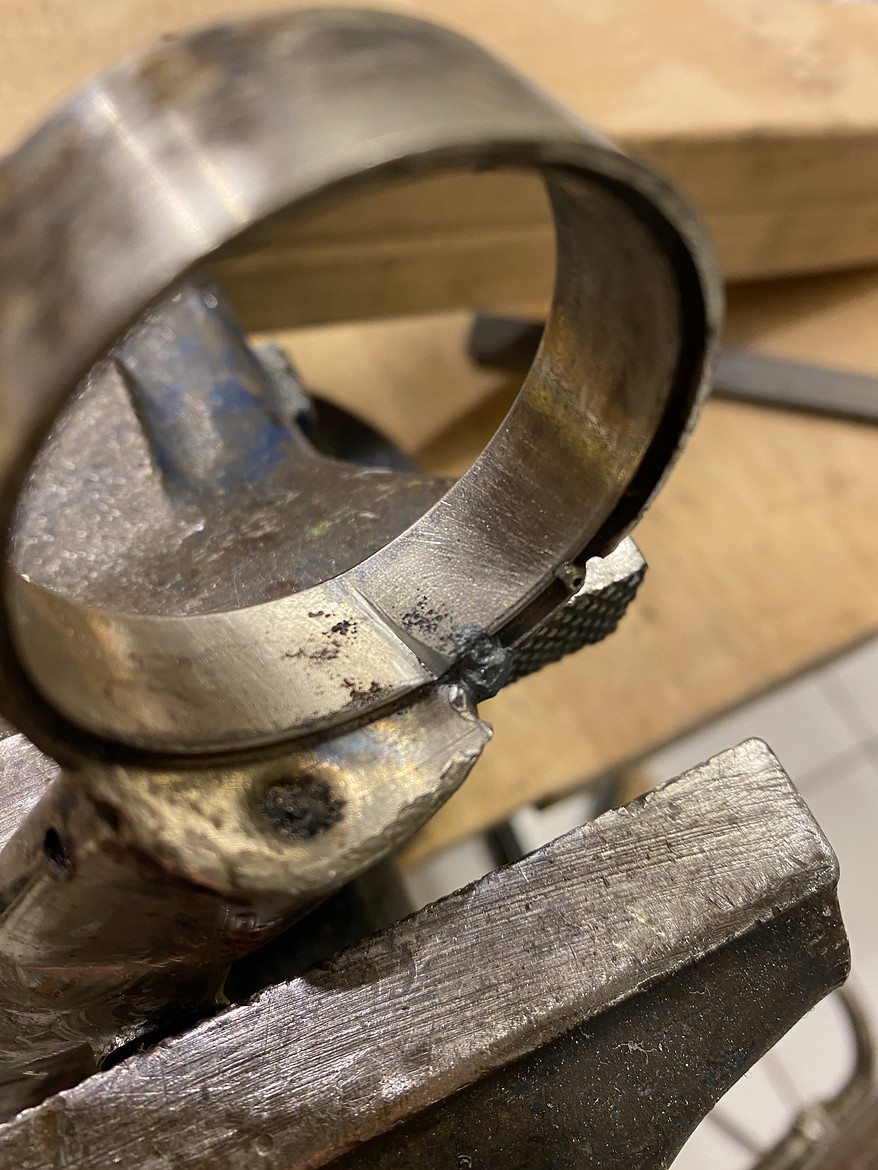 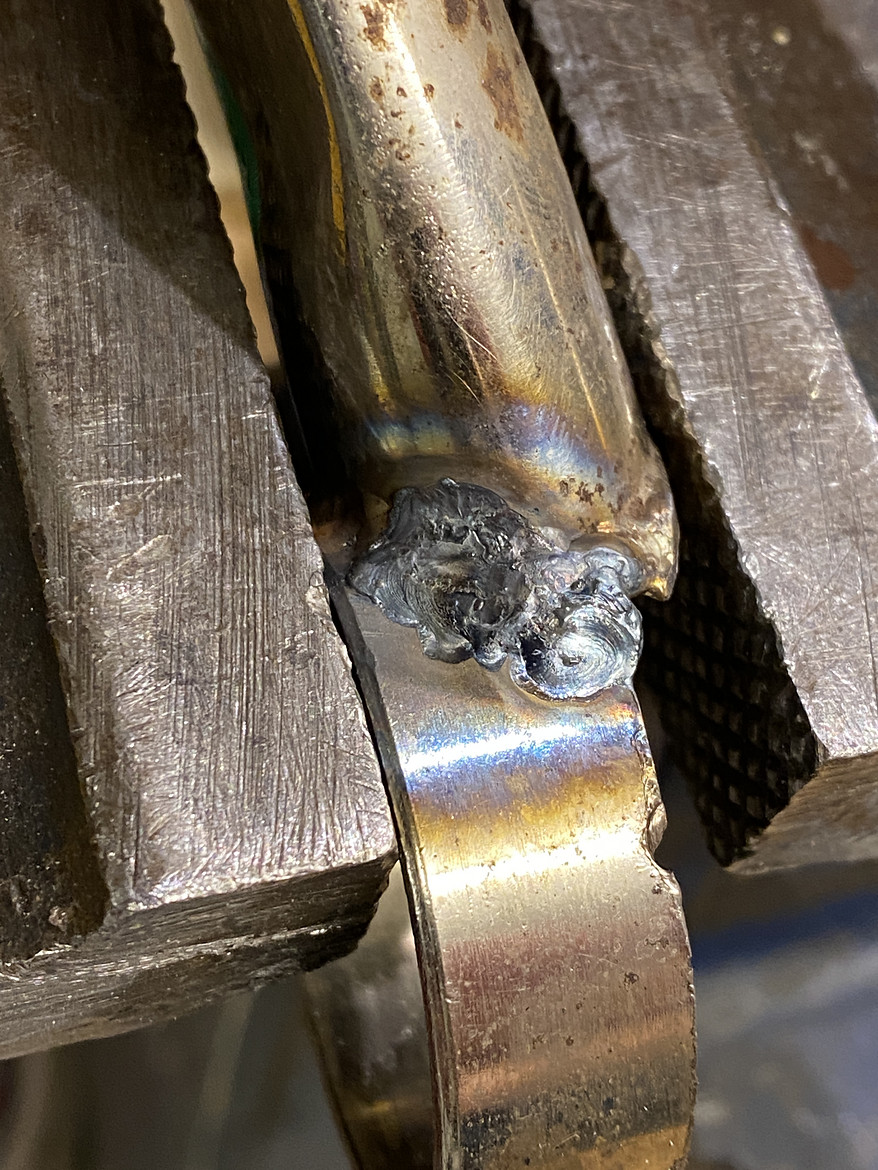 (that gouge on the right side of the ring wasn't me.) 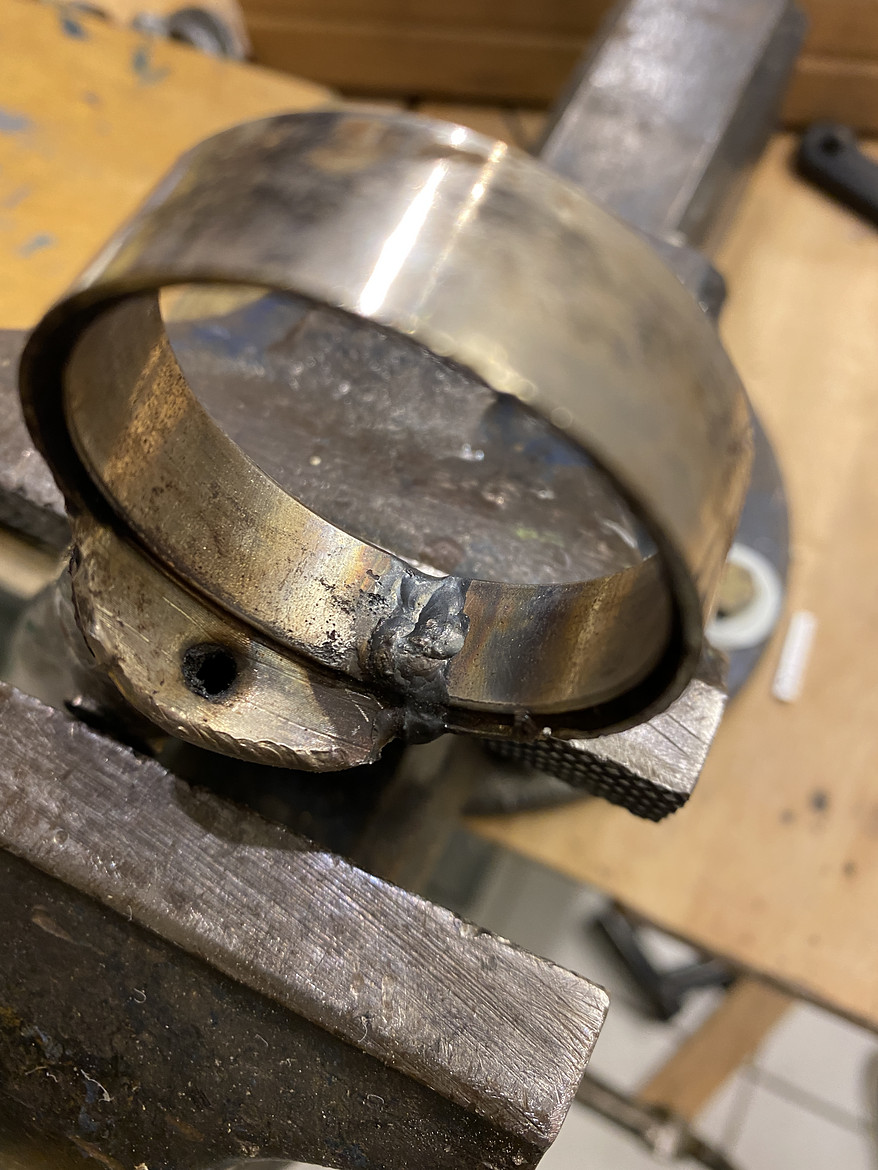 I really have no idea if these welds are any good. Comments, critiques and explanations would be very welcome.
You must log in or register to reply here.

A top-end Scott in disguise-or what?!