*maybe not a Raleigh Dynatech Odyssey

I was asked by a friend of a friend recently to source a couple of decent “old mountain bikes” for him. Mission accomplished reasonably quickly with an M-Trax already in the cave and a Bear Valley from eBay. An unfortunate side effect was reawakening some of my old eBay searches with the result being the garage (supposed to be emptying) now has a couple of extra residents. The first was a MF Courier - I’m embarrassed to post here as I’ve mullered it removing a seat post. The second is this Dynatech Odyssey, one of my all time favourites - yes Endeavour is in my searches but have never seen one of those outside of the two on this forum! Photos are as it arrived and will probably stay like for a while until I get through some other stuff - a bits and pieces build, rides really well straight out of the box and a credit to the previous owner.
I’m hoping to be educated - I’ve been trying to find this in a catalogue and can only find the version with painted tubes, this appears to be part polished/part painted main tubes with decals over which look really smart. It doesn’t have the gussets on the lugs like others I have seen - does this point to a later model?
Stem - while it’s nice should it have the painted type stem I see on most other Dynatech and does anyone have one?
I’m leaning towards a Suntour build just because I like it and I’ve got enough amassed to do so. This will be functional not perfect! 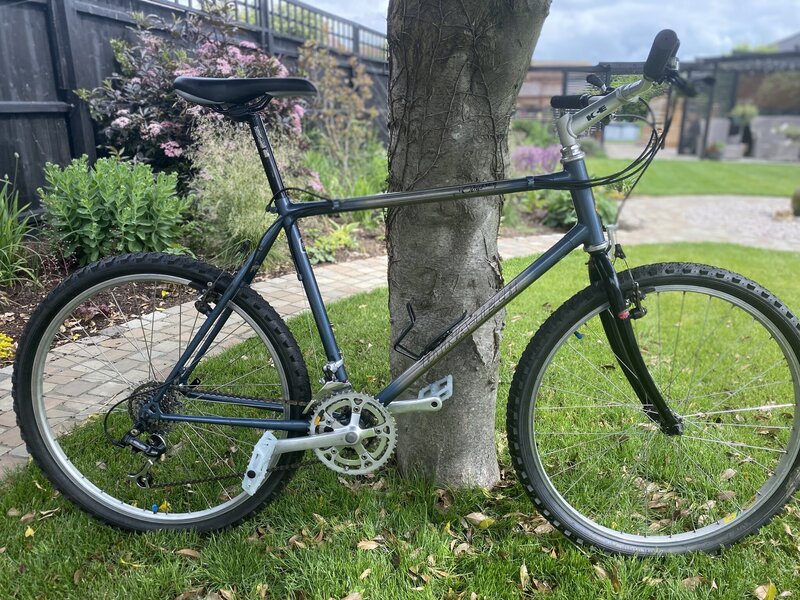 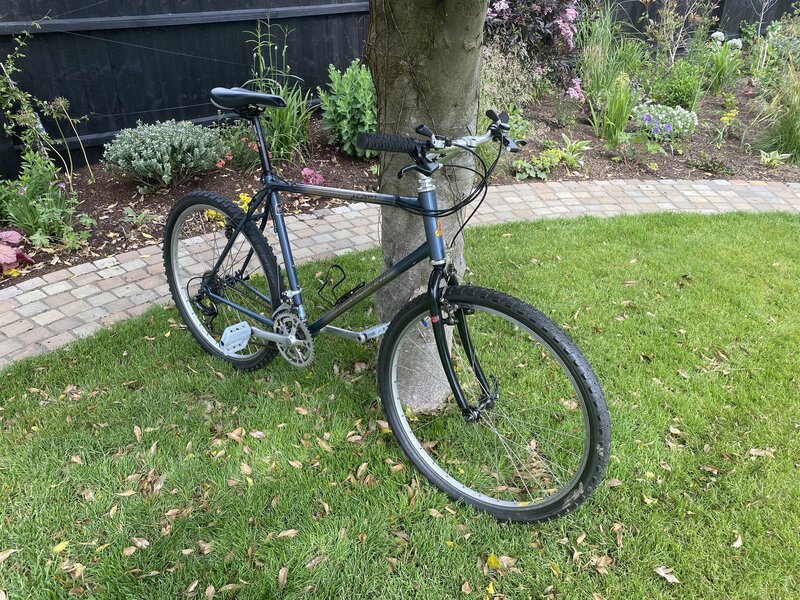 Looking at the lugs I see it's no dynatech, possibly an mtrax painted up as a later warranty replacement by Raleigh..... other than that it looks tidy but the brake levers are v brake so won't work efficiently with cantilevers and the fork is deffo replacement...original woulda been a straight blade fork.

retrobikeguy said:
Looking at the lugs I see it's no dynatech, possibly an mtrax painted up as a later warranty replacement by Raleigh..... other than that it looks tidy but the brake levers are v brake so won't work efficiently with cantilevers and the fork is deffo replacement...original woulda been a straight blade fork.

Oh! Makes it super rare then lol! Should have gone to Specsavers etc, got excited and carried away as it was cheap! Don’t think I’ll lose any sleep and I’m sure the seller wasn’t trying to pass it off knowingly.
The finish is really good in terms of the paint/fade to polished titanium and the decals. So what model might it be in the Mtrax range? It’s a good few kg lighter than the Mtrax it replaces which I guess it would be ti main tubes vs crmo.

So the forks should they be UGLI forks?

To be fair, the paint does look really good, an mtrax woulda had either a unicrown or an u.g.l.i..... and I am happy to be proved wrong on my diagnosis tho if folk wanna pipe up.

Gtpulse said:
The second is this Dynatech Odyssey, one of my all time favourites - yes Endeavour is in my searches but have never seen one of those outside of the two on this forum!
Click to expand...

guilty as charged!!
A 3rd Endeavour surfaced recently in Germany. Have a look at my Endeavour thread for more info, but it was strong money at €1500.
Don't know if it sold ... but not to me!
3 would be excessive!

Gtpulse said:
I’m hoping to be educated - I’ve been trying to find this in a catalogue and can only find the version with painted tubes.
Click to expand...

The only 91 Dynatech Catalogue in the Archive is a German edition one. It doesn't show the complete Dynatech line up and specs.
Still hoping to find one and scan it for the Archive.
The Odyssey was full M730/32/35 XT including seatpost. Reynolds 2070 tubes (equivalent to 653 tubing) Wishbone rear stays and straight blade Reynolds forks.
As RBG has mentioned, your Odyssey is definitely more likely to be an M trax painted up in the Odyssey colours. It's looks like it's been done to a fairly good standard, so I'd second the opinion it is a warranty replacement for a broken Odyssey.
Still not bad though.

Gtpulse said:
Stem - while it’s nice should it have the painted type stem I see on most other Dynatech and does anyone have one?
Click to expand...

Unfortunately I need mine as I'm going to colour match this for the 2nd Endeavour.
They do come up on eBay occasionally...as do the reynolds straight forks.

Here's a couple of pics of my Odyssey...for reference. 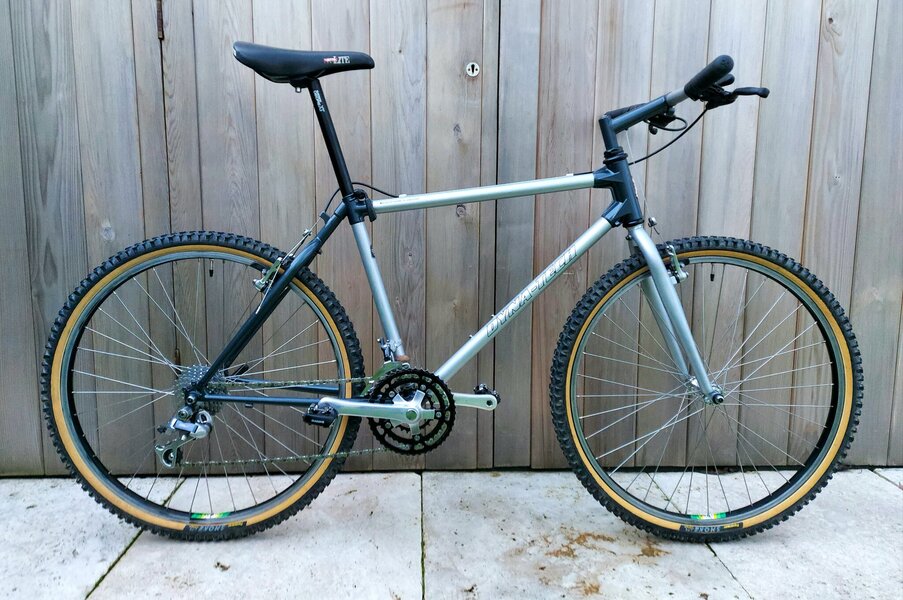 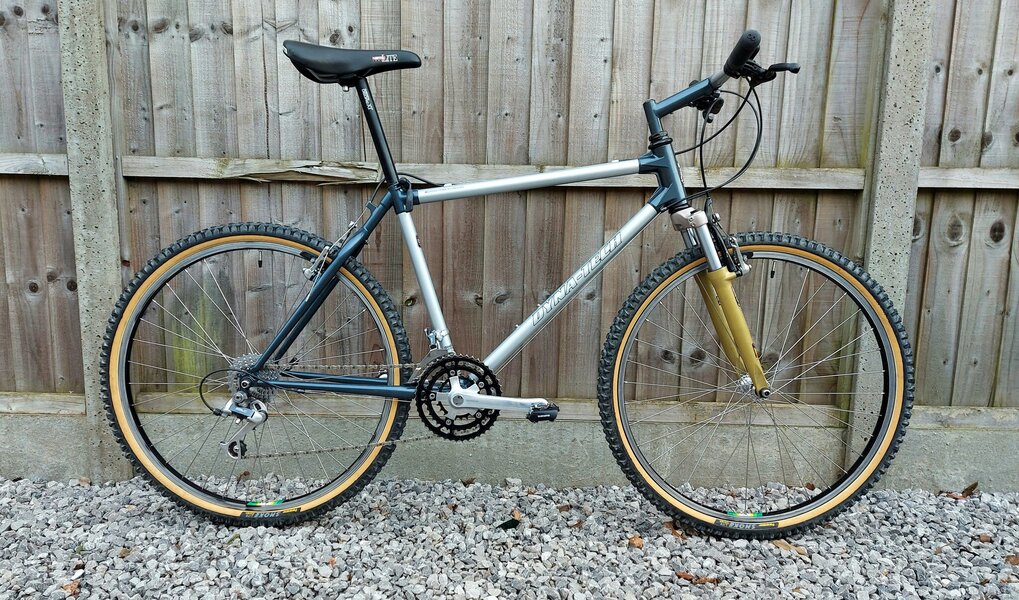 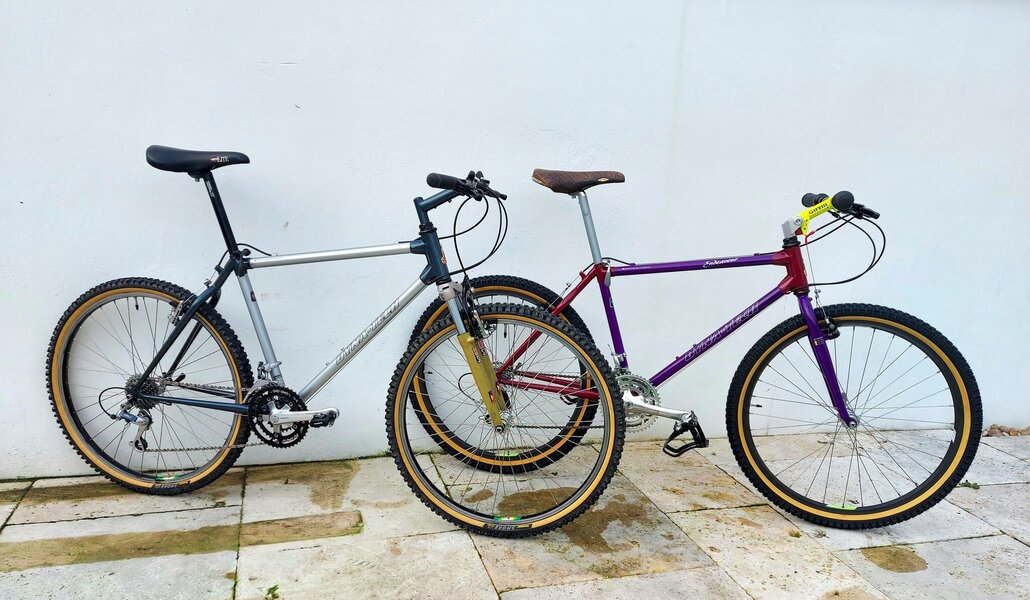 Thanks for the replies guys!

I think RBG’s suggestion it is a warranty replacement makes the most sense. I don’t think we’re talking Harry Butler/Magnum Bogus Hetchins type shenanigans here!
While it’s possible someone could reproduce some of the decals, it does have the holographic Dynatech tube decal with serial number on the seat tube which I guess would be a little harder to come by or reproduce unless direct from Raleigh. Frame number begins with E which from the little information I can find about RSP numbering conventions would indicate it’s probably a 1994 frame. Main tubes are non magnetic pretty sure they are titanium, head lug is also non magnetic. The other lugs are magnetic as is the rear triangle.
So someone had a bust Odyssey and Raleigh built/painted the nearest they could to a new one? Could you imagine a manufacturer doing that now and trying to emulate a previous model rather than just refund or sending a newer model. That’s pretty good service.
Still really pleased with it and will press on with a build at some point once it gets to the front of the queue.

Think I’ve pinned down what was the likely base for this “warranty replacement”. The elusive 1994 catalogue would help.
The 1994 Dynatech Diablo frame looks identical to me down to the cable stop integrated on the seat post clamping area and the fade paint (albeit in a different colour) on the main tubes.
A link to an old ad for a Diablo on this forum

Raleigh Dynatech Diablo AL frame/forks/stem/seatpost 19" in good condition for age. Threads are all good in hanger and BB. slight bits of patina but all there for a solid project. Inlcudes Bontrager seat post and XT front mech. SOLD SOLD SOLD SOLD SOLD

So I guess I need some U.G.L.I forks, with a quick scan of eBay and zero results I don’t suppose they are easy to find!

I agree it could be a ‘94 Diablo. Here is my Sentinel, originally from 91 (same year as your Odyssey was originally released). Unfortunately it debonded at the front lug (down tube) in 1994.

Raleigh had its 15 year frame warranty at the time and this is what I got. A newer titanium main frame (passed the magnet test), Frame number starts with E, cable routing looks identical just painted up as my 91 Sentinel (I also suspect they reused my original forks?).

Raleigh sent me a letter with the replacement frame explaining the upgrade to the newer to frame, but keeping my colours. 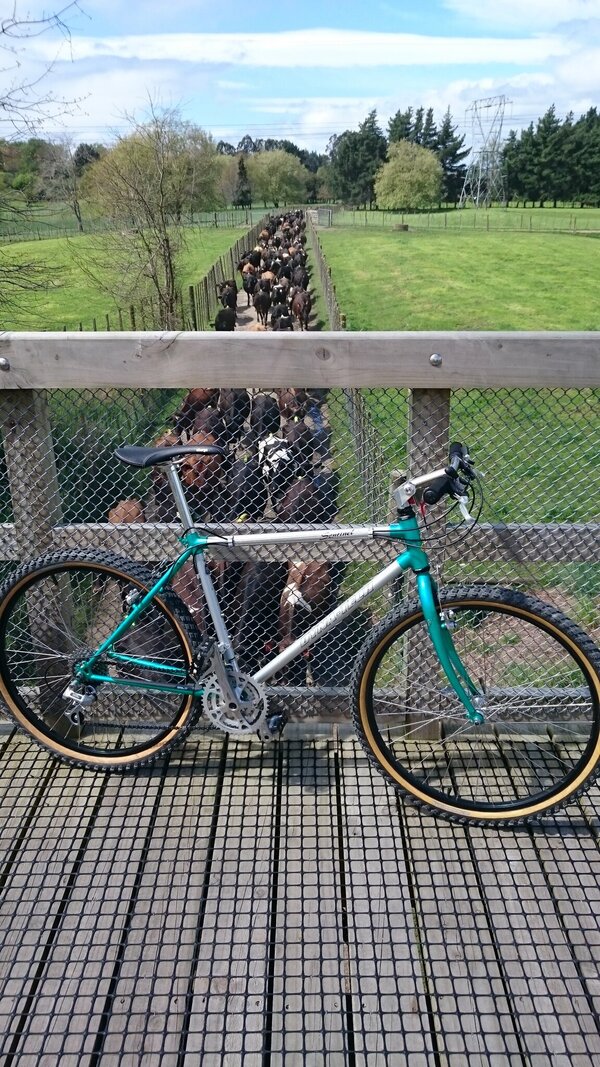 Nice bikes in this thread, and good detective work!
You must log in or register to reply here.