I picked up a bike last year, it was nice. So I set about taking it apart and making it mine....

It came loaded with nice grey XTR and modern ancillaries, so I picked the bits I wanted to keep, and reallocated those parts I wanted to swap out.

It arrived sporting some orange Bomber Z1 forks, looked nice but fancied something lighter. I had a set of black Z5 fly lights lying about so went for them. Trouble is I can't get the air right in them, so traded in these RST's. Not sure about the colour but they work well and are fairly weeny on the weight.

Well, I need to settle on the fork:
RST XMO, Vgc, light, work excellent, but blue? Steerer tube a teeny bit short too.

Orange Bomber Z1 BAM, vgc inside and out, and match decals well, but heavy

BLACK Bomber Z5 Fly Light Air, gc and match black parts nicely, but can't get air in them so not much use. And rather heavy which was disappointing given the name!

That's it I think!

So there we go a light but not daft build on a decent Ti frame.

Oh yeah, it says King Kahuna on the frame, but there is no further evidence of this, like the fancy tubes and gussets, or a K serial number, so I guess this was the previous owner either trying it on or using up the stickers!


RickTheUncivil":1ec2iemg said:
Oh yeah, it says King Kahuna on the frame, but there is no further evidence of this, like the fancy tubes and gussets, or a K serial number, so I guess this was the previous owner either trying it on or using up the stickers!
Click to expand...

The frame is certainly something other than a 1997 Hei Hei, as it has front and rear Mech stops on the Downtube, and a non-sloping Toptube.

If you are very lucky, it could possibly be a 1996 King Kahuna, although these are extremely rare. I have only seen a few examples, so identifying it as a 1996 K.K. is somewhat tricky without a serial number, but it is of note that these lacked the enhanced tubing of the later models. The example below shows the "B" prefix, and "-64" suffix indicating the 6Al-4V rear triangle of the 1996 King Kahuna. The "19" is the frame size and the other digits are the frame's serial number.

If there is no 64 suffix, then your frame is likely to be a 1995 Hei Hei as I believe this also had the non-sloping Toptube. 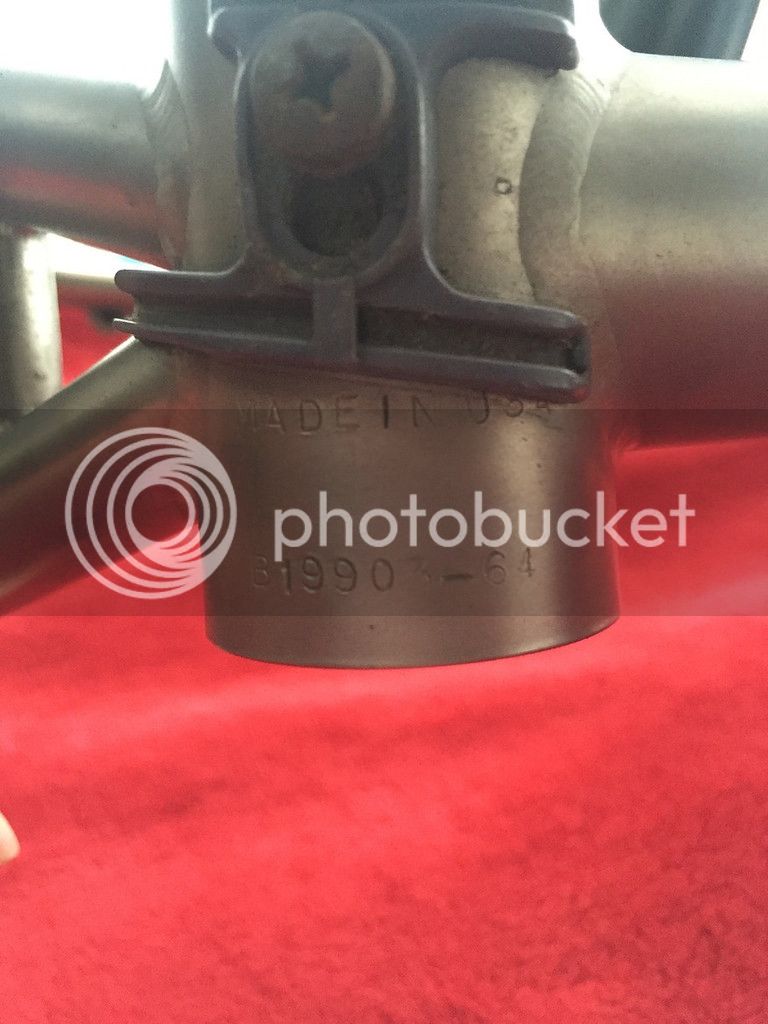 Cheers pip, I don't know the year for sure hence the ? in the title. it's a minefield of misinformation and treachery with so many varieties of the truth. For example the cable routing doesn't appear to be an absolute with some saying its definitely one way post 97 and others saying no it's whichever way post 96 etc, and the eternal issue of mid year changes not shown in catalogues to confuse matters, 96 frames with 97 decals sold in 98 do the original owner doesn't even know for sure. And this looks to have repro decals.

So yeah, from the serial and the observation of tubing, ie no gussets or funny ovalisation I'm not entirely sure of year but indicate it's not the kk. Although there are some who say otherwise :?

serial shown in below photo....

Those are defo re-pro decals: the black lines are too thick, the colours and edging are not quite right for the 97 schema. That serial number indicates a HH.


al-onestare":2ntrort1 said:
Those are defo re-pro decals: the black lines are too thick, the colours and edging are not quite right for the 97 schema. That serial number indicates a HH.
Click to expand...

yeah, decals dont look to be best quality anda are a bit scratched in places, which gives me options to change them without feeling bad about it. I'm thinking that if I like the ride of the RST forks then some blue in the decals might look nice and help bring it together.

I will have to spend some time looking for appropriate designs.

I managed a test run around Macc Forest this morning, very successful...
apart from some numpty not adjusting the front mech travel after tightening the crankset, meaning much difficulty shifing into the granny ring :facepalm:

Climbs well, size is good, running fairly narrow tyres so comproimised on the loose gravel but hey, it brought a to my face. And according to my strava app thing I was faster this morning on the Kona than I was last night on the same route on the B17, which is good to know.

think we have a ride for Mayhem now

just commented on this on the ebay watch thread.

The frame is designed to use a dog collar and canti's which dates it early '96 or before, after that they had a cable stop on the rear of the top tube to run v brakes. The non sloping top tube was also used on '95 Hei Hei's so a good bet would be a '95 Hei Hei

SO, time to start looking for a replacement...
... and look what the postman has brought me.

Time to get started again