help to identify a blue Saracen with segmented fork

Hi,
i need a bit of help from the Saracen experts here.

I've bought a while a go a blue second-hand Saracen bike.
It was cheap and equipped with low end parts. Also the parts had been pretty mixed and had been according Shimano year codes from various years, up to 1990, but mostly 1992 or 93. 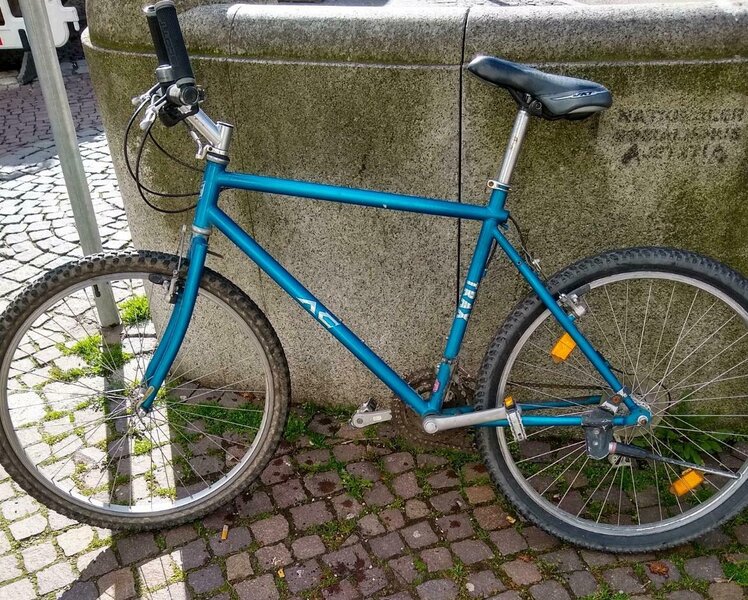 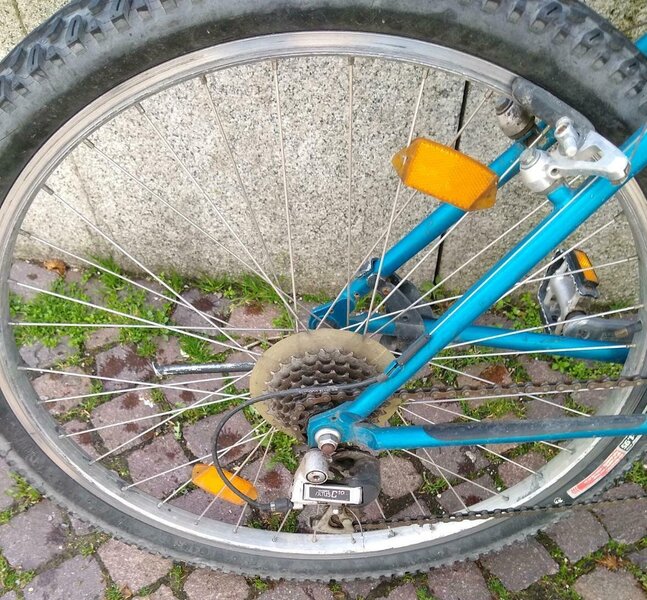 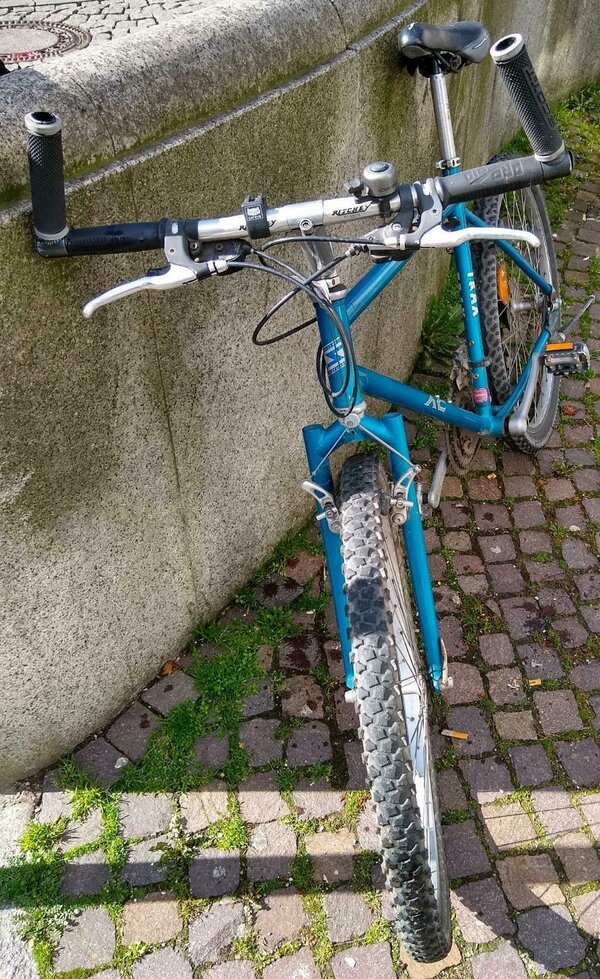 Decals had been mostly not existing any longer, just "AC" and "TRAX" pieces had been left.
The bike has a nice Tioga headset and Ritchey handle bar.
It has a nice segmented fork, a bit like a Tange Struts but with Saracen "S" logo/embossing on top.
Seat post size is 26.4 mm.

I've meanwhile build the bike from new and used a DX group mostly (so don't look at parts used right now to identify the original bike).
This is how it looks right now: 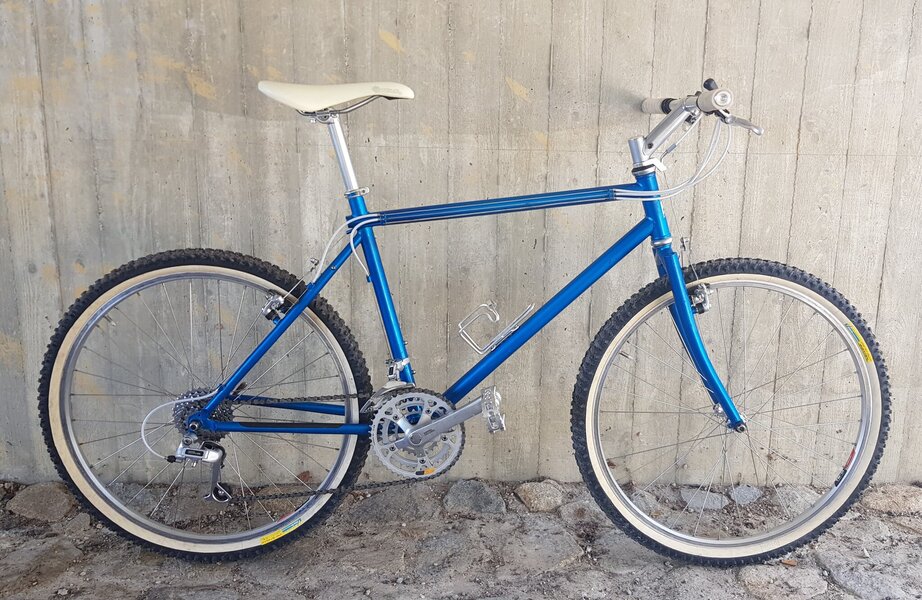 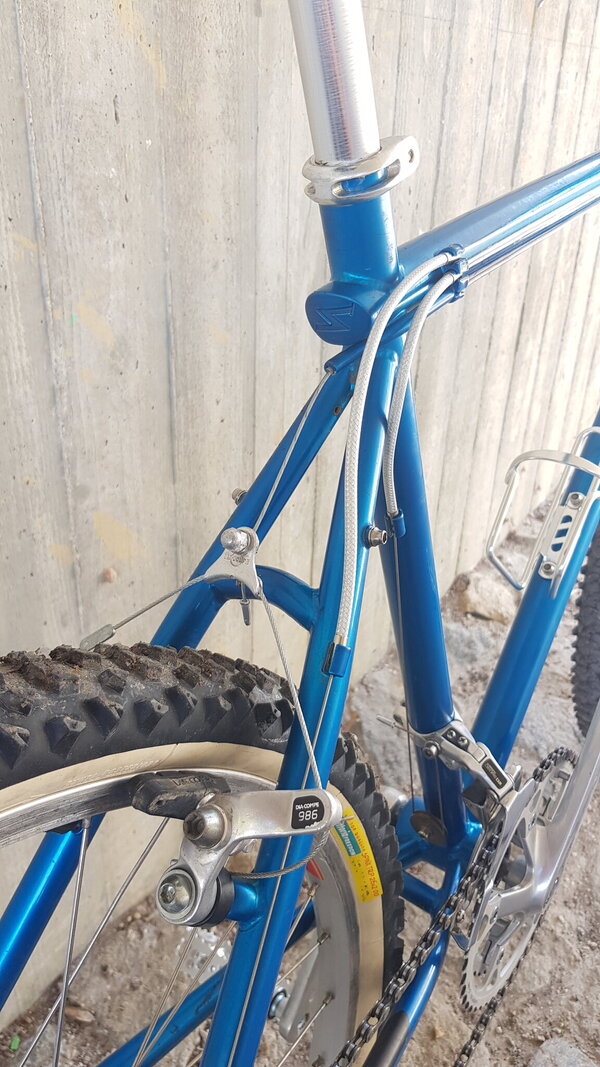 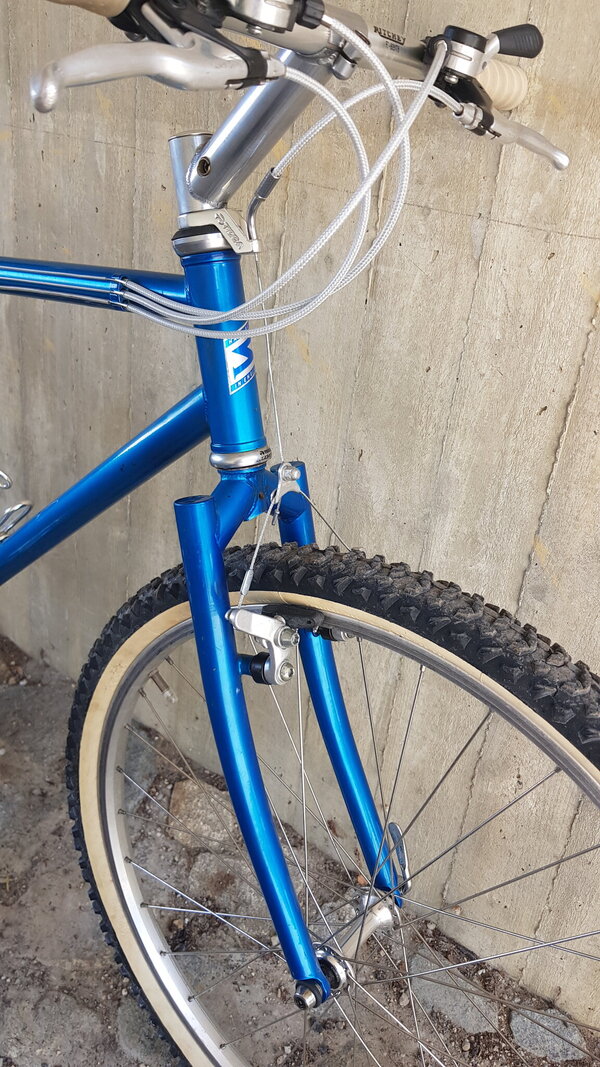 It's still same paint job, it's really hard to catch the color by a picture.
To me it's clearly more light and more turquoise as on my pictures of the refurbished bike, and it's really shining in sun light conditions. On the other side, it's not as turquoise as on the picture of the seller (above).

I was investigating to find the model and year of that Saracen already a lot.

So far potential candidates:
- 1993 Kili Flyer, the variant with rigid fork, but parts replaced by low end stuff? Sure, also the rest of the "trax" decals isn't matching. 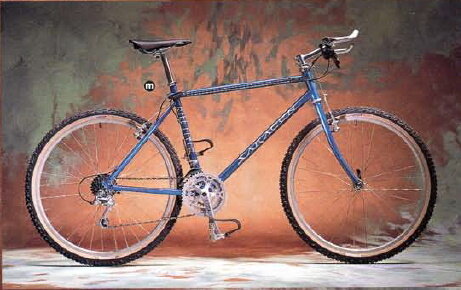 - 1994 Tufftrax, but color seems to me clearly more dark, and parts are also not matching 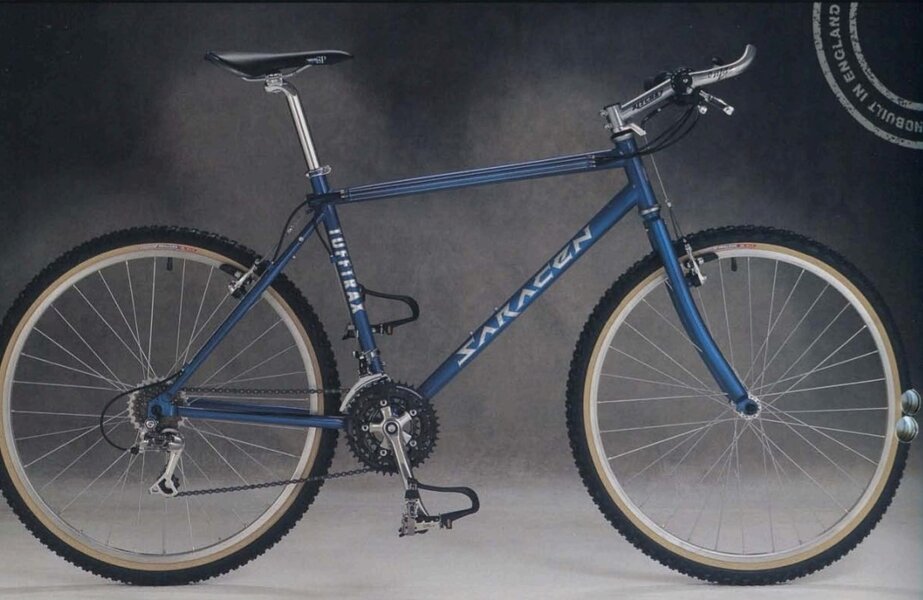 - later models in blue like 1995 Forcetrax or Maxtrax (no clue what year the turquoise-blue one is), but those have no segmented fork any longer

I have heard the font or outline used for the decals could help identifying the year:
Don't have a better picture, but maybe that's useful. 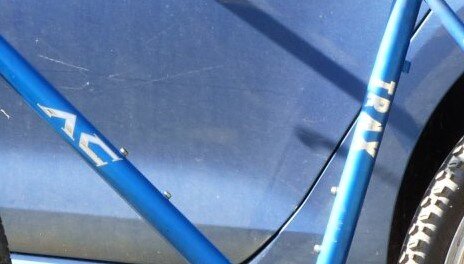 Maybe also helpful to know, I've bought the bike here in Germany.
There was no official distributor to Germany before 1994 and old Saracen bikes are anyhow pretty rare in Germany.
Perhaps its 1994 or younger, or was imported?

Is there a method to use the serial number to identify year and model?

What do you think? Can you please help in identifying model and year. Thanks in advance!
Last edited: Sep 3, 2021

@drystonepaul You seem to be able to identify the year by the font type of the decals. Can you please have a look at mine?
Last edited: Sep 3, 2021
G

I reckon it's probably a tufftrax. Obviously, pre-v brake and clearly a bit of a parts bin special in terms of the previous owner.

The Trax tells you it's not a flyer, so no prestige frame.
Serial number ?

I'd go the 1994.
ignore the darkness of pictures in catalogues, photos, scanning, an lighting all change it.

I had a 1994/95ish Terratrax from new. (Same frame design) the top tube seat stay extension like on GTs stopped the following year.

the paint jobs were supper strong with thick clear top coats and zero fade for the near decade I had mine.

id guess a tufftrax model and the frame colour would prob confirm the year as they changed all of then annually.

Thanks all for your feedback!


FluffyChicken said:
The Trax tells you it's not a flyer, so no prestige frame.
Click to expand...

ah, yes, missed that,
mine is not Prestige, another reason that its not a Kili Flyer 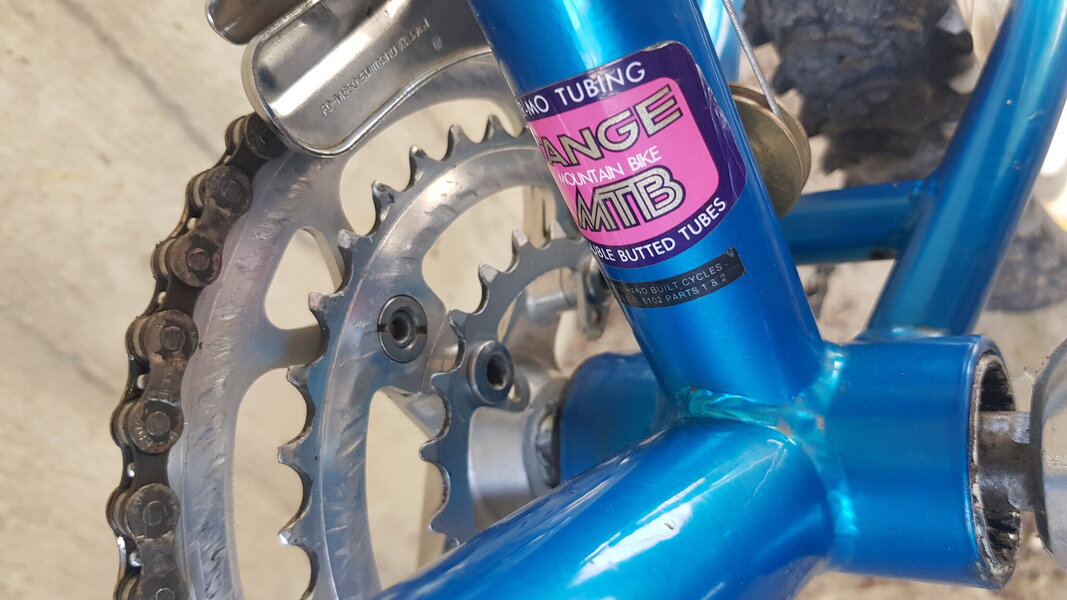 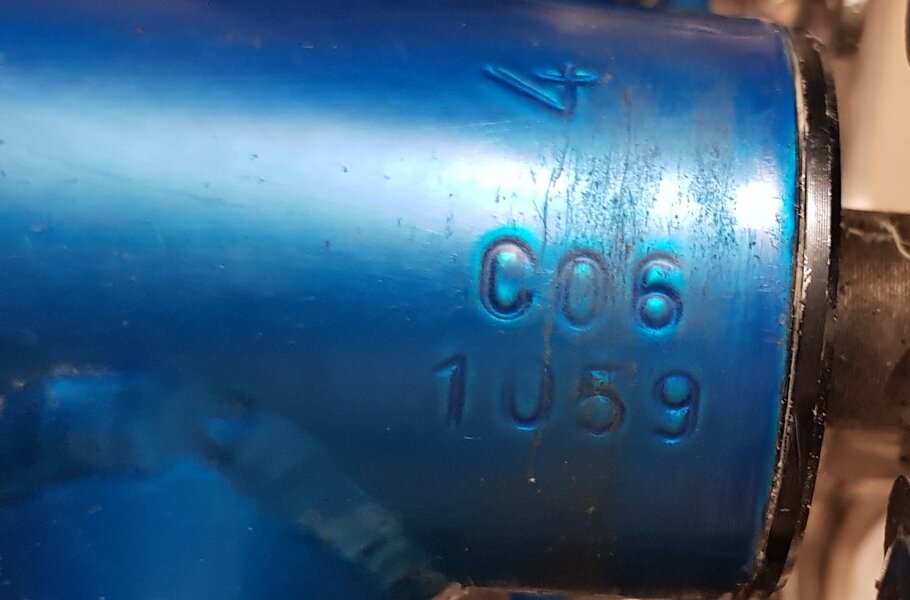 FluffyChicken said:
I'd go the 1994.
ignore the darkness of pictures in catalogues, photos, scanning, an lighting all change it.
Click to expand...

maybe also the Tufftrax in the 1994 catalog appears much more dark and strong blue as in reality.
As i had also issues in catching this fancy color right by using a digital cam.


Joe*Pro said:
id guess a tufftrax model and the frame colour would prob confirm the year as they changed all of then annually.
Click to expand...


greencat said:
clearly a bit of a parts bin special in terms of the previous owner.
Click to expand...

indeed, but the crappy Altus and whatever parts went now anyhow to the rubbish can

Just the Deore DX components used from me now and also the Diacompe 986 brakes are not perfectly matching any longer for a 1994 model, but had been discontinued the year before if I'm not mistaken.
I think i can live with that

Hi, all. I am thinking of selling my 1994 Saracen Eiger & 1995 Saracen Tufftrax and wanted to gauge what interest there might be if I were to do that. To put the money towards a new Saracen I am hoping to get £175 for the Tufftrax and £75 for the Eiger. I believe they are both 21" frames...

hi,
- 1995 Tufftrax has no segmented fork any longer (and looks still more dark blue, a bit unbelievable that this should be same color, but i could be wrong)
- the blue Backtrax, like those ones,

Hi I'm new on here. I have been looking for a decent frame to rebuild my old mountain bike onto using as many parts as possible. (Oh yeah?) I bought this 1996 (I believe) Saracen Backtrax frame off ebay and in doing some reseach on it, I find the previous owner is a member on here (Hi Ian) The...

www.retrobike.co.uk
have not GT-style triple triangle any longer and no segmented fork
- same for a blue Maxtrax i found (BTW: this picture fits best how my bike appears in reality) 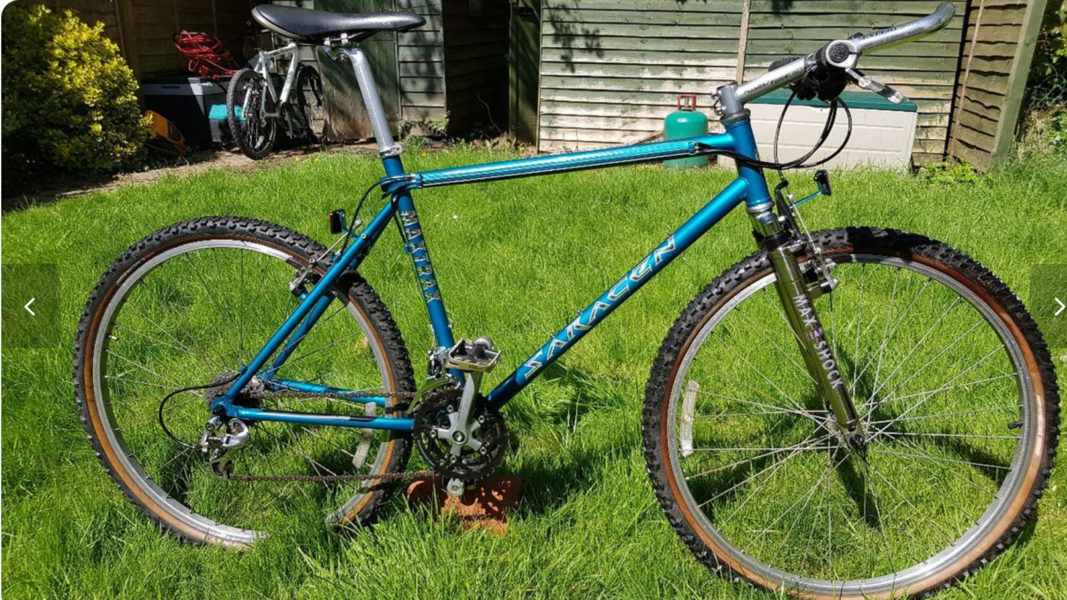 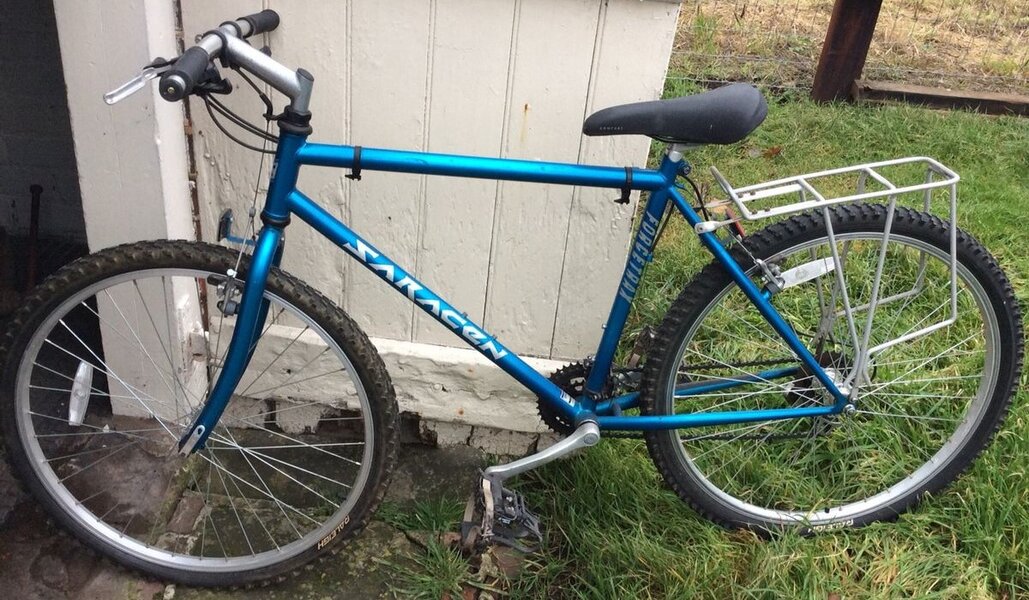 that means it's has to be a 1994 Tufftrax,
the only one with segmented fork, no prestige tubeset, with ahead set, and GT-style triple triangle, "trax" in the name and in blue,
just color in brochure is missleading dark
THANKS
(or keeps unclear, untill someone knows it better)

BTW: I'm already done in refurbishing it, and I'm pretty fine with it. How do you like it?
You must log in or register to reply here.