Bontrager Fan
Been meaning to do a build thread (several, actually, but this will be the first) on this fantastic forum, so here goes...

I grew up in the Santa Cruz Mountains of CA, home of many great frame builders, including the legend, Keith, himself. Of course, as a kid, I could never afford a Bontrager, so never got to experience why everyone made such a big deal about them until, as a young adult, my brother came across a Race Lite frame. So here's how this came to be...

My brother was given the frame by the guys that worked out of the cannery shop with Keith, with whom he was friends. The frameset was welded up just around the time that Trek bought Bontrager, and the shop guys were running around squirreling up the tubing and lugs and welding some of them up and giving them to friends before Trek took over. My brother was now the proud owner of a Race Lite frame, one of the last to come out of the cannery shop (perhaps illegitimately!). It's an interesting mix: mitered head tube, but single piece seat stays, top pull front derailleur with no cable roller. He was also given a Bontrager Composite rigid fork (!!), one of the ones that has the "smokey chrome" finished legs but was interestingly outfitted with a steel 1 1/8" steerer tube (aftermarket swap?). This was around the mid to late 90s.

My brother held on to the frame and fork for several years, never building it. Being the overly generous and benevolent brother that he is, in the early 2000s he gave me both! At this point, I was in grad school and getting very strong riding a friend's rigid single speed in the mountains of North Carolina. So soon as I received it I built it up as a single-speed with a Surly Singleator tensioner. My friend, who owned the aforementioned single speed, was quite close to a Columbian frame builder named Duarte (the same make of the single speed I was borrowing from him). He shipped my Bonty fork to Columbia and had Duarte machine an internally-butted aluminum 1" steerer, which made this fork even more fantastic. At this time, I was both mechanically and nostalgically challenged, so although I could build up the bike, I couldn't for the life of me figure out how to properly install v-brakes on the Bonty fork...they just weren't lining up correctly with the rims. Given that v-brakes were still the latest and greatest in the late 90s and early 2000s, I wasn't about to backstep into cantilevers, and couldn't afford more parts. So, I foolishly sold the Bonty fork. I got a good price, but I obviously am still kicking myself.

I built up the bike with a Mag 21 SL Ti, which I painted white to match the frame (see below). (The Mag suffered from the same cancer of the lower legs, and I tried using Mag wheel tinted clear coat, but it came out too orange...) 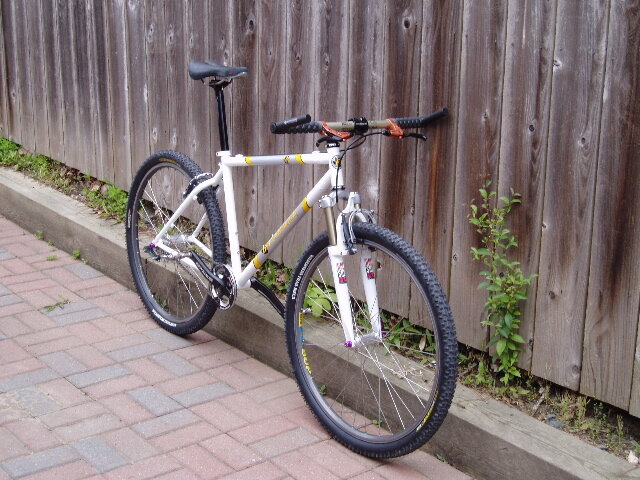 You can see the misplaced purple ano parts (I used what I had at the time). Today, even the Mag 21's are gone and the frame is totally dismantled, and has been for at least 12 years (adulthood and kids led to this, in part...). But now, I'm ready to rebuild, with some new inspiration. I've always drooled over the orange Paul Willerton Race Lite: 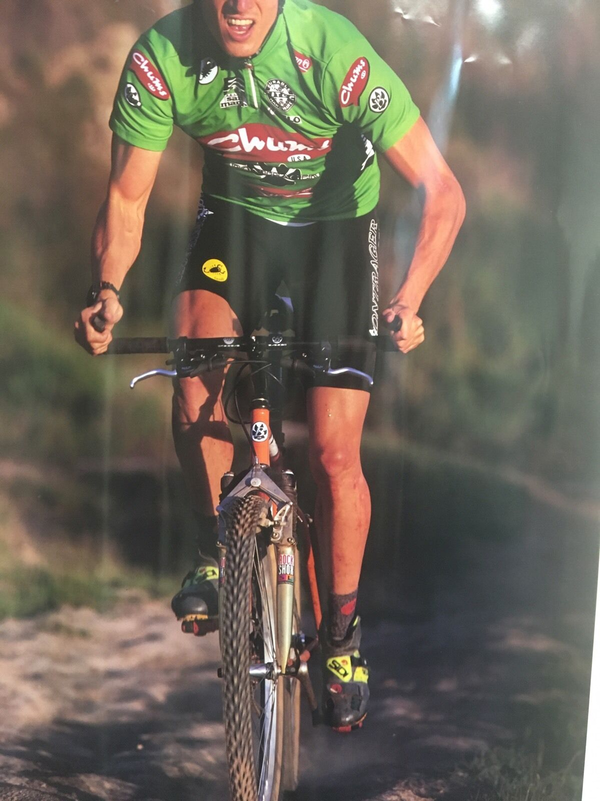 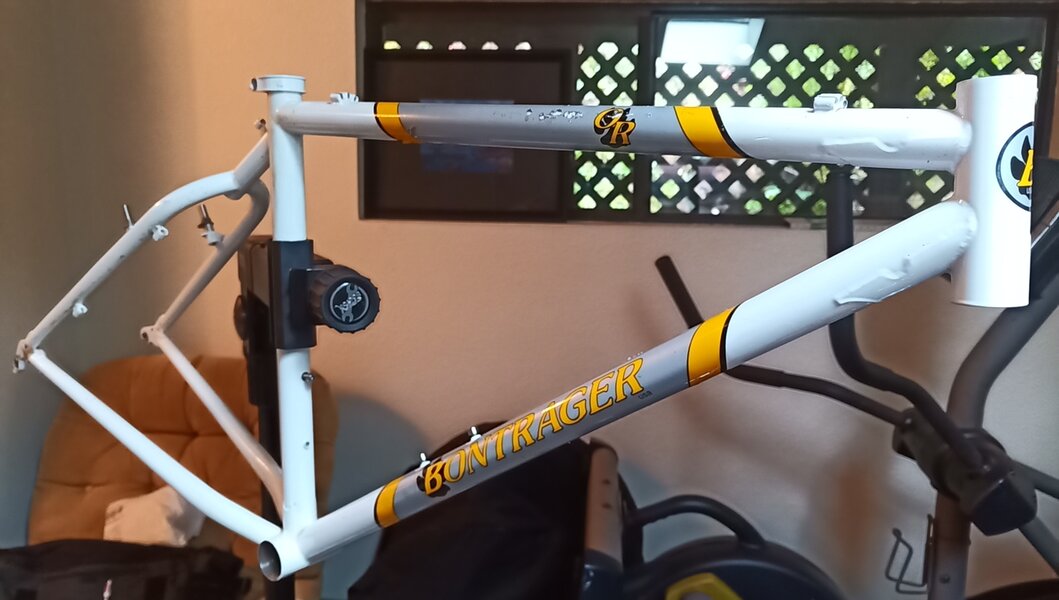 Hard to tell from the photo, but the paint and decals are tired, and I never liked the white.

So here are my goals:
1. Repaint in Bontrager Orange (anyone know what the RAL color code is?). Apply the black/white/silver decal panels that came with the orange.
2. My goal is NOT to do a catalog build. I'll have lots of Bonty brand parts, no purple ano or glitz (not appropriate for a Bonty). It's not important to me to duplicate the catalog, and in fact I'm wrestling with XT 735 groupo versus an XTR M950 groupset, of which I have parts for both. I'm leaning towards M950...I want to reserve my 735 gear for another build, and the 950 dark grey will look good with the orange.
3. I'm not intending a perfectly period correct build. It will have a mix of parts from the 90s and very early 2000s...nothing modern, but not all gear from a 1-2 year production window, so to speak.
4. Hopefully to whet your appetite, I have a lot of somewhat unique Bontrager parts to slap on this, that I feel will make it special.
5. It will no longer be a single speed....I intend to ride this, and I'm not in single speed shape any longer!
6. It will have a fully restored Mag 21 SL Ti, a fork I have recently acquired, but which will require me to figure out how to refinish the legs in high gloss gold, like the original. No more painted lowers....


I will have the frame back from the powder coater in about 1-2 weeks. I've found an orange, but have no idea if it is the same RAL code as was originally used. If you know it, let me know ASAP so I can have it painted corectly! Otherwise, it will be close, but perhaps not 100% faithful to the original color.

The other alternative is that I get the clear coat using powder, and apply the decals over the powdered clear coat. But the decals edges won't be protected by clear coat. Any opinions?

Bontrager Fan
The decals were big panels on purpose to provide some protection for the powder coat and were meant to be easily replaceable when scuffed and scratched, so weren't clearcoated originally from the factory. I'd get it clearcoated if you want, then put the decals on top.
E

benjabbi said:
The decals were big panels on purpose to provide some protection for the powder coat and were meant to be easily replaceable when scuffed and scratched, so weren't clearcoated originally from the factory. I'd get it clearcoated if you want, then put the decals on top.
Click to expand...

Thank you @benjabbi. Good advice. How did you come across the info that the decal panels were originally designed to protect the paint rather than as an aesthetic preference of Bontrager? I 100% believe you, I'm just fascinated that you know this!

To save benjabbi's fingertips (!), I read it here - page 2, the white panel on the right-hand-side - you should check all the Bonty catalogues out for interest https://www.retrobike.co.uk/gallery2/d/2929-2/Binder2.pdf

Bontrager Fan
Thanks @TreaderSteve, I was just going to say exactly that! 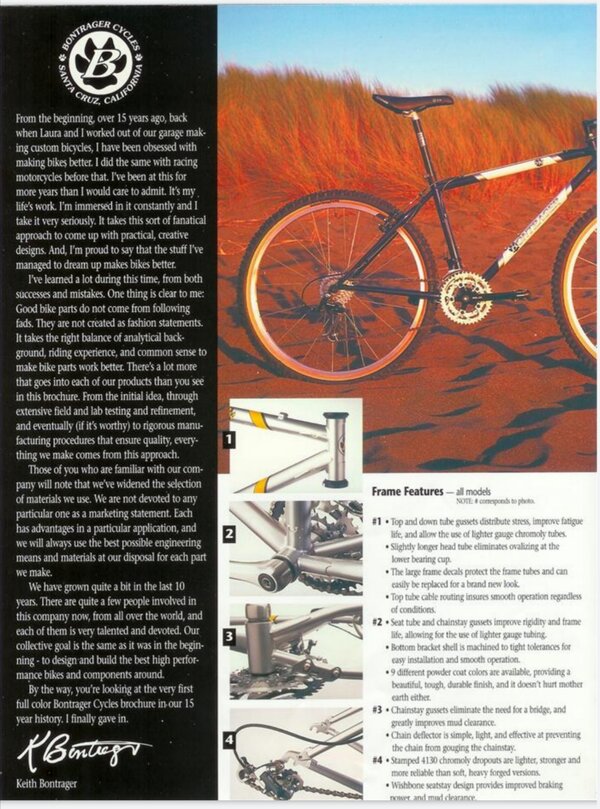 @Elfman, It's definitely worth reading all the catalogues, the reasoning behind all the little design details is explained nicely.
E

Bontrager Fan
It's been 20 years or more since I looked at any of those in detail, but you're right, I should look at them again!

I think RAL 2003 2004 or Pantone 1655C is as pretty good match. Its close to what Cotic in the UK used for their Orange Soul frames (which were inspired by Bontrager frames).

That's a 94/95/96 model so M950 would suit it perfectly. Oh, and the seat clamp really shouldn't be painted in the frame colour - they were black originally, although some privateers came with chromed ones.

Bontrager Fan
Thank you @slackboy . I already instructed the powder coat shop to use "Just Orange", which upon inspection looks very close to RAL 2004; it might be a tad darker, but I color matched it to an orange Bontrager water bottle cage. I've decided to do a powder clear coat, then apply the decals myself, as recommended by @benjabbi. My frame came with the seatpost collar painted white, and I do like it color matched to the frame even though it sounds like they mostly came black or chrome. (I'll stick with my frame's odd provenance and color match it orange.

Hope to get the frame back in about a week or so. Can't wait...
E

Bontrager Fan
Somebody in this forum said you could cut an inner tube to make the rubber gasket below the seat collar, right?
You must log in or register to reply here.