Great score a few weeks ago, popped up on FB marketplace SUPER cheap and jumped on it! First buyer backed out luckily so I was able to scoop it up just a few hours after it was posted.

Its a '97 Stumpjumper M2 Pro, 16" ish frame, its in pretty good shape but not dents, just normal scratches, normal chain slap damage too, but overall nice. Super light frame too! But what I saw in the single photo was not the frame, it was the cranks, Kookas too be exact! This is the photo from an ad: 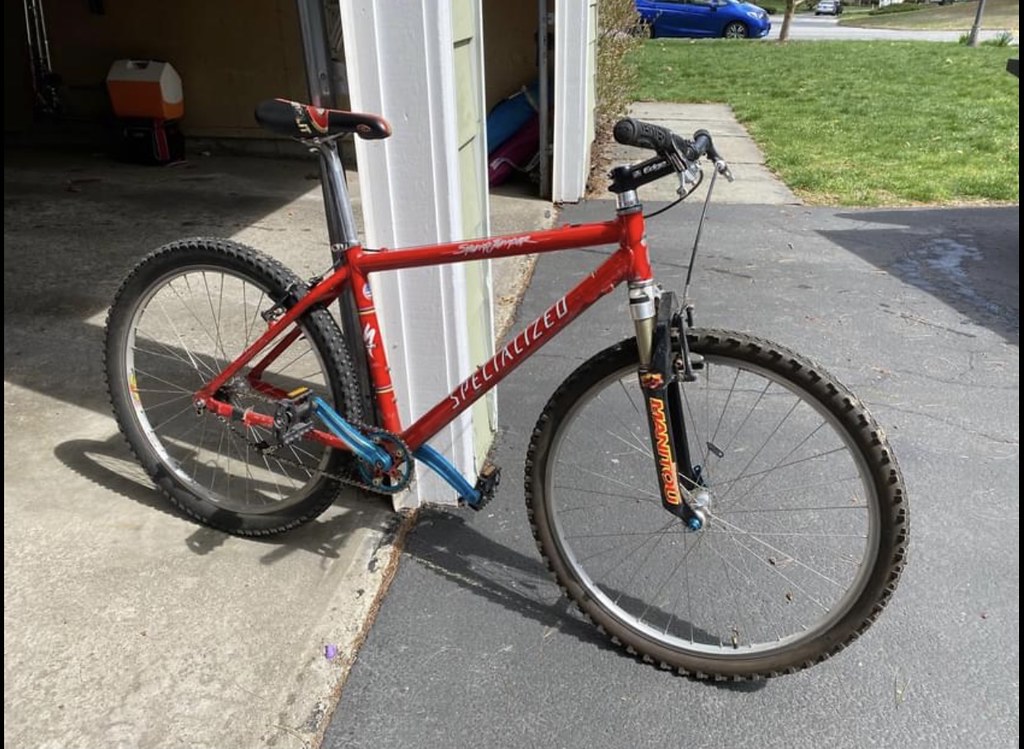 Can see it was converted to single speed, so it was missing the original big and small Kooka chain rings, but still the cranks were there!
So went to pick it up and it had those great cranks on it it good shape for being used for so long, a set of Nukeproof Super Fly hubs laced to some Mavic 517 rims, a Kore chain tensioner, an Answer Manitou Pro fork, and the rest of the components were pretty basic, but what an awesome find! 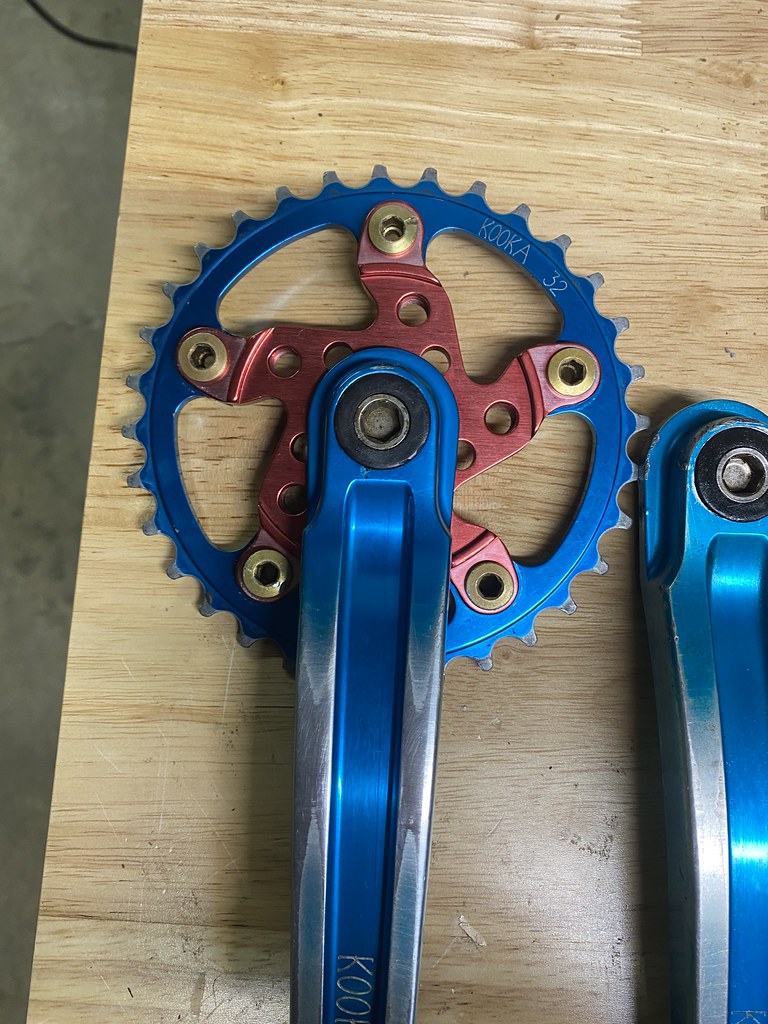 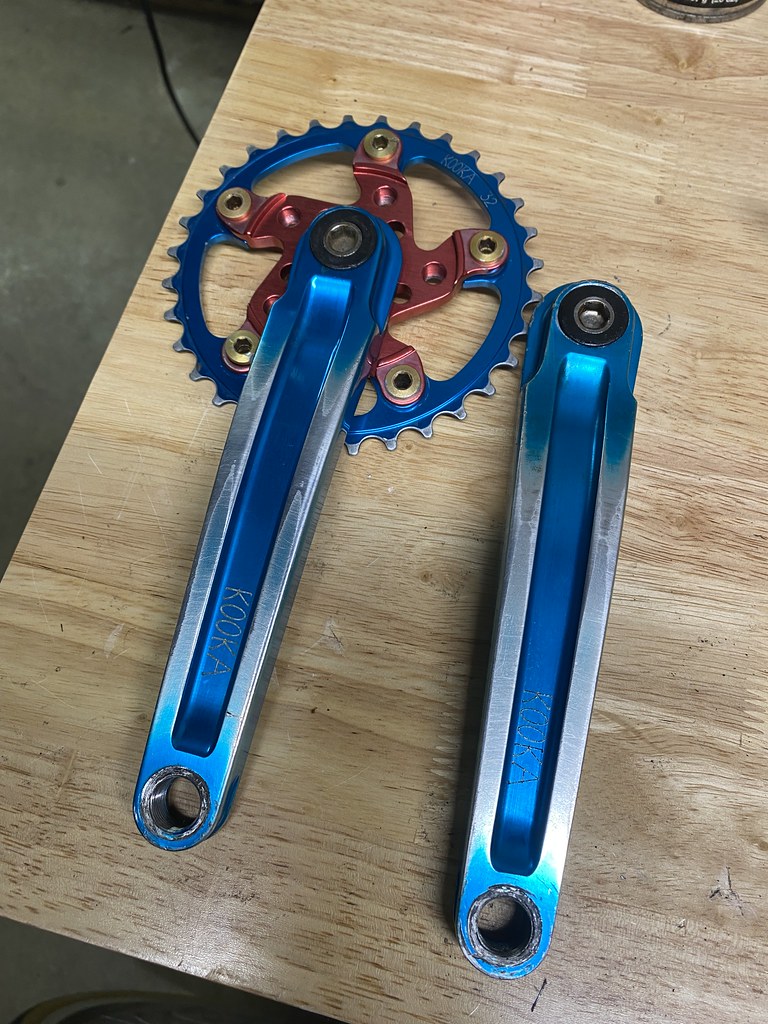 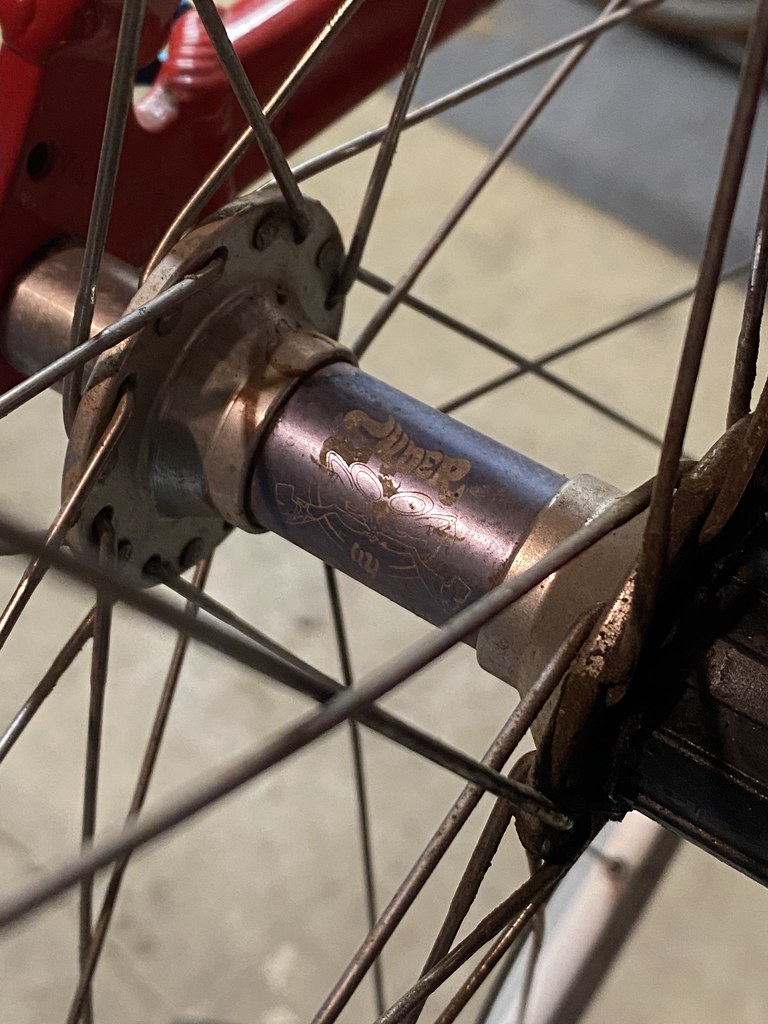 Decided to do a little parts bin build with it! Took it all apart to clean everything and so some maintenance (non-driveside crank arm didnt wanna come off). When I got it the fork wouldnt move one bit, totally frozen, so tore it all apart to see what was going on and it was just a mess. Decided for the time being to just make some spacers for the fork to make it rigid and just use it as a cruiser for now, would like to replace the elastomers at some point to give it some squish again. Added on a 9 speed Sram XO shifter and derailleur to make it more rideable making it a nice and simple 1x9 drivetrain . From there just some other random parts Ive have around to make it complete! Only thing purchased was a chain, a Selle Turbo saddle, and some Kenda Smallblock 8s. Still waiting on tires but almost done! 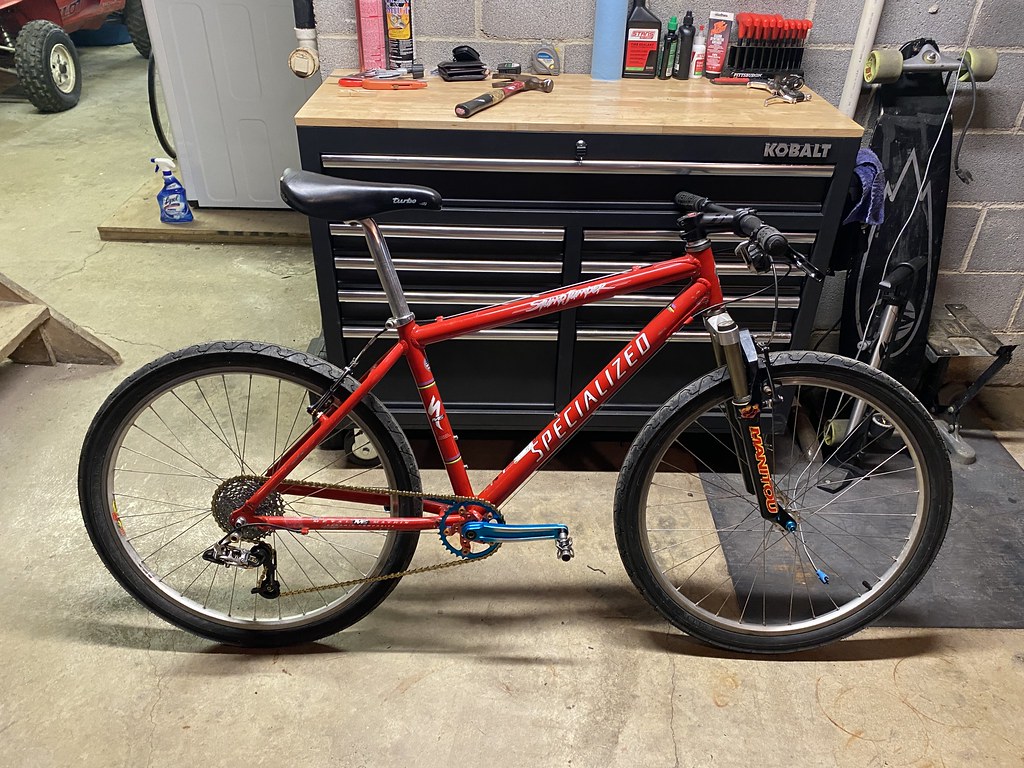 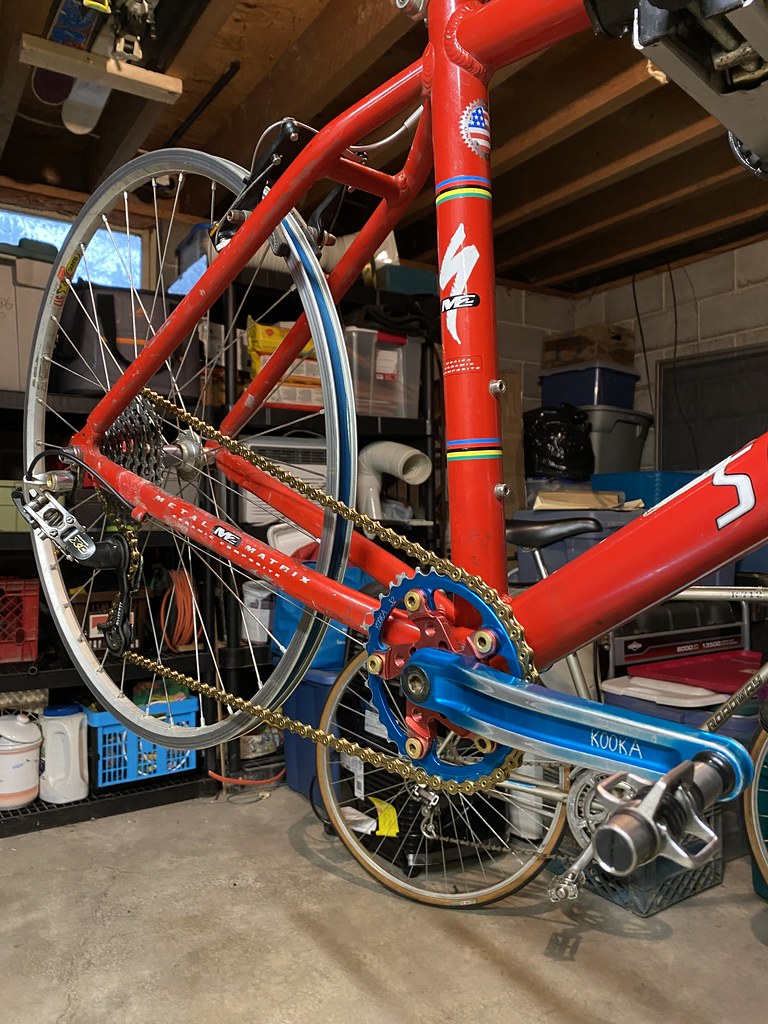 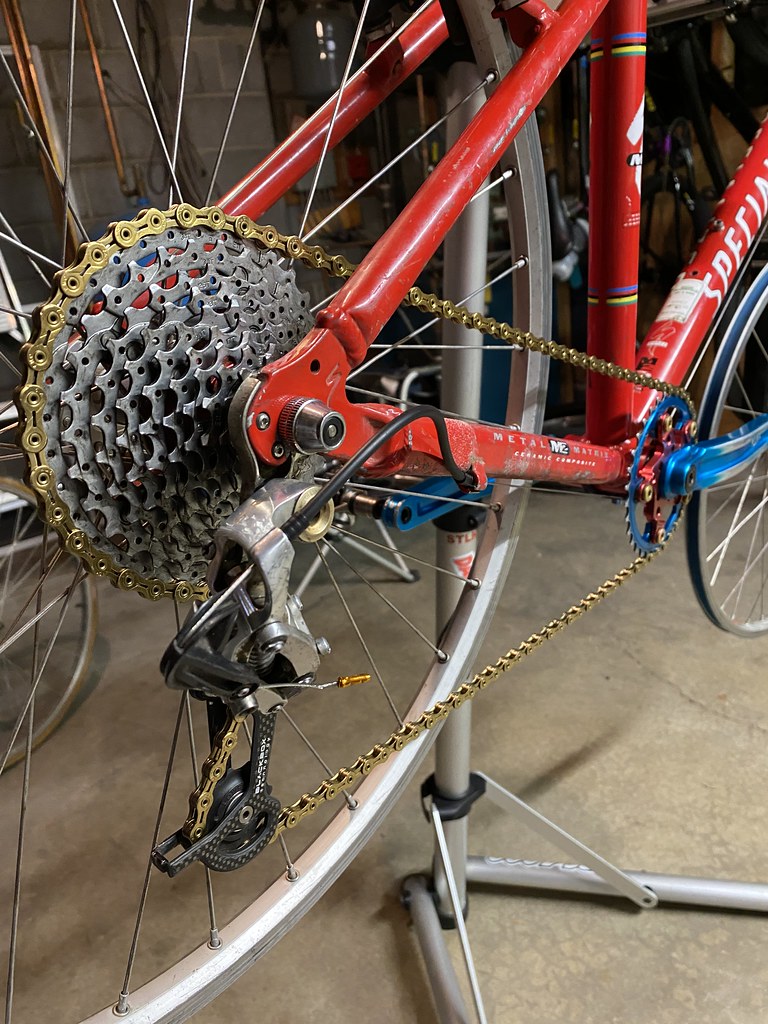 You did alright there with that. Nice looking cranks, hubs and forks ok to. The choice of mech kind of clashes with the saddle though. Vintage vs modern. But it's your bike and in looks department it's all good

Yeah the seat definitely is a bit dated, got as a temp (to eventually put on my ‘86 panasonic), until I can find a Ti Flite THATS more fitting for the age!

Such an iconic frame to. I've been wanting the green version of this for a while now.
G

Very iconic, super have to have found this thing for so cheap! Fits right in next to my Yo Eddy of the same year!
G

Got the old girl up and running nicely this weekend! Threw some Kenda Small Block 8s on it and some fresh brake pads and she was ready to go, super stoked on this little mash up of parts! Went for a nice ride around the farm and found plenty of mud and water, made it back with some soaked feet and a smile on my face. Such a light bike and a nimble one, really is such a fantastic ride, even with the front fork currently rigid! 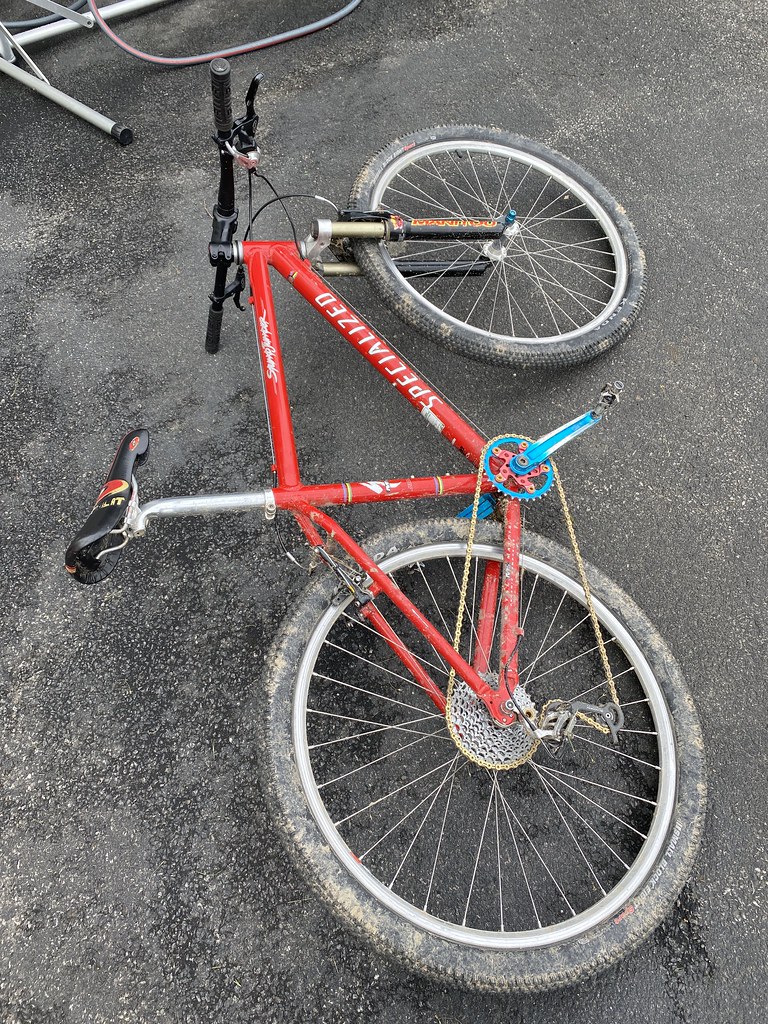 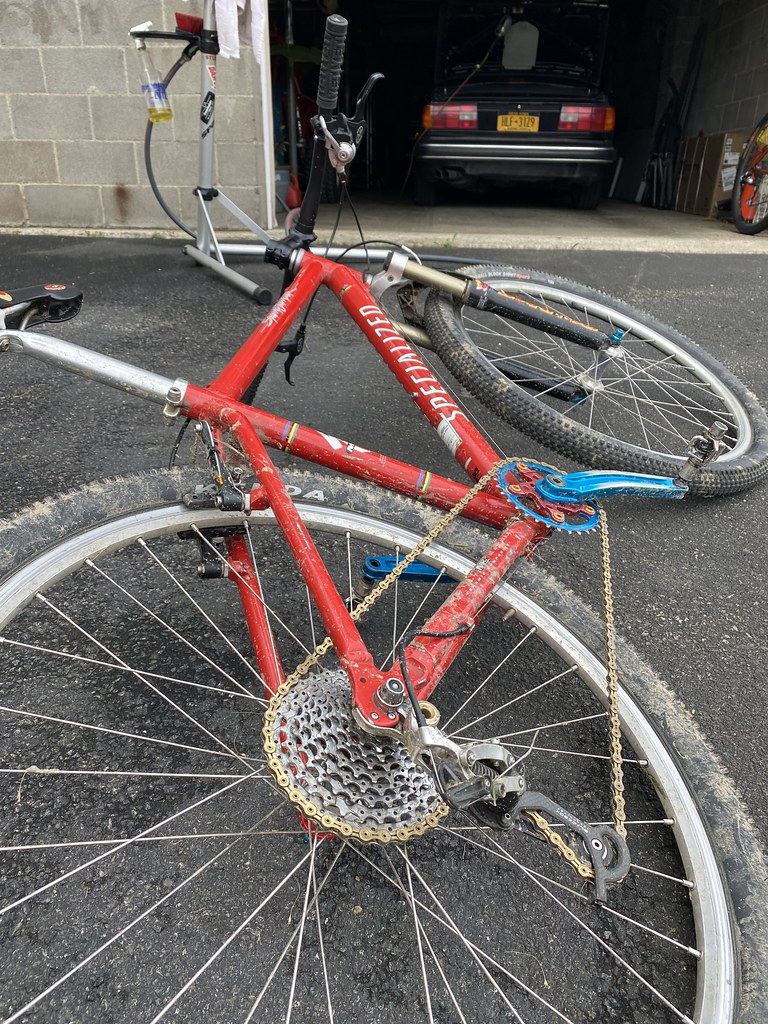 I love these kinds of builds that actually come together in a fully functional way. There's an aesthetic to the mish mash parts selection when you know it all works well. Thanks for posting the build!
G

Functional and beautiful all in one!
You must log in or register to reply here.