'Twas the night before Christmas, when all through the house not a creature was stirring, not even a mouse. :xmas-wink:

Right, enough of that…on with the story, which started way back on the 7th of August, me and the lad were taking a break at the top of the blue run at Dalby forest and we were just chatting about bikes and stuff…

I’d asked him what modern bike he might want once he’d finished growing, he replied that he wasn’t really that bothered, he’d rather have a Pace RC200, maybe an F8 with disc brakes that he could retromod with maybe a 1x11 group…he also thought it might be cool to have a “Mint” themed one.
Green or Blue? I asked... “hmmm not sure” was his reply, “I do like the plain silver/aluminium ones, they kind of remind me of the RC100’s… hey, you could polish one up Dad & I could cover it in Mint stickers…it would look the nuts!” :roll:

15 minutes later and I’m on my arse having gone over the bars rather heavily and broke/cracked two ribs… :shock: thankfully my 13yr old has (when it’s needed) a sensible head on his shoulders, so after shoving my Antaeus off of the single track and checking that I’m not dying, he positioned himself a few yards up the trail to keep an eye out for other riders whilst I got my wind back, then helped me back down to the trail centre car park and loaded the bikes.. and got the ice creams at Baldersons Ice Cream Parlour (Thorton-le-Dale, just across the way from Pace HQ).. top lad..
A few hours later and I’m waiting to be X-rayed at Scarbados A&E and I got to thinking what it might take to make this dream come true… a quick look on eBay found a bit of a scrappy large framed RC200 going cheap, cracks and shot BB threads and some ambiguity over exactly which one it was, was keeping the price down. So a quick flurry of messages to the likes of Longun & Dansun67 had me convinced that A; It was an F5 but had been adapted for hydraulic disc brakes and that B; Dan would have no problems fixing it...

A few days later it was in my workshop, I’d had a chat with the owner and yes, he confirmed it was an F5, frame number F519062 and that at some point (97/9 it had been sent back to Pace for an upgrade for hydraulic disc mounts and top tube hose carriers, also he had a spec sheet/receipt when Stif sold it on in 1998 with full XT and RC36 Pro forks..

So, the plan:
First off, I took some measurements as I had some ideas for a set of bespoke Mint graphics, then it was packed off for surgery at Dr Dans Pace repair emporium... then I got to thinking about kit, the group was an easy choice, it had to be returned to Shimano XT spec, but what year? I remembered the lad wanting a RetroMod so when I stumbled across a NIB 1x11 2018 part group at a very reasonable price, I made a low offer which was accepted. :xmas-wink: Now that was the chainset, rear mech, shifter & pedals sorted.
The rest of the components?

Well, all will be revealed in the next thrilling instalment of 'IT’S A PACE JIM, BUT NOT AS WE KNOW IT…..' :xmas-big-grin: 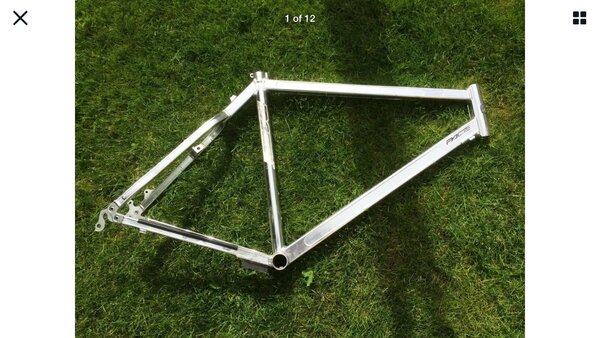 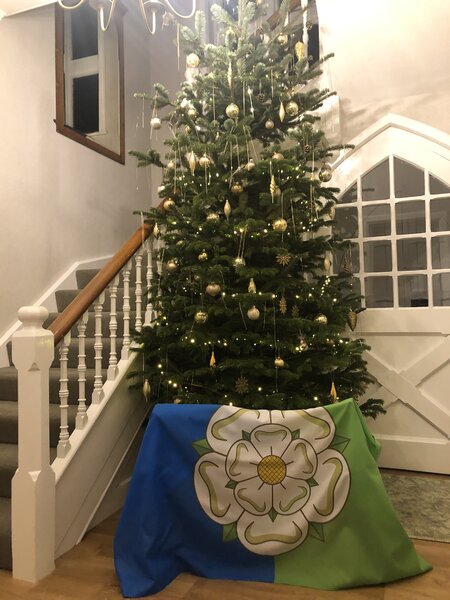 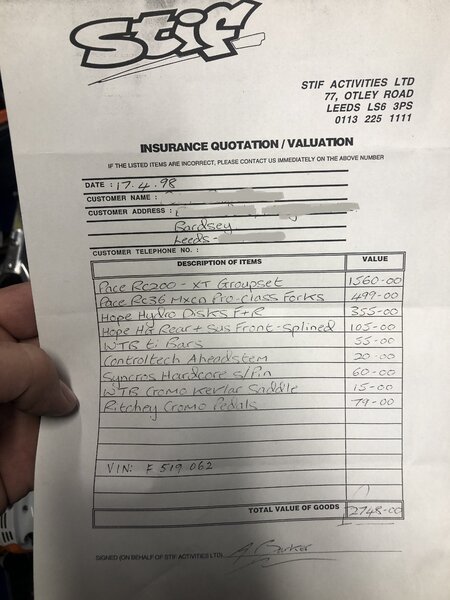 Let me be the first.

and great to see the receipt, £355.00 for the brakes, not much difference nowadays.

and great to see the receipt, £355.00 for the brakes, not much difference nowadays.
Click to expand...

Morning & Merry Christmas! :xmas-big-grin: I must admit I was surprised at the original cost...The only bike I ever bought new was a Giant in ‘98, that cost £350 & I thought it was too much! :facepalm: :shock:

We want more. Not appreciating the Pace pace.

Awesome buddy,pace day out next year then
You must log in or register to reply here.