My Karakoram was my first retro bike when I bought it a few years ago. It was well used and a mixture of original and replacement parts. I got it for a bargain £30-£40 on eBay.

I rode it as it was for 18 months, but once I had decided it was very much a bike I liked I started collecting up replacement parts and then started to strip it, ready to have the frame powdercoated (at Triple S).

I should have taken pics and started a thread earlier, when it was the complete bike, but I didn't get around to it. Today, I have a day off work whilst I have solar panels installed, so it seemed a good time to start threads for my bikes that didn't have them.

Here's the frame and forks in their current state: 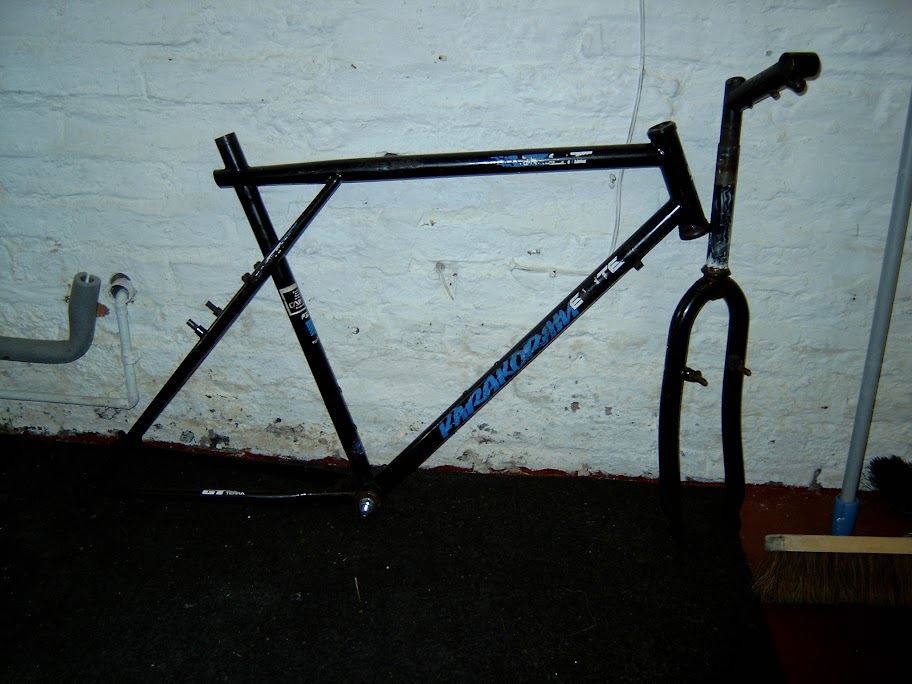 I'll add the component list now with the parts ready to go on it and update it as I go along:

I wanted internal hub gears, to make the bike lower maintenance and fit in with the bullet-proof, do-anything idea.

The rear wheels was not the original one, so I hunted around until I got an Alfine hub at a good price. I then needed a rim to go with it. Initially, I wanted an old Ritchey Vantage Expert in "duranomic grey" to match the front wheel, but decided I would be better served with a modern twin-wall rim, so after much hunting I found one made by Leaf which is a similar colour and also has a similar V profile: 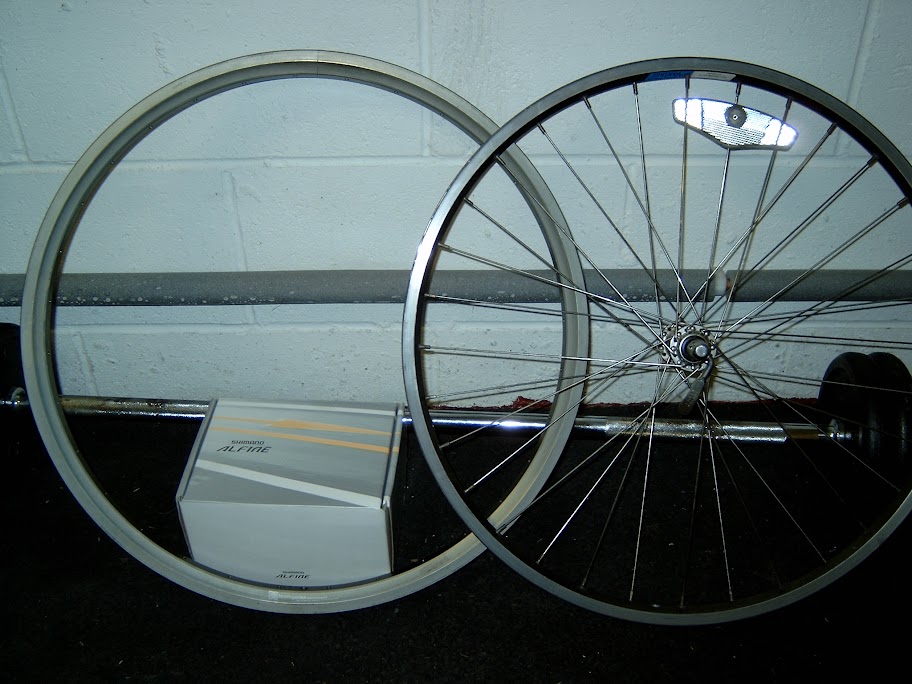 I shall have the wheel built up once the frame is on its way to the powdercoaters.

Well, the frame, forks and stem are at Triple S. The cost is a lot more than I was expecting, in comparison with the prices quoted on their website and I almost reconsidered, but this is a one-off and I love this bike.

I have a lot of rough quotes for building the rear wheel and I'm just waiting for my lbs of choice to get back to me with a final quote, now I've provided them with full details.

I also hopefully have a replacement headset on its way from The States.

I considered replacing the cantis with black ones, as there will be very few silver parts on the bike, but I think I want to keep them, as they are the original DX cantis.

I have a pair of black XT brake levers I might put on, but other than that I think all the parts will be as above. I'm certainly looking forward to getting it back on the road.

MacRetro Rider
Interesting build, did it have a U-brake on the rear ?

Are you going to fit reproduction decals ?

Originally it would have had a DX U-brake, but when I got it someone had put a Dia-compe one, or some such on.

I've bought a black XT one to fit in with the colour scheme ... but not put that on the specs, I'll update them!

I'm undecided on decals ... I might just leave it plain - I'd love to have the Tange sticker on particularly since it came with a rarer blue version of the common pink Tange MTB sticker, but mine is tatty, I don't think NOS ones are about much and the foil-backed ones are hard to reproduce I think.

I meant to take some pictures of the powdercoated frame, forks and stem before I started assembling it, but got carried away.

Just waiting on some rim tape to turn up and I may get it built this weekend. I have everything else I need except not the saddle I want, but I can put another one on for now.

I was gutted to recently find the NOS Tange MTB sticker on ebay in the more common pink, but not the blue that this had originally. I think it's going to remain decal-free, in the hopes it also reduces it's attractiveness to thieves.

vote 1 here for decals. those old karakoram graphics are sublime.

nice build you have there,its interesting to see,just picked a gt zaskar from ebay recently,things to do myself,havent decided what route i am taking yet,keeping my eyes open,good luck with your build,all the best and the rest..

Well, I meant to put a picture of the powdercoated frame/forks and built Alfine wheel a few months ago, but didn't get around to it. I started building it up a few weeks ago, having got the last few finishing touches, and hit a snag. The Alfine uses a very close chainline and so I didn't have enough clearance on the chainstays to fit the Alfine crank.

I couldn't believe I hadn't considered that issue in my plans, so I left it a week or two in frustration. Last night I took another look at it and I think, that if I replace the 45T chain ring with a 39T then it will just have enough clearance to fit it, so I'm hunting a 130 BCD chain ring that I like (though I may just buy any one to test it).

I imagine I will then probably need to replace the 18T sprocket with a 16T (which is the smallest you are meant to use on the Alfine) which unfortunately don't have the chain guide, to get the gearing suitable.

At least it shouldn't be too hard to sell the unused chain ring and hopefully the sprocket.

I feel a bit stupid for not forseeing the problem, but this is how you learn not to make the mistake again, right?

I'm seriously wondering whether I'm destined never to get my main bike back on the road.

Yet another serious error and I'm left to decide what to do next.

The Alfine crank, of course, only fits a 68mm bottom bracket shell. I should have checked this more thoroughly, but when I bought it, the sales literature said fits 68mm/73mm bottom bracket shell. Of course, this was just referring to the external bottom bracket, which fits fine, but the spindle on the crank isn't long enough. The literature also says the crank is 110mm BCD, rather than the 130mm it actually is, so if I hadn't had it so long that I can't remember where I bought it from I would definitely have asked if I could return it for a refund.

After getting round the chainstay problem by buying an (expensive) new chain ring, I've hit a point where I'm going to have to accept I need to change my choice of crank. I need something that will give me a 42.5mm chainline and if it was 130mm BCD it would be a bonus as I would then have a chain ring that gives me the correct ratio for how it's set up now and still has enough chainstay clearance.

I was only really going to consider black cranks, given the colour scheme on the bike has very little silver on it, but now I'm considering using the FRM CU2 Evolution cranks I already have - although they are silver, they have a black spider, so they might look alright (well, better than alright, they have to look amazing).

Any opinions or advice gratefully received as I'm feeling a little directionless, as the Alfine cranks were a big part of the build - I decided on them before I decided I was also going to use an Alfine gear system!

For reference, here is a pic of the cranks: 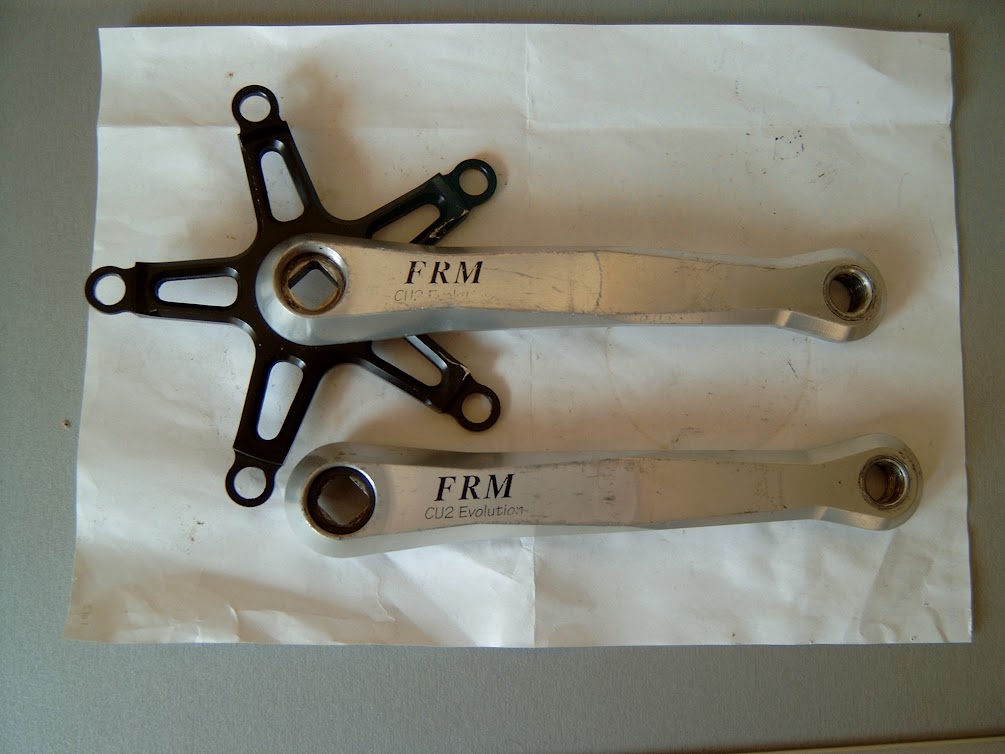 Here is a pic of the rolling chassis as it is: 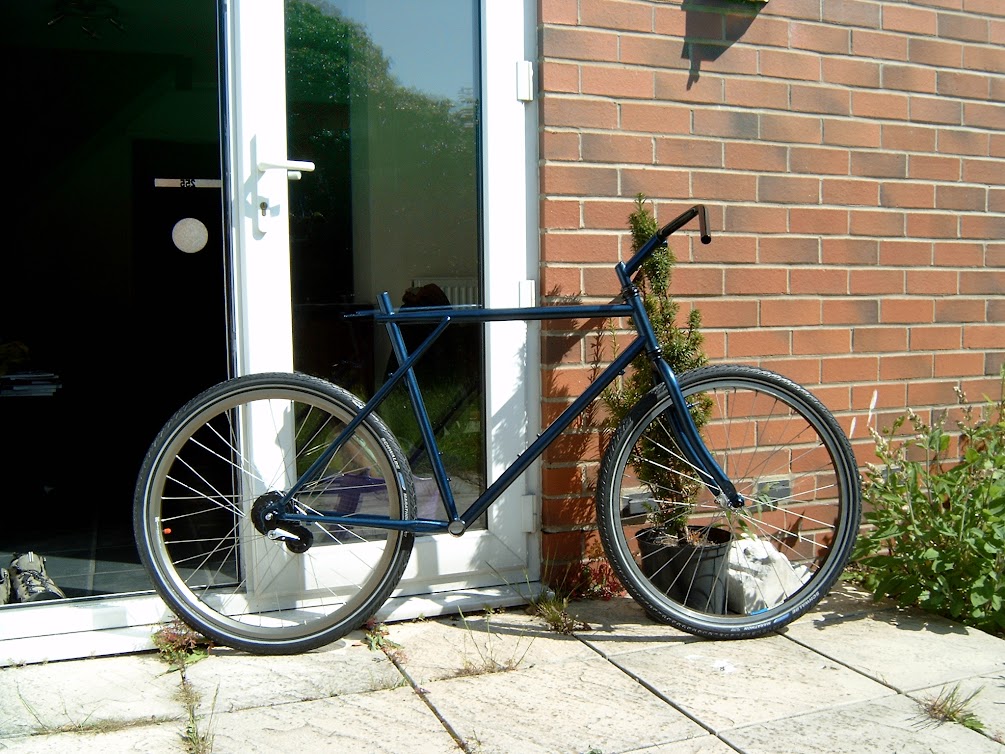 And here's an extra pic of the new paintwork, just because I hadn't taken any yet: 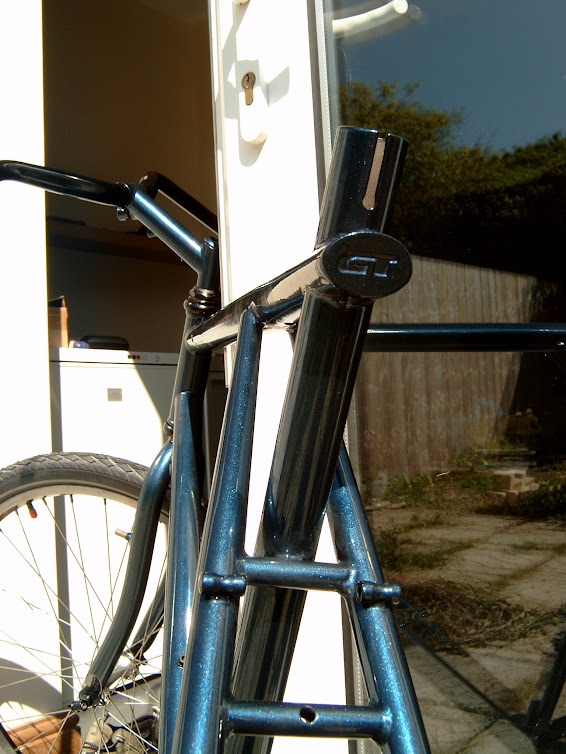