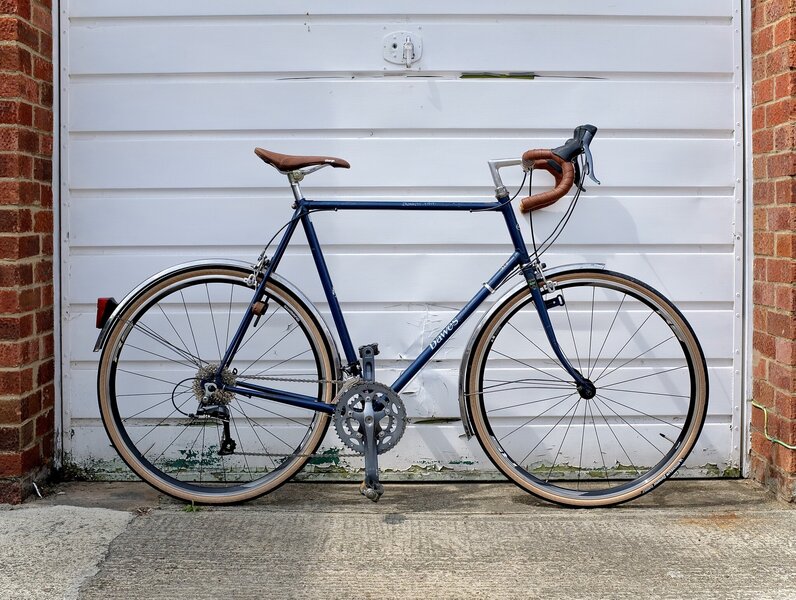 My Dawes Ambassador is my second old steel frame I’ve owned but the first I’ve properly upgraded like this - I used to have a Raleigh Winner but I had to sell it when I didn’t have room for it at uni The bottom bracket was seized in the Raleigh anyway so it had limited upgrade potential. I started off with the brown tape and later went for a more modern look with compact bars, aero levers, and the Cinelli tape. 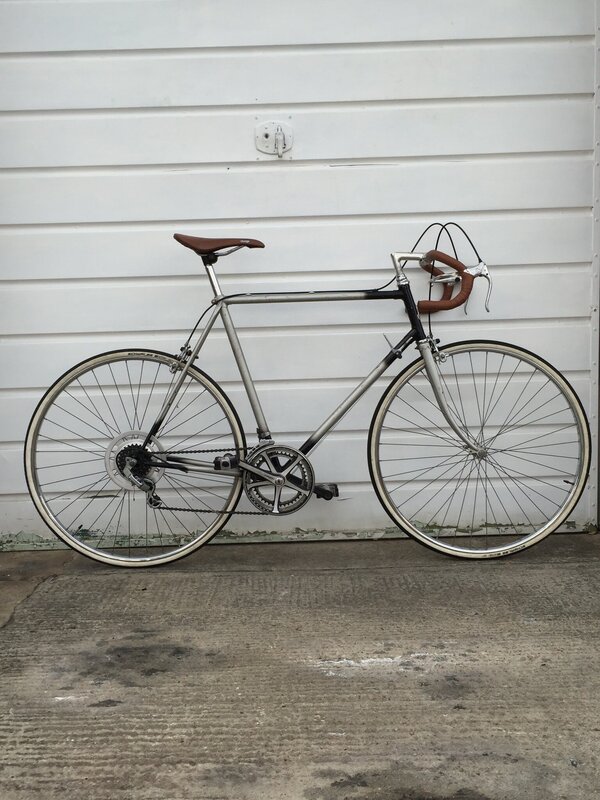 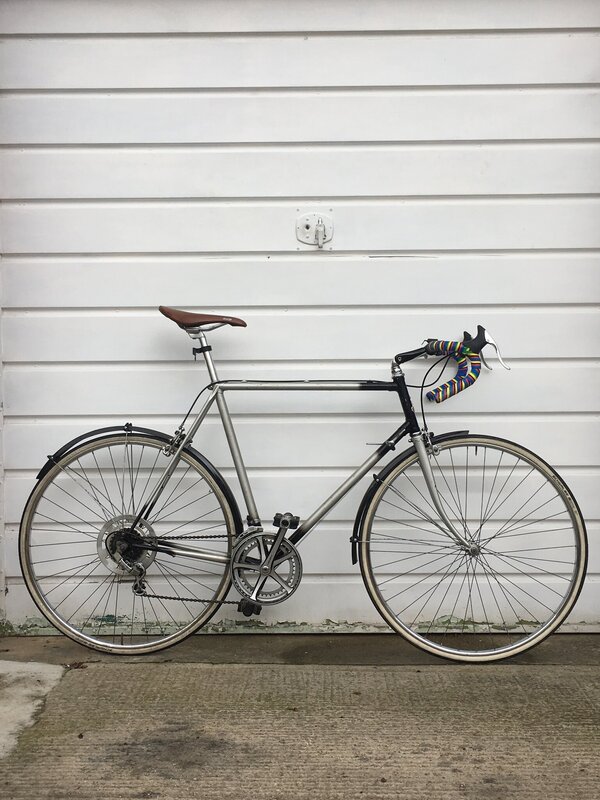 In the meantime I picked up a used Scott Speedster (Tiagra, approx 2013 model) which was promptly nicked out my apartment building. It was a great bike and my first experience of a modern groupset/STIs but I never really enjoyed the rigid ride of the aluminium frame so I hunted down another steel bike to replace it. 2 years ago I found my Dawes Ambassador (63cm frame!) for £100 on Gumtree. It’s not the lightest steel frame in the world (Dawes Supertube + 531 fork) but I was more interested in comfort than raw performance anyway and I loved the colour. 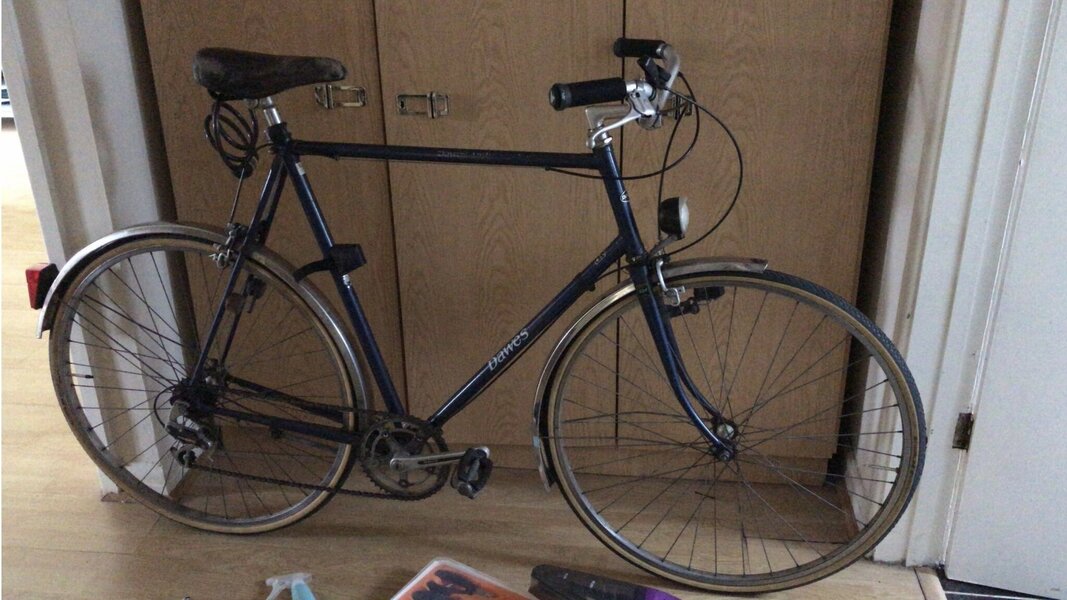 It was in a pretty sorry state where a lot of the parts were original but I’d mostly bought it with the aim of eventually upgrading it into something a bit more modern. My plan was to build it up into a relaxed tourer with STIs, 700c wheels and drop bars; I love old steel frames but I’m not a fan of the mechanicals from that era. I started picking up parts for my Dawes upgrade a few months ago so it’d all be ready to build when I graduated from uni this summer. I started tracking down a complete Claris groupset this April and found one in decent condition for £150 on eBay. I paired this with a new Shimano RS100 wheelset (£90) and some old Dawes randonneur bars I came across on eBay for £15.

I’ve finally had a few weeks to get stuck into upgrading it recently after finishing uni. The freely moving stem and seat post were initial good omens - the previous owners seem to have taken good care of it, with some mild surface rust in spots being the worst offender. Locking the rear wheel in the frame lock when I didn’t have the key was probably the biggest annoyance about the entire build in hindsight; drilling the lock out took care of this in the end. My fortune peaked on this build when the LBS was able to remove the old bottom bracket while I waited!

I haven’t got too many pics from the build process but it generally went pretty smoothly. I had to pick up extra little bits and pieces that I’d forgotten about like cable stops, a derailleur hanger and a front mech braze on adaptor but it actually went together pretty easily in the end. My concern about the brake pads not reaching the smaller 700c wheels turned out to be a non-issue - the Weimann Type 730s are the only mechanical component to have survived the overhaul. The biggest problem with the build was that the 113mm bottom bracket that came with the groupset was a touch short. I spent a while faffing around trying to make this work (big ring was catching on chainstay, chainline was bad) but picking up a new 121mm BB solved all this. I didn’t bother spreading the seatstays out from 126 to 130mm so it’s a bit tricky getting the back wheel in and out.

Now it’s finished, the bike is great fun to ride. I’ve been dialling in the saddle/stem/hood positioning over the first 25 miles and now it’s as comfortable as any other bike I’ve owned. The difference in acceleration with the modern wheels is night and day compared with the original steel 27x1.25” and the convenience of STIs is unrivalled in my opinion. I love how it looks and the ride isn’t as rigid as the aluminium frame was. I can’t wait to start putting some miles on it!

There are definitely some things that I’ll be looking to upgrade in future - the original Weimann sidepulls are a bit weedy so I’m going to be upgrading the brake blocks at the very least. The 121 width BB also means the front mech (Sensah Empire) is now at its absolute limit when in the big ring and it doesn’t quite clear the chain when using the smaller sprockets. I’d appreciate if anyone has any recommendations regarding how to improve this. I’ll probably get some new pedals on it eventually.

I’d thoroughly recommend this kind of project to anyone considering it, although it was made significantly easier in my case by having a garage + bike stand and my dad having loads of tools to use. I was roughly aiming for a £500 total build cost so I was very pleased to be so close! If anyone in the Gloucester, UK area is interested in the parts that have been removed from the before pic please get in touch.

It is the sort if thing I am looking to do myself with a steel frame and more modern components.

A Falcon I have just picked up will be an acid test for me though, as a brief test ride using it's down tube shifters oozed charm. I haven't used dt shifters since the late 80s on my teenage Peugeot racer and really enjoyed the experience. I suspect the nostalgia won't last ;-)
D

It is the sort if thing I am looking to do myself with a steel frame and more modern components.

A Falcon I have just picked up will be an acid test for me though, as a brief test ride using it's down tube shifters oozed charm. I haven't used dt shifters since the late 80s on my teenage Peugeot racer and really enjoyed the experience. I suspect the nostalgia won't last ;-)
Click to expand...

Downtube shifters are an interesting one, I like how tactile they are but I never really enjoyed using them. Balancing while shifting def took me a while to get used to. Good luck with the build!
A

Cheers, the older I get the more nostalgic I get lol
You must log in or register to reply here.