What year is this yeti? 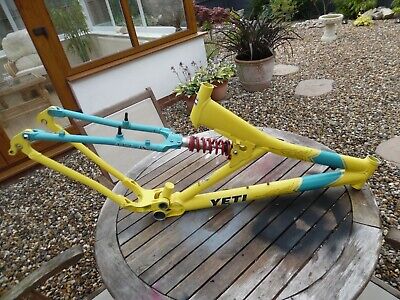 Find many great new & used options and get the best deals for Yeti A.R.C A5.3 Full Suspension Mountain Bike Frame 26" Wheels + ROCKSHOCKS at the best online prices at eBay! Free delivery for many products!
www.ebay.co.uk
S

98.. but a lot of Yeti lovers wouldnt consider it a yeti. designed by schwinn.

I thought Schwinn used Yeti's design for their frames? And I thought some were even built by Yeti?

scant said:
98.. but a lot of Yeti lovers wouldnt consider it a yeti. designed by schwinn.
Click to expand...

And they weigh a ton too.

work colleague brought it to my attention ... he was having a sniff but getting no response to his questions from seller
S

& the back ends were pretty flexible as they're pivoting off the tiny shock shaft.... & the chainstay yoke has a rep for cracking

Ah, it be '97 Mike ;-)
That said, as we know, the smaller companies like Yeti never really did the year-on-year updates like the big-boys so a lot of the models blurred the years.
There is a catalogue scan on the Yetifan site. It's a pretty large file, so download may take a while:

I think the anecdote you told me Mike when talking to Chris Conroy went something like:
"Tell me about the AS-3"
"Yeah, sorry about that".

That said, I've always thought it was quite a pretty bike, particularly as I like the look of the yokes. Very similar parallels to a Manitou in all respects though.

the yeti diehards know its not a yeti

Yeti Fan
That is not a Yeti. By a Yeti Diehard.
You must log in or register to reply here.