The Longest Twelve Days of my Life

Manitou Fan
Thursday the 18th of October was a good day..a very good day. It's my day off and had arranged to meet a guy at the M62, M1 junction to pick up some Carbon Girvin forks as we both didn't want to risk sending them and he was on his way up north. 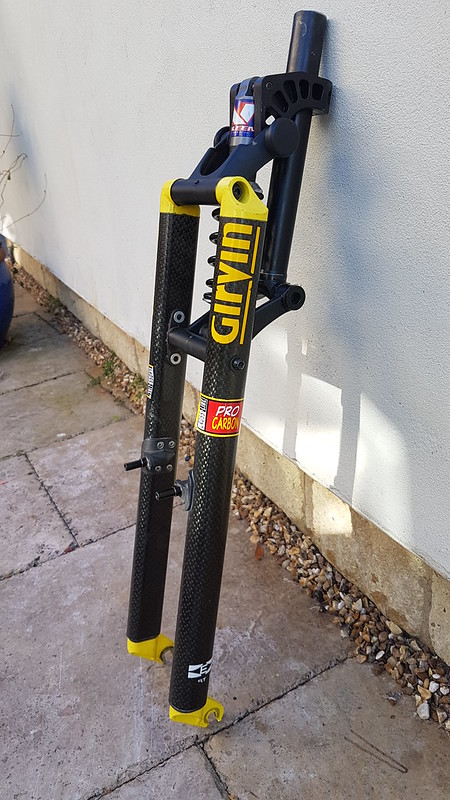 They cost a bit but way less than recent one's that have gone on eBay and they were in very good condition, so I was very pleased. On the hours journey back home I was pondering my Retrobike habit and congratulating myself on the last major piece on my retrobike list. I now had all the weird and wonderful early nineties bikes I lusted after in my early twenties and some cool parts to build them up (well haven't got a Tioga Disk Drive yet but one day...one day).

But there was a nagging doubt at the back of my mind, there was one bike that was on the list but the chances of ever getting one was so remote that I was prepared to let it go.
I remember reading MBI back in October 1993 and seeing the article on this bike, I wouldn't say I lusted after this bike because at £2900 it was just so unobtainable and I was a realist. I was very happy with my Scott Superlite and brand spanking new Pace RC35 AB forks thank you very much. 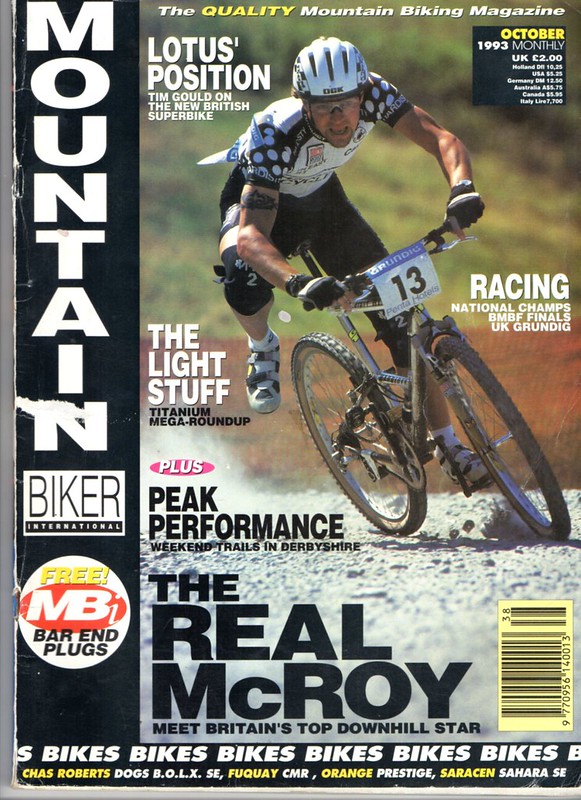 I found these scans on the web a little while ago and that cover brought back so many memories. I still have the MBI bar end plugs( they are purple) but the MBI logo has been ground off by years of scrapes against drystone walls and crashes. But the original article just brought it all back to me. 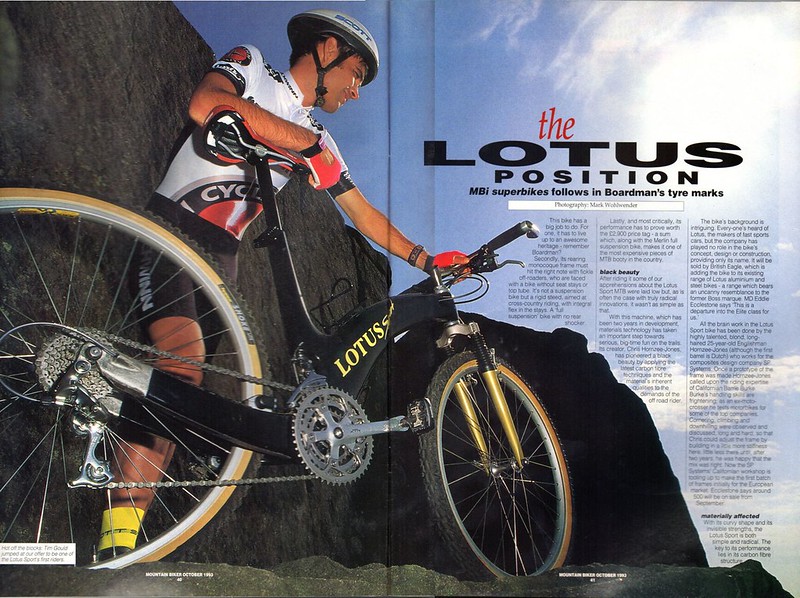 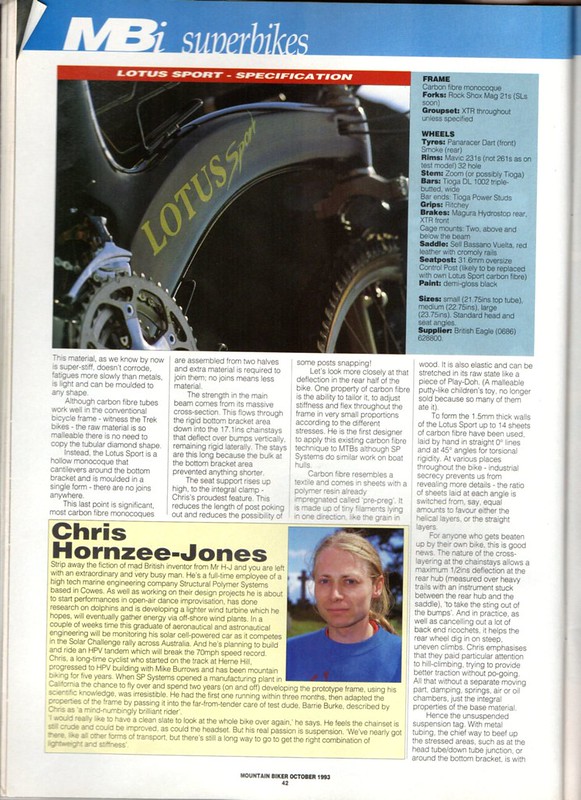 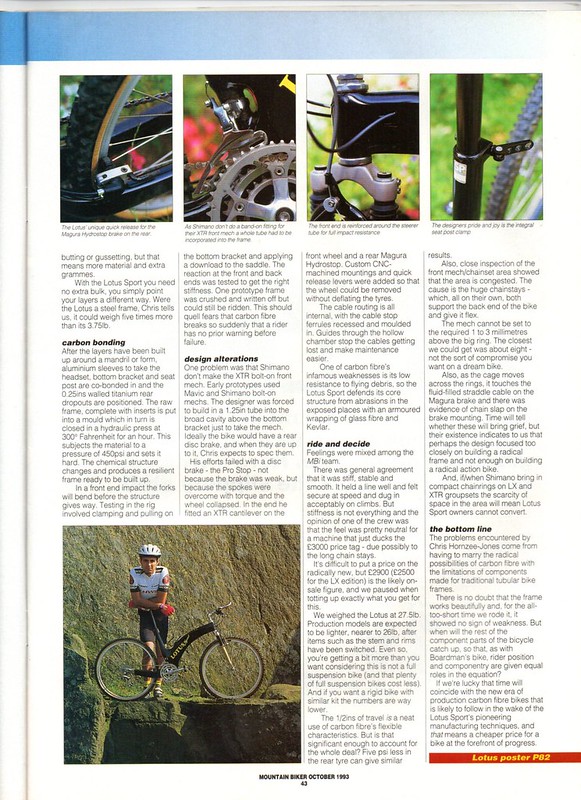 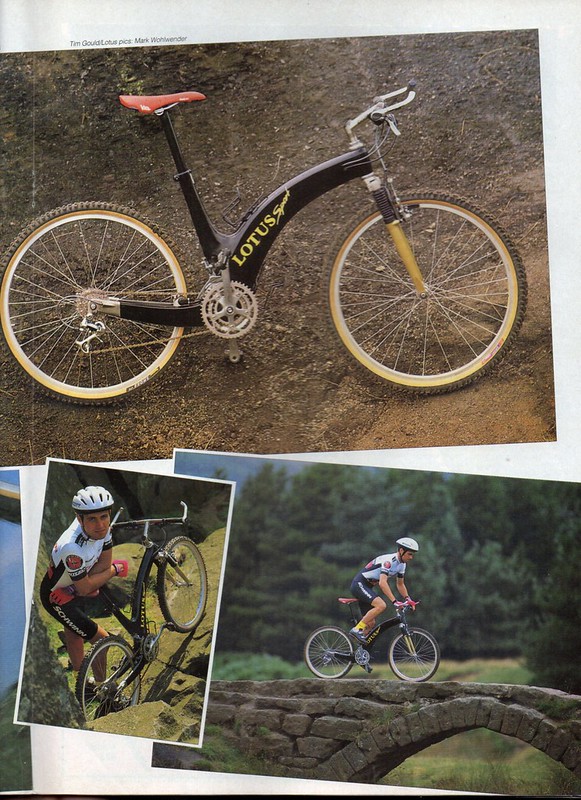 So by now you've guessed that the bike in question is a Lotus Sport Monocoque Mountain bike.

So in 2013 I read "My Teenage Self's" post about his quest and success in finding one. It was a brilliant and inspirational thread and did give me a vicarious trill, but made me realise that I again should be a realist and the chances of me getting one were very slim.

So these were the thoughts that occupied my mind as I drove back to North Yorkshire. I got home, made myself a coffee sat at the computer and did a bit of paperwork but the thought of the Lotus was haunting me, so I thought why not have a google image search and have a look at the bike one more time.

There are not a huge amount of images of the Lotus on the web..there's My Teenage Self's photo's of course, an article from 2015 in MBR about the bike and Chris Hornzee-Jones the father of the bike and an amazing shot on the Aerotrope site (Chris's company) but not much else..I had got down about 4 pages when an image that I had not seen before caught my eye 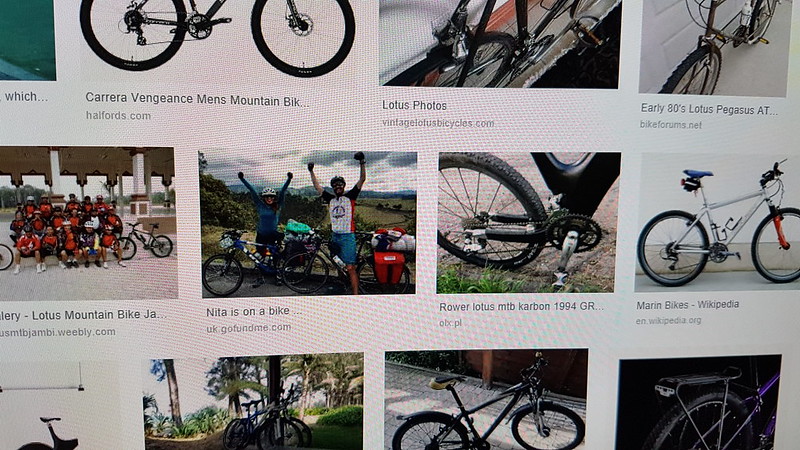 It said "Rower Lotus Karbon MTB 1994" and there was the unmistakable form of the Lotus but with later XT parts(M752 to be precise) and Crossmax wheels. My ears pricked up and the hairs on the back of my next stood on end...I clicked "visit" on the image and saw this: 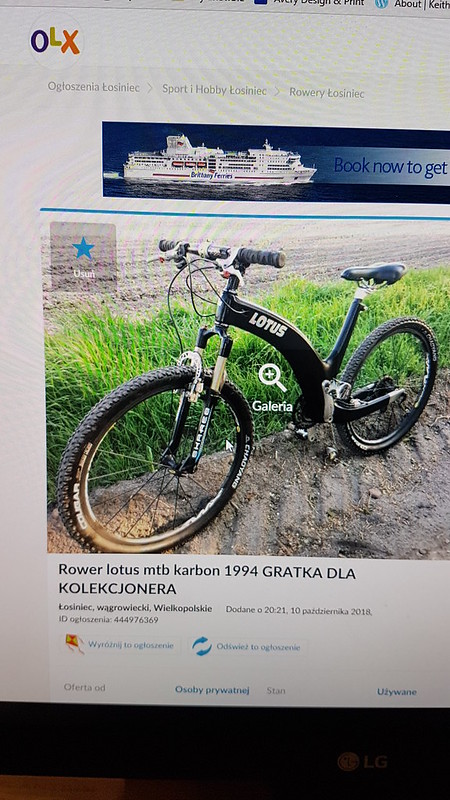 It was some sort of Polish ebay or Gumtree type site...Still this was probably an old advert and the bike was long gone..but then I noticed that the date was 2018...but it was now October so well into 2018, still I thought I'd translate "październik" to see when it had been put on so good old google translate to the rescue...turns out październik is October!!!

So now my stomach starts turning somersaults..so translate the whole advert. The vendors know what the bike is but no other information. The selling site works via Facebook so both the buyer and seller can see each other's profile, so I register via facebook and the vendor owns an antique type warehouse and has other bikes for sale but just normal run of the mill stuff. He has numerous good reviews on Facebook and looking at the profile looks like he is an upstanding member of his town.

Well it's been 8 days since it was posted up and surely somebody else has seen it and has bought it (the asking price seems fair for what it is), so I message him explaining I can't speak polish and would like to buy the bike....Then nothing...nothing the whole of Thursday...go to work on Friday (where I can't see my mobile for large portions of the day)...nothing...lunch..nothing..Start to think that either he doesn't speak english or as I suspect the bike is long gone.
Getting changed to go home at 5pm when "ping" a message pops up fron OLX.pl (the selling site) with a big blue button..Even though I speak no Polish I can see from the format that I have a message, I press it and it reads "I am answering for my Uncle who doesn't speak English but I do as I lived in England for a while. The bike is still for sale, give me your mobile number, I am busy tonight but will ring tomorrow"

Blimey...Was this really going to happen..drove home in a daze but then suspicions crept in..is this the real deal or a scam, what the hell is a Lotus with later parts and odd decals doing in Poland. To assuage my fears there was only one man to contact, My Teenage Self.

Fortunately he answered quickly, told me what pics I should get, where the serial number should be and asked if he could see the link (promising not to buy it out from under me ). After confirming he had never seen those pictures before and that it looked to be what it said it was I messaged the seller to ask for specific pictures.

The next day the vendor's nephew contacted me by phone and messaged me the pictures straight away so it looked like it was in their possession. I was happy not to quibble about the asking price and they were happy to post by DHL and assured me that it would be packaged correctly. I paid by Paypal that day and paid the fee's (which were £35) but gave me some comfort if it was actually a scam. They said they would try to get it posted on Monday.


Then nothing for 4 days..no contact..no nothing despite me messaging to ask on progress. I was getting worried

Wednesday morning finally got a message apologising that DHL were not playing ball and they needed to find another courier. I was still thinking it was a scam despite the vendors seeming genuine....Then nothing again until Friday when they said UPS had picked up on Thursday and gave me a tracking number. What I failed to realise is that the messages were to the Uncle who can't speak English and had to wait for the Nephew to finish work, go and see his Uncle, translate and then reply, so often a 24hr delay in reply.

So logged into UPS and there it was in Transit from Poland, scheduled for delivery today, had a more relaxed weekend and started planning (Hence lots of wanted ads on this forum)

And at 11am today this arrived.. 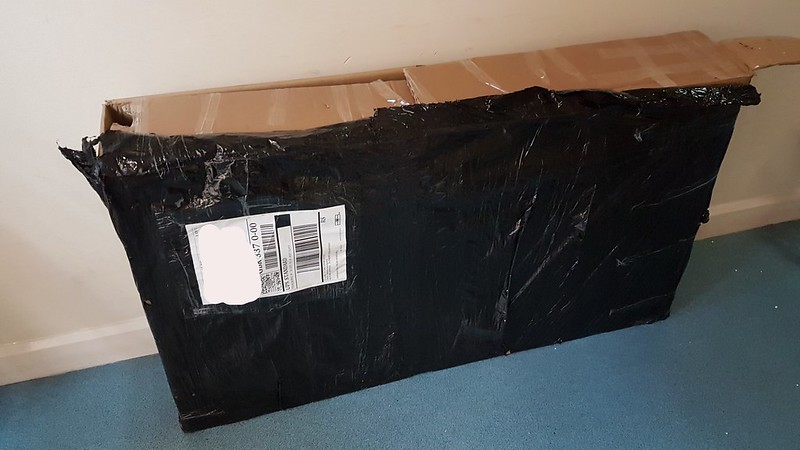 I meant to take a photo before opening the box but in my excitement to see it I forgot all about it. They had packed it beautifully so no damage and so... 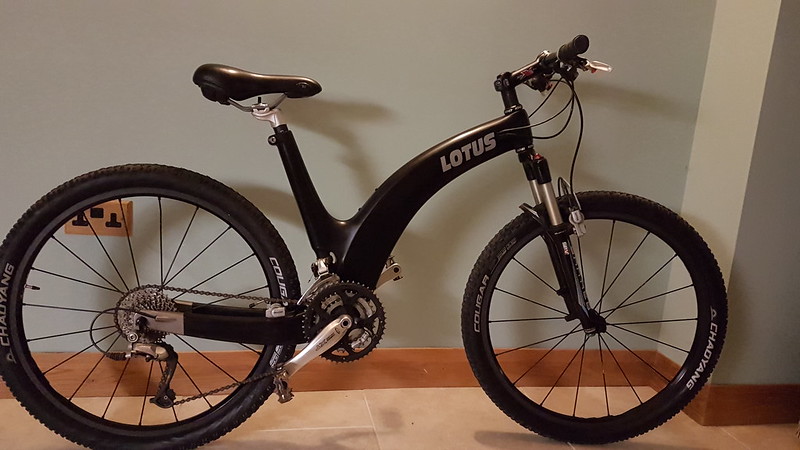 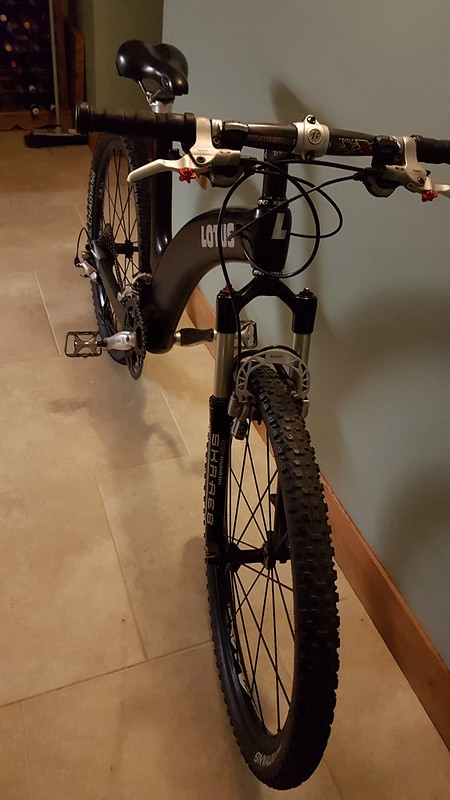 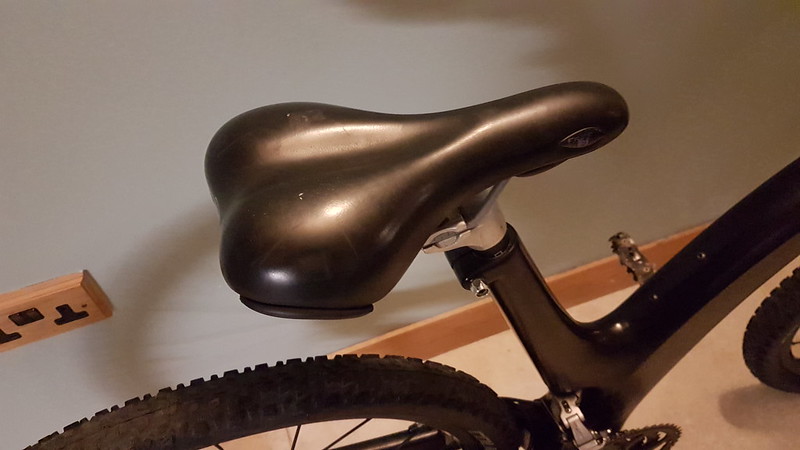 Got to say I'm loving the saddle!! It's karma for anyone who wants it :facepalm: I'll even pay postage just to get it out of my house :shock:

The noughties parts will not be on it for too long but I will at least pump up the tryes and go for a little thrash before the build starts.
So there you have the longest 12 days of my Life. Sorry if I have rambled on a bit but I can't believe I was in the right place at the right time. I will start a build thread soon but now I need to go into the garage and stroke the downtube

Did you ever find out how it ended up in Poland?

And were those the forks off the 857? i was watching that

But the question is do you want the saddle!!

Did you ever find out how it ended up in Poland?

And were those the forks off the 857? i was watching that

No idea how it ended up in Poland.. I have a theory but will share when I have some more info.

Yours is now the third frame owned by a retrobike member that I'm aware of;

Yours is now the third frame owned by a retrobike member that I'm aware of;

Those forks and the wheels will look awesome mate, I’ll pm now.

Manitou Fan
Re: Re:

Fantastic
You must log in or register to reply here.