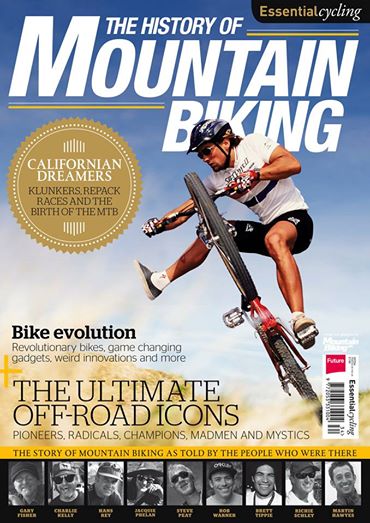 I read lots of mountain bike magazines. There’s currently a four foot high stack of them in my back bedroom. I’ve taken out subscriptions to all the major ones at some point over the last 20 years and even had articles and photographs published some of them.
So I am always a bit sceptical whenever I see a feature on the history of mountain biking. Experience tells me that it’s usually a disappointing sidebar feature which is compromised by brevity and sometimes spoilt by inaccuracy.

A few publications, notably the now defunct Privateer, have got it right though. Nice long in depth articles from highly regarded sources; so when ‘The History of Mountain Biking’ landed on my doormat I wasn’t expecting to be impressed.

On a first quick flick through of the 154 pages I was struck by the lack of advertisements. In fact unlike the mainstream magazines which have so little content compared to the volume of adverts, this had none, apart from on the inside covers. This was all content; a good prospect.

Scanning through the list of contributors revealed a range of very highly regarded journalists and significant figures in mountain biking’s past and present.
Tym Manley, Charlie Kelly, Steve Worland, Jacquie Phelan, Steve Behr, Wende Cragg to name but a few...

The first article written by Tym Manley, is engaging and well written, summing up the story behind the ‘official’ rise of the mountain bike in California. It’s in depth and really sets the scene, introducing many of the key figures of the time.

Charlie Kelly’s article about the Repack downhill races really is excellent and is embellished with Wende Cragg’s photographs of those early Klunker rides and races. Perhaps that article alone is worth the £7.99 cover price.

The publication takes in profiles and interviews with so many of the figures from the late seventies each added a thread to the story.

But just in case you are thinking that it’s all turning into a Marin County love- in, the editors introduce a nice clear counterpoint to the official myth, with articles and images including The Rough Stuff Fellowship and of course Geoff Apps and his Cleland bikes.

There is a good article about the early UK scene, which discusses how brands like Muddy Fox, Ridgeback, Dawes, Saracen and Overburys emerged to capitalize upon the US fad of these shiny exotic mountain bikes. There’s reference to Jeremy Torr and Max Glaskin and the Mountain Bike Club. The heady days of UK cross country race weekends are covered along with the evolution from simple do it all bikes, to increasingly niche technological advances and aspects of the sport.

The content mostly focuses on the individuals and personalities that have shaped the way mountain biking has grown. Most of these individuals have contributed with either articles or by participating in interviews. This adds credibility and authenticity to the story as it is told.
There are also a plethora of high quality photographs to satisfy all the technology enthusiasts and component fetishists.

This of course brings things all the way up to date with the inevitable ‘we’ve never had it so good’ articles about technological advances, purpose built trails, Olympic status and investment in the sport.

I’m sure most would agree that modern bikes offer a faster, smoother, more comfortable ride and that groomed, sculpted trails offer the chance to do a bit of antisocial Strava fuelled ‘schralping’ like never before...

Hopefully the History of Mountain Biking can introduce a few more people to the origins of the sport which have, over the years been retold, lost, regained and perhaps revised a little.
It’s good to have some context. This magazine is a very good starting point.

Nice premium magazine, just be careful yours is complete before you buy it.

I bought a few copies to send out to friends in other countries but each one had 20 odd pages missing and 20 pages repeated - very expensive mistake at £8 a magazine plus postage and very annoying for those who received them. The worse bit was the best article were missing and I had repeated photos of Gary Fisher looking like a dirty pimp!
H

Surely something there for anyone with half a mind to visit this website......I've only purchased it today and had a cursory flick through, but I will certainly delve further in over the next few days. The asking price seems good, it must have taken some putting together. It really warrants a hard cover for a more permanent place on a retro rats book shelf.
I would have welcomed a more uk centric look back at the local scenes. No mention of the likes of nemba, or the midlands based areas for example, which would mean so much to a uk audience. Naturally the classic is talked over, but the bosley mudslide?.....astley?......Plymouth?......clipstone?........but it looks great no the less.......a great reference point, and a rare moment of childlike excitement while queuing in asda!......
J

Just purchased this magazine, initially sceptical about the cover price for a magazine I soon realised that it was well worth it.
Well written, with plenty of input from people in the business, and lots of quality color photographs.
It's rare to find so much on the history of the sport consolidated in one place.

A good buy, and worth keeping.
G

I highly recommend this magazine that covers the history of both US and UK mountain biking, often told through the words of those who made the history or saw it happen. And It's this personal viewpoint that helps to bring the history to life. I agree that the work that has gone into compiling this history makes it well worth the price as it is more of a soft cover book than a magazine. I am not qualified to critique the US history as I was not there, but the early UK history is a good representation of what actually happened. There are many minor factual inaccuracies but these are understandable as few people were taking notes at the time. For example, Muddyfox are described as "the company that led the MTB scene in Britain..." And apparently "Saracen started in 1987". Which does not explain why the Advertising Standards Authority let Saracen claim to be the first UK built mountain bike in 1984 and best selling in 1985?
Also the early links between the US pioneers and the UK were far stronger than suggested. In fact Fisher and Kelly were both Roughstuff Fellowship members, and in the words of Kelly had a "spirited correspondence with Geoff Apps that started in 1980. This exchange of information and the big diameter Hakkapeliitta tyres Apps exported to Fisher and Kelly explains why "a few US frame builders were also experimenting with big diameter wheels at the time" Later on, a few left over tyres were to inspire the movers and shakers behind the fledgling 29er movement.

But all things taken into account, this is by far the most complete history of UK mountain biking that I have seen.

pete_mcc said:
Nice premium magazine, just be careful yours is complete before you buy it.

I bought a few copies to send out to friends in other countries but each one had 20 odd pages missing and 20 pages repeated - very expensive mistake at £8 a magazine plus postage and very annoying for those who received them. The worse bit was the best article were missing and I had repeated photos of Gary Fisher looking like a dirty pimp!
Click to expand...

Now that is worrying. I'll wait till I can look at it in WH Smiths. If in business

Quite an old article @tintin40 , not sure if this mag is available anywhere currently :/
You must log in or register to reply here.