rBotM Winner
Hi, I've always been interested in the unusual Raleigh "specials" that come to light every now and again. As a lot of people already know, if you worked at Raleigh and had the right connections you could get a one off bike built, rescue a prototype from a skip or build your own on the night shift. Being a Nottingham guy and having spoken with many ex-Raleigh employees, including managers, I believe this to be true.

Looking for your thoughts on this Raleigh RRA “special”, I've done a lot of head scratching but still made no decision.

I already have one pre-war RRA model 45 from about 1939 and three post war RRAs model 26s from the late 40s early 50s - some of which I've posted on here at sometime or other – must take a group shot when the weather allows.

This one popped up on the ever popular auction site about a year ago, bought it locally from Nottingham, advertised as a Raleigh RRA year unknown. That spiked my interest straight away (as one more can't hurt can it?) and looking at the pictures I first thought it dated from the 50s due to the immediately identifiable RRA diamond/ fishtail lugs and thimble fork crown, So I bought, paid and went to collect.

The seller said it was his uncles who worked in the offices at Raleigh and he remembered first seeing it new in 1973. This is where the puzzle starts.

It's an all 531 butted frame set with thimble crown forks, round section fork blades and an RRA lug set that Raleigh last used in the mid 50s - no later. The seat stays are considerably thinner than the typical 50s style.

The frame has derailleur cable brazed on fittings and pump clips and bare cable rear brake fittings under the top tube, There are no pips on the inside of the fork blades to accept the clamp on light bracket but there is a brazed on boss on the RH fork blade. All these are features of late 50s/ 60s/70s frames as are the mudguard mounting lugs. The rear spacing is 125mm OLN for 5 speed derailleurs and has not been set.

The decals are 1950s RRA and the 531 decal is early 70s style, the head tube badge is a decal not a metal badge. They are all dry fix not modern vinyl.

The paintwork appears to be all original, metallic light blue over the Raleigh black bonding coat and the chromed ends appear to be typical excellent quality Raleigh.

My thoughts are, bearing in mind that I have researched almost everything written about Model 26 RRAs, is that this is not one of them and it is a frame specially/purposely built in the 1970s using an old stock lug set and fork blades and all early 70s components for a Raleigh employee.

Could it have been modified from a 50s frame? - doubtful the end would never justify the time and effort involved.
Could it have been repainted? - yes but no clear signs of that.
Could it be a later bike made up to look classic? - I don't think that's likely, Raleigh only ever used this lug set on RRAs from 1938 to 1954 plus on a few special frames for the likes of factory supported riders in the late 50s. Thimbles on lightweight forks went out in the 50s. The 80s Record Aces were totally different bikes.

What does the frame number tell us? - well it's not very clear stamping but I think it's 056763AC Raleigh serial numbers were a hotch-potch of inconsistencies through the 50s to the 70s so no help there.

I've now cleaned it up and replaced some of the poor condition components and will post some more pics when the weather improves (as I can't even find space in the garage to reassemble the Mercian!).

So that's it, time for a few pics in as bought condition.

Looking at your bottom bracket shell it has been re-stamped 0573. The original numbers have been partially lost as the shell has been recut and threaded to 68mm 24tpi from the original Raleigh standard 71-4mm 26tpi. Could 0573 be May 1973 when the update was made. The components date from the correct time, the Weinmann brake calipers should have a date stamp on the back. 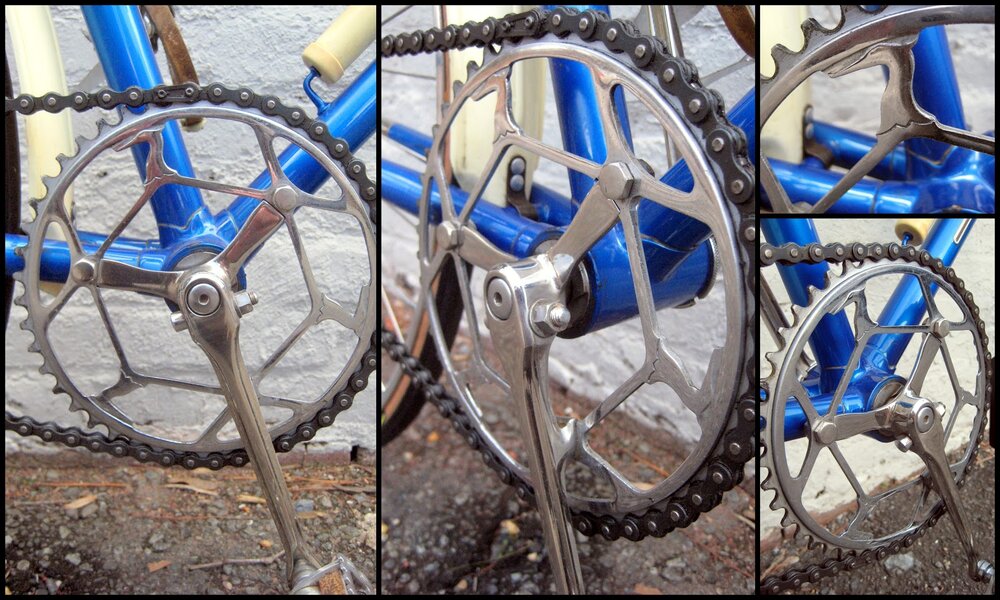 Looks like stock Raleigh US spec components used for stem, cranks, brake levers and transmission from the 73 US catalogue...does the original seller's uncle have a name to tie in the AC stamp.. 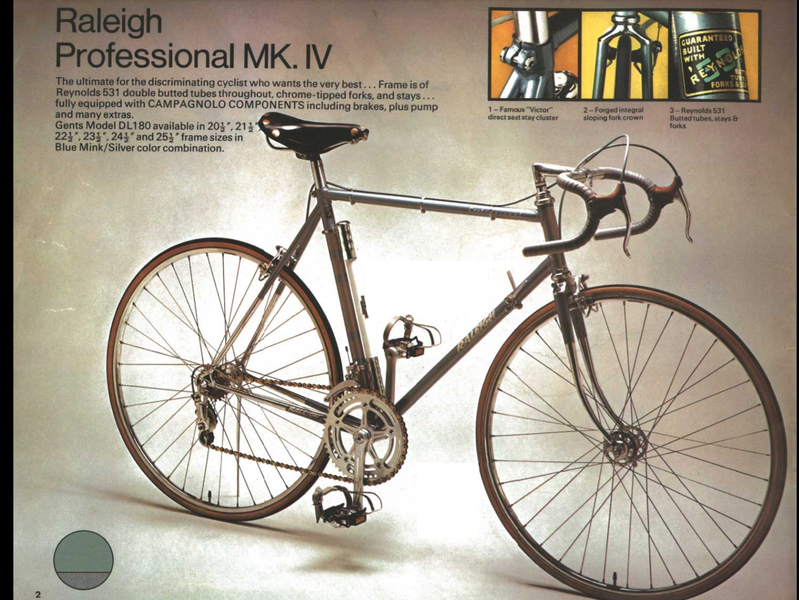 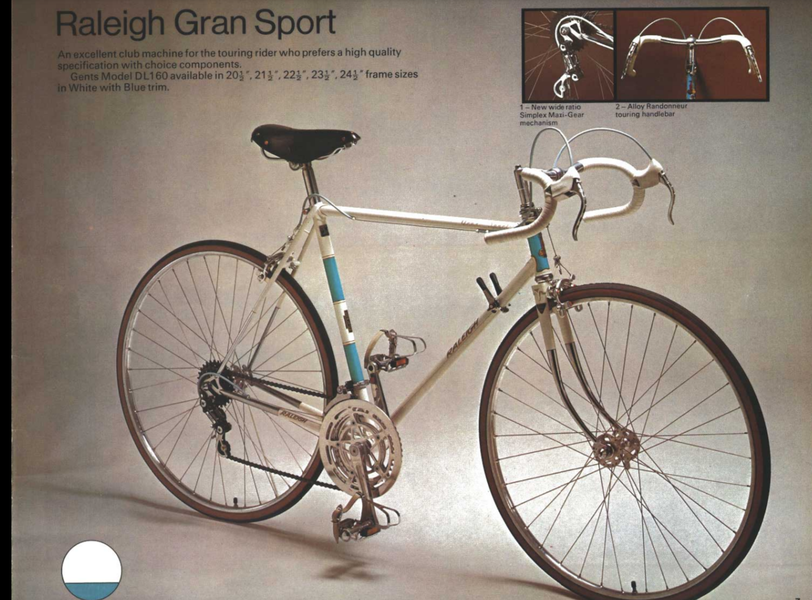 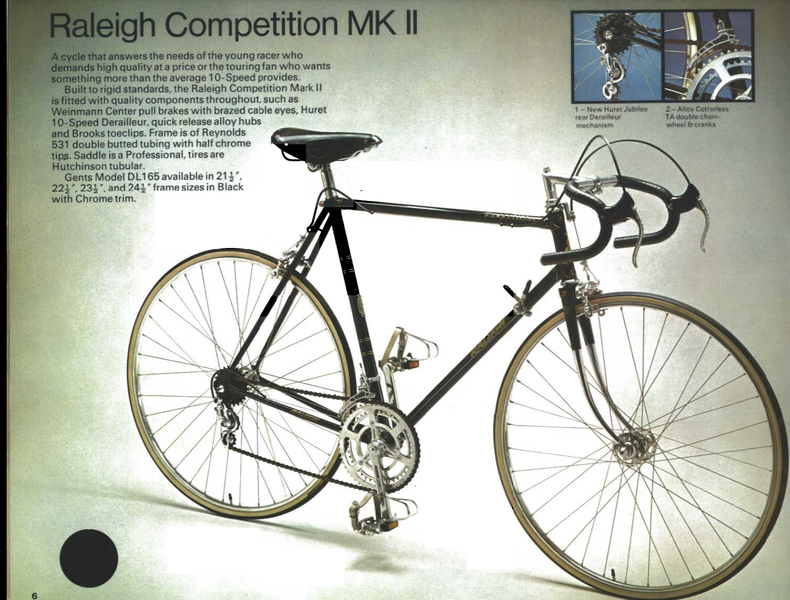 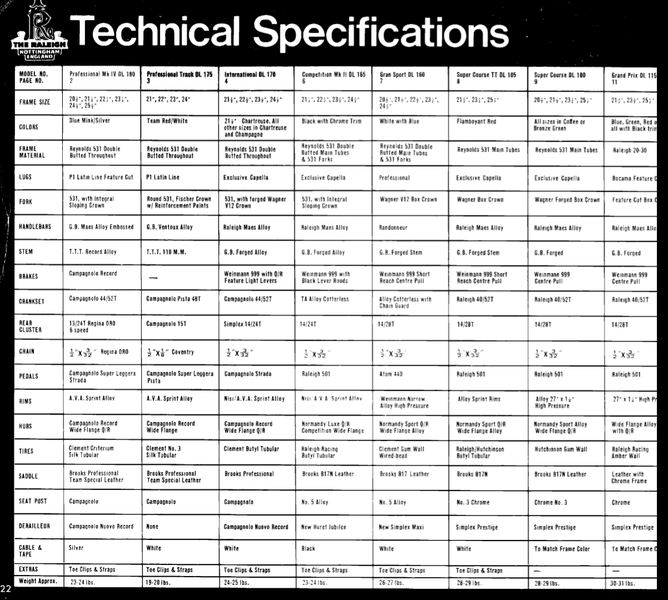 rBotM Winner
Hi, I'm not sure why you've mixed my threads by referring to the number on the bike in this thread and posting pictures from one of my old RRA threads. Two different RRAs.

Didn't know that the cottered crank pictures were yours, just to highlight what looks like a Raleigh bottom bracket.

rBotM Winner
Ah I see.
Yes the dark blue one is mine also, it has a 50s RRA, 71mm 26tpi shell. The drive side cup is non-original as the RRA should have a unique externally concave cup on the drive side (part no S454, see 1948 parts explosion attached) and they are near the top of the list of unobtainable parts. The one in the pictures is a NOS Raleigh Chopper/Superbe one.
The BB axle in those pictures is also incorrect as it should have a through drilled Raleigh A-16N (narrow) axle, also on the unobtainable list, but I managed to find a drilled TDC drilled one that gave the correct chain ring clearance and chain alignment - which is now fitted.
The distance between bearing races on the A-16N (which is made for a 71mm shell with the special drive side cup) is the same as the distance between races on an axle made for a standard 68mm shell.
Regarding the frame number on the light blue frame the first of the two misaligned 6s is actually stamped over the 5, The second misaligned 6 is poorly stamped. I didn't quiz the seller of the bike much but I'll call in when I'm in the area and see what his uncles name was and what position he held at Raleigh.
The BB shell is 68mm and does not appear to have been shortened or re-threaded, all paint is present inside and it's fitted with 24tpi Stronglight cups and axle, re-threaded BBs are easily identified as by about ½" in the threads are so mismatched that they start to tear.
The Weinmann calipers are earlyish ones and undated, they are only stamped "Brake manufactured in Switzerland".

The RRA Model 26 was a really special bike in it's day, with a dozen unique parts that were used on no other Raleigh models and were built to the customers individual specification from an extensive list of options - hence no two were ever completely alike.
Unfortunately those unique parts are now so scarce that even if you do find them the prices are astronomical (used pedals at £350 - 500 a pair!) 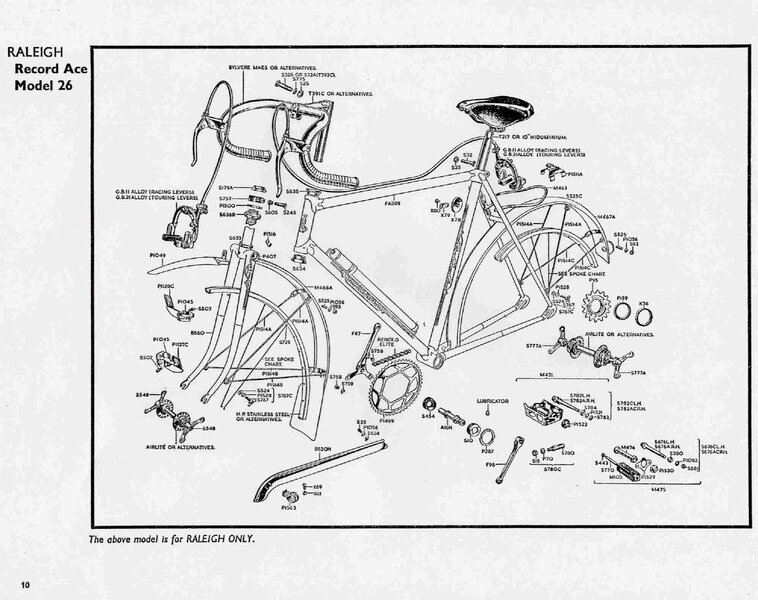 This Raleigh has the same cable guides and pump pegs, not the best of pictures but any idea what model frame..? 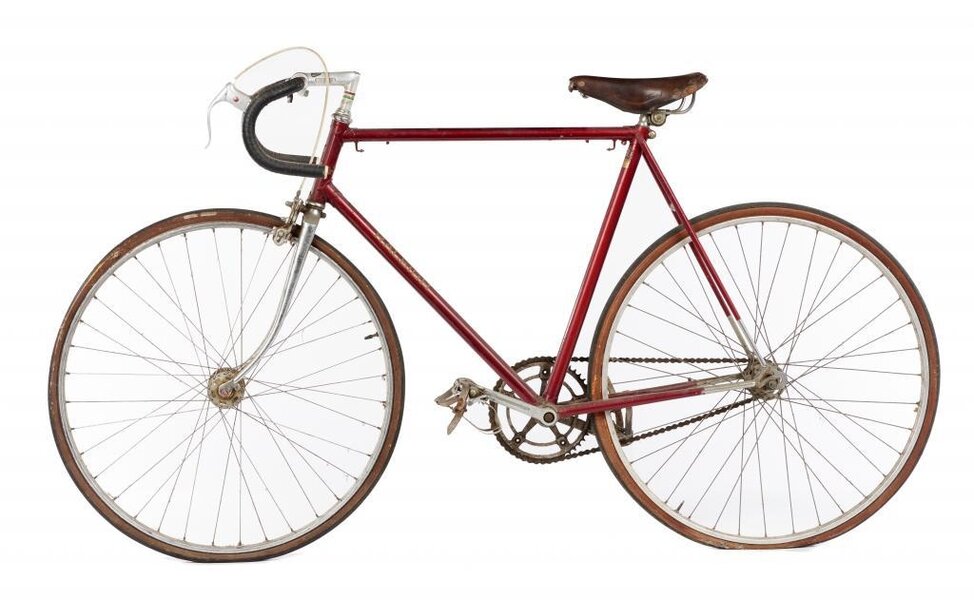 rBotM Winner
Hi, my opinion is a Super Lenton frame with much later forks. 1952 to1956, the chrome ends were introduced in 1955 with full butted 531 tube set.
Peter Kolher did a comprehensive article on Super Lentons and its successor the 1957-58 RRA Moderne. The mudguard mounts appear to be missing from the rear stays though.
A friend picked a mostly original one up last week. 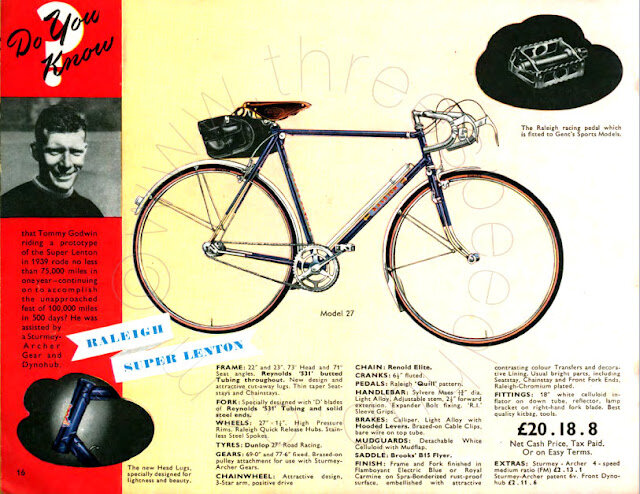 Another one from the same owner who worked at Raleigh, note the pump pegs and your RRA Special..I can see a pattern..! 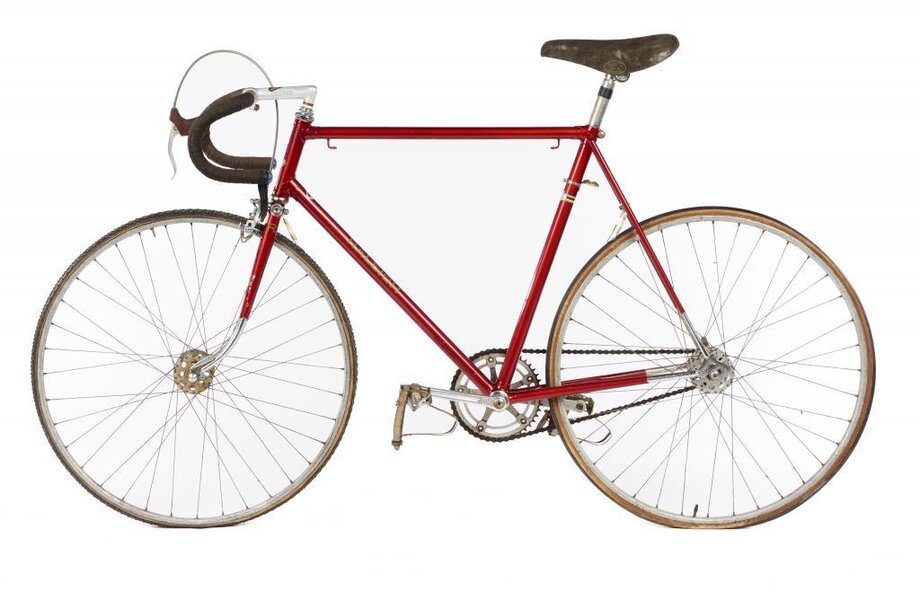 Unusual Carlton - any idea what model?
2