Old Ned":36kto60k said:
Weren't Ottadini frames made in the North East? I'm sure I've got some adverts in old Cycling mags for them.
Click to expand...

They were! Apparently the guy was in the SAS so only made small batches for the local community. If you have a picture of the advert I'd love to see it.
Click to expand...


Ottadini Track Frame
Ottadini frame from the UK.
There's close to none information available, about Ottadini, anywhere... I managed however, to gather some
details based on another track frame I found for sale.
Ottadini were built by a framebuilder called Colin Laing, in Northen England.

"...Colin Laing (as best as I can cobble together) was an apprentice of the Taylor Brothers (Norman, Ken, and Jack Taylor) in the 1950's. Later he had a bike shop in northern England. Bikes were not the only thing in Colin's life though, "My other life involved things I can't speak of due to the 'Official Secrets Act'. Suffice to say I was SAS and the Duke of Kent's body-guard which lead to more extreme service to the Crown."
In 1974 Colin came to the USA at the request of the US government. England's economy was bad in the 70's and there was a bike boom on in the US so he found coming over here ideal. He returned to England for a while in the 80's to have his boys schooled and because Jack was hinting strongly that they might let him take over or run Jack Taylor Cycles. That never panned out but Colin returned to Arizona and continued making bicycles..."
R

Thank you for that info. Really good to know a bit about him.

Off to the paint shop this Thursday.

I found an advert in an old Cycling from April '89. A company in Sunderland named Pedal Sport advertising that they were the manufacturers of Ottadini and (I find this very interesting) Hill Special frames. Hill Special I'm sure ended up in Lancashire along with MKM after it closed in Harrogate. I hadn't remembered the Sunderland connection at all. Anyone remember this shop?

'For a short while in the late 1980s Jack, in partnership with Eddy McGourley, produced Hill Specials at Pedal Sport in Sunderland alongside the Ottadini brand.'

The Jack being Jack Wright of Middridge Engineering. So, if Colin Laing went back to the USA, did he sell the Ottadini brand name to Jack Wright when he left? And is the OP's bike a 'genuine' Laing frame or a Jack Wright era one?

I'm looking forward to seeing the end result, it's going to look very classy, I'm sure. Interested to hear about Cromaworks, too - I didn't know Field outsourced their paint jobs. They do lovely work (looks expensive, though!).
R

Just beautiful. It will turn a lot of heads when you're on the road I'm sure.
R

Dropped the frame off at Cromaworks and John was brilliant.
After initially looking at different colours schemes, assuming I would lose all the fork chrome, I am now keeping the same colour scheme.
John took a look at the forks and said I’d be able to keep a good 2/3rds of the chrome and he’s going to do a taper at the top of the fork in the same blue as the frame. To cover up the weld repair on the seat stays he’s also going to do a similar effect.
I’m really happy as I was initially drawn to that colour scheme.
I now just need to keep an eye out for a 7700 Dura ace front mech.
R

it’s been a while! Finally got the frame back from painting. Bit of a delay due to covid and him completing other jobs. I wasn’t in a rush especially with the winter weather.

I am blown away with the quality of the finish and he’s done an amazing job of painting the decals and keeping the chrome.
Now it’s time to build it! 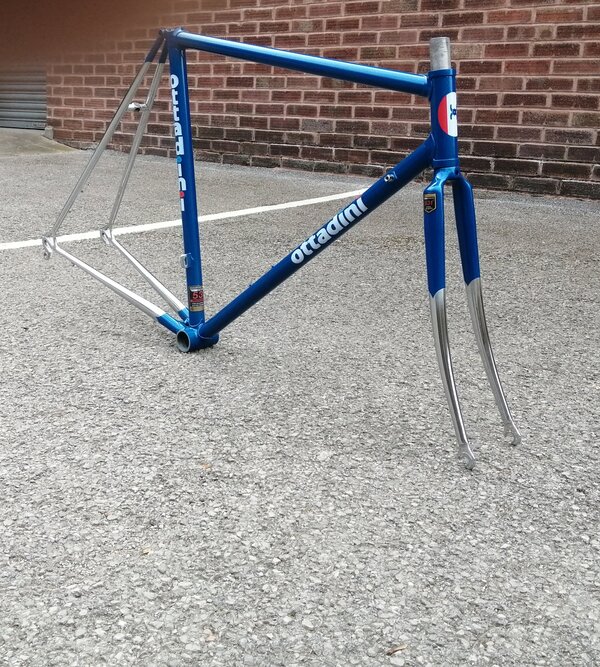 Super finish.
You must log in or register to reply here.