Some of you may have seen my wip thread for my little JMC replica here 95 S-Works and you may know that I've been on a bit of a mission to try and find, and visit as many of the filming locations from the film 'Dirt' as I can.

Well I went to visit the holy grail of dirt locations, and it's creator yesterday, the one, the only, Mr Pete Tomkins!!

Had the nod given from Tim at Bike Ninja as he had been in touch with Pete, regarding producing a line of clothing with the DCD logo on it, and I had half jokingly asked him to drop into conversation with Pete (if the chance arose) about my replica, and would he mind if I took it to his for some pictures.

He did, and Pete seemed pretty pleased at the idea, so said to Tim, to pass his email on to me, and for me to contact him!

So I duly messaged him and sent a pic of my bike with the memorial banner, and he replied saying he thought the bike looked ace, and would I be free this weekend to visit, cue me dancing about like an excited little kid and having to steel myself to reply, why yes Pete, I can easily be free on Saturday (I thought that sounded a little more grown up and sensible that 'do bears s##t in the woods haha)

So Saturday morning rolled around and I set off to casa de Tomkins, and when I arrived I think Pete must have been in the back of my van before I'd even got out!

And so followed an awesome few hours chatting about bikes, old videos and riders, and some of his cool looking upcoming products, and he gave me a good insight into how these things are produced/ what goes on behind the scenes before they could even make them too, all very interesting stuff, and it was so good of him to take time out to welcome me in and show me around.

Pete if you're reading this, thank you again so much, was a genuine pleasure to meet you!

Right now my drivvel has gone on long enough, pics I hear you all cry.....

Pete trying my replica out for size (he kept calling it Jason's bike, which was so cool to me)

The last time I saw this view, Jason was running down there after his bike after he had dismounted it, mid wheelie...

I think it's reasonably safe to say, he likes my bike..

I absolutely love this pic..

And once the sun had come back out, he couldn't resist taking her for a little rip down the garden... 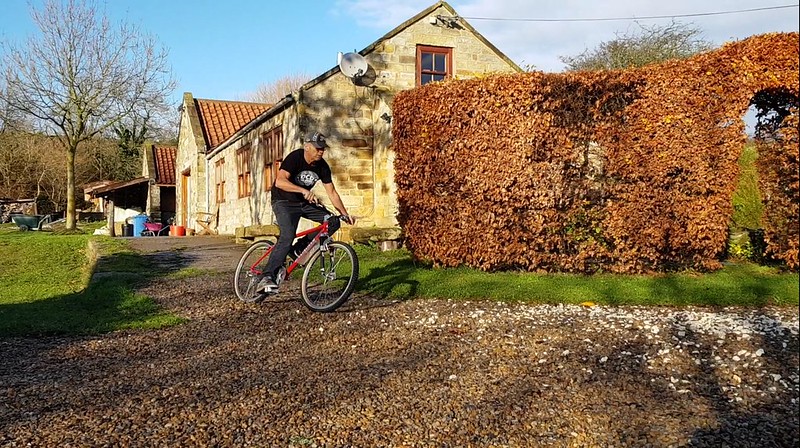 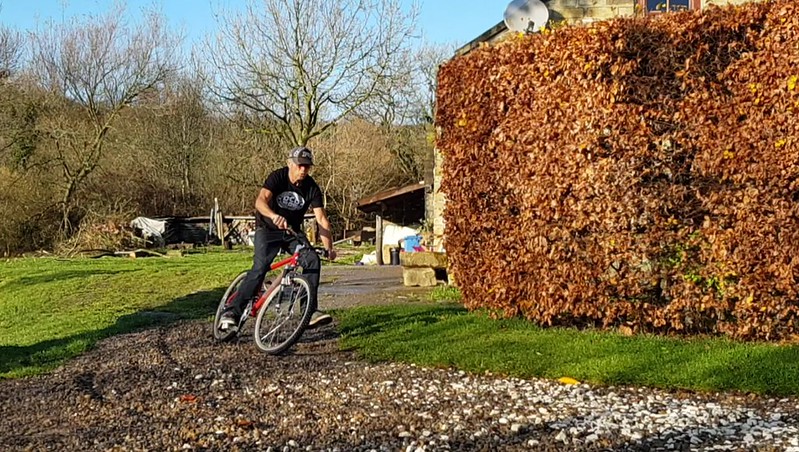 Apologies for the image quality of the last two pics, they're screenshots from a short video of Pete riding the bike!

And lastly, he even autographed my midsummer copy of mbuk, on the 'filming of dirt' article!

They do say, you should never meet your heroes, as you may be disappointed...

Well that's a load of rubbish in this case, you couldn't ask to meet anyone nicer, friendlier, nor willing to help out a total stranger with an odd childhood request, than Pete.

A properly nice bloke, I'm so glad to have met him, I think we both enjoyed yesterday as much as each other as it was a romantic bike ride down memory lane for Pete too, and I'm glad I gave him as much to smile about as he gave me, brilliant bloke and a fantastic day!
T

That is awesome, what a day.

nice one John, it's this sort of thing that makes retrobike and cycling as cool as it is. top effort dude

Great story, thanks for sharing.

Are you sure he knows its a replica!? :shock:

Soon you should be able to recreate the whole original film

What a nice guy.
J

The History Man":1hsuyo0r said:
What a nice guy.
Click to expand...

Yeah what an awesome dude!

And an awesome bike

Was an amazing day, and he said he got just as much enjoyme from it as I did, as it was really good to see such interest in his video, and his good friend, all these years later!

I'm so glad it happened, I'm still sitting here kind of half believing myself that I was actually there, keep having to look at my pics to convince myself that it happened haha!
Sounds silly but it's like that moment when you wake up, and your mind hasn't booted itself up, and you can't be sure of what day it is, or whether you should be getting up for work or not lol
Or I'm probably just crackers haha!!!
M

Great meeting you John, so cool to know that people are still appreciating DIRT. I put so much passion and heart into that vid, it’s without doubt one of my proudest achievements.
Dear Jason is gone but never forgotten. Immortalised by his own personality. His spirit rides with us on every trip.
Ride on!
You must log in or register to reply here.