Nice job.
Has given me some ideas for my 92 rebuild.
Thanks for posting this.

Cheers, champagne gold is what they called it officially, looks more like a shade of silver/grey to me. Part updates on the way, changing the stem to slightly shorter version back in the original red colour it came with, and a wider bar is on order since 580 just isn't comfortable for me. Also new grips with a red details

Yes I recall the champagne reference from catalogues or marketing.
I just got myself a 94 Team Issue frame this morning. My first Marin.

Nice one, good luck with the build, put up a thread 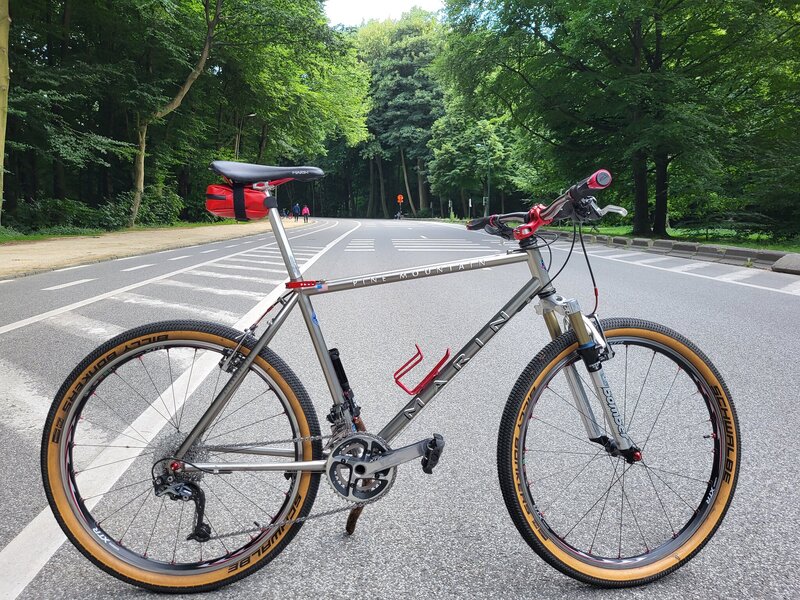 So here she is in her final form. Beautiful aint she.. Did a bit of mostly cosmetic work and bought some small part upgrades. The first of which is the quick release seatpost clamp, actually the 1993 and 1995 Marin range had this style but not the 1994 (probably a sourcing issue) so picked up this Marin clamp from one of the surrounding years, probably a 1995. So much easier to live with. 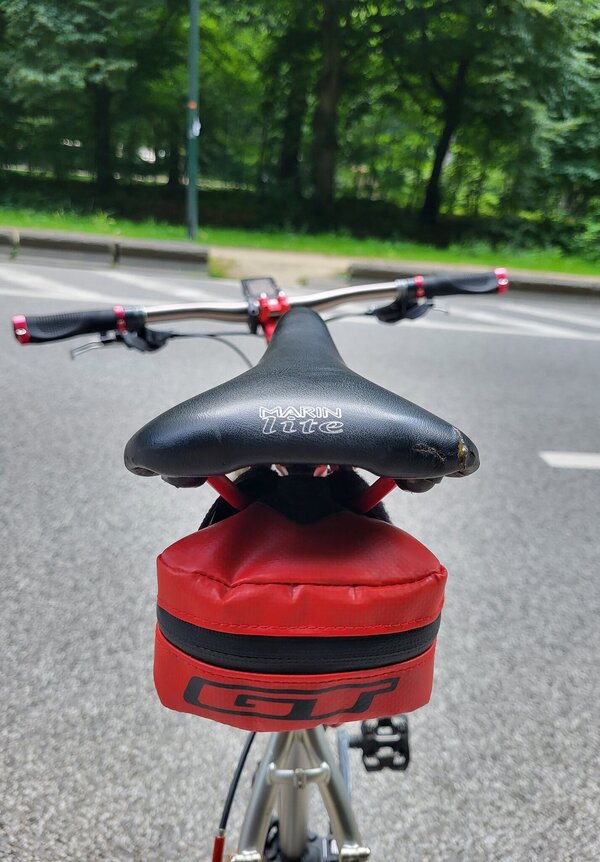 A banging GT saddle bag (in red of course) for carrying the essential inner tube + tools on a ride. I also glued the original Marin saddle with a flexible glue called Stormsure. Brilliant stuff, it will hold the tear togeather for many more years without being uncomfortable or splitting itself. I've fixed a few items including zips on a waterproof jacket using it and they are still good 5 years later, sets on exposure to water, or mositure in the air if given a few hours. 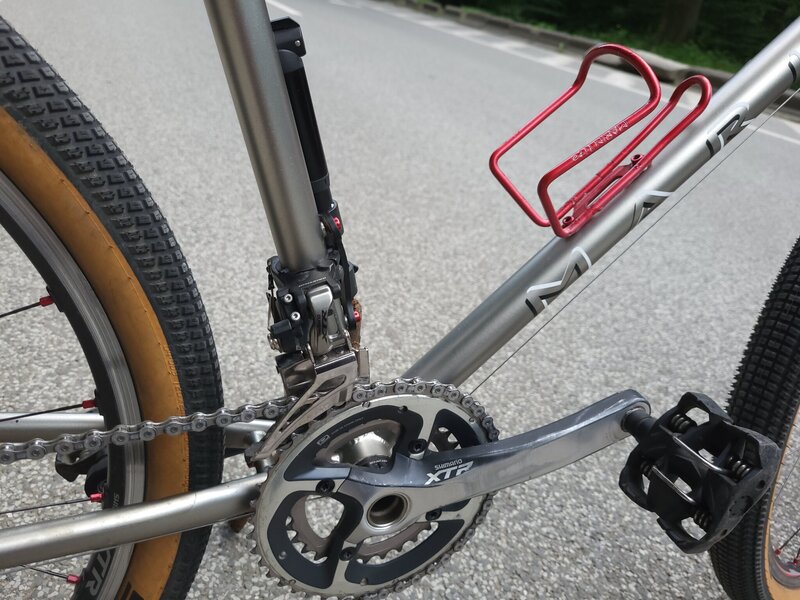 Here you can see the original Marlin light bottle cage back on the bike that I was able to aquire from @marinmike80. The frame was stripped back doing a competely cleaned and new decals applied, in a process I may not bother to post the pictures from, unless people are interested. 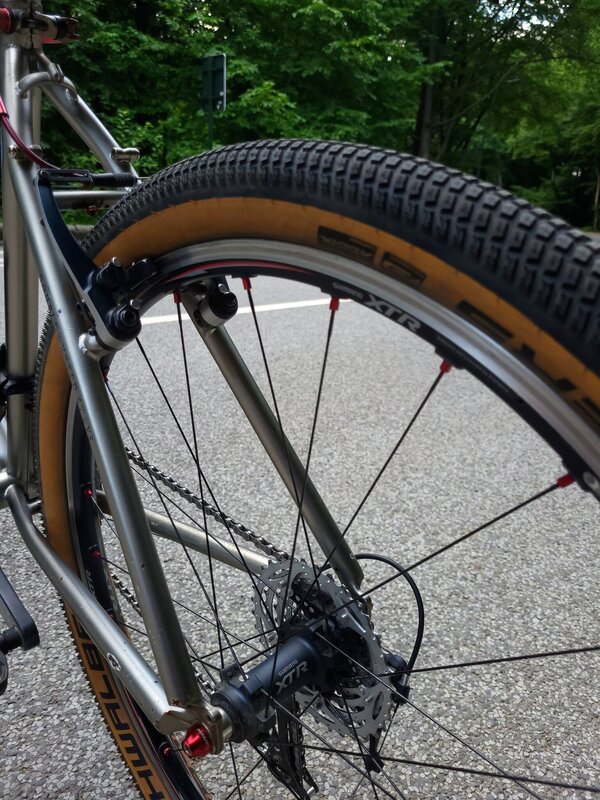 When the frame was stripped back the rust spots were treated with vinegar then WD40 and then rubbed with tin foil, while it doesn't bring that those areas to as a new finish, it improves it a lot and will hopefully slow the rusting process. The frame was clear coated to finish the job. 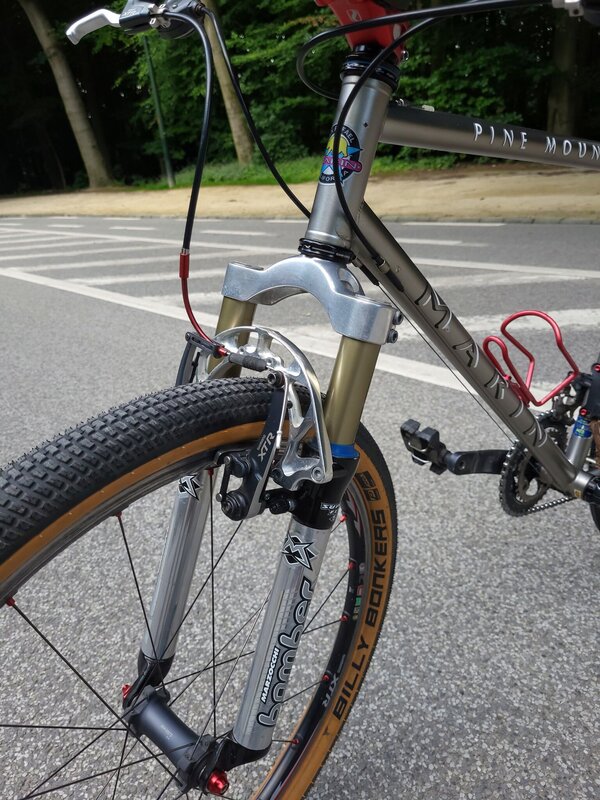 So the new headtube bage while not strictly period correct, they switched to this style of headtube badge from 1995 onwards, I just prefer it. The forks have turned out to be a bit of a pain, they leak air pretty badly so the seals need replaced and the valve to top up the air is in a stupid place so you have to remove the brakes to add air. I'm not surprised Marzocchi changed the design the next year, but these Super Fly forks are not easy to come by these days and they still work well (when they have air in them) and are crazy light for the time 1.5kg.. 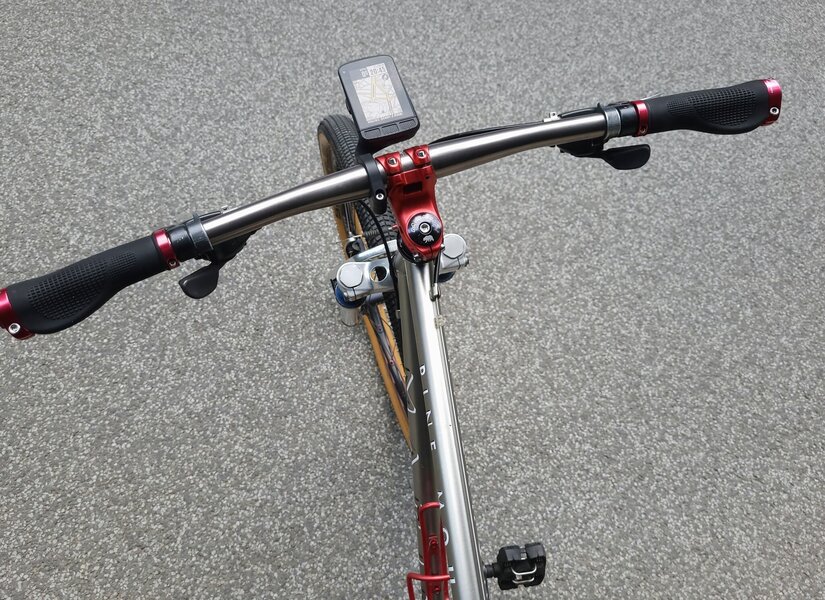 Also bought a stem cap MARIN with the Bear, love it, £3 well spent. The bar is a cheap aluminium of the brand UNO, the decals rubbed off in my hand... It's really hard to find decent modern width bars in silver, people keep asking me if it's titanium, its not, but it does give me the space I need to ride confidently and comfortably which is the most important thing. 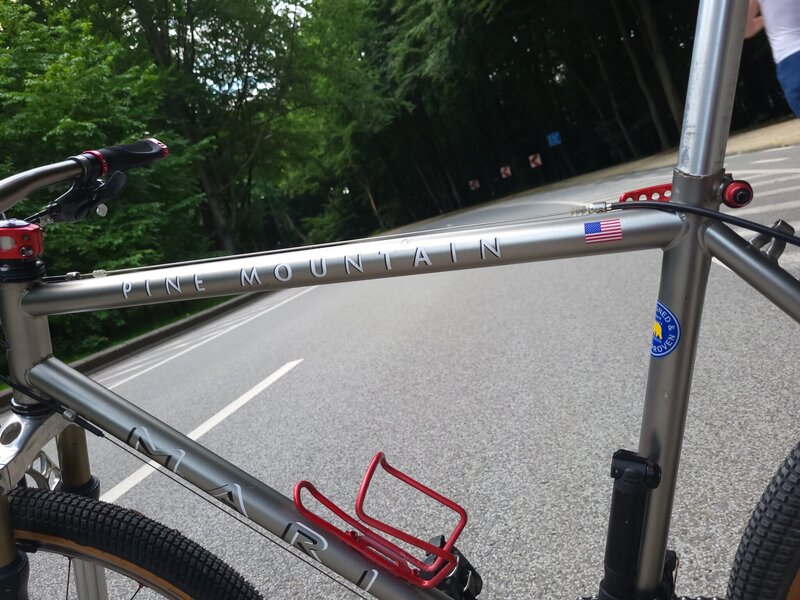 So now we come to perhaps the most controversial part, the name change. If you read the earlier of this thread you'll see that this frame was originally sold as an Eldridge Grade and that was the decals that originally came with it, they were peeling and damaged so I decided to replace them. Unfortunately, DN5 did not sell the Eldridge Grade decals from that year but he did have Pine Mountain. Upon doing a bit of research I found that for that year they were exactly the same frameset. In the factory they had one pile of high quality (but not very best, the Team issue takes that crown) steel framesets and attached the differing build kits and decals as needed. Since none of those differentiating parts are used on this bike, I don't actually even have them, I feel perfectly entitled to badge it a Pine Mountain. In fact it's arguably better than a Pine Mountain ever was, or in my eyes, ever has been.
Last edited: Tuesday at 21:44
You must log in or register to reply here.