All the cable guides seem to line up and tie-in really nicely with the b&w pic, only things I can’t see on the catalogue pic are the bottom downtube bottle cage mounts and for some reason the bottom pivot point? Would be great to find some high-res images… guess you’ll just have to continue to be patient and hope for some clearer pics for clarification! Great story though!

Headtubes match too, definitely able to make out the reinforcing rings 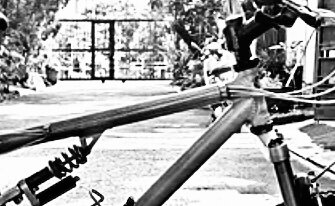 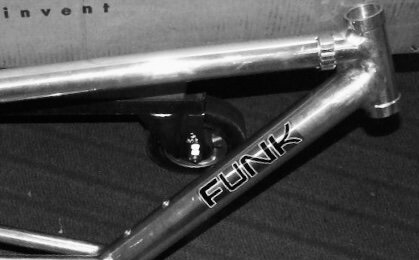 Smoothed out welds vs beads. But I think its a Funk.

I'd noticed the reinforcing collars but the catalogue says "titanium or steel front". However, like you I'm pretty sure it's Easton VariLite.

The pivot in the catalogue photo is frustratingly fuzzy but it's definitely different to the Jakarta bike - maybe this is due to material selection i.e. aluminium not titanium?

There's only one person who has the answers but I don't think my grainy photos were compelling enough for Daryl to engage. Better luck next time... In the meantime all we can do is speculate.

1. Where was it made – USA or outsourced? Part outsourced and assembled in the US?
2.Maybe it was made in Indonesia and has always been there? That would be a big departure but these were the final days of Funk, so I guess anything was possible.
3. Did Funk pay for a license to use the AMP patent? It looks like a Horst link, so I'm guessing that they did?

Made in the USA for sure

Well, if it drags on until next year, I'm planning on going back to visit friends at some point.

Now that it's been found, I'm seriously thinking about trying to buy it and ship it to the UK, so any help would be greatly appreciated.

A colleague at work is planning on going to Jakarta in the summer to visit family and has offered to help but I could do with a plan B if that falls through.

I'll check who amongst my friends is currently in Jakarta and whether they would be able to store it. I am not sure there are many though, as a lot of people I knew who worked there have moved back to working remotely from their home cities. If your other plan falls through, let me know - hopefully I could arrange something - I might be able to get someone to ship it if necessary, which I would trust more in this direction than sending stuff out there.

Kinda like a who did it murder mystery- only it’s a who made it mystery
You must log in or register to reply here.