This, I can say with a high degree of certainty is a Funk A.S.F and until yesterday the only image I’d ever seen was the grainy, black and white one in the 1994 Funk brochure and believe me I’ve been looking .

This isn’t a build thread! Although I would dearly love to add it to “the trunk of Funk” it might as well be on the moon as it’s somewhere in Jakarta…

I wasn’t sure where to post this but thought some of you might be interested as this is rare. What do you think? As you can see it's had some modifications over the years! I’m guessing that it’s the steel version as it’s painted? It reminds me of an AMP (B3?) but the swing arm pivot is different. Is there something similar on a different bike?

Any idea what A.S.F stands for? Is that shock an off the shelf item or is it bespoke? 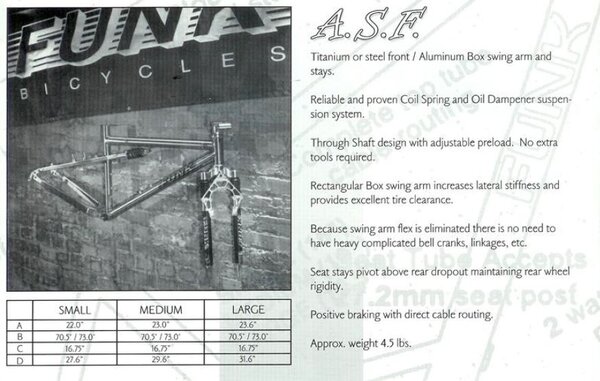 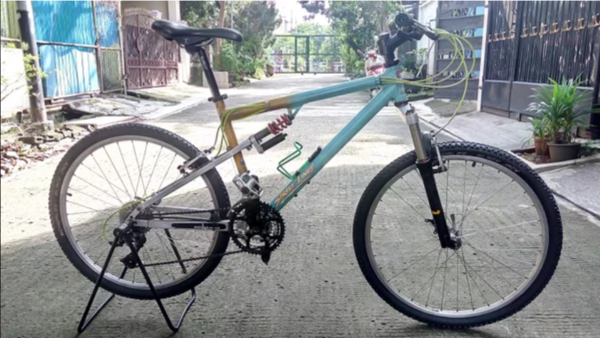 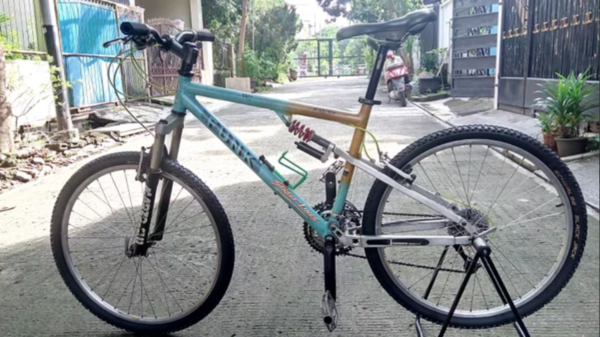 Looks like a mass-produced cheap Asian full suspension bike to me, tbh.
Nothing FUNKy..

You're right to be sceptical, but don’t you think the dropouts are the same as on my Force Gs? Along with the square sectioned swing arm/stays; I think that’s pretty compelling.

Decals can be replaced but Funk was a small/niche company, so you’d have to know you’re stuff and getting the font right just to make you’re bike look like something it’s not is quite a bit of work.

I wish I had better and more photos, but this is all I have. Frustratingly they’ve been heavily compressed as the resolution is shite when you zoom. 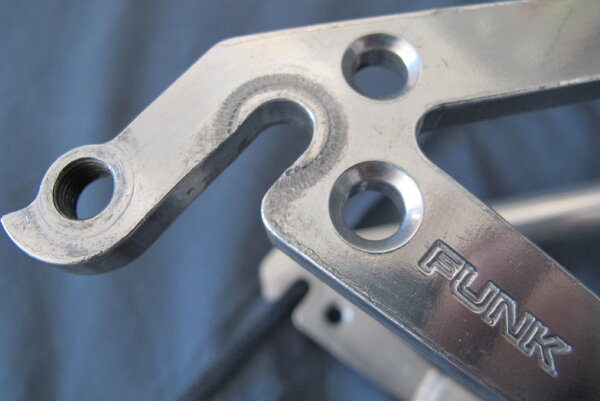 Is the bike in Jakarta for sale? Or just pics to show the bike off?

It was for sale but has been sold . The trader hasn't been active for a while but I've sent them a message anyway.

I've reached out to our Indonesian RB members for help as this is turning into a bit of a treasure hunt...

I managed to locate the street where these shots were taken but I'm not sure that helps! I also sent Daryl Funk an email asking for his thoughts as there are no reference photos of these bike to compare against. He might/might not respond but I'm crossing my fingers that he confirms my suspicions.

If any of you have any ideas how we might locate a 30 years old bike in a city of 10 million that's 10,000miles away and they speak a different language, please let me know!

I don't think "A Steel Front" works as they offered it in Titanium as well. What's about "All Suspension Funk"?
Last edited: Jul 5, 2021

Hopefully one of the Indonesian RB members can help. I have a few friends in Jakarta, speak reasonable Bahasa Indonesia and will probably be back there working sooner or later, so let me know if I can help out at any point.

That would be really helpful as my PM's are still sitting in my outbox.

The foliage doesn’t help but the green gate is the same and so are the gates (yellow arrow) at the side. Plants grow very quickly in the tropics but I think the photo is quite old. The trader first registered with Bukalapak in October 2015, so it could be really old! Promisingly there are only 47 feedback comments and they date all the way back to the start, so it could be that one of these buyers bought the bike. I’m tempted to ask each one… 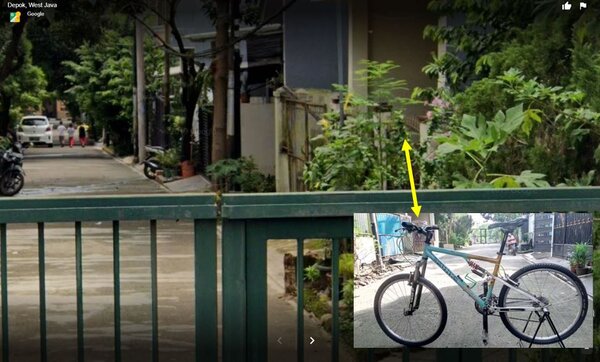 Wow, quite a bit has happened since I last posted on this thread but to summarise;

I messaged all the Indonesian RB members I could find – no response.

I emailed Funk asking if they could shed any light on these photos – no response.

I even messaged all the people who had left feedback on the trader’s auction site in the vain hope that one of them might have bought the bike and would be able to provide comment – nothing. So, I had no choice

but to pester, beleaguer and probably greatly annoy the trader into a response… If he ever reads this and translates it into Indonesian; I’m so sorry! But after three months he finally responded with a “still have it, OMG…” message.

At that time Jakarta was in full lockdown but naively I thought he’d quickly send me some shots and I’d be able to confirm (or not) that this was indeed what I thought it was. However, if the preceding months were anything to go by, I should have expected it to take a little more time.

Four more months rolled by and several more messages, but I still didn’t have any pictures. Finally in mid-October, I got sent probably the most useless photo for identification purposes but at least I knew at that point he still had it and I would just have to be patient.

After a bit more cajoling he sent me this on Saturday which isn’t great but it’s a vast improvement on the last photo. Looks like an exact match to me but we need more pictures to be able to confirm.

Hope it turns out to be what you want after you badgering the poor fellow into submission!

Hope it turns out to be what you want after you badgering the poor fellow into submission!

Ha! I did feel a little uncomfortable; up until the point when he told me he still had it...

I was hoping the drop out would have a stamp and it would be "case closed". However, the Force G from '93 didn't have a logo either, so we're going to need a second opinion. If I can get some more pictures over the next few weeks/months, I'll send them to Funk for verification. 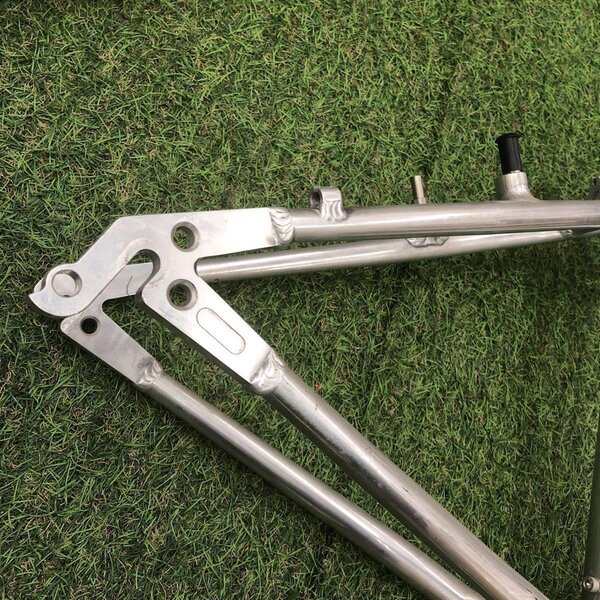