I have always liked the Clunkers coming around here every now and then.
It doesn't come more retro than that
I've been biking from '91, started on a cheap *ss Batavus and had a few after that.
About 8 years ago I got interested in the retro bikes after looking at some old pictures from the good old days.
From that moment I've had about 60 bikes, which led to a collection of 20 bikes.
The last few years I've sold most of them due to lack of time and space and because I needed the money because I got divorced.
But I always wanted to build a Clunker and when I saw a '40 DX frame for a nice BIN price and a shipping quote to the Netherlands that didn't make me broke, I didn't hesitate long.
After a few weeks waiting it arrived two weeks ago, and since then I've been collecting other parts.

It will be a Gary replica, with the inspiration from Alan's site: 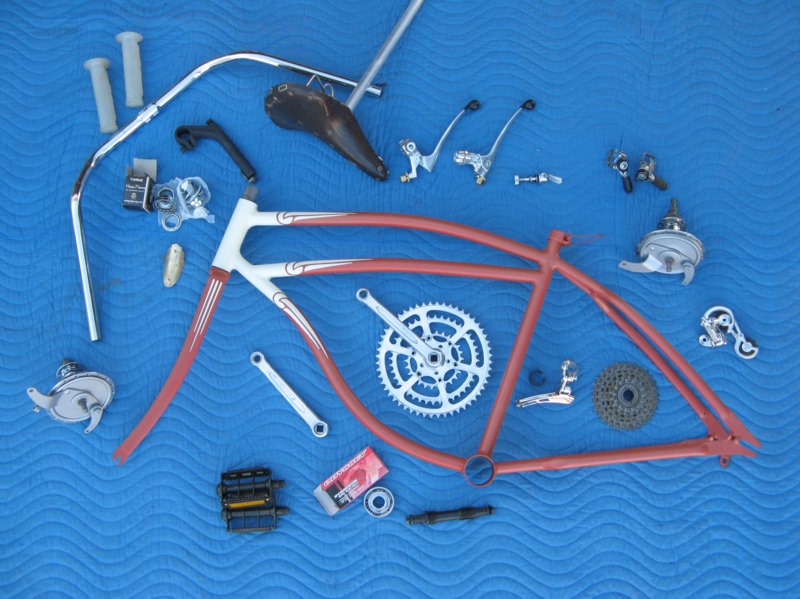 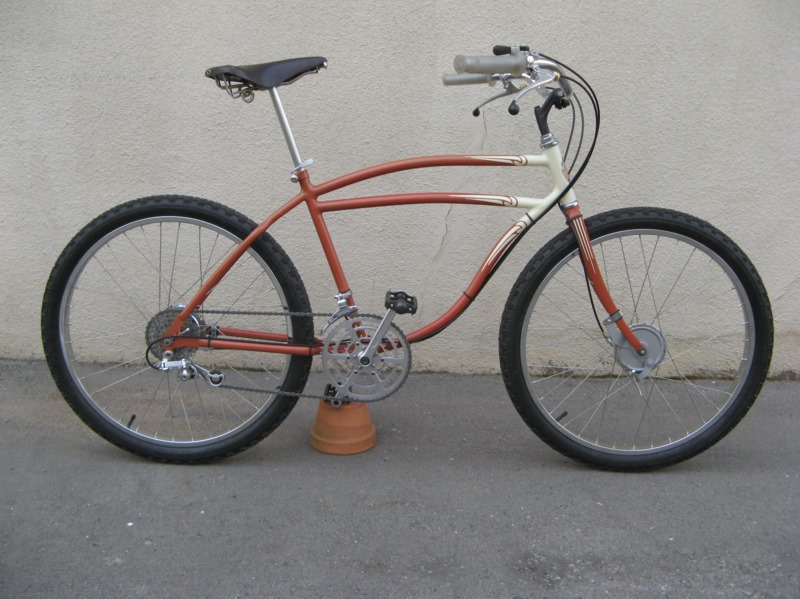 I hope you guys can help me with some of the parts I don't have and with some help for the questions I will have in the near future.
And offcource I hope you enjoy reading this topic.

This will be the speclist, I'll show a picture of the parts I have and update this post.

Frame
Schwinn Excelsior DX '40
It was pretty rusty when it arrived, but after a good cleaning the original paint appeared and it was in better shape then I expected.
The BB threads are in perfect shape and the seatpost came out without a fight, so I'm pleased
It needs a lot of ellbow grease to get the paint of and then to smooth the surface with some filler, but the basis is good! 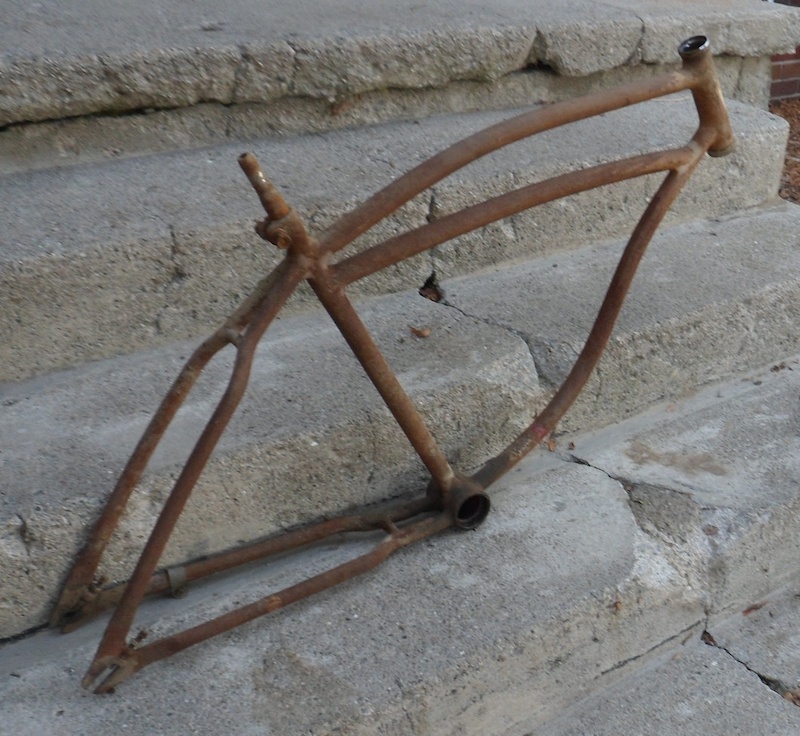 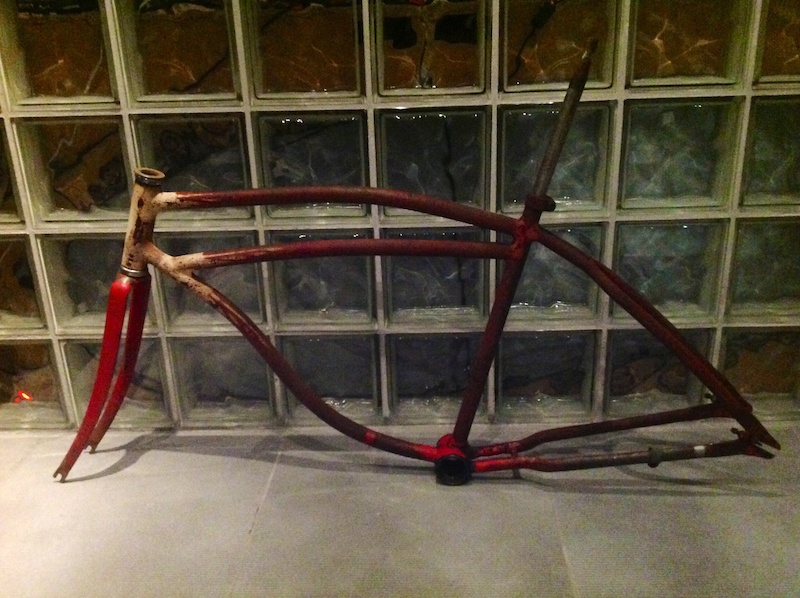 Forks
Schwinn DX '40
I recieved these last saterday (16-11), unfortunately the steerer is 1" to short...
Besides that in good condition 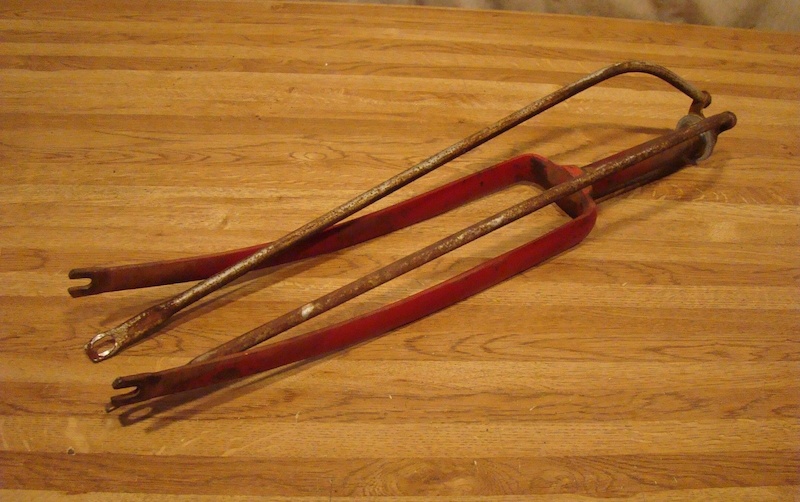 Headset
Tange 1” BMX style
Found me a NOS one 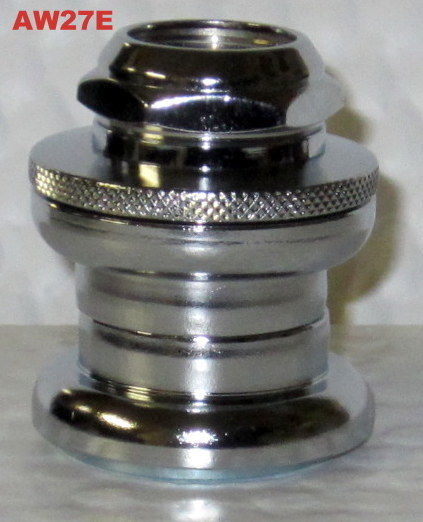 Wheels
Rims:
Schwinn S2
These are hard to find and pretty expensive, I keep on searching..

Tires
I don't know what type was used back in the days. 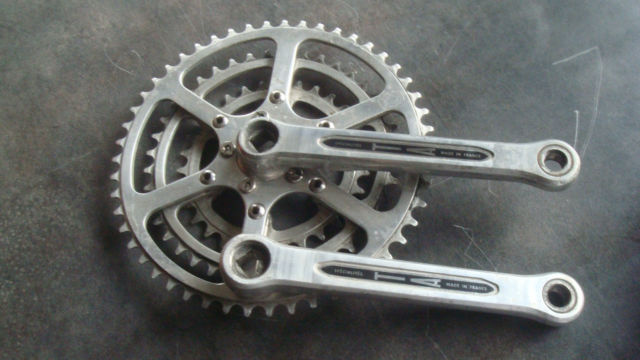 Pedals
KKT
Haven't found those yet

Shifters
Suntour Mighty
I need the adpaters, haven't found those yet. 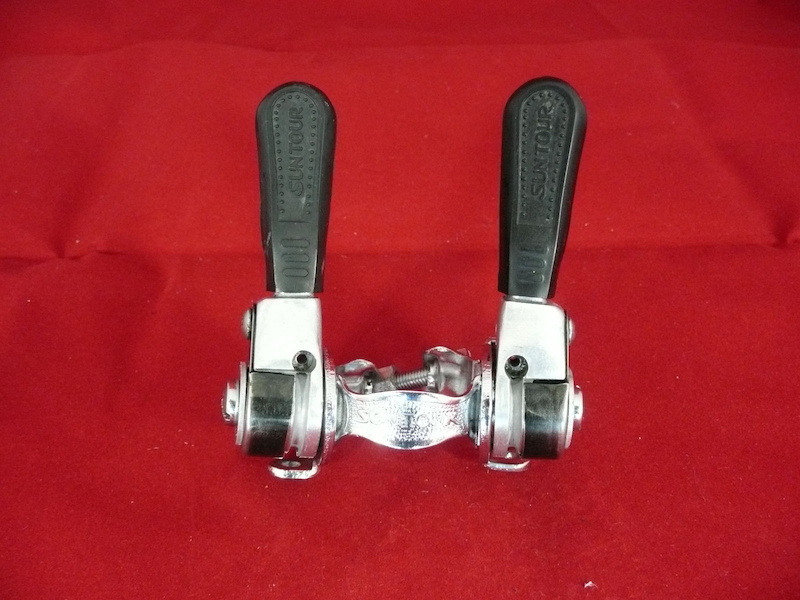 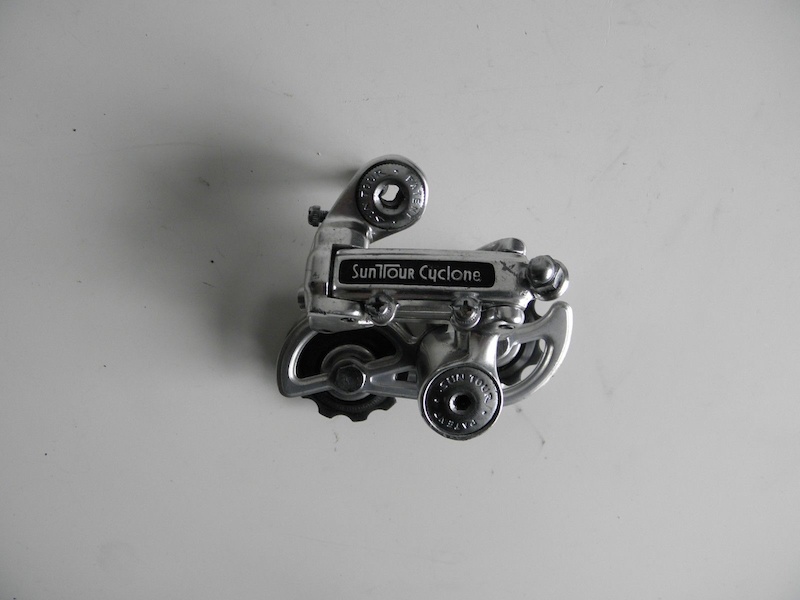 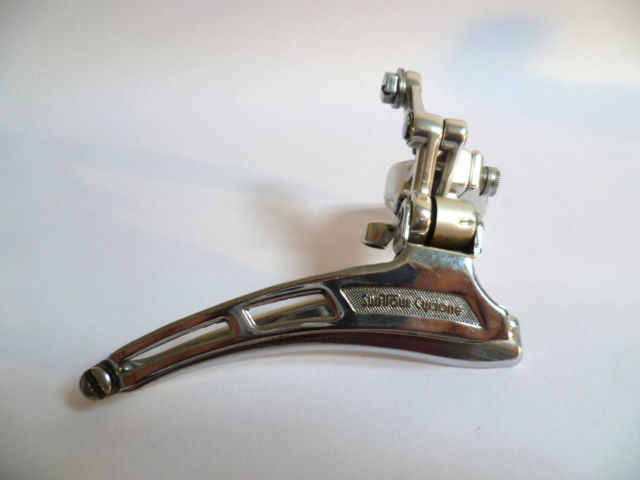 Stem
Gary had an Ashtabula, but they are way overpriced.
I got a simular one, with the Schwinn logo instead 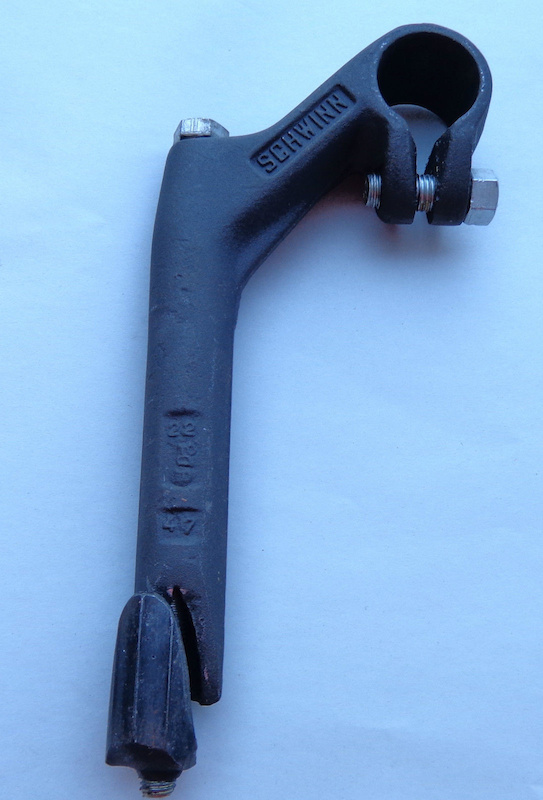 Brake levers
Honda 305 motorcycle
Got both left and right, need some polishing. 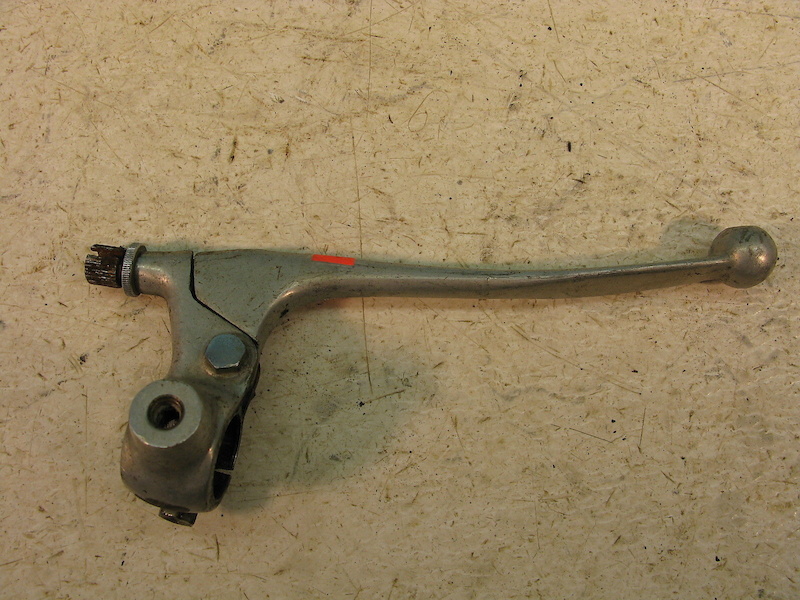 Handlebars
Wald Longhorn
Haven't searched for it yet

Zadel
Brooks B72
What a prices :shock:
Looking for a good deal

QR
Campagnolo
Haven't searched for it yet
J

Fantastic bikes! I can't help with parts i'm afraid but i'll be watching your thread closely!

great project! I am working on a very similar replica, but of his 37 model c version. (Pics to come)

To answer your question, the correct tires are 2.125 x 26 uniroyal "nobbys". You can get EXACT knock offs with the same tread pretty easily. They come on most new electra cruisers.


34henry3w":u7vshnl5 said:
great project! I am working on a very similar replica, but of his 37 model c version. (Pics to come)

To answer your question, the correct tires are 2.125 x 26 uniroyal "nobbys". You can get EXACT knock offs with the same tread pretty easily. They come on most new electra cruisers.
Click to expand...

I'd love to see some pics of your project, is that with the straight tube?
And thanks for the tip about the tires, those are pretty common, even the old ones.

Hey man I realized I shouldnt have high jacked your thread with my project...so I deleted the photos..I will make my own thread.

If you have any questions I have the entire history of "garys" bike figured out..so please pm me!

Great looking frame and finish!
And I want that badge!
What bike is in that museum and which museum is that?
R

hi
i'll be watching your progress as well.
building one also.
roy
D

I would encourage you to avoid the S2 Rims and find some first generation Ukai's or Araya 7X's to lace up. Steel is real but aluminum rims are so much better. Both of these rims were available by 79. 3 sets of Ukai's and one 7x:

Most of the early dudes purged their steel wheels when the Ukai's and Araya's became available in 26" by late 78. They remained the best/only choice in rims until there were more options in 84. As a collector of early Mtn. bikes, I tend to look for these constantly on the local CL.
You must log in or register to reply here.