Hello thanks for including me in the group. I have an old claud butler ( given to me 2nd hand in 1974. I’ve restored it twice over the years and about to embark on the 3rd restoration. In my old age I’ve become very interested in trying to identify how old the bike is. I’ve looked at various CB frame number forums but really struggling as my frame number doesn't appear to match up. The frame number ( under the bottom crank) is 1258290. Any help or guidance will be very welcome. ( I’ve attached a picture) Thank you in advance. Howard

Hello Howard & welcome to the forum, interesting conundrum as you are quite correct that the number doesn’t match with any CB numbering systems. There are a few possibilities; A the number might be a BB number rather than a frame number. B it might not be a Claud but instead be a shop built Holdsworthy C it might be something we’ve not seen before.
We’re going to need more photos and can you confirm the number stamped on the fork steerer matches?
Any more history might help…
I’m going to wake up @dwscrimshaw & @CBguy

I don't think its A, B or C, but D a CB number from 1958, Dec in this case. I am sure you have seen this before Peachy, this is a group Doug discovered and we have several in the database, this now being the highest number for that month.

Any more pics of the bike?

dwscrimshaw said:
I don't think its A, B or C, but D a CB number from 1958, Dec in this case. I am sure you have seen this before Peachy, this is a group Doug discovered and we have several in the database, this now being the highest number for that month.

I must confess they slipped my mind! Well done…
But yes I remember us discussing the possibility of Claud frames finished off or made up by Holdsworth before they introduced their own models in 1959.
For @CaptainH ’s benefit, here’s the theory;
Claud goes bust in Oct 1956, owing the inland revenue a lot of tax. A receiver is appointed & his assets (equipment, materials, built up & part built frames etc) get seized and stored whilst they try to find a buyer. The equipment & plant gets auctioned off in March 1957.
Holdsworth steps up in early 1958 & buys the rights to the name and picks up a bunch of materials & frames along with the deal. This is where our theory starts, because a bunch of Claud frames have appeared with a 1958 stamp with low numbers we are assuming these were made up & pushed on by Holdsworth.
The number is a bit odd as Claud would stamp his with the year then month rather than the other way around, also the frame count seams to be per month.
Hopefully this helps and we would still love to see more pictures.
Chris
Last edited: Aug 11, 2021
C

Thank you for your replies and assistance. I can’t find a number on the front forks ( is there a particular place I should look?)
Bike history:
I was given the bike 2nd hand for my birthday in 1974. My Dad bought it from a colleague who was a keen cyclist. It was fully original at that time, with original decals and CB Badge and a 10 speed racer with the cassette gear change lever on the bike frame but the crown wheel gear lever on the bottom of the seat stem. It had, had a good life when I got it although the frame paint was a sun faded (rustic) orange. The brakes and brake levers are original and handle bar stem. In 1976 I’d saved enough milk round money to have the frame re-stove enamelled yellow at Ellis Briggs in Shipley. Thank you very much, if you have any other questions please ask. I’ve attached some additional photos
Howard

Excellent thank you all very much indeed, very helpful and very interesting

The frame number would normally be duplicated on the the fork steerer, (the bit that is hidden inside the head tube) but I'm pretty confident in the advice above so you don't need to take it apart (unless you are planning on starting the restoration).
As for the photos, It has a Holdsworth version of the Claud head badge (Yellow ring top left) so that fits, as does the fork crown which is definitely a Holdsworth one (I've got the same detail on my top of the range 1962 Cordon Bleu) The rear bridge is also a Holdsworth curved version.
From those details I would hazard a guess at it not being a leftover Claud but one of Holdsworths new designs before they started their new numbering system in January 1959.
I'm pretty sure its a "Challange" see here the 1959 catalogue which was produced in November 1958. It has all the same details such as the underslung pump pegs and the side fitted cable guides that aren't on anything else that year. 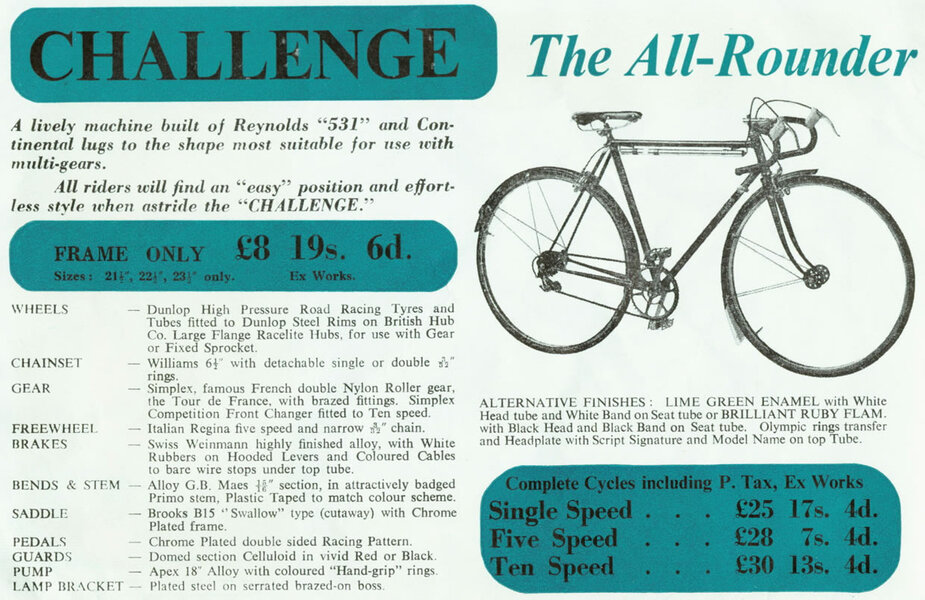 I've amended the Claud Butler ID thread accordingly.. https://www.retrobike.co.uk/threads/claud-butler-frame-number-identification.392124/
You must log in or register to reply here.