).... After lots of agonising and soul searching could I take 67 please

..... As for a nom, I would like to propose @KondratievsBike, I have had some good chats with him and although I haven't taken him up on it (yet) has offered to shuttle a frame from his to his local coaters as they don't accept postal frames anymore, so I hope this is a little paying it forward... I like the cone

Did make myself chuckle with that one.Was looking at the screen and the VLC media player icon (being a traffic cone) caught my eye

Couldn't find a traffic cone emoji,or anything that shouted 'Conan' at me so ice cream it was!
Yes,No.67 the Mavic 230 wheelset is yours! Haven't posted wheels for a while but I reckon £18 will cover it.Drop me a pm whenever you like.
Thanks for your contributions and nomination

I must admit,I've not noticed you before so feel free to tell us a little something about yourself/projects/site experiences,and let us know what you'd like from the Larder!

Orange 🍊 Fan
Back when we lived in Andalucia, Spain, I was called by the local donkey sanctuary to see if I could sort out there computer for them, I ended up staying the whole day, mucking out and fixing a fence, then going back with the whole family to carry on the work. Donkeys are lovely creatures, but they often get a raw deal. Good karma to you all.

Still a few members yet to answer the call,will give a shout out to them again shortly.In the meantime I have another nomination.
I bought a couple of small,special items from this person a few years back,XTR inline indicators and a Specialized 'Slug' rear shock protector.I do like something with a daft name,Specialized had some good ones over the years.Maybe we should have a thread of manufacturers' creative component names!
Some time after that I butted in on one of his sales threads,regarding pricing.I look back with a bit of embarrassment,should've wound my neck in.One of the drawbacks of having a big nose!

.If you can picture a skinned rabbit wearing a Time Trial helmet back to front,that's pretty much me!

Wasn't a huge faux pas but thankfully no offence was taken and no harm done.But it did serve as a reminder to me of the rule regarding not commenting on price.I get it now.After recently crossing paths on eBay I thought this would be a good opportunity to say thank you to this member for being gracious in his response to me.
So, @mezzanine ,if you'd like to take a look in the Larder,hopefully there's something that would be of use to you?
And if you have a nomination we'd love to hear it.Feel free to do so at your own leisure.Thanks for the parts and thanks for not pointing out I was being a bit of a dick!

Thank you Captaincowelly, first of all I've got to applaud the traditional, community vibe going on here, nice one. I had no idea I’d sold two items to you I had lost track as ebay can be quite anonymous but was sure our paths had crossed so there you go and no problem at all. I have never really introduced myself, mainly a lurker, semi regular depending on my obsession levels over the years. Thanks so much for the offer to look in the larder it's appreciated & would be a pleasure. I wasn’t sure on the rules of eligibility of this dynamic thread but I'm grateful to join in and hope this post fits in with a little about myself, some forum highlights & some bike pics thrown in.

So where to start... last week I asked for a little cheeky retrobike member discount for a part I was after from CaptainCowell as always better on here for that personal touch compared to ebay. Discovered myself and Captain have a few similar interests drawn to classic hardtails and specifically Specialized Stumpjumpers of the USA variety. My bike history started off with some shockers though. My first bike was the usual Halfords Apollo (Green & Purple Shimano Tourney SL-MY15 5-speed Thumb Shifters) then a Carrera Kraken (Cadillac esque) which really didn’t inspire off-road confidence so that ended up being a mile cruncher exploring country lanes, remember my CATEYE computer reading approx 1650 miles for the year or so which I proudly thought was a lot on a rather terrible bike. The bike excelled at skidding, mind you. I couldn’t quite believe what I had got myself into, I had spent £345 on it at the time (paying by instalments too as I was skint). One of my friends had a brand new XTR/XT equipped Specialized Stumpjumper while I was still paying off my Carrera Kraken which although I do believe a bike’s a bike I could see the difference in comparison and that’s when the bug of wanting well made, capable MTB’s took hold. I then got a decent red Rockhopper and from there the geekiness was set-in trying different bikes, groupsets, dabbling in the race scene etc. If I could only have one bike it has to be my Singlespeed early mid 90’s white GT I bought on Singletrackworld back in 2007, a simple bike all raggedy now but it’s still going and shows you don’t need to spend a fortune to enjoy a bike. Also like a rigid Saracen but the GT cuts the mustard as a go to daily bike.

A little mention of a post that I always remember on here, a wonderful collection of Flites from @Alex Creasey “Flites a plenty!” https://www.retrobike.co.uk/threads/flites-a-plenty-updated-18-12-11.130201/ at the time I thought “why?!” Years later I get it... 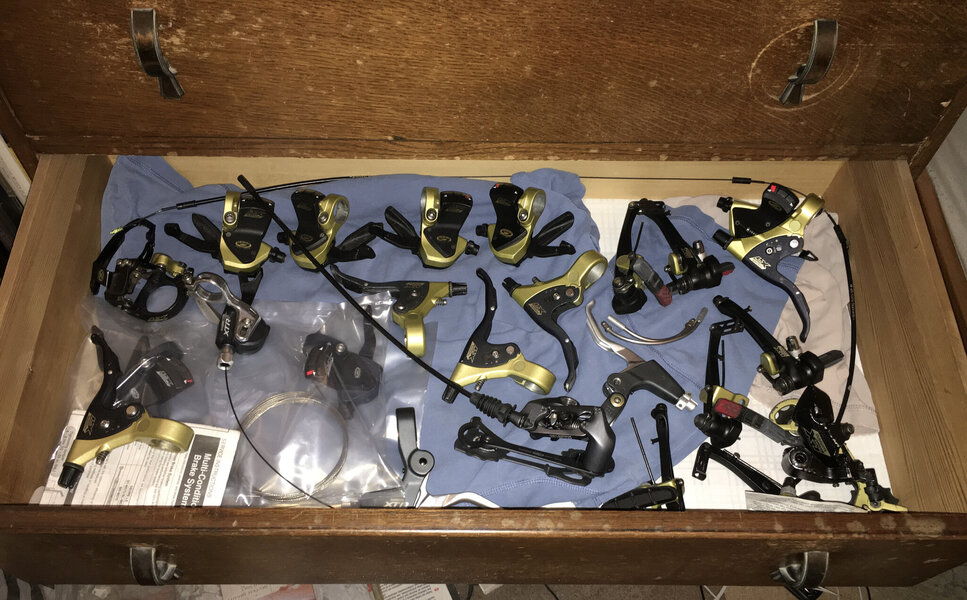 Thanks Captaincowelly for the kind permission to have a virtual rummage through your karma parts collection. After some consideration No.29 is a beauty, the BETD link for FSR 99-01 soild piece of engineering. One day I will build a FSR up but mainly I just can’t resist gold parts if they're on offer to enjoy! So Captain if you would be so kind may I please reserve the BETD link? It’ll come in handy worst case as a fancy paper weight Attached is a picture of my mates FSR and my Tracer taken a while ago, sorry not the best pic & unfortunately no longer have the red Intense. 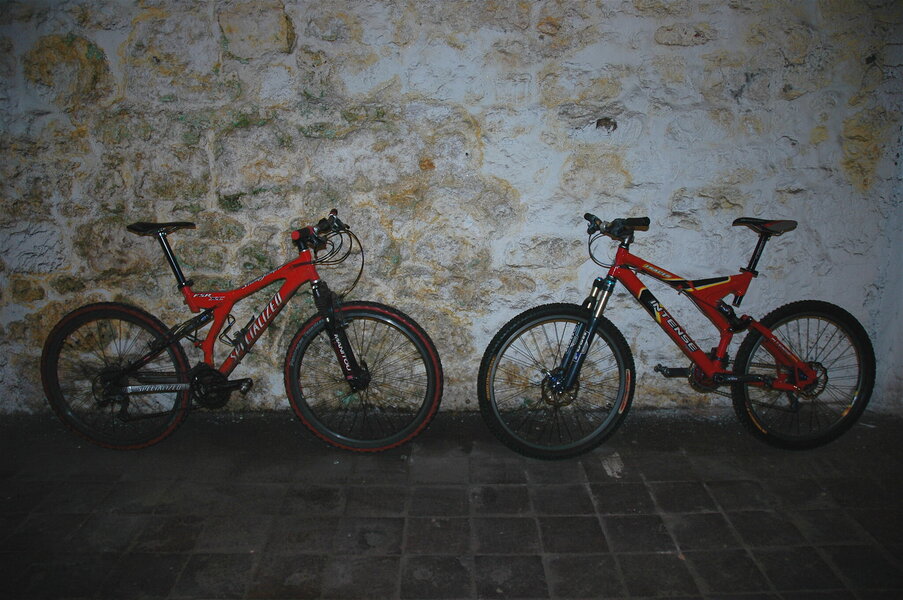 Dyna-ti thanks for sending a message when you saw something I was after (older Hope green trinkets) and I tried to return the favour if I saw some vintage Hope disc brake oddities that might be of interest. I do apologise though dyna-ti if you’re trying to de-clutter accumulated parts as I believe you had been clearing out some bits and pieces recently to invest in an e-bike but you never know so here’s my shout-out. 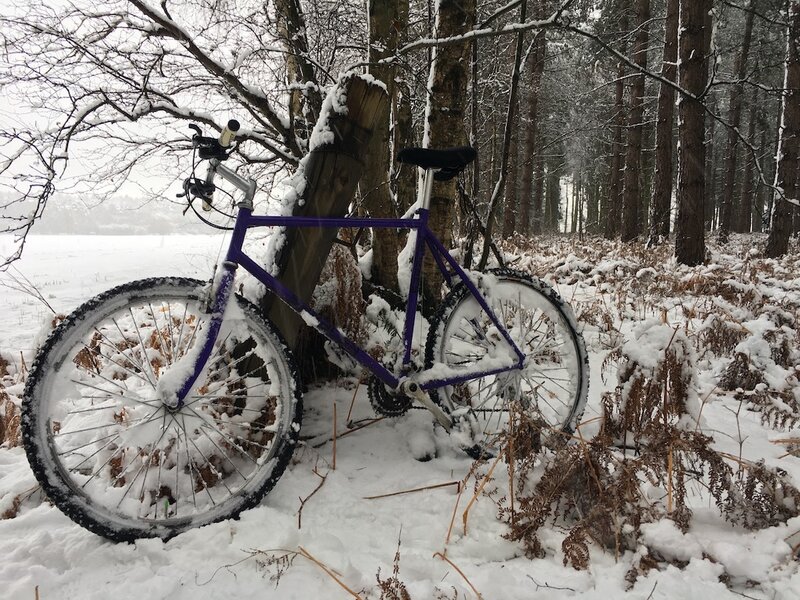 What a great post! Thanks @mezzanine ! I think you're probably the first to have ticked every box in one go,captured a bit of everything.I'm impressed.Really appreciate the time taken there,some great pics.Nice to hear a bit of history,I'm sure we all remember,with a smile,the transition to a 'proper' MTB.How does it feel to be out of the woodwork?

Thanks for resurrecting that thread,it's a corker!Retrobike's been around long enough to have it's own nostalgia.
Certainly deserving of the BETD link,nice bit of kit that.Will be a tenner posted,just for the record,but you already know that.Will be in the post tomorrow

Another worthy nominee too,I'm sure I've conversed/dealt with him somewhere along the line but couldn't find the evidence.I've a feeling he's helped more than one or two people out on the forum. @dyna-ti ,is there anything you'd like in there that's not too 'cluttery'?
'I can't believe it's not clutter!'?

mezzanine said:
Dyna-ti thanks for sending a message when you saw something I was after (older Hope green trinkets) and I tried to return the favour if I saw some vintage Hope disc brake oddities that might be of interest. I do apologise though dyna-ti if you’re trying to de-clutter accumulated parts as I believe you had been clearing out some bits and pieces recently to invest in an e-bike but you never know so here’s my shout-out.
Click to expand...

I thank you for your kind words, and offers, but I'm not needing anything currently,and i'm sure there are more deserving cases out there scouring(or about to) the threads in search of parts they are desperate for.
As to my Hope collection, I did indeed bite the bullet and shift the greater proportion of it via ebay, where it sold netting me close to £4k, though that is not to say It's all gone and I still have some choice parts, namely a pair of new bulbs,, a pair of new splined sports and some early mechanical calipers amongst the odds and ends.
As such, the Ebike has finally come to fruition, I picked it up on Saturday(8th) there and while only 3 days old, it is everything I hoped it would be. I opted for an All Mountain full suss 29er, rather than a shopping contraption. It is my first proper sus and my butt has been thanking me over the last few days. It's very well specced so I won't be looking to upgrade it for a little while yet.

Captaincowelly super no rush but thanks again and this was enjoyable adding some ramblings & context out there.

I should say reorganising our precious gems rather than “de-clutter”

. Dyna-ti congrats on the new Ebike sounds like an excellent choice & lots of fun, glad it worked out.

Well thanks for joining in Dyna-Ti!

I've also adopted 'catch and release' regarding the parts collection.Not always easy to let go but I'm sure you've created a great buzz along the way,maybe even completed a few builds/collections for others.
Sounds like the e-bike is going well too.I'm sure we'll all be appreciating them at some point.Imagine flying round the trails at 80 but still having the legs like you were 17 again.Or maybe they'll be remote control and we'll have a bunch of spotty care-workers racing our saggy carcasses round the trail centres like a dribbly Scalextric?
If you're really sure there's nothing you could use,would you like to give us a nomination?I'm sure,in the years you've been here,there must be a tale or two,bit of Retrobike magic,someone you'd like to have a go?Feel free to post a pic of the bike too.Unless it's gone out for a ride on it's own.Can they do that?

mezzanine said:
Captaincowelly super no rush but thanks again and this was enjoyable adding some ramblings & context out there.

I should say reorganising our precious gems rather than “de-clutter”

. Dyna-ti congrats on the new Ebike sounds like an excellent choice & lots of fun, glad it worked out.
Click to expand...

I reckon Yumey 'ave a problem.