Canti brake bosses missing - what do I need?

Carge said:
But I put it to you - that if your frame arrived without bolts and sleeves - then the bosses are a worthwhile option.
Click to expand...

Bontrager frames (and forks) were unique. They used a sleeve and a longer bolt that threaded into the base part of the boss that you see in your photo. (In other words, nothing is wrong or missing, but people often misplace those sleeves.) Your sleeve stayed in the tri-algn brakes, hopefully you still have them.

You might need a longer bolt for use with the V brakes though, because they likely won't have the deep recess that Tri Aligns have - make sure it's long enough to extend fully into the boss threads!!! The ones that come with V-brakes often aren't adequately long, in which case you'll have to source some basic hex socket screws and some small-diameter washers to replace whatever proprietary bolt hardware that came with the brake. This was common.

If the single spring hole doesn't give you adequate spring tension, you'll need better v-brakes that have a tension-adjuster screw. (Or better cantis that have infinite tension adjustment like the tri-aligns did.)

If this all seems frustrating and atypical for no reason, remember to keep it in perspective: "Standards" were still being created, and Keith Bontrager was responsible for more of the ones that stuck than anybody else. A few, like this brake mounting system, were bound to be dismissed even if they were technically or structurally superior, because they were more expensive. Those linear-pull V brakes you want to use, and which didn't exist when your frame was built, were eventually invented by Keith too!

If you don't find the parts you need to make this work, let me know and I can probably take some pictures.

Also... though it probably goes without saying, PLEASE don't cut the cable hanger off of the rear wishbone stay! ;-)
I

Oops. All the prior replys weren't appearing in my browser due to some glitch with the new forum format. Looks like question was already answered and my reply was unnecessary, but offer still stands if you need photos.

In case anyone ever needs it...here are the dimensions of the Bontrager brake sleeve.
Taken from the originals fitted to a Racelite. Plated steel, not aluminium. 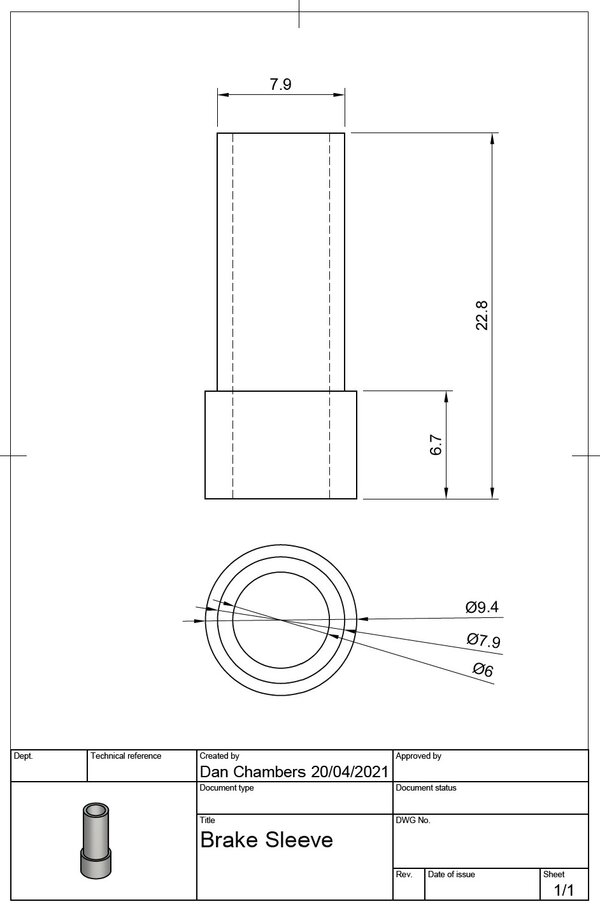 Altek V-brakes..what am I missing?