Well, I managed to finish a lot of work commitments by late Thursday night, so threw the riding kit in the wagon and loaded the BfEMax at 6am...on the road to Brighton at 6.05. I love seeing the long vista of the South Downs as I drive over the hill at the end of the M23 - '....blue remembered hills...'....

Coffee and breakfast at 8:30 with Ant, some work calls, and then past the National Park sign and into Stanmer Woods for some fast singletrack. After terrifying myself on the wet roots, I managed to get the right tyre pressure on the new Schwalbe Hand Dampf up front, the tyre still performing below par until the new shiny rubber was worn to grippy matt surface.

Lots of singletrack, including the steep drop between trees into the hidden valley parallel to St Mary's Farm, and plenty of long haul climbing. Fast gravel on the top of the Downs, combined with really fast descents on narrow, flint-strewn, rutted bridleway. Three hours in all...enough to be able to compare the BfeMax with the Staton Switch9er Ti and many other things...

As I mentioned in the earlier thread, the Longshot geometry makes this a roomy bike. I am on the Small, at 5 foot 7 tall, with 31 inch inside leg. A reach of 438mm still feels more like the 450mm of the Medium Transitions and 16.5 inch Stantons. This makes it both roomy and chuckable. At 28lbs it's two pounds heavier than the Stanton ti, but not as heavy as some iron hardtails, or even some alloy enduro bikes. I immediately felt the extra weight when bunny hopping over ruts and logs. But it took no time at all to adjust, and soon I was not thinking about the extra heft I needed to get the front wheel up and over obstacles and to get the bike airborne over cow poo, branches and ruts.

On all surfaces and gradients, the BfE just seems so planted. Rut anxiety is huge on the South Downs - realising the rut which you have committed to is suddenly becoming an increasingly deep chasm which needs urgent exit. On a 26 inch wheel this often results in a sideways wheel jam and a rapid 'off'. On 27.5 hoops it becomes less of a risk, but is still a lottery. With a 29er like the Bfe, possessing a slacker-than-DH 63 deg head angle, it's no sweat. Just turn and lift and whoosh you are out. I was out-rolling Ant on his 27.5 wheels instantly on descents, the usual 'my this bike is running away.......' kicking in.

The Cotic is surprisingly different to the Stanton. The Stanton's tiny rear triangle tucks the rear wheel right underneath you, and it turns into berms and between trees in an instant - switching direction is done before you even think consciously about it. The BfE is MUCH longer, and it took more body English to get the same rhythm into single track. It's not sluggish or slow in any way at all, it's just that the long, rangy chain stays makes the bike less of a 'breath on it and it turns' kind of frame. Again, it only took a few minutes to get used to, and then with the X-Fusion dropper slammed the bike was as flickable as anything I have ridden.

Hauling uphill, the two pounds of extra girth was noticeable, but the Stanton always feels like a cheat, since it waltzes up with so little effort. Oh...and it costs four times more than the Bfe...But my, those longer chain stays makes the BfE a sterling climber regarding grip and capability. It's a 'sit in the saddle and grind' machine in the best way, like the Speed Balanced Geometry Transitions. it's hugely capable on reference climbs, and with far less front end wander than the Stanton, despite the crazy-slack 63 head angle (more on that in a minute). Up and up the steeps, just dig in and up we go. I am running 30 at the front, 10sp with a 40 tooth Hope range expander. Perfectly fine for the Downs, even the short sharp ascents in the woods, which have most people off and walking. The climbing sweet spot is huge on the BfE - some bikes have a tiny window where the front wheel doesn't lift and the traction stays at the rear. Not so the Cotic....plenty of room to roam around on the bike and keep firmly planted at both ends.

Now...head angle. My ancient 26er Orange Alpine 160 is still in service, and that has an excellent facility for using a shock mount slider to slacken the head angle and lower the bb. The moment I had it I experimented with angles; in no time at all I ran it full time in the slackest (65deg) position, which helped hugely on the steep and deep in the Alps. It woke me up to the long low and slack movement, and to the (then) experimental British hardtail scene. Roll on a decade, the semi-insane Grim Donut experiment by Mike Levy showed that there’s a lot to be played with in terms of slacker head angles and steeper seat angles. The BfE Max has a frame angle of 63, but this translates into a real-life angle when choice of fork length is taken into account, along with sag. The geometry chart on the Cotic website is excellent, and as you move through 120 to 160 as unsagged fork length on the chart it will give you the change in estimated sagged head angle. Thoughtful. Helpful. Accurate. So with me running roughly 150 unsagged, I am getting around a 64.5 head angle. This would have been firmly in downhill territory a few years ago but now is leading edge enduro - and common amongst leading specialist hardtails and fs such as Transition. Combined with 35mm stem and short offset forks (42mm or so) this gives that magical ‘synergy’ to the handling. OK...I hear everyone say...nothing wrong with the 120 stem and 70deg angle on my retro steed...BUT...as I push fast over an unfamiliar 1m drop, it’s nice to be able see quite a lot of wheel in front of me as I come back to earth, and with the attack angle of the 29 inch wheels and slack head angle to feel the bike lift over that huge root rather than crash into it...As I mentioned in the other geometry thread, when I get on a retrobike I really do think ‘...where the hell has the front wheel gone!!!...’

The BfE Max still prefers a small front wheel pull and lift to get over the biggest roots and up rooty steps - the 438mm reach makes this easy and uneventful. The back follows with no fuss - and I realise that on some bikes you have a sense that the front handles things and then the rear crashes into them - almost like the front end and back end of the bike were entirely separate things. Not so the Cotic; the rear follows the front without any fuss or fighting. Hup over that huge step and no thought about the back, that'll do its thing...just think about the next tricky set of roots.... It's a lithe, intuitive bike. Nice.

But then we directed the bikes to the mangled bridleways heading steeply downward - rain channel ruts running like a snake down the path, flints gathered in piles every few metres, and banked, undulating green-hued chalk. Micro-route skills are essential in such contexts, but even then the transitions from left to right, dodging this and aiming for that, can feel like a game of Russian Roulette. This is where the BfE brings the broadest smile to my face. It descends with incredible certainty and aplomb. A kind of '...right....let's GOOOOO.....' sort of confidence. Or like Hans S pressing 'jump to light speed' on the Millennium Falcon. OK, so I have set up the front end really carefully - overforked Lyric but run with low pressure to give 150 of plush travel. But it's not the fork which is the key here, it's the frame....and what a frame it is... It's not the 'point and crash on through' of the older, heavy downhill rigs, it's light, controllable certainty. No front end washout, no sense of being thrown around by impacts, never a passenger always the pilot. It's just great. Fast. Very fast. Good job I have a quad-pot Hope stopper up front, with a 203 disc - since quickly scrubbing off some speed becomes quite a necessity at times. The day begins to turn into a mile-munching excursion as we take downhill sections at speeds well in excess of our normal rate and that 'wow...let's do more' feeling of euphoria fills the air. This all on sections I have ridden dozens, if not hundreds of times. The last section of singletrack passes in an instant and we're heading back along the cinder track to lunch.

This is a no-brain purchase. An incredibly sorted steel hardtail. I have heard that people say the BfE beats you up. Not at all with this latest incarnation. That long, long 853 downtube and ovalised top tube works wonders to produce a frame which is compliant in all the right modes, and stiff in the directions it should be stiff. My alloy Ragley mmmmBop beats me up far more - a kind of incessant hammering in the spine which has taken me to a carbon post and plush WTB armchair saddle. Not so the Cotic, it has that steel pizzazz and forgiveness which the SOUL had as its ... er ...soul.

The spirit of KB's Bontragers surely indeed lives in these Cotics....

Quite want to try one. Their demo days were great, was blown away with the first ride I had on the solaris max in 2018 (?) And the soul which I thought was OK (the last one before they sitched it)

Am looking for a 29er but had discounted the bfe max on the basis of its weight. Good to hear you are liking it so much. Build does look ace

Coomber - here is photo of my specific build...the one above is a stock photo since I was tapping away on my iPad without access to this photo....

Note the 'parts bin' aesthetic ... have had to go with what's available rather than carefully match colour ways.... 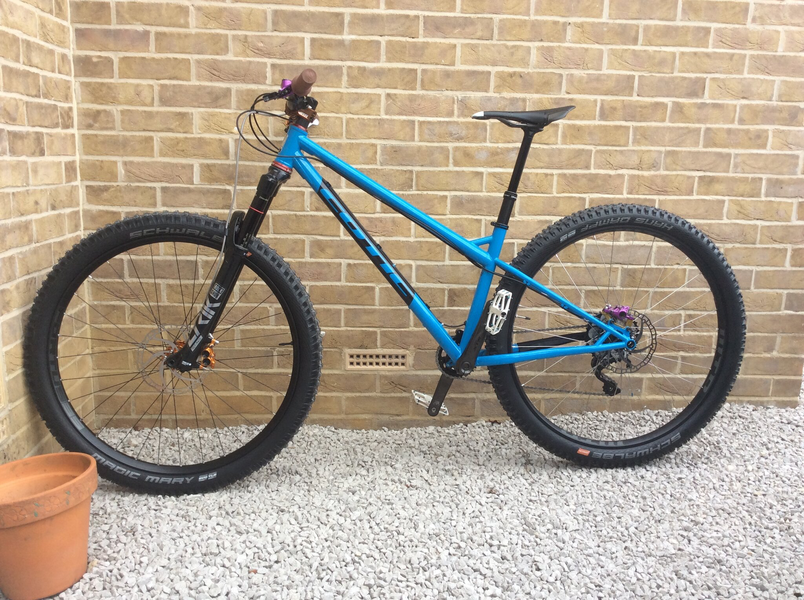 Now with added head angle … or rather here’s more text on head angle....The 2021 BfE Max has a 63 deg static head angle, equating to around 64.5 for a 150 sagged fork. That’s slack. It’s also jolly good. What’s interesting is wander and flop. Wander & Flop are not a pair of new detectives or accountants. Wandering floppy steering on climbs has been the bane of the new geometry bikes. You hit the steep stuff and it can impossible to keep on top of the steering, which seems to have a life of its own. The BfE has a very slack head angle, yet very little wander and flop. Is this the stem? Nope. Standard 35mm stem. Is it the fork offset? Nope. That’s the same short offset which a number of bikes now have. I think it’s something interesting....the rear triangle affecting the front end. The long chainstays on the BfE affect the steering on climbs. Yes, they slow the handling a bit in singletrack, but not so much as to be an annoyance or a problem. But on steep climbs they calm the bike right down. The alchemy of geometry is Very Interesting....gold can be extracted from steel.....
Last edited: Sep 3, 2021
You must log in or register to reply here.

Are we nearly there yet? (More geometry nonsense)
2