So, thanks to some gentle prodding from Peachy in the PM's, I've decided to start my very own build thread...

Bear with me, and go easy! This first post is probably going to go on for a bit...

1994 and 1995 were both important years for me, and not much was more impactful during that time than MBUK, Mint Sauce and Dirt.

Well, maybe Pure Phase and What's The Story (Morning Glory), but I digress...

We'd watch Dirt every afternoon after school and I'd bomb my paper round as fast I could on my Halfords-bought Saracen, so that my friends and I could head up to The Rock before it got dark.

Llanymynech Rock is an old, disused limestone quarry with a golf course on top. It was an amazing place to spend your childhood camping, building fires, walking dogs and riding bikes. My village was at the bottom and I began to spend all my spare time bombing its hills, woods and trails on my bike.

Eventually the Saracen became a secondhand GT Timberline, and I spent what little money I could get on whatever took my eye at the LBS in town. Nothing too fancy, but that didn't stop me pawing through MBUK every month; sending off for catalogs in the mail and dreaming of a fully specced-out Orange P7, Kona Hei Hei, or (having watched and obsessed over Dirt hundreds of times), a bright red Specialized M2, ala JMC.

Eventually skateboarding replaced bikes in my latter teens, and I'm ashamed to say I never owned another bike after that Timberline. Not even a commuter, or a pub bike. Nothing.

Eventually my parents left that part of the country at the same time I went to University, and I spent the next two decades and all of my adulthood in sprawling cities rather than the deep countryside of my youth. Moving to the US in 2005, I spent the next 15 years in New York until work took me to LA a little under 18 months ago.

Just in time for a global pandemic!

And then, sitting around on my arse for 6 months, I got to reminiscing with an old friend about growing up mountain biking (no cool race stories from me; no shop sponsorship, or trips anywhere spectacular; just kids bombing around our little corner of the world, hitting up woodland trails and single track across Shropshire and North Wales). He'd just finished building up an old bike for himself, and it suddenly sounded really good to me; the ideal 2021 project. LA is perfect for riding a bike; there are trails everywhere, mountains nearby, and the weather is good all of the time.

So I started re-watching Dirt; cruising Craigslist and eBay, and then I stumbled across this place. Suddenly, I was where a lot of you have been, I suppose: obsessing over all the bike-related things I coveted when I was young that I couldn't afford; daydreaming of the bike that might have been but never was!

I still couldn't afford that bike, of course. But, bit-by-bit, if I was patient, or stupid; a paycheck here; a paycheck there, maybe I could build something like I always wanted?

Starting from scratch (no parts; no tools; no workshop; no space) I didn't want to go too crazy. But I came across a frame in decent shape, at a reasonable price, on eBay. And figuring once I had it, I'd be too ashamed of wasting the money not to follow through, I bought myself a red S-Works M2 from 1994... 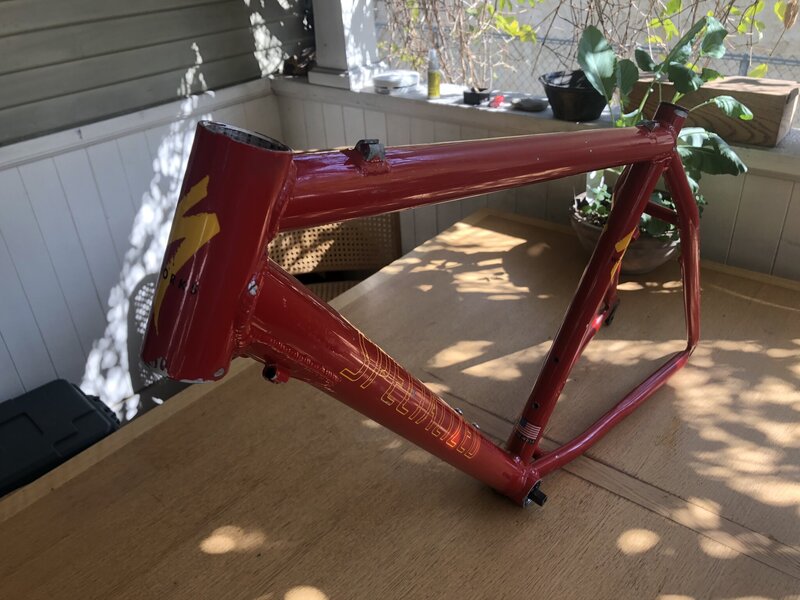 No cracks; no dents. Just same major chain suck and fair few dings to the paintwork dotted about.

Even the bottom bracket it came with seemed to be in pretty decent shape!

The decals were all OK, and as this was a first build, and the plan was to ride her, I spent no time at all deciding to keep the paint as-is. I'd match some nail polish and neaten her up as best I could eventually (more on that later); give her a good polish, but that was about it.

Anyway, before I get to my first few purchases, I thought it was worth pausing to discuss my plans:

Period correct, give or take a few years either side (one or two major exceptions aside). No NOS required, unless fluked upon for cheap. Just nice bits, in decent shape. Nothing too fancy; nothing too boring. I wanted the final spec to represent what I've always liked best about bikes: a machine made up of personal preferences, with parts added little-by-little over time to the rider's individual tastes.

That said, I had two major and obvious sources of inspiration for this build:

The JMC '95 version of the bike, as seen in Dirt and in Spudly's excellent and inspirational replica build thread: 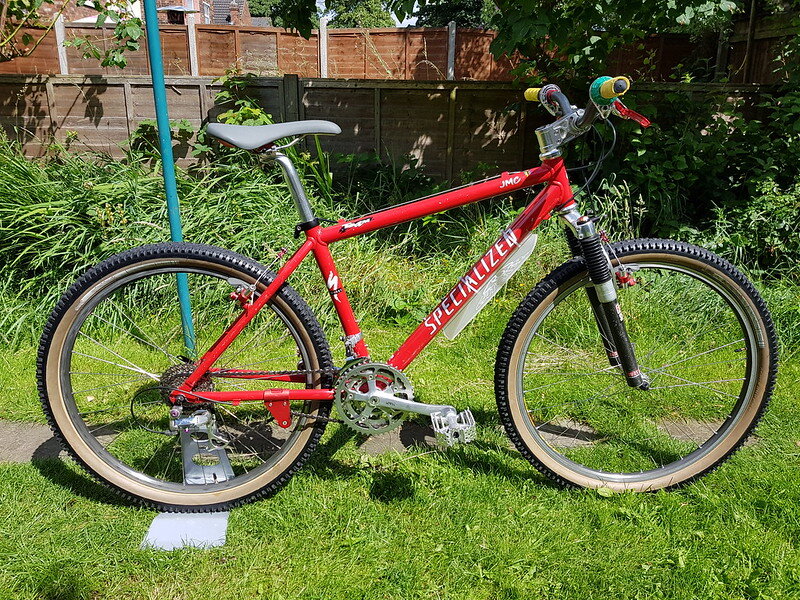 Right, after having been nagged by ChrisV40 to add a thread on this little beauty, I have given in! Picked this up two weeks ago from a member on here Marty455, who has done an amazing job of creating a very close replica of Jason's bike from the video 'Dirt' The video, Jason and this bike...

Yes, my frame was from 1994, but, as I mentioned above, I liked the idea of building something that represented a bike that had evolved as if it had been ridden.

And somewhere between the two examples above, and my own personal tastes, lay the dream bike of my 12-year-old self...
Last edited: Apr 28, 2021

Fantastic ! I too yearned for the same bike bitd. Iconic frame, and I think this will be a great build

Okay, so we'll get back to the frame shortly, but it was hard to look much further than these for my choice of forks: 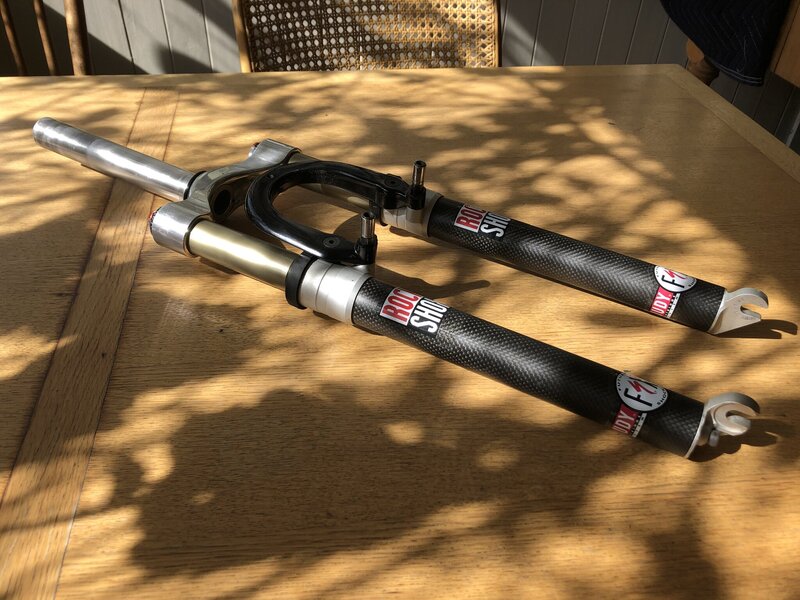 Which was a great introduction to the overpriced world of retro MTB!

Now, don't get me wrong, I'm thrilled to have these (is there really another fork I could have gone for?) They've been fully rebuilt and serviced and work lovely, but wow... I didn't expect when I started out that I'd be paying this much for a pair of forks!

How naive of me; these days I've long since made peace with the fact II'll be spending more on tires and inner tubes than the frame!

Anyway, you'll recognize right away that these particular Judy FSX's don't have the correct/original brake arch. I weirdly like them with this one, but I am on the lookout for the correct version, if anyone here has one lying around they wouldn't mind selling for a reasonable price... 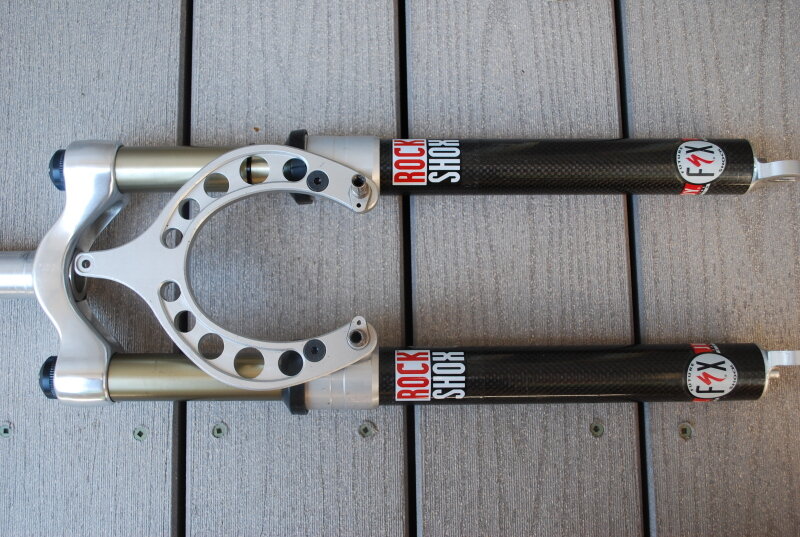 Other than track down the above, all that was left to do was switch out the canti bosses and hit the top part of the steerer with a few grades of wet and dry so it was ready to receive the stem: 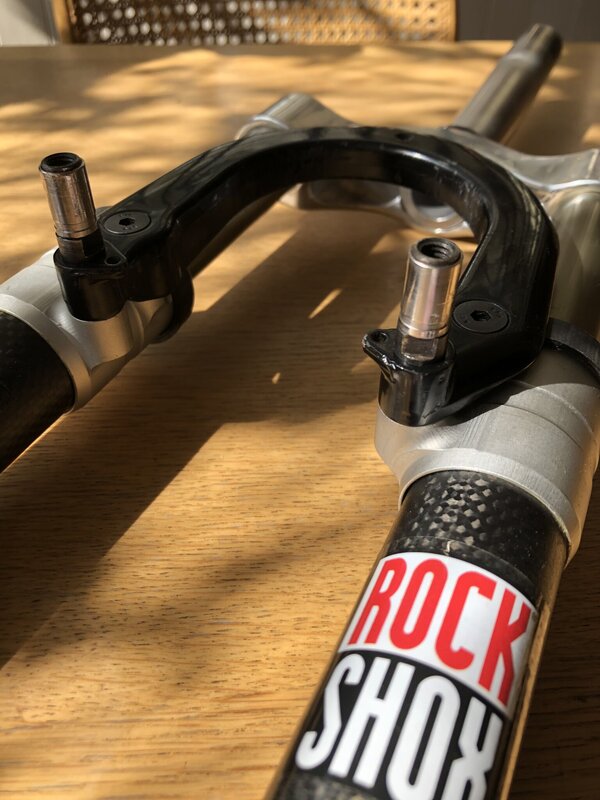 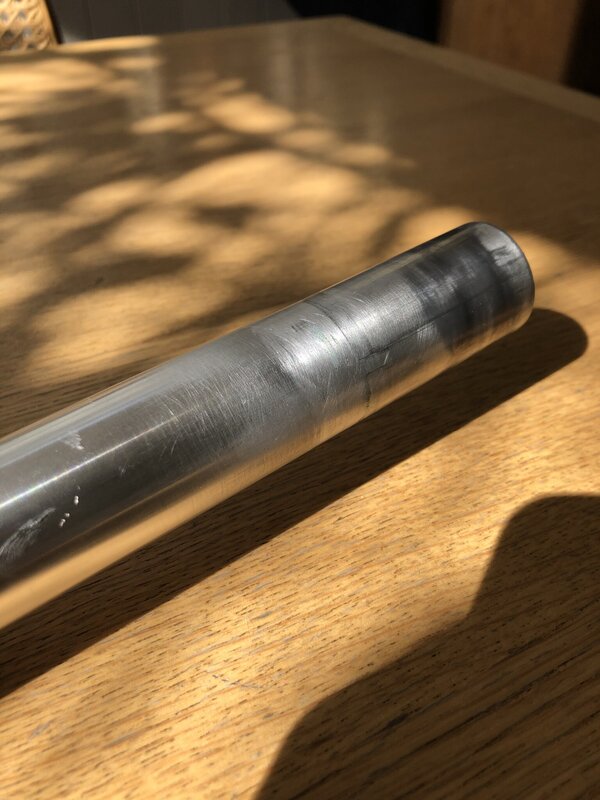 Those that saw my tight stem clamp issue in the other forum will know the reason for the latter rub down. Now everything fits perfectly, but I'll save all that for update 3...
Last edited: Apr 28, 2021

Excellent stuff, did you get sorted with a set of White Industries crank bolts?

I’m looking forward to this one, you’ve got off to a great start with the forks, they might be the best condition I’ve ever seen

I shall be keeping an eye on this, and as I'm sure you've figured by now, this WILL get expensive

I shall be keeping an eye on this, and as I'm sure you've figured by now, this WILL get expensive
Click to expand...

And that's just the seat

Peachy! said:
Excellent stuff, did you get sorted with a set of White Industries crank bolts?

I did, but you've given the game away a little there, haven't you?

As for shipping... I've actually offered my services to a couple of people on here already! More than happy to help out if someone needs it. I get pretty decent UPS rates through work, but it's still probably only worth it for larger bits, or if you don't mind waiting and combining a few things to make it worth your while! Usually around $60-70 to ship from here to there.

I wouldn't trust the post office with anything, not after this build! (More on that next post).
You must log in or register to reply here.