Great work so far! A red M2 of some sort is definitely on my list.

Much as I love those Azonic stems they are a bear to fit and remove; you did the right thing in not removing too much material because when over tightened the top surface dents or cracks.

A few more parts secured this weekend, some others lined up for next...

Should have some more updates soon.

With lots of photos!

So before I get to the next major component (the wheels), I want to go back a little to talk about the inspiration.

When I started out with this build the main points of reference were the Hot Rod spec and the JMC bike. And while those two things have guided everything that's come since, especially the procurement of certain iconic parts and White Industries bits, I still wanted something to make this build unique (maybe not unique unique, but definitely my own).

One way I wanted to do that was with the overall colour scheme. I wanted to build it around something, I just didn't know what. And for the longest time nothing really presented itself to me. Then, serendipitously, a few things happened all at once in the space of about a week...

Suddenly it was very obvious that I'd build the entire colour scheme of the bike around the forks.

At almost the exact same time, I stumbled across @ibbz Bianchi Martini thread, and his champagne, silver and black component combo was a great source of additional inspiration. So, credit where it's due:

Bianchi Martini Racing Titanium Megatube - Reparto Corse 1997 FRM Cycle Technology and Ritchey WCS build (After build notes: I’ve tried to stick to the spirit and period of the frame - which is an actual race frame from Italy. The nature of the FRM components and the lack of available...

The above, combined with a double stroke of good fortune (more on that shortly and subsequently), meant the build spec and colourway was now decided: An FSX Judy-themed S-Works M2.

The first bit of good luck was with the wheels. Despite having already bought a set of White Industries hubs from a member on here (cheers again @Spudalumps!) another appeared on eBay one Tuesday afternoon, located here in LA and attached to some reasonably minty-looking Mavic 217s. In guess which colour? Anyway, some back-and-forth later, the seller agreed to meet for a cash sale at a "very reasonable price". And the next day, having met the fine gentleman in a Starbucks carpark on my way into work, I suddenly had my wheelset in the back of the van: 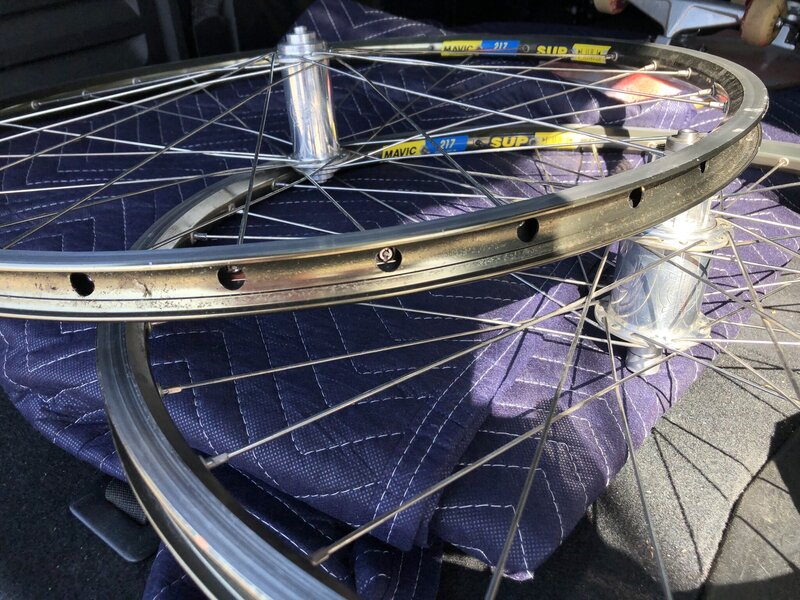 Here's a quick before: 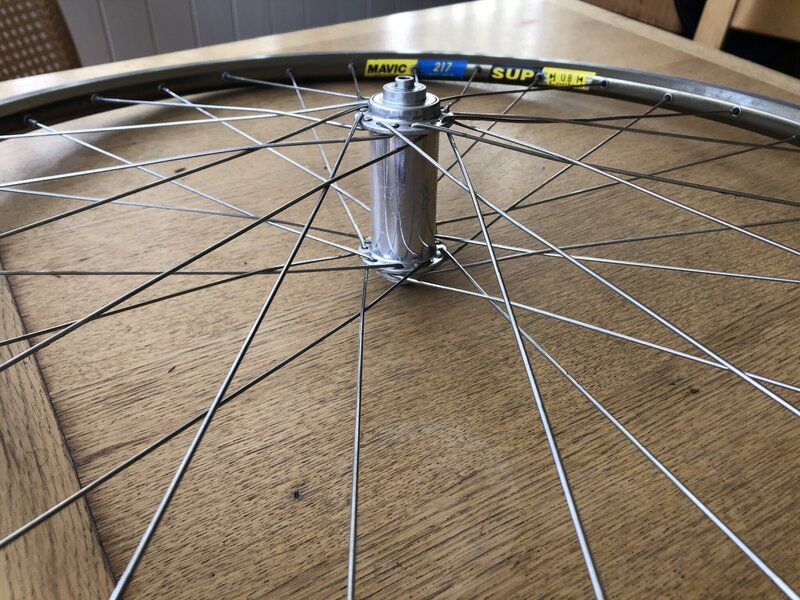 And a couple of afters: 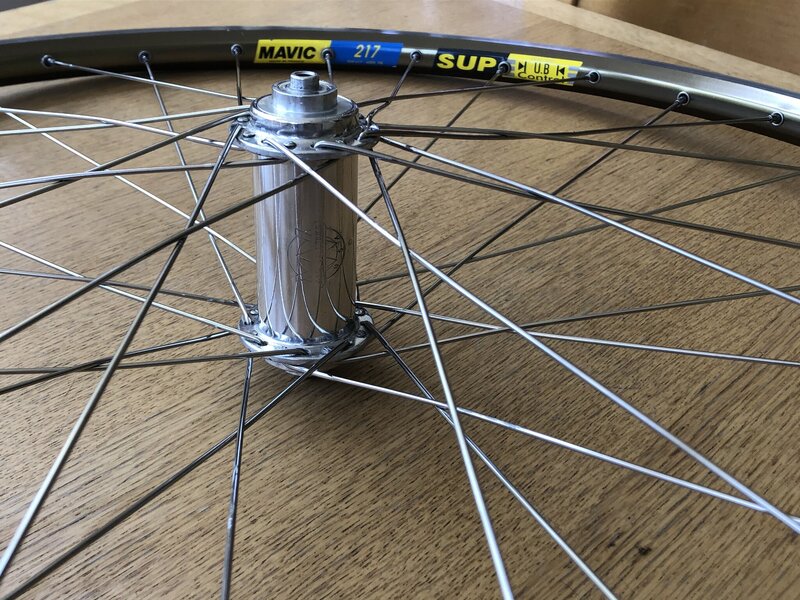 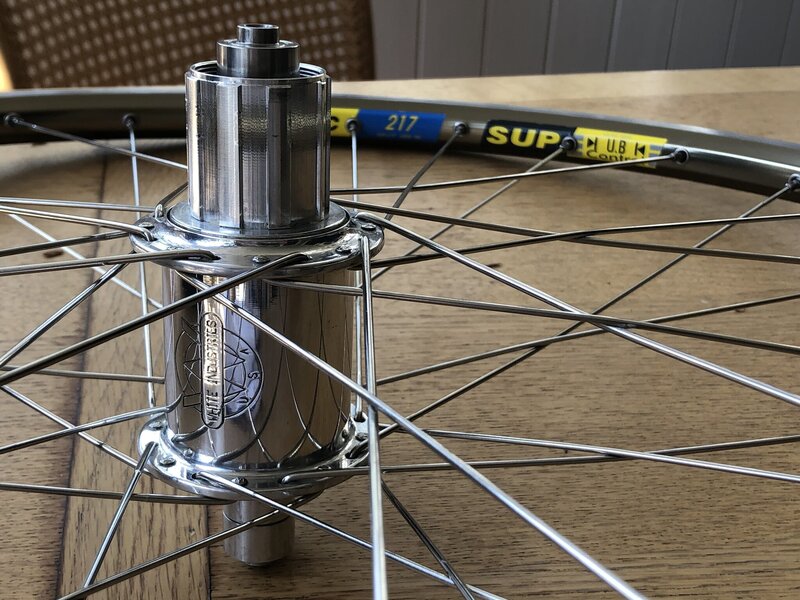 Now they're not perfect, but I'm hoping they'll run smoothly enough. And I plan on taking everything to the LBS before its maiden voyage anyway, to make sure I haven't fucked anything up too badly; the wheels are true-enough, and the gears are properly indexed. Worst case scenario: the wheels get rebuilt at some point in the not too distant future! 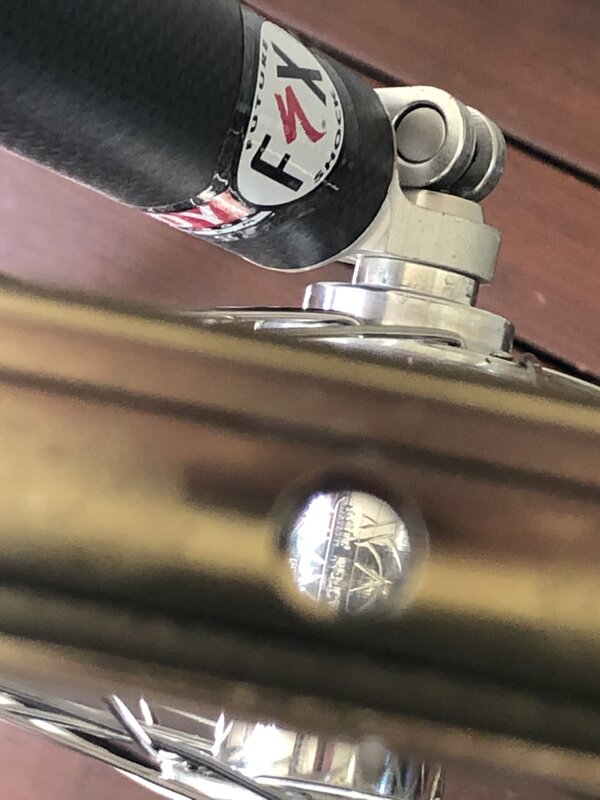 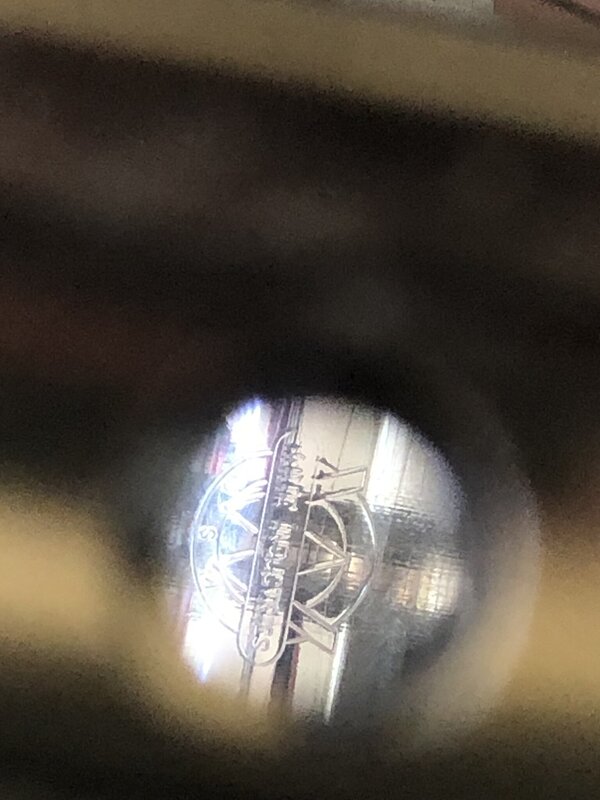 Anyway, this project is now starting to resemble an actual bike: 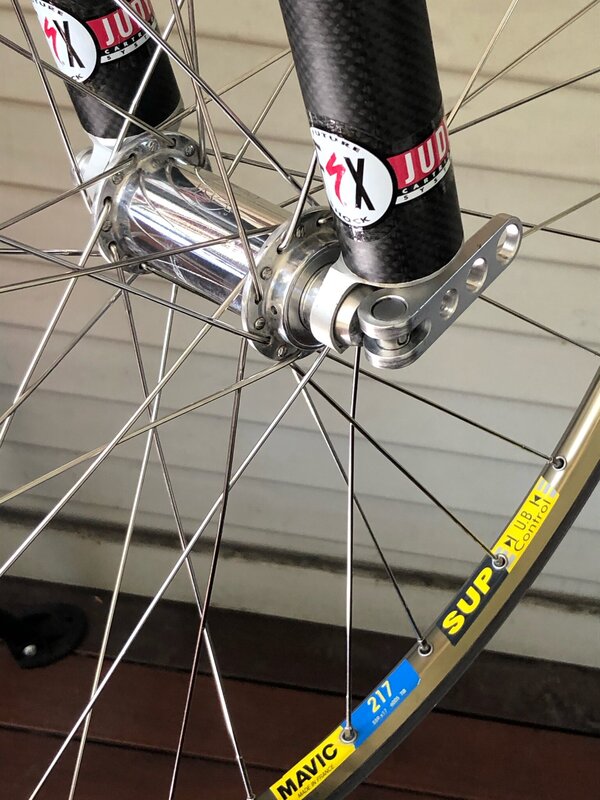 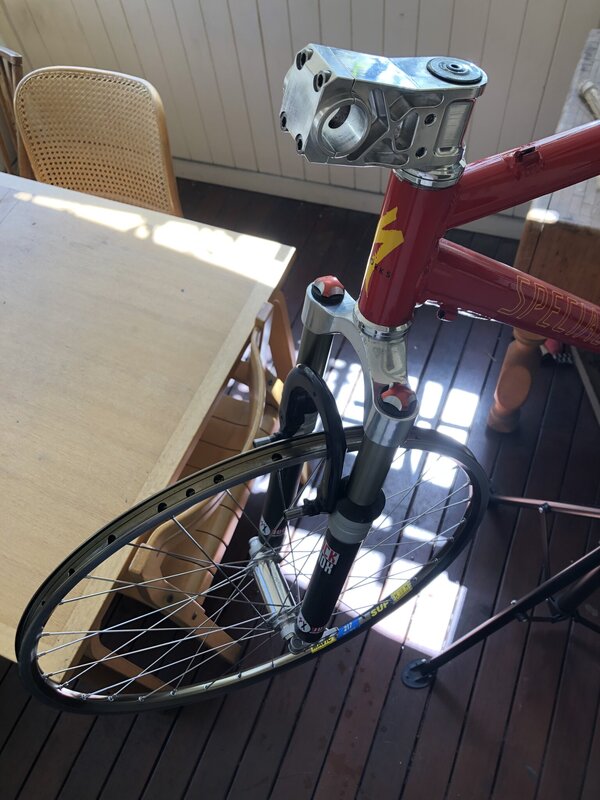 Well, I reached out to @timkrik, having clocked that he was here in LA, on off chance he might have a few spare bits in need of a good home...

And it turns out Tim had about half of what I still needed for this build! Talk about a goldmine (thanks again Tim!)

Anyway, a set of repro Smoke and Darts were procured on payday, along with a complete set of Ringle Holey's. Which, while a little dinged up, weren't in too bad a shape (especially not for this build) and were duly cleaned-up to an acceptable degree: 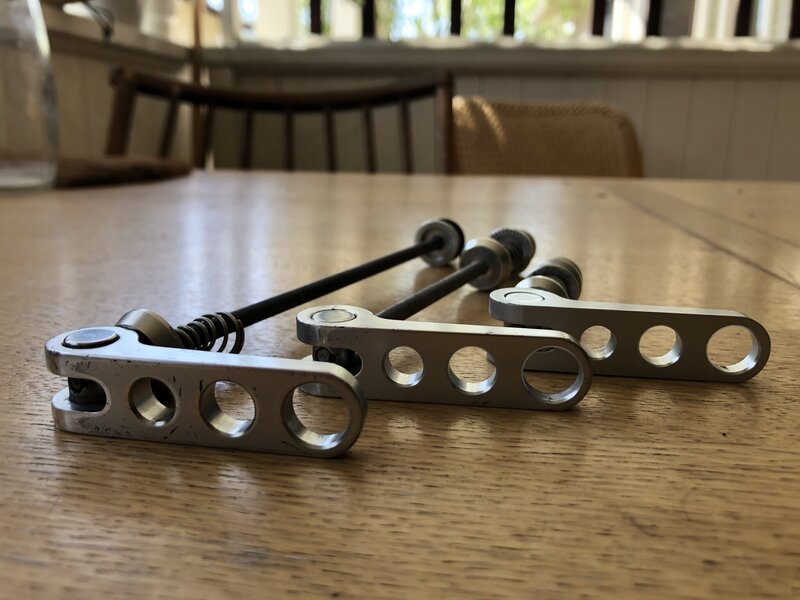 This also meant a new, potentially major financial hole was about to be dug: I'd need that original FSX brake arch after all!

It just wouldn't seem right to build the bike around the forks if the forks weren't completely correct. Plus the Holey QR's meant I really would need that beautiful brake booster full of holes now to match them!

Apparently these have become increasingly difficult to find, and are prone to cracking, making spares even harder to come by. All of which means that any leads and/or good samaritans would be greatly appreciated! (See also: https://www.retrobike.co.uk/threads/desperately-needed-rockshox-judy-fsx-brake-booster.427474/)

Buying another set of forks just for the arch doesn't seem like an affordable solution at the moment!

Anyway, more on the finished wheels in the morning; it's late here and I'm fast running out of space for photos anyway...
Last edited: Apr 28, 2021

Retrobike Rider
PoTM Winner
Kona Fan
This is going to look flipping lovely, and I think as hard as it will be to source, you're right on the fsx brace as it just won't be right without it will it!

I was stupidly lucky and managed to find an uncracked one on ebay for mine a while back, but bear in mind they will all crack if you tighten the mounting bolts too much, they certainly weren't meant to still be around 30 years later unfortunately lol.

And before you ask I've already parted with my cracked brace I'm afraid, donated it to a member on here to complete his forks I'm afraid

That means a lot coming from you.

As for the brace... I can see this dragging on, and on!

So, the morning after...

On went the almost NOS M900 cassette, along with the skewers and the Smoke and Darts: 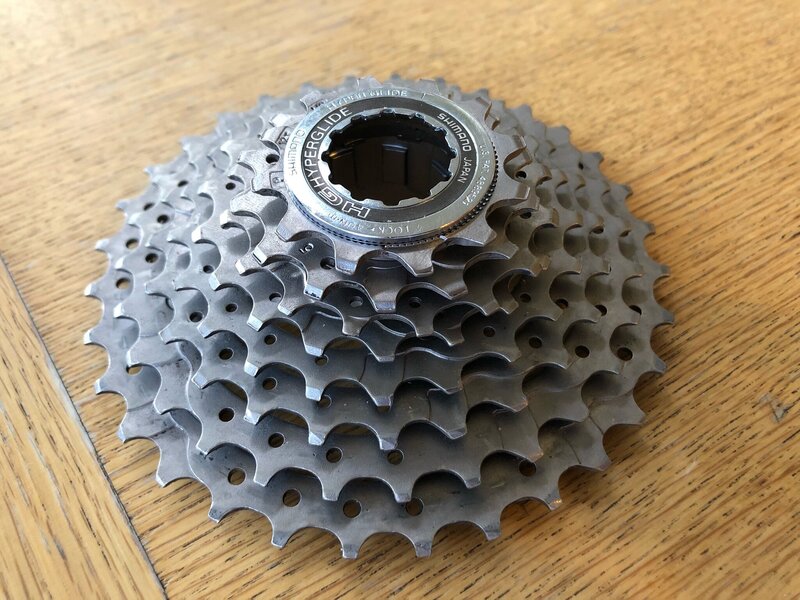 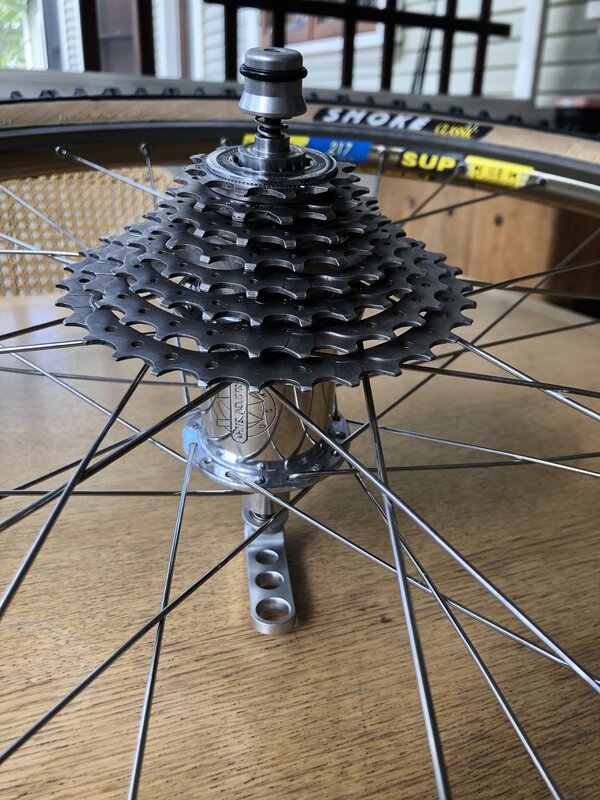 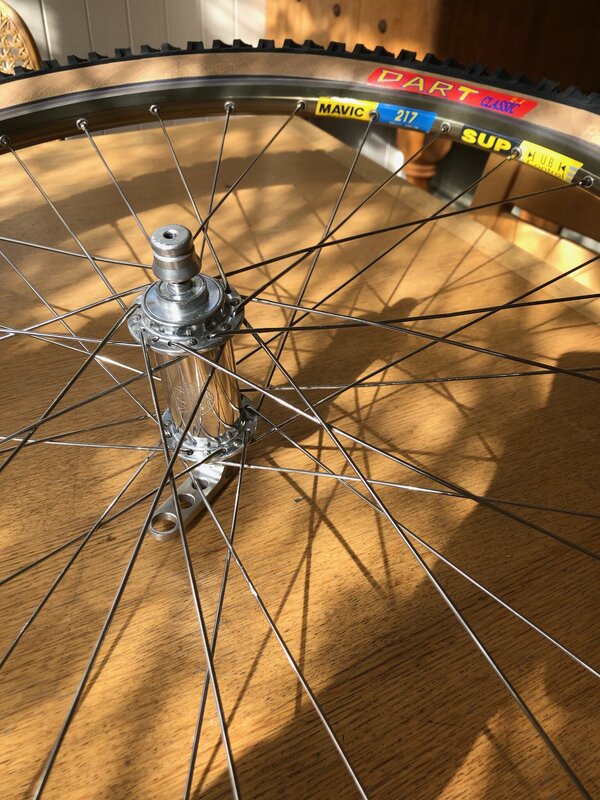 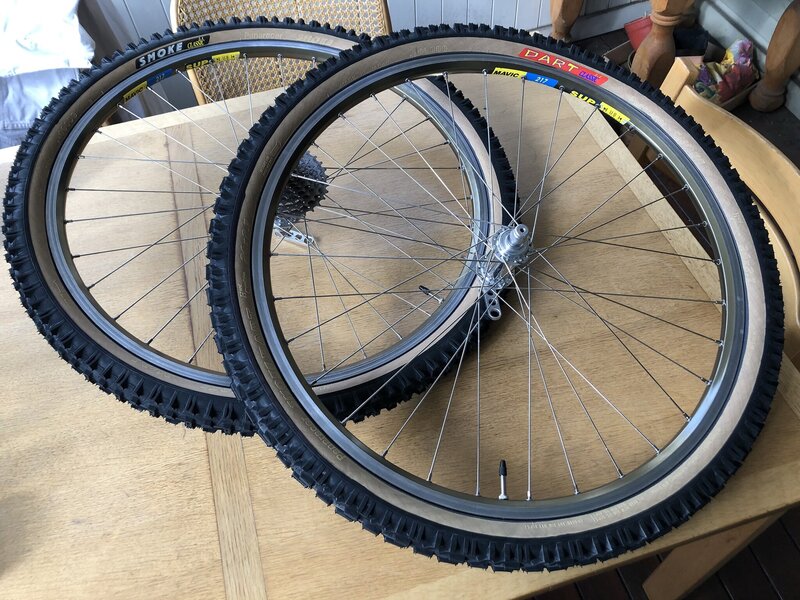 More and more like a bike with each passing day... 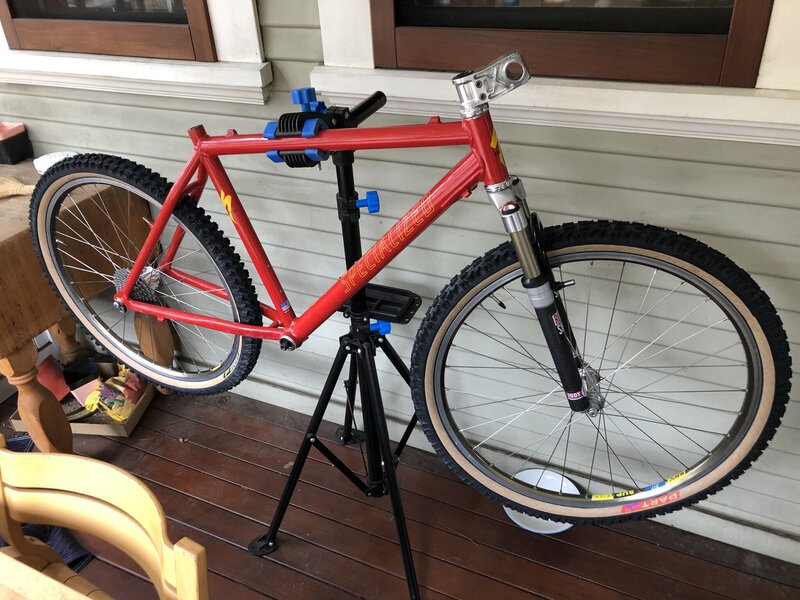 Well, I didn't expect it to be this long between updates, seeing as how most of what I've needed to finish this bike has been in my possession for a while now. But then life happened, so...

Anyway, back to the theme of the build and the good fortune for a second...

My plan for the crankset had always been White Industries, but I didn't really want the forged in Japan Sugino version; I wanted the original CNC'd in the USA C-Series. I lost out on a mint set with some lovely Syncros chainrings, which was frustrating, and all the others floating around were prohibitively overpriced. But then the same week I scored the wheels above, a nice set appeared on eBay and my bid won out.

Now, I assumed I'd most likely go the M900 route on the rings (more on that particular group later), but the eBay find came with a presentable set of Sugino rings; the kicker being that the outer was in a lovely, very well-matched champagne/bronze colour.

So I guess the bike gods must approve of the FSX theme?

Anyway, they arrived at work a few days later, in pretty decent shape. Like everything else on the bike, they weren't flawless but that was actually a good thing, as I won't be afraid to ride it in anger now. Everything so far is in good-to-great shape, without being pristine and thus running the risk of me being too afraid to actually use it!

Here's how they looked when they got to me: 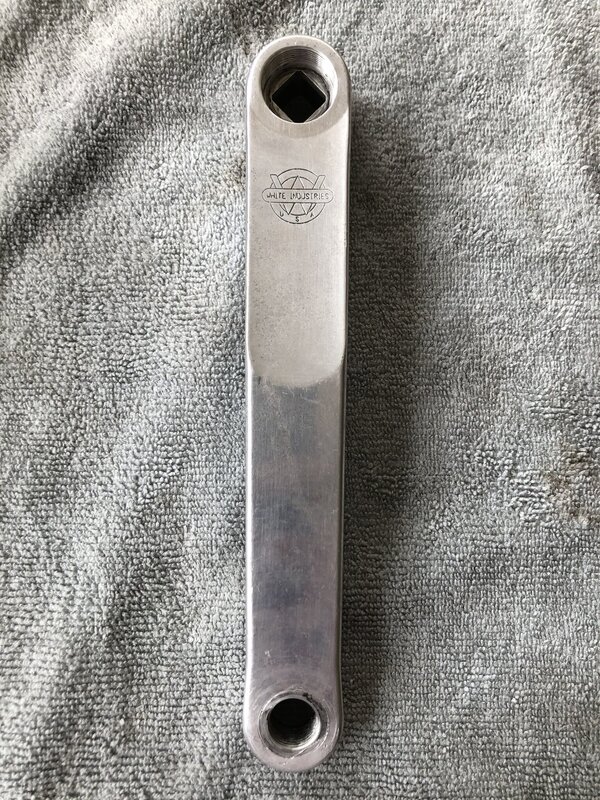 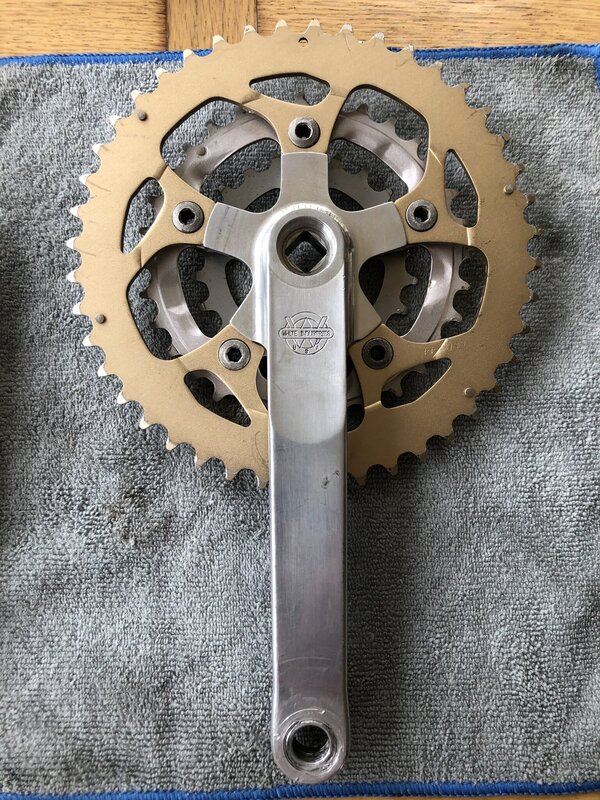 And after a cleanup and polish, some WI crank bolts were procured, along with some fresh chainring bolts from the LBS, so that now they look like this: 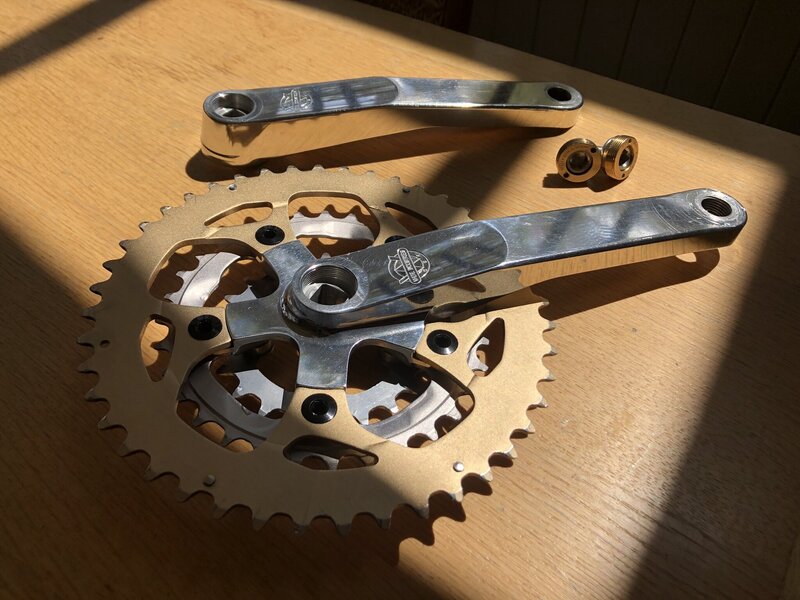 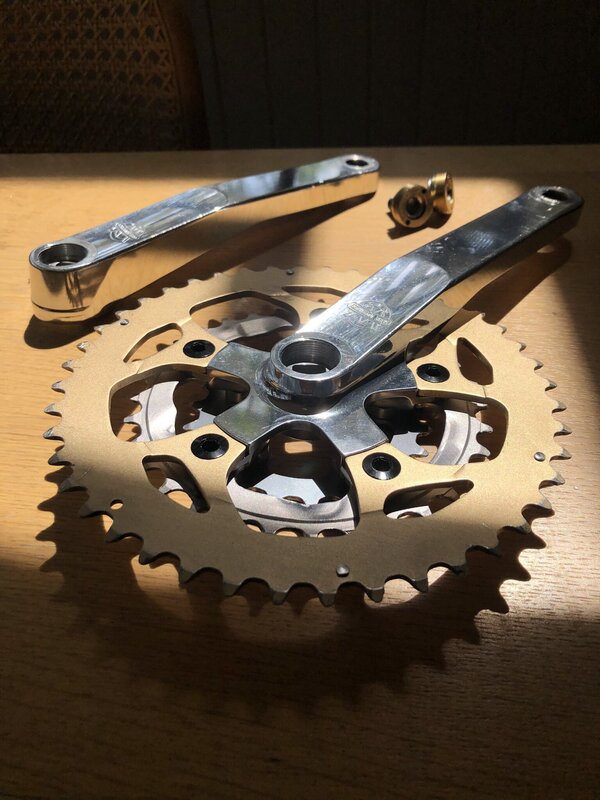 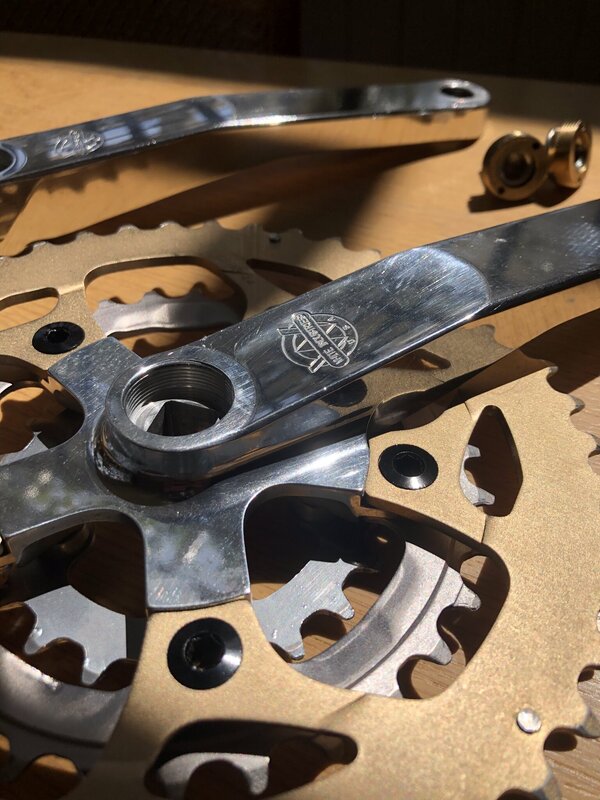 I didn't want to go too crazy on the polishing, for the reasons outlined above; too shiny and they would look out of the place on the rest of the bike. So this was more a tarting up than anything. Still, I think they came out nicely enough? 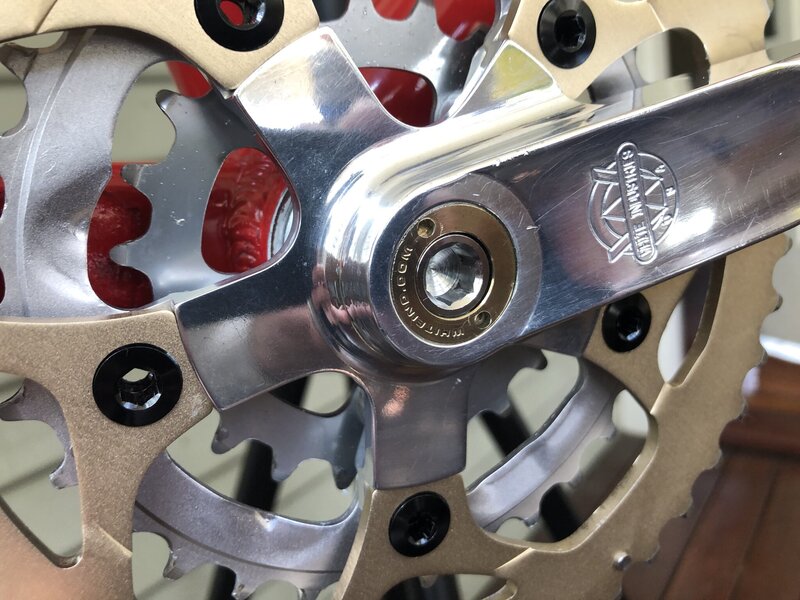 And, most importantly, work well with the rest of the build.

I'm not sure how the rings will actually ride, which means there's a chance I may revert back to the classic M900 option at some point. Especially because these have gone on now too... 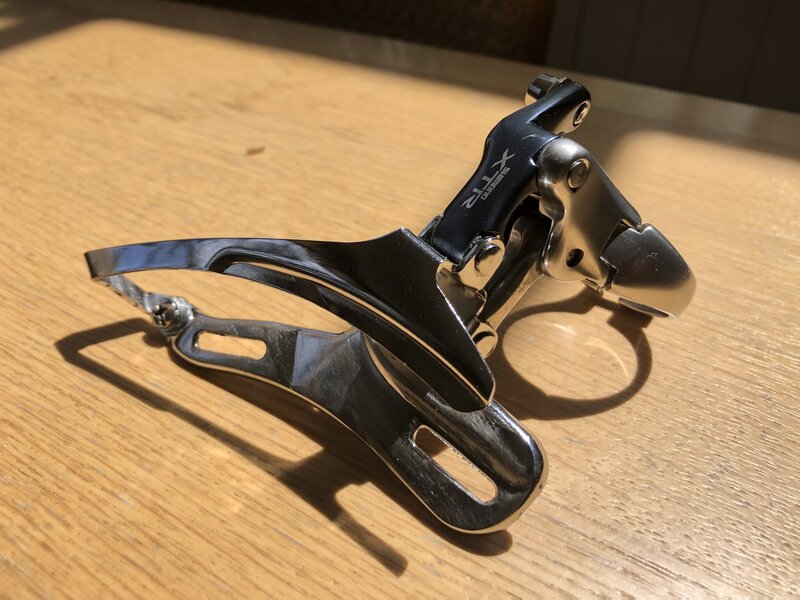 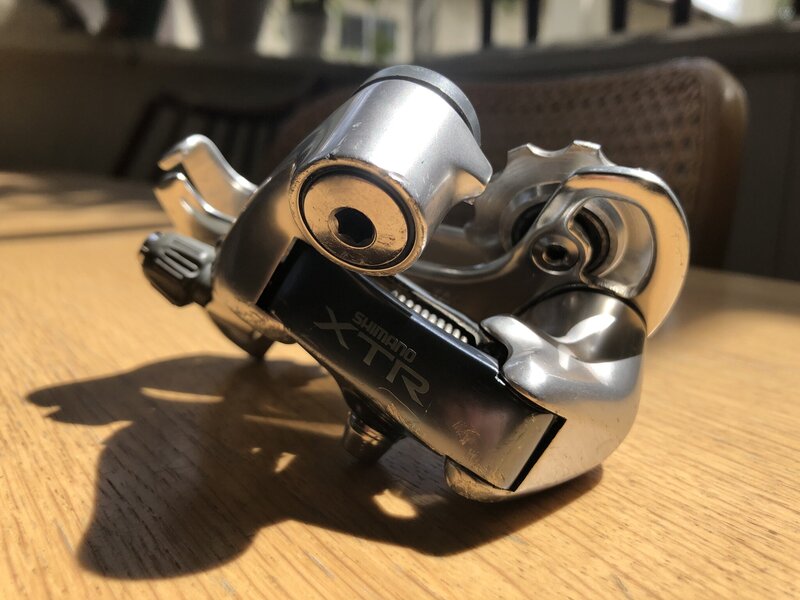 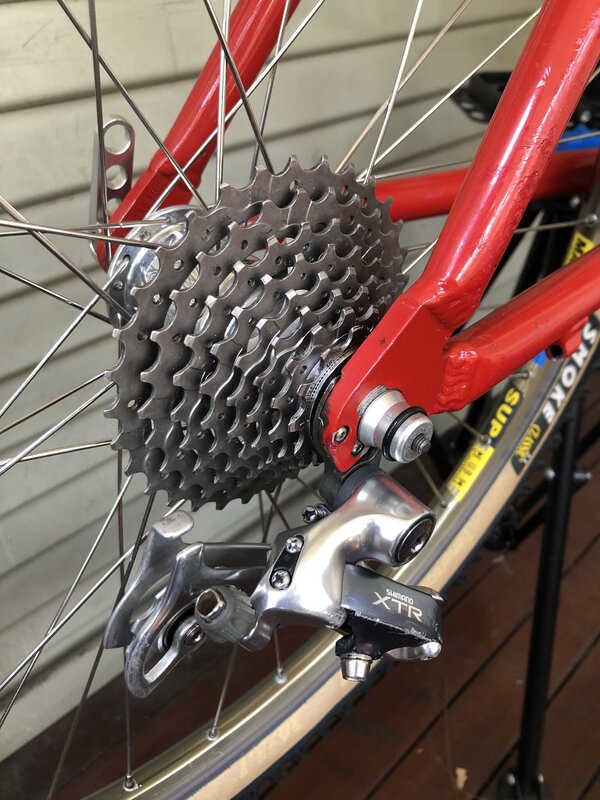 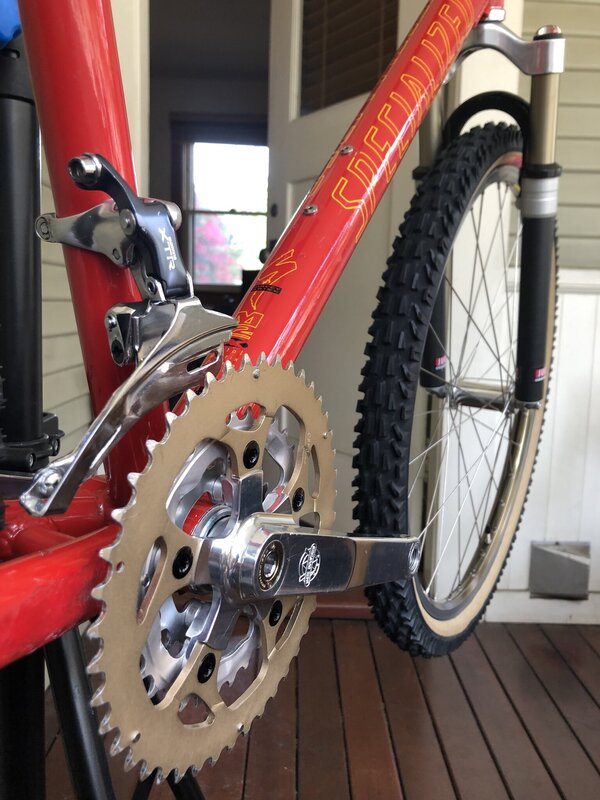 Overall, I feel pretty good about the direction things have taken, and there's another colour-themed component update to follow this one.

But I'll leave that 'til tomorrow.

“Too shiny” What’s that then?

Don't worry Peach, I promise to do one last mega polish before her maiden voyage!

Nice work btw.
One thing I’ve done in the past to make a scratched up M900 look a tiny bit better is to carefully file/sand the scratched edge with fine wet&dry paper on a stiff board, it looks more like a neat hi-lite rather than gravel rash. 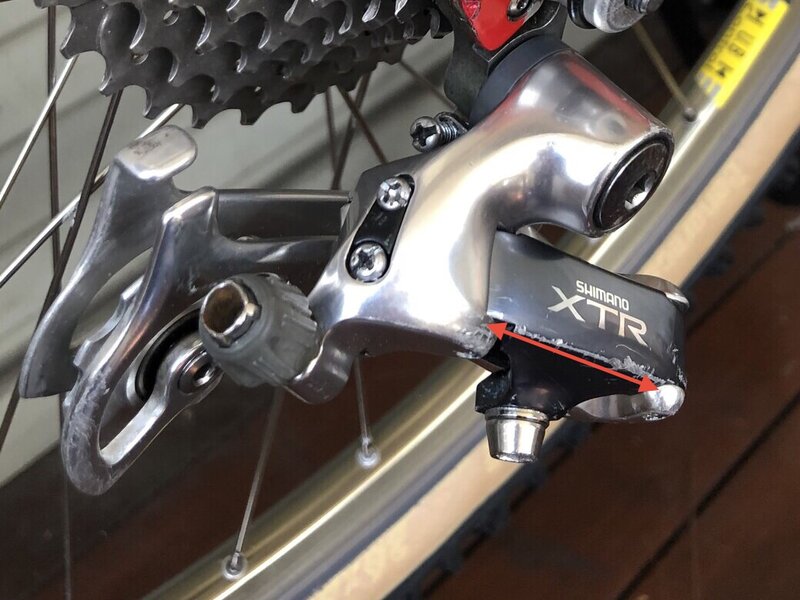 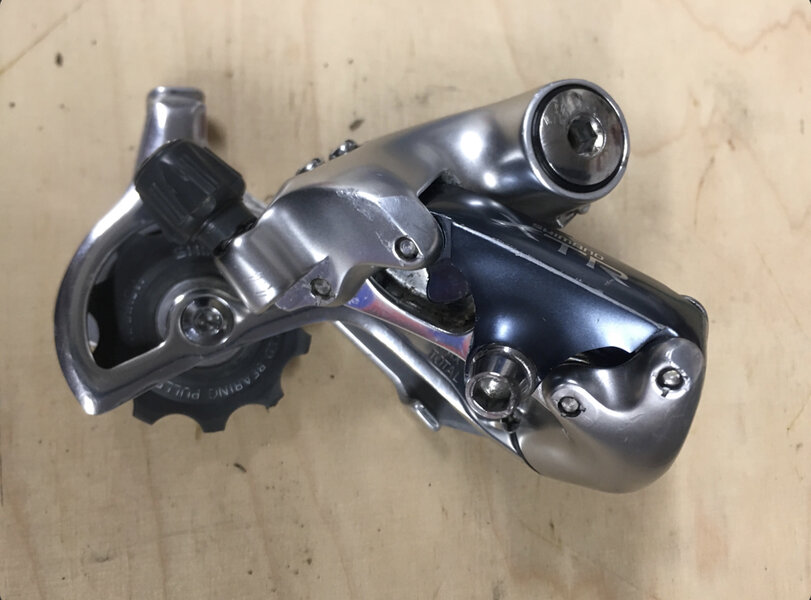