Following on nicely from DrS' RC-100 BoTM victory we have 20 questions with Adrian Carter of Pace Cycles, one of the leading lights of the British MTB scene. 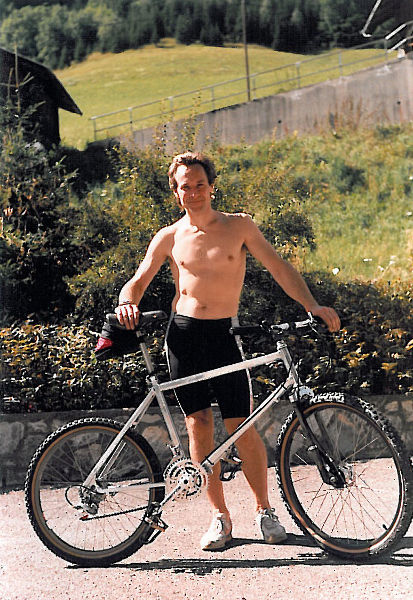 Adrian Carter with early proto RC100 from about 1988. Note the 24in rear wheel and drum brakes. The bike also had the first threadless headset (bored out Shimano 105 road headset) fitted with one-piece steerer tube stem.​

1) RB: Ok, we've all heard stories about tubes not rolling off workbenches, box section strength and cartoonists saying they're easier to shade...
why were they really square section then?

Adrian Carter: Nope not heard those stories and no one ever made fun of square tubes that I can remember. Actually we used box in some frame areas for the same reason why many manufacturers now use them- because you can make them handle a load better when the load is directional. That is, if the load acting upon a frame tube is the same from all directions then it makes sense to have a round tube- but we know that in fact there are primary loads acting upon a frame tube and these don’t come from all directions but from a particular one (vertical loads being a main one). So we spent some time doing the math, studying what loads really were applied and using a bit of FEA to determine what the loads were, what direction they were coming from, then stretching the axis of the tube to best withstand them. So we had square, rectangular, round and of course round plus two vertical webs up the back in the case of the head tube! (just showing off at that point).


2) RB: Did you intend to create quite such an ahead (geddit?) of it's time machine as the original RC100? Or was that just something that came naturally when you saw how 'orthodox' many manufacturers were being?

AC: I was from a moto background, not cycle. So I hadn’t been influenced by the traditions of cycle frame design. Climbing off a long travel fire breathing dirt bike onto an early MTB was bit of a shock (mostly to the arms and back). Any level of redesign would have been an improvement. Being a petrol head made me receptive to motorcycle and general automotive design concepts and how sound engineering could be applied, rather than what could be redesigned within all the crap industry constraints - roadie BB size, pre war headset designs etc etc. Additionally the first prototype Pace frames were not designed with any commercial intent- they were almost interesting design exercises and diversions as we just played around with parts we’d made for our own early mountain bikes. I couldn’t have possibly imagined that it would lead to the vast wealth, legions of MTB groupies and glass pyramid Pace HQ sat in our own private moorland retreat. 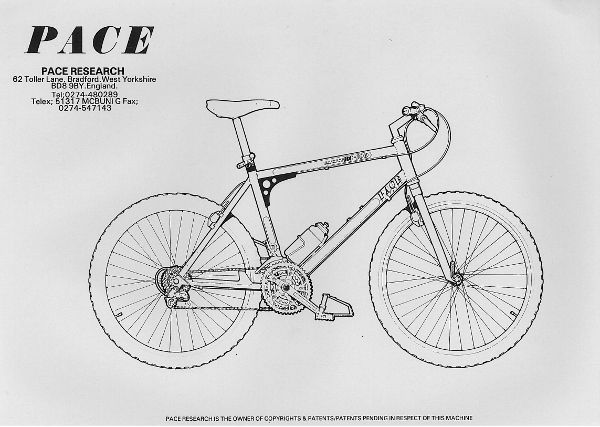 Pace RC-100 blueprint​
3) RB: Like many, I remember lusting after that bike in the small press picture that appeared in MBUK back in 1989. But what was the drilled black shoulder pad looking thing under the top tube/ seat tube bridge?
And why didn't it make production?

AC: Bit of closed cell foam we chopped out on a band saw to make shouldering the bike easy. But it looked naff and wasn’t the right density so it was consigned to the skip. Shouldering the bike - now there's a good reason for box sections.

4) RB: Why haven't more people added Crud Catcher bolts to the underside of down tubes? (One of the best ideas I've seen in frame building.) It seems so much more useful than an extra set of bottle cage mounts down on the sh*t collection area of the down tube that so many offer.


5) RB: Did you ever want to make a Ti one? And would the machinist that sculpted all those oval lolly stick cut outs form the tubes have been given a special medal? Could you still be talked into it?

AC: Lets see. Use titanium because its heavier. And also because its ten times more expensive. Then machine half of it away and chuck in the skip. No I’ll stick with alloy. Those with long memories might remember Pace and Merlin Metalworks had a thing going at one time and we did start to develop a few bits in Ti (a road fork being one of them) but ultimately these didn’t see production. We did have a range of Ti-bolts and stuff made in the old Russian Mig factory and they were quite sweet tho'.


6) RB: Most people probably know this, but for those of us that don't (me), what does the RC stand for?

AC: The initials of my first girlfriend in primary school.

AC: Well sometimes it numerically lends itself to the product- RC29 (29nr
fork) Rcsub-130 (early Renthal-Pace handlebars sub 130g). Rc405 (five inch bike). RC+8inches- no sorry that’s a different product range. Or it’s simply chosen as a product code at random- like RC30 was (although with some influence from the superb Honda road racer). In fact you can be the first to know that we’re about to release a new product with an RC80 product code.


RB: Of all of them, what is your favourite Pace Frame?

AC: I know that you’d want me to say it was one of the iconic box section framed bikes- and I guess the first prototype purple DH bike from the early ‘90s would be right up there. Only gets second place as I found it difficult to turn in, or in fact do anything until pulling 35mph+. But the latest
RC506 gets the nod because it does all of that (sales plug No1).

Early design exercise for a short travel Pace XC bike. The 'shock' was actually a stack of elastomers! Rode quite well actually.​
9) RB: And your favourite Pace component?


10) RB: Pace seems to slot right into that very British ethos of a small company bucking trends and going their own way with relatively small production and high end product. And it has always drawn huge endearment from the Brits. How did the rest of the world take to your ideas? And did that Britishness help or hinder abroad?

AC: As you could imagine- we were a bit hesitant to launch a square bike to a round world- and at first found it was received with complete bewilderment in some countries (Belgium and France for example) but well received in others (Germany and italy). Actually same applied in UK- it was a design that demanded an opinion, and opinion was divided into those with taste, flair, charm and good looks who liked it, and the rest who didn’t.


11) RB: The all important question...what's your favourite cake? The Retrobike 'Cake-O-Meter' reckons you're a Christmas cake type of chap...?

AC: My cake-o-meter is calibrated to read low revs by the stickylicious Jammie Dodger, medium revs by the king of biscuits Mc Vities Digestive and red lining when fully loaded with Fruit Christmas Cake (alcohol fuelled that is).

Now feeling rather peckish actually so time for Tiffin.


12) RB: Should anodised purple ever come back?

AC: The mountain of unsold anodised purple RC200 and 300 frames we still have always reminds me sales stopped dead in this colour. Only kidding.


14) RB: Desert Island Discs scenario...one luxury...a bike, or something else?

AC: That’s very kind. One luxury? Please can I have the Merc Van from Tesco ‘shop till you drop’ driving up the beach please every Friday night? Fully loaded with all ingredients necessary to have a red wine fuelled curry fest?
Ideally driven by a couple of… actually I think you get the picture.


15) RB: Were there ever thoughts on a Pace road bike?

AC: We did in fact make a STEEL road frame and showed it at a London Show- probably about 1991. Nice white colour scheme. Interest was low so again, this along with most prototypes, met their destiny under the part-off saw in engineering.


16) RB: What ever happened to those two mini RC200 Framesets that Seb Rogers Famously shot for Mountain Bike World (RIP) magazine? They were so cool.

AC: They’re just sat opposite me on the shelf looking all alluring and spangley. Offers over £10k each accepted.


17) RB: There must have been loads of those type of bespoke random one offs came out of the Yorkshire factory over the years...any more lurking, ready to appear on an ebay near you (or a Retrobike Classifieds section) soon?

AC: Have I mentioned the part-off saw?


1 RB: So, I seem to remember, 'cool' blue, blue, green, purple (?), red, silver, grey, black. any other anodised colours/ mixes that never made it passed the "we can't release that!" conversation in the boardroom?
Rasta? Ano Camo?

AC: Some character called Jo Burt once asked for a particular colour. I picked a few random pces out (from under the part-off saw), anodised them pink (or perhaps green- can’t quite remember now) and sent off to Jo. He chose the preferred colour and sent back for me to match. It languished on the window sill in my office for some time then one day I noticed this brown goo ozzing out the tube end. Christ I thought- the tubes possessed. Looking closer, then sniffing, then dipping finger in and licking revealed some chocs Jo had stuffed down the tube by way of thanks.


19) RB: How has the DT Swiss tie up been? They appear to have kept true to the fork designs. Do you think we will see the Pace logo on a fork leg made here again?

AC: The guys at DT are just great and having reflected upon the sale to DT many times, am convinced there are no finer guys to carry the fork designs forward. Knowing whats coming in 2010 confirms this.


20) RB: Any chance we could talk you into a 20th anniversary RC100 ltd re-release in anodised green to allow us to all cover it in red bits?

AC: Sure. But when I send out the tube colour samples to all your readers please ensure they’re returned to me gift wrapped separately to the choc-chocs OK? 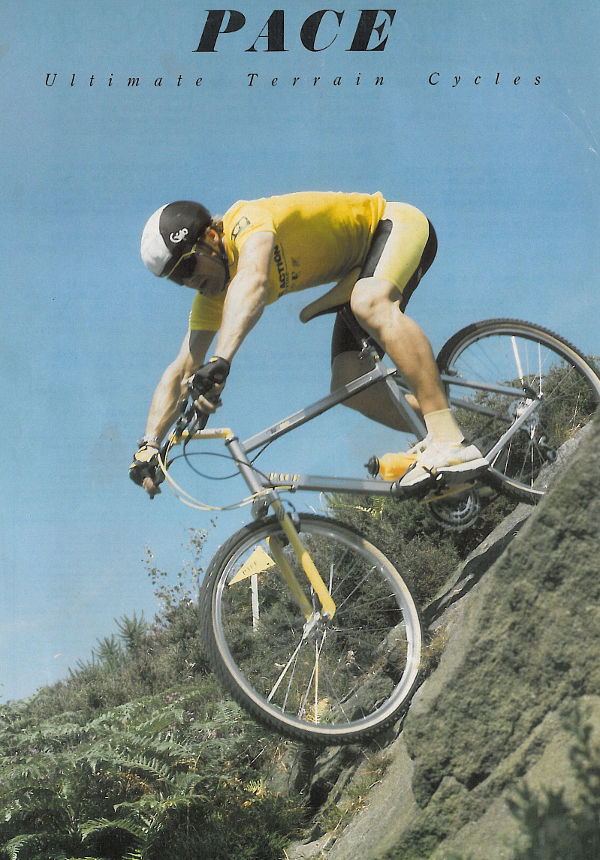 The Guv’nor · 46 · From Retrobike HQ
Admin Retrobike Rider
A

Down to earth, amusing and teases of what we all hope for in our square framed dreams.
P

I'll be the first for a re issue.I had a RC100 which i should of kept of course but was talked into a hardtail Manitou at cyclecare in Hemel Hampsted.Although desending was a sight for sore eyes as the bike was like riding an iron girder it was that rigid.
R

however its obvious the company went from being a great design house to practically nothing when he left....a shame
M

enjoyed that
more of the same please
M

Well said Mikedesign, Duncan MacDonald was the driving force Pace, i do hope he is not left out of history, Pace are a long running English manufacturer of mountain bikes. Originally based in Oxenhope West Yorkshire, Pace was founded by Adrian Carter AND Duncan Macdonald. From the start the two founding partners sought to innovate in the design and manufacture of their mountain bikes. With a background in trials motorbikes the design of the companies mountain bikes were approached from a slightly different angle.
You must log in or register to reply here.

Pace RC35 - show us yours & any knowledge