20" cromo GT talera from 1996 in metallic red/satin fission, sell or consider swapping for an 18" mtb of similar worth from early to mid '90s.
Bought as a fixer upper and done quite a bit of the work but gave up investing anymore time and money into the project when I came to the realization the frame is just too big for me. Bike has been in storage for about 2 years now.
I think the cassette freehub in the original wheel is either going to need servicing or replacing as it jumps when forcing down on pedals, could potentially be warn chainrings having now gained experience of these since.

It's had a new shifter for the rear, new cassette and chain and new bottom bracket, along with cables, swapped stem out for shorter one but still have the original.

Frame is in great condition with no crash damage or other dents, also had a generous amount of waxoyl inside frame to protect it for years to come as it's steel


Components are Altus/Alivio/Acera, it's got it's original saddle, grips and tyres, think those might be Tiogo Psychos, writing has faded a bit on those.

I wouldn't be parting with it if it was in my size as I love the '90s colours and graphics.

As you' ll be aware it's a lower end GT model but still a good bike non the less.

Definitely suited to a tall rider.

£45 or swap with someone who's in the opposite predicament.

That's the only pic I have of it at the moment as it's in storage in a relative's shed. 20" sticker is visible on seat tube, 20" measured CtC and would be around 22" to very top of seat tube, so yeah taller rider.

Collect from Birmingham or Worcester
Thanks

Ok thanks for the tip, I'll edit my post in a bit.
I

If you don't mind a trip to Sheffield this Talera has been listed twice at £60 and not sold and is now reduced to £50 starting bid. 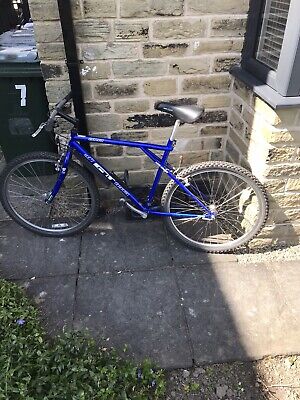 <p>GT Telera Mountain Bike 18” Frame. This bike is still in fairly good condition. Some scratch’s but still good to go. The only thing that will need changing is the tyres. Condition is "Used".</p>
www.ebay.co.uk

Was going to buy it myself but cake across a 94 in Purple Rain yesterday.

It's such a shame it's so far away from me, that would have been ideal. Thanks though.
I

Could you collect it from Wolverhampton?

It would be a bit of a pain but I'm visiting family there in the next 1-2 months.

I wouldn't be against going to Sheffield to pick it up if you were happy to pay the train fair there and back for me? (£20)

Obviously means waiting too but thought I'd throw that option out there. I've benefitted from Karma / Bargains on here before so a trip to Sheffield and back is one way that pays it back.

I'll have to pass on that that sorry, knowing my luck there'd be a bidding war on the Sheffield GT if I commit to it.
Ace functional GT though, I hope someone snaps it up soon, it'll make a great all rounder for someone.
Thank you though.

I'm lowering the price to £40, come on retrobikers, that's a steal for this old steel in a rarer colour, most examples are blue/green fission.

Any gate lovers out there?

Bump, can I even do that?
I

Hi can you shipping it to malaysia?

I don't feel comfortable shipping sorry. It's collection only on this one.
Thanks for the enquiry.
You must log in or register to reply here.