Leaving it rigid or going to stick the bombers on it ?

Retrobike Rider
PoTM Winner
Kona Fan
Oh she is definately staying rigid, I can't remember if it's a 1" or 1" 1/8th but I wouldn't have thought the bombers would fit, I wouldn't mind getting it muddy a few times, but ultimately she will be a commuter I think, source a bigger top ring for the front and some skinny slick tyres!

It looks great Spud, I'm looking forward to seeing it out on a ride soon.

It looks in much better condition now than it did on ebay.

I'm probably going for a ride Sunday if you fancy it.

Where you riding kof?

Retrobike Rider
PoTM Winner
Kona Fan
Back from the dead with this thread!!


Been using this on and off as a daily rider (im a fair weather rider so cue all the wuss comments lol) but now the weather is awesome i needed to get back on it, so with a few other bits ive changed like the seat to a charge spoon, ive done some swapping and dealing with my Caldera, that now has an xtr rear mech so the dome now sports the xt from the Caldera, swapped the avid v brakes over from the Caldera aswell, as ive fitted parallel push xt v's to that.

Oh and on the advice from mr football king up there ^^ ive just fitted a set of continental grand prix 26x1.1 tyres, been out for a quick squirt and the difference is amazing, think i need a bigger chainring up front now, and also roughly weighed myself and then myself holding the bike, and we've roughly worked out the bikes weight to be about 23lbs which im really happy about!

So a couple of pics to see what peeps think... 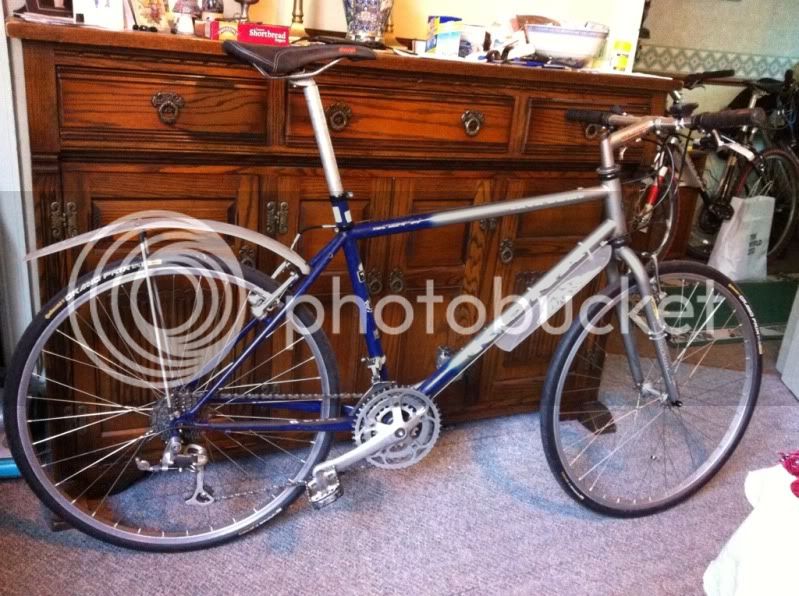 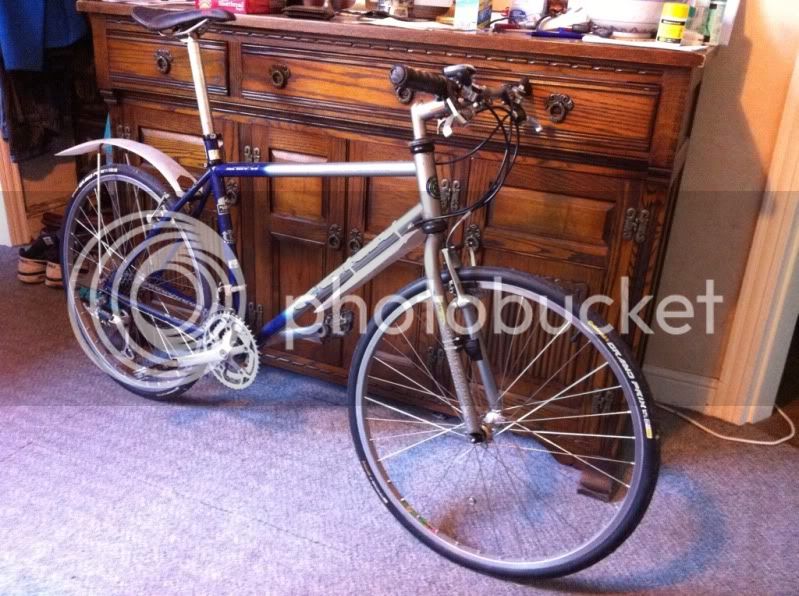 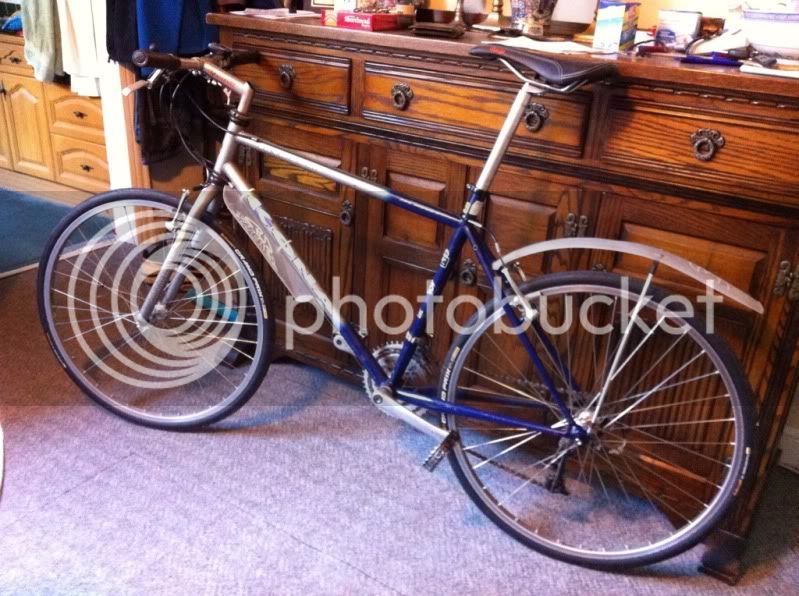 And a close up of the v-brake modification as shown to me by mr fluffychicken (after chrisv40 cunningly fiddled it together, ) 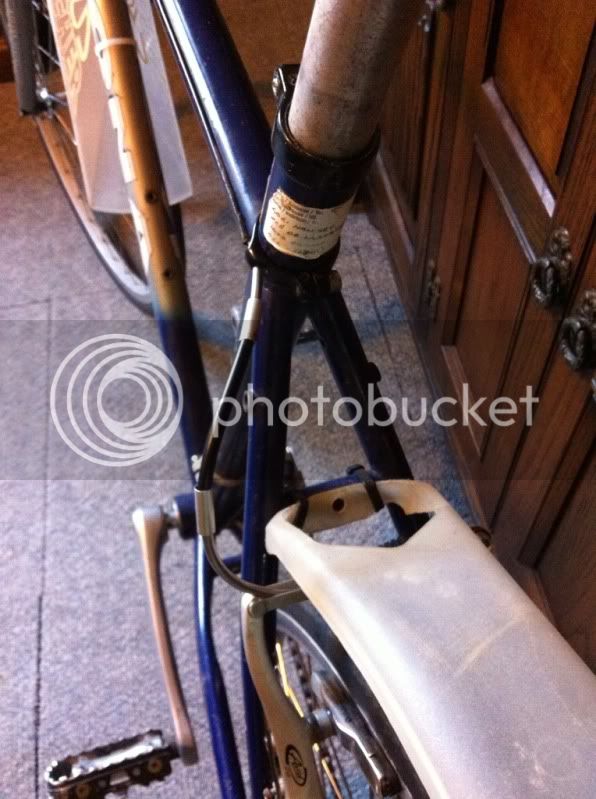 Any comments welcomed as always!

Retrobike Rider
PoTM Winner
Kona Fan
First post, picture #6 shows a close up of the cranks, theyre the oe sugino ones if thats any help, the one currently fitted is a 46 tooth one, and i went fairly steady earlier on and i almost ran out of gears on the flat bit of chants ave coming back from bricknell :shock: 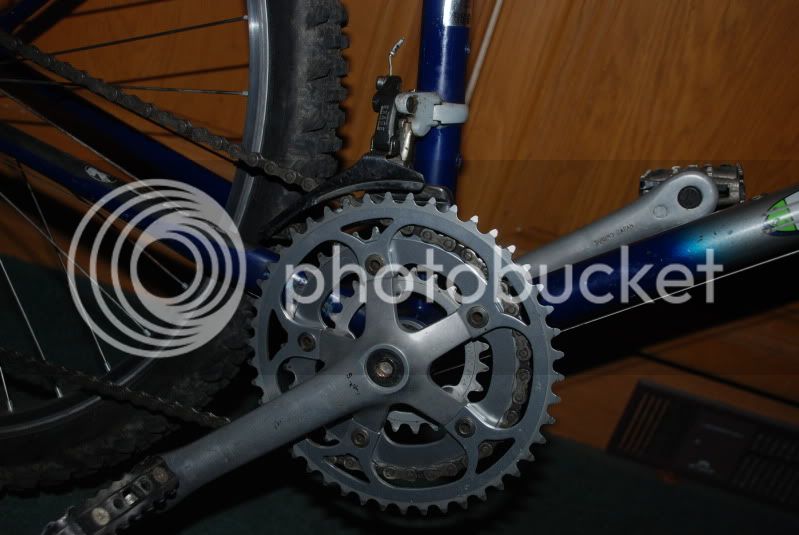 Great to see it's all set up for bombing along the roads now, I expect to see you flying past me on your commute, with the lower weight and rolling resistance.

I hope you get on well with the tyres - it reminds me I ought to sort out the chain tensioner on the Zaskar so that I can use that for my commute some days.

The cranks look 110 to me, but safest to measure them! I have a couple of larger Pace chain rings, but until I build up the Peugeot I don't know which I need, but I'm sure Ben has a good collection for you to select from.

Any idea what the bb length is? Want to find out before removing the cranks etc.. Or am I just being lazy?!
C

i have the same bike.. i am going to try to fix it up nut i havent got much of a clue.

do you know what the spacing between the rear drop outs is .. i think i need to get new whells... they druch like mad .. and are not the originals anyway .. so if you are able to tell me what size wheels this bikes needs i would really appreciate it..

Chris
You must log in or register to reply here.