The easiest way to start this build is to link to the sales ad that I collected from: free muddy vox pathfinder for restoration by enthusiast

I had a feeling from the initial posts that the seller wasn't too bike savvy, so rather than ask questions, I thought I'd take a punt and sent a PM with my phone number included. The seller (feels weird calling her that) seemed about my mums age, and lived in a nice old house in a nice old village just outside horrific old Huddersfield. It's only 25 miles away, mostly on motorway, but takes an hour to get there if you foolishly attempt to travel during late rush hour, like wot I did.

She'd been clearing out her shed, which had already eaten two bikes, and were now brown blobs in her skip. As for the Muddy Fox... 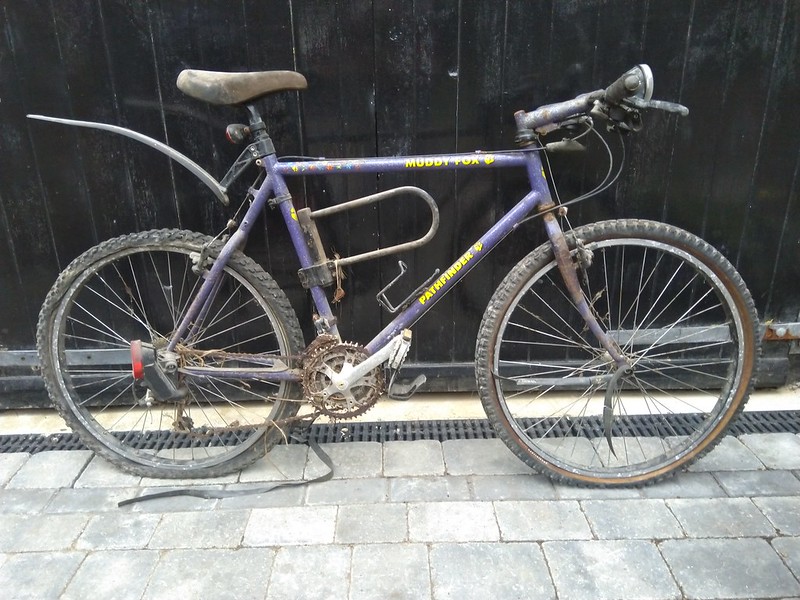 The cruddy phone camera actually makes it look better than it is, because you can't see where the paint has bubbled due to underlying rust. If I clean the rust (which I will), there's not going to be much left of the top tube decals.

Sugino crank and rings. The chrome is lost to us, but maybe there's life in the cogs yet? I have no idea what kind of mech that is! I only just noticed the sharkfin. 2 hour round trip justified! 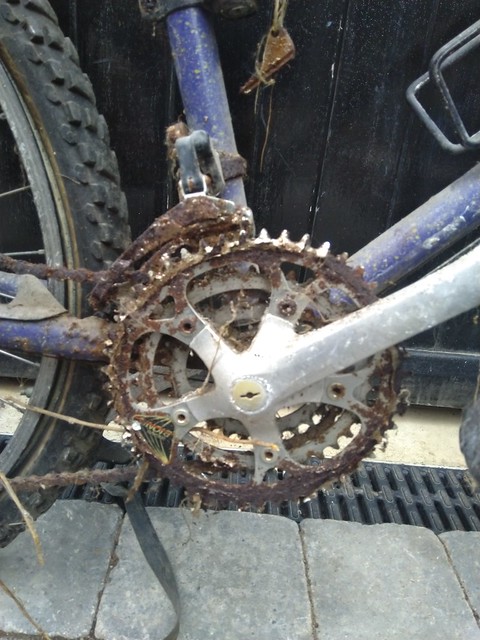 I reckon the BB will come out real easy, like. 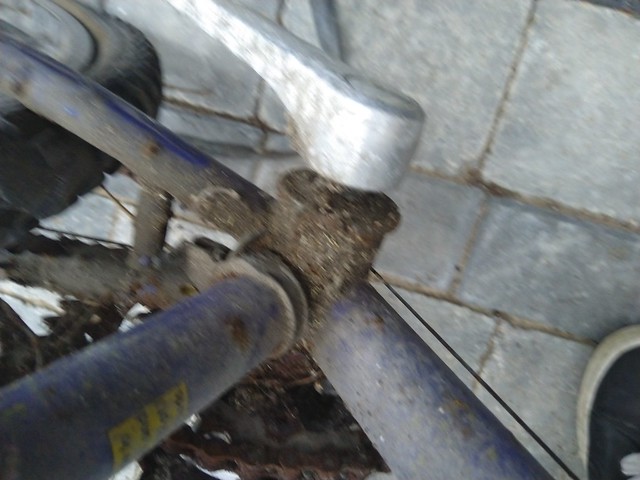 Shimano 200GS rear mech. That's not standard! The old lamps still have batteries in, so they'll be fun to open up. 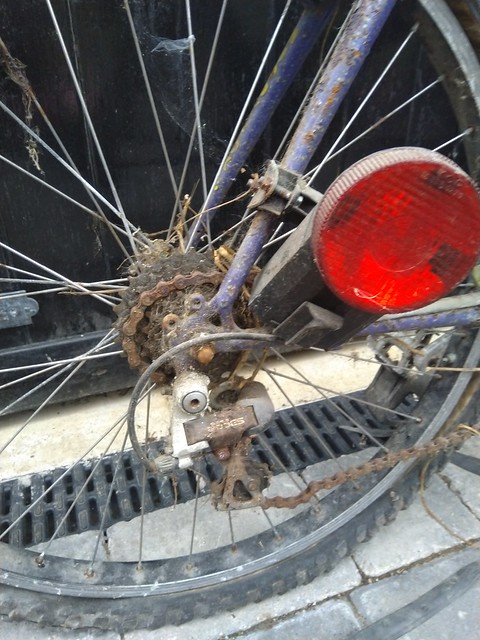 This bit worries me the most. If the rust has gone right through, is this expensive to fix? I'm assuming it's more than the frame's worth. 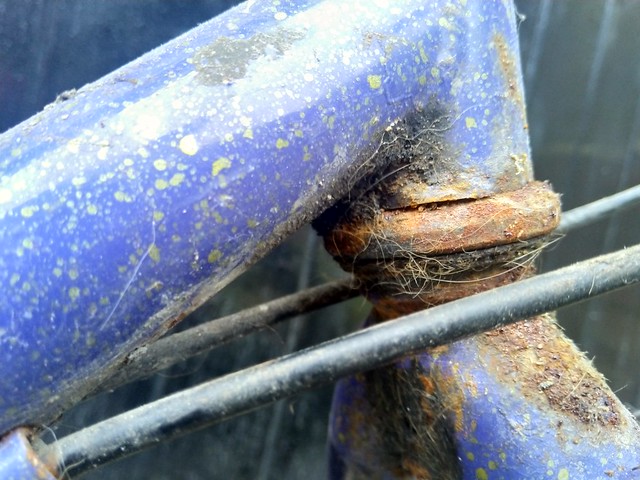 Deore LX shifters certainly aren't standard. Seems like a weird component, but it's all a bit weird. I might pinch these and stick them on my Scott Evolution. 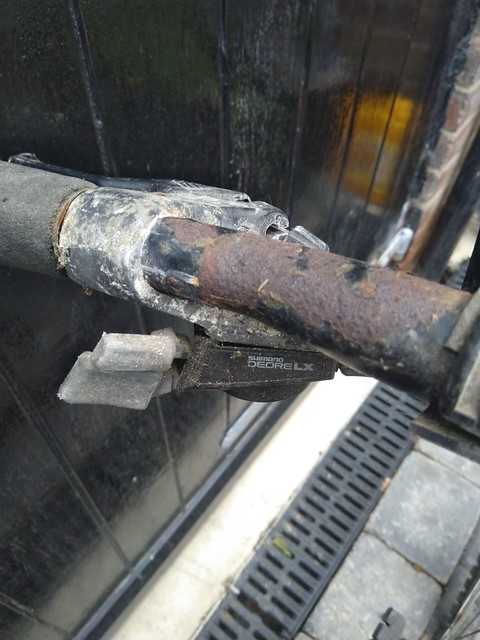 Other info? err.. the saddle and rims aren't standard, either. I forget what brand the rims are, but they're not an expensive one. I hope they're salvagable. I measured the distance from BB to TT, and it's 50cm, which is nearly 20". I think that's about the right height for me, altho I prefer a 19"

I dunno what the plan is after the cleanup. It'd be nice to get it powdercoated blue, like the other (better) Pathfinder colourscheme, but that'd cost more than the frame's worth. I guess I'll cross that bridge when I come to it. Maybe it'll be time to practice a rattle can paintjob!

I don't have any Sugino stuff in my parts box, but I do have some GS bits. I'm not sure if the numbers match up, and I think I'm missing shifters, but hopefully I can put something together.

If nothing else, trying to restore this bike is going to be a good learning experience.

I had a go at it in my lunchbreak, and got everything apart from the seat tube and BB removed. The seat swivels, so I don't think it's seized, but one of the hex slots in the seat bolt has rounded out on one side, and is just twisting in place without releasing the seat tube enough. I tried anyway, with my feet on the seat and pulling by the frame, and after 5 minutes of pulling and twisting I only managed to pull it out by 5mm, with a big silver gouge to prove it. I think it's angle grindin time!

The stupid bolt cap on the crank broke up (the slots trigger my koumpounophobia - I was really glad it broke up!), and left bits of plastic stuck between the bolt and the thread, so I can't undo the bolt until I've cleared the plastic. Boring!

I also tried clearing up the metal on the steerer tube, but it's inconclusive. I need to remove the race to get a better look at it. It might just be okay!

Orange 🍊 Fan
I was quite jealous when I saw your initial post about the free muddy fox, now I'm not so, but watching with interest... 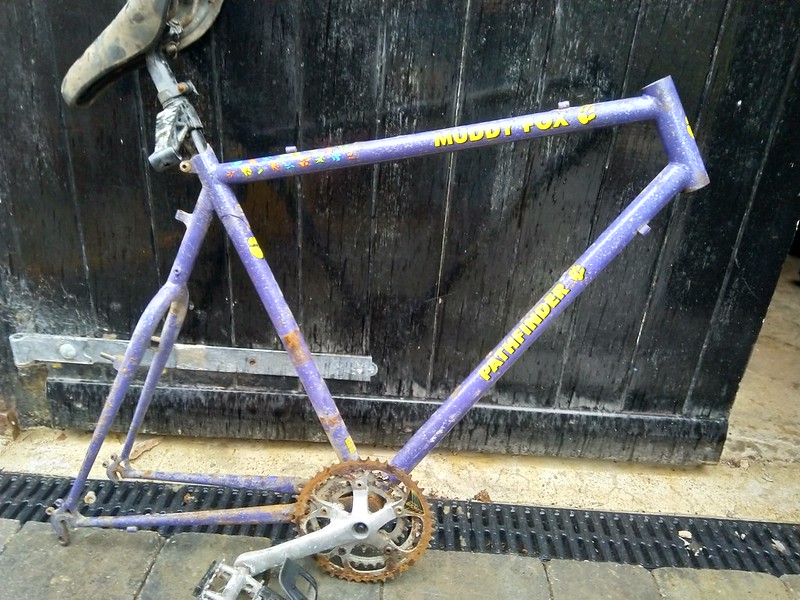 Slowly getting it down to just a frame. The drive side crank is a bit stuck, as I can't get my crank removal tool to engage the thread. As it's an aluminium crank, I could have at it with caustic soda if I run out of other options.. it was raining a bit, so I didn't want to get the extension lead out to power the angle grinder. That seat bolt will be toast soon! 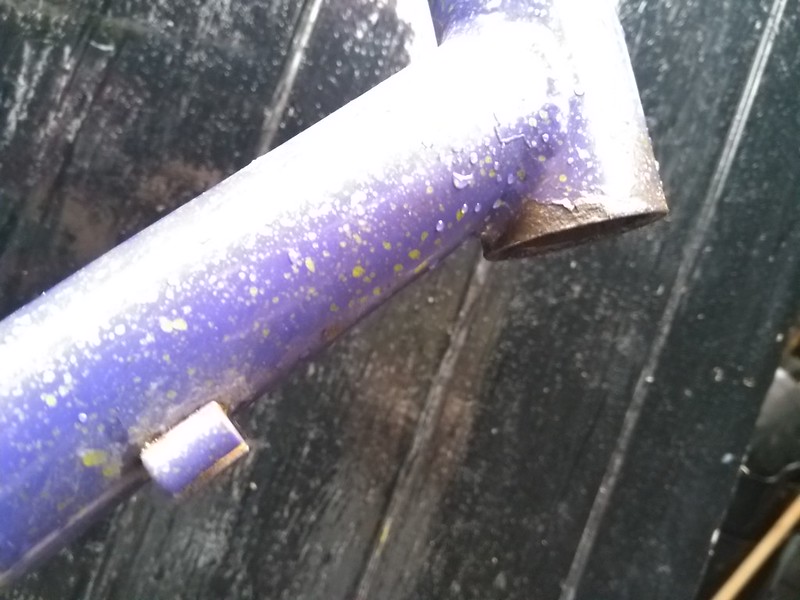 I took the races off, and the steerer tube doesn't look tooooo bad. There is a lump there, but I think it's just a weld. 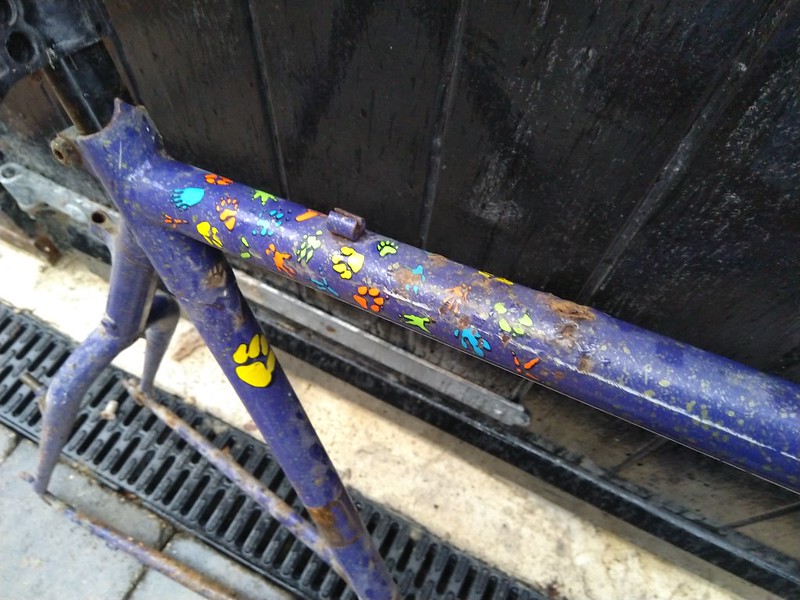 This is what I mean about the bubbling paint, although the photo (and decal) is still hiding just how bad it is. Poor decals - I really like the paws!

Tomorrow, I'm gonna smell like a chippy, as I attack the rust with white vinegar and some cloths.

Nice thread…. I’d be tempted to go down the powder coat route. Il sue Gil M on here will have the decals for it…

keeping it as it is or looking to fit drop bars into a 26er fat tyred gravel bike?

Having read the rattle can guide again, i don't think i have the time to respray it myself. i contacted a powder coater, and they said £45 for the frame, forks, and stem, so that's definitely tempting!

I had a go at the bubbly rust, just to see what was under the flaking. it was pretty craggy, but a fair bit of sanding got it to bare metal, and it looked okay. I'm not sure if a powder coater would remove all that, so I'm gonna sort it out myself.

now I've learned of evaporust, i think I'm gonna give that a try!

i also dismantled the handlebar, but had to cut the bolt on the stem to release it, as it had rounded. not sure how I'm gonna get the threaded part out now, tho.

Frame:
As park of pc process they will sand blast it. You could always ask to be called upon once this is done and prior to the powder being put on in case you need to repair any imperfections but if you ask nicely they may do this for you like they will on other things like alloy wheels etc depending on what their usual powder coating business is. At least this way you can do any filing and filling if they don’t to ensure the best result…

Stem:
You should be able to drill it out with a good quality metal drill bit and plenty of lubrication spray. Once you’ve drilled through the threads should collapse so that they can easily be removed. This can be time consuming. As you’re thinking of PC on the stem anyway a local garage may help you for peanuts and may use heat to remove it for you if you’re not bothered about that old paint anyway…
Id ask my local garage first before the drilling technique.

Here's the result of my rust removal yesterday: 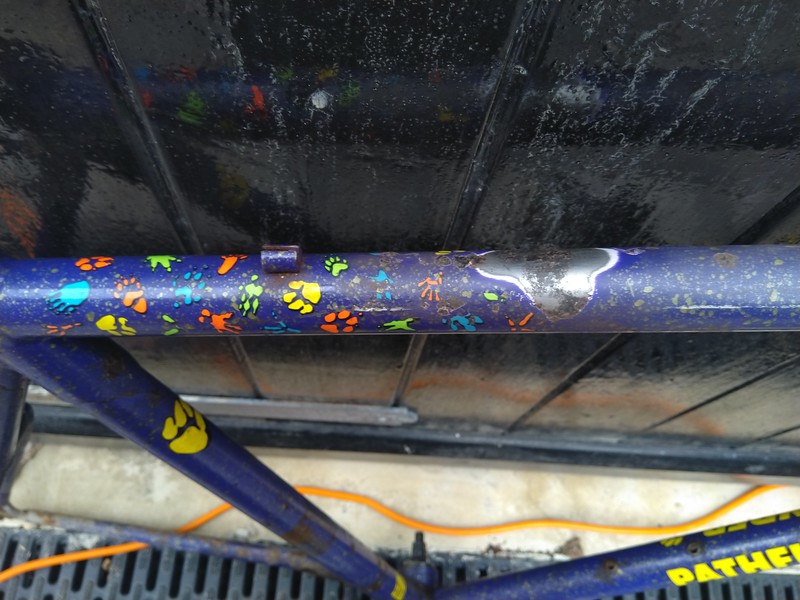 The metal's not too shabby underneath the flakeyness.

Today, I cut the seatpost bolt, and the seat is now off. Just the crank to go, and it's still resisting the extractor tool. I've tried strategically hitting it with a hammer, but that didn't work. I also tried taking off the other end of the shell, but that's also stuck fast.

At least I managed to drill out the remaining half of the bolt in the stem: 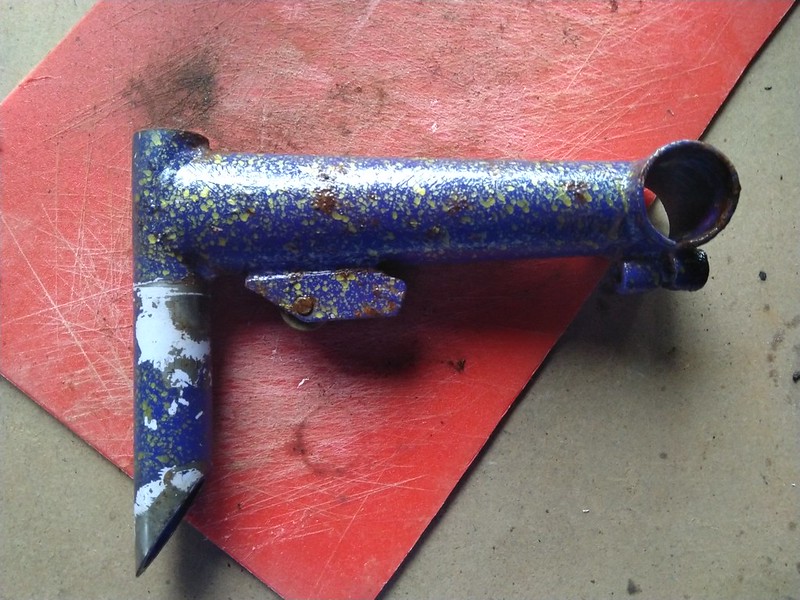 I only drilled in a little bit before it snagged and rotated the thread, so it unscrewed. Result!
You must log in or register to reply here.