Well, I’m so eager to build my bike that I figured that while largely inactive on this site I would start & document it with a build thread…

Not exactly sure if there’s a proper formula/format so I’m just going to kind of wing it as I go (the build to a lesser degree…).

Currently I don’t actually have the frameset in hand as I await it’s final return to me from paint & repairs. I still figure I have plenty I can keep myself occupied with in preparing for its return!

I got the bike early in 2020, fully stripped it down, cleaned off all sorts of different paints and stickers. A decent amount of paint was missing revealing that at some point the rear canti bosses had been removed in favour of a chainstay u-brake. The housing guides on the top tube for the rear canti were left in place, though a new housing stop had been brazed onto the downtube for the u-brake… in the process bubbling the decals in that area.

I built the bike up fairly quick & dirty after cleaning it up and rode it regularly as it was definitely no show bike. I knew it needed some attention, in regards to corrosion (or preventing it) and I got to the point where I realized saving the frame was a better initiative then saving what remained of the surviving paint.

The frame went in for a round of repairs, the u-brake posts and housing stop removed, and the rear canti mounts put back in place. A small dent in the top tube was rounded out & filled.

Next I thought the frame was headed for paint, but after removing the remaining paint a few pinholes were discovered in the tubing, proving my attempts to revive this frame were well in need! Back the frame went for another round of repairs….

Here are a few photos of the bike as found… then cleaned up a bit (excuse the initial saddle angle, probably a few beers deep and too eager as an excuse…) along with the 1986 Catalogue specs… 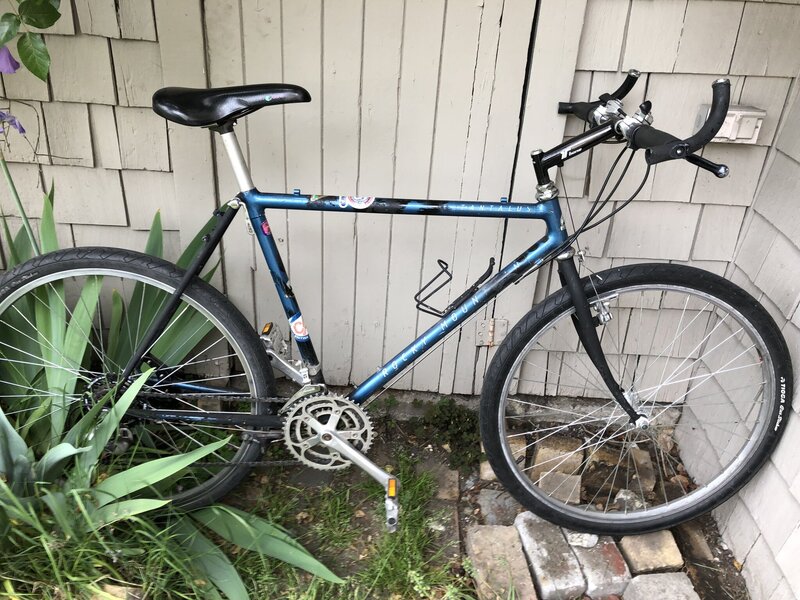 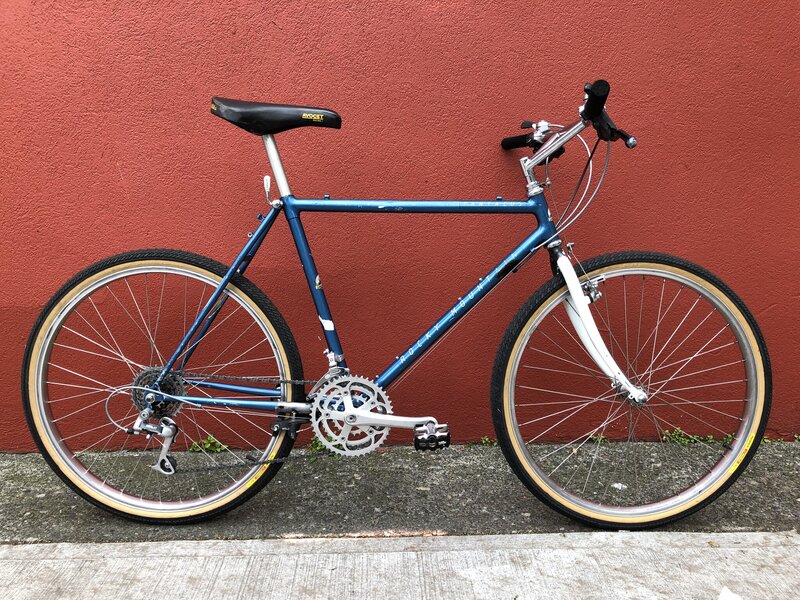 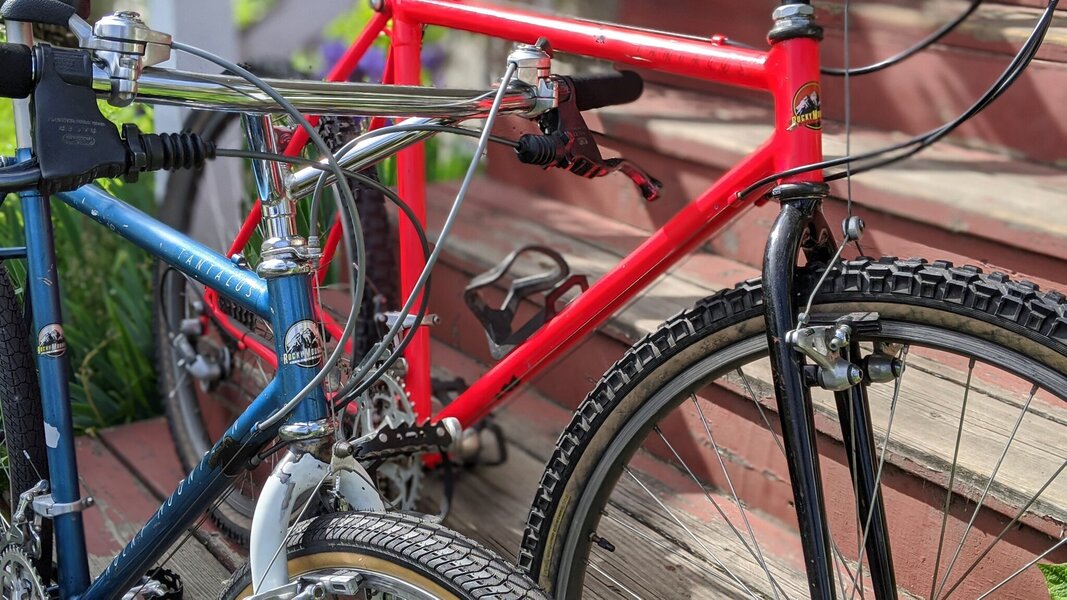 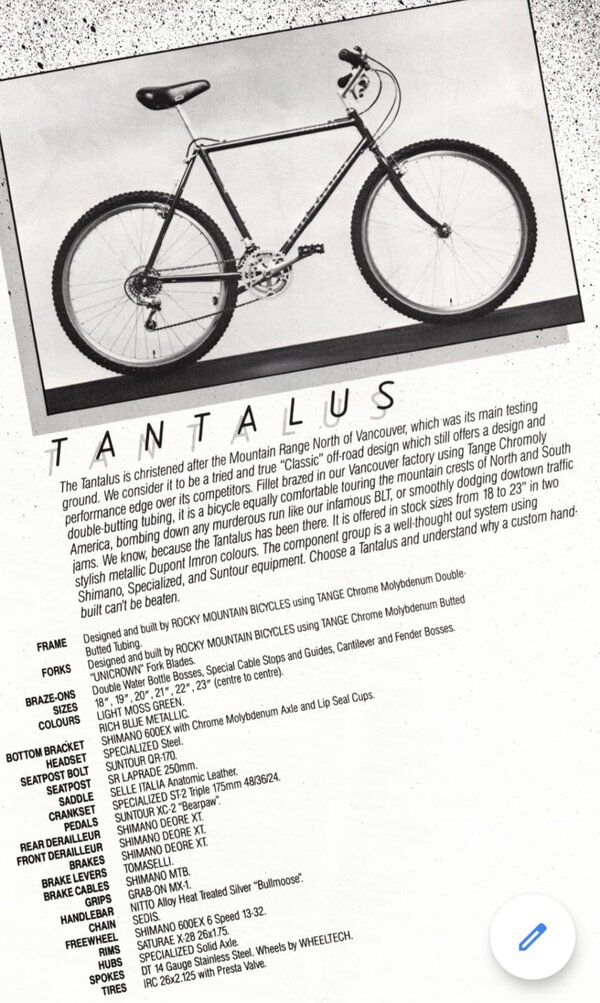 Nice. i have a1997 Tantalus project as well. Been plugging away at it on and off for years.
I will be starting a thread soon too.
How did you determine it is a 1986 frame? Mine has matching serial number and 1987
date stamped on the fork steer tube.

Retro_Roy said:
Nice. i have a1997 Tantalus project as well. Been plugging away at it on and off for years.
I will be starting a thread soon too.
How did you determine it is a 1986 frame? Mine has matching serial number and 1987
date stamped on the fork steer tube.
Click to expand...

I’ll have to check the fork steerer when I get it back from Toxic! I was going by comparison to the 1987 I had. That one had some differences in the frame, but was equipped full 87 Catalogue spec. This one sported pre indexed XT equipment w/ m700 Shifters, FD, Fr Canti, Specialized Headset, Cranks & BB, and the Tommaselli levers. I assumed 1986 after Paul Brodie left, potentially Lance Bohlen build, though with Lances passing earlier this year not certain I’ll be able to confirm that?

Yesterday I put the bars together, uncut very clean silver alloy Nitto bullmoose bars, a couple little extensions I fashioned for a touch extra width (some old inverse brake levers, an old stem and some hardware sacrificed for the cause) along with the m700 shifters and a very nice clean set of Tommaselli levers.

The excitement is building over here!

Lovely build. What a contrast between the before and afterwards photos!!!
R

I wasn't aware Harald had taken on an apprentice. Good for him to pass on the trade.
I have a few of the same components going on my build as well. Looking forward to
seeing yours together for inspiration.

Well this is lovely. Signing in for more updates
You must log in or register to reply here.