Claud Butler Fan
It’s been very frustrating trying to find a set of suspension forks with 1” steerer at a price I can afford—I think I found the end of the internet the other day…
However, a lovely bloke in the U.S. has posted me a very reasonably priced, good quality crown with 1” steerer and (handily) stanchion clamps so that I can easily fit my (reasonably good quality) Suntour “bottoms” which are currently undergoing an overhaul.
Getting the stanchions out of the their original non-clamp crown was the next hurdle.
Any percussive force was immediately removed from the equation, as was pulling, pushing, twisting and my old stand-by—cursing with clenched fists directed at the offending part.
I will say at the outset that while this process doesn’t look pretty, it was undertaken with the utmost care. I spent a quarter of an hour on each stanchion, gently and gradually shaving away the crown alloy until there was less than a millimetre between the bottom of the groove I’d cut and the stanchion—at which point a couple of twists of a large bladed screwdriver split the crown leaving the stanchion to pretty-much fall out, completely uncompromised by the process.
It’s important to note that this painstaking process would have been pointless had I not found myself a crown with clamps rather than the usual press-fit. 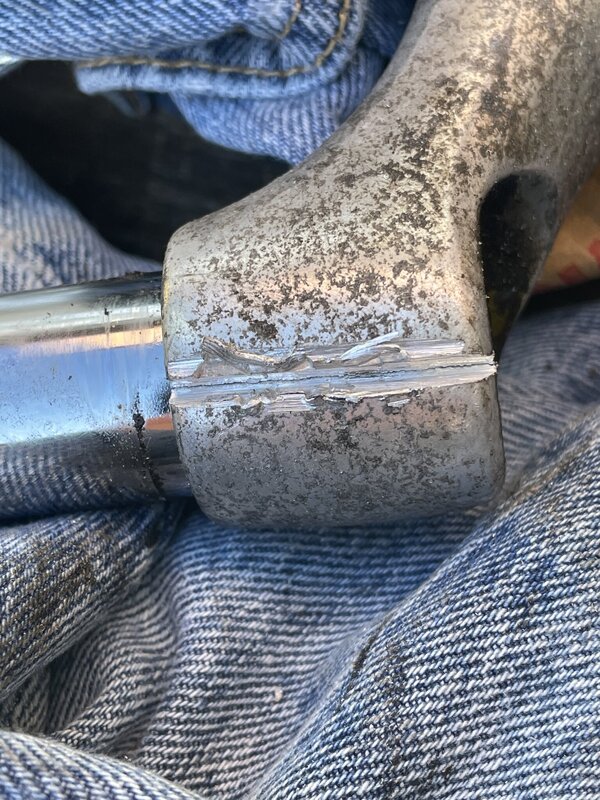 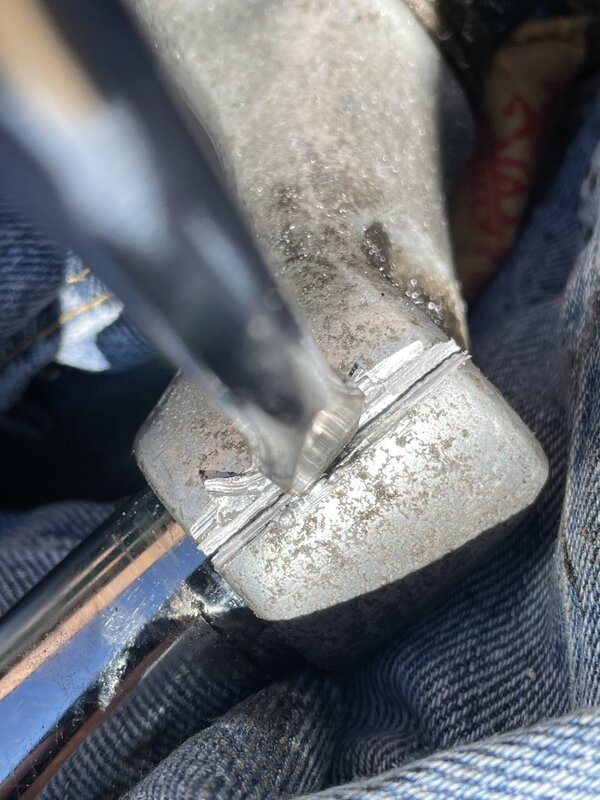 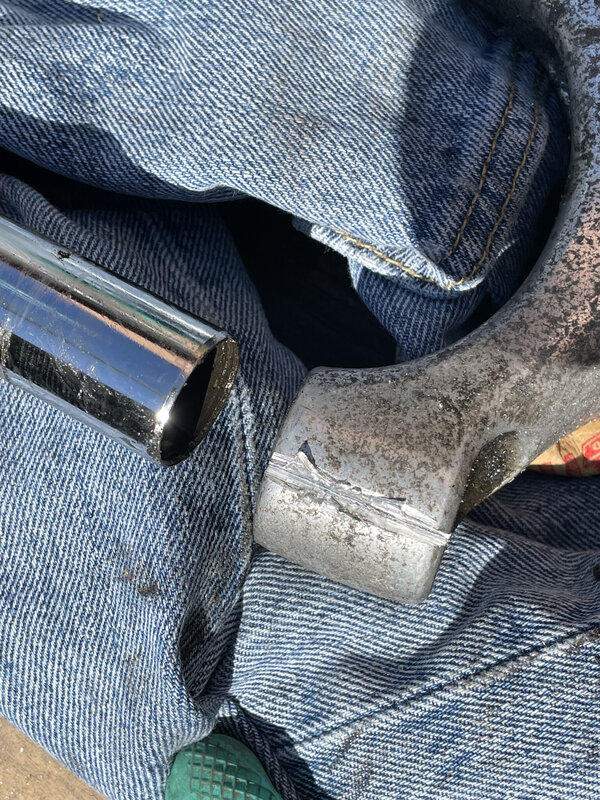 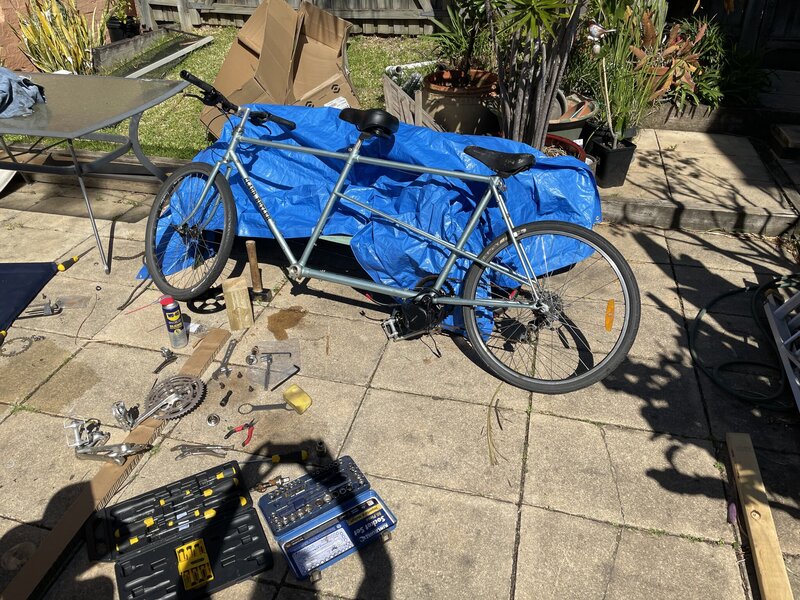 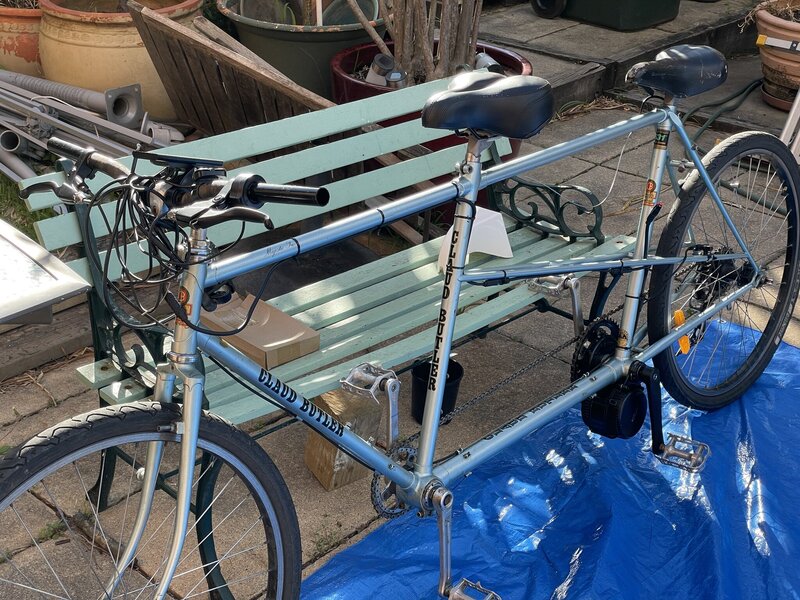 Turns out that contrary to most of the posts I’ve read there is not enough clearance on the left for the original gear ring so I’ve moved it to the right for the time being.
It’s a mess at the moment but the Bafang kit works a treat.
Anyone who thinks they need more than 500w as an assist is out of their minds. I’ve only dared going uphill so far (no time to fit brakes…) but this thing pulls away plenty fast enough with assist on 1 (out of 9).
More to come as I tidy it all up.
W

I have a torque sensing tongsheng tsdz2 in the shed waiting for an appropriate bike.

Wonder if that would work on a tandem!

Be sure to fit the brake lever cutout switches, you don't want to be in the situation where the pilot is braking for an emergency and the stoker is still pedalling.

I have a torque sensing tongsheng tsdz2 in the shed waiting for an appropriate bike.

Wonder if that would work on a tandem!

Be sure to fit the brake lever cutout switches, you don't want to be in the situation where the pilot is braking for an emergency and the stoker is still pedalling.
Click to expand...

Thanks was8v, apart from the clearance issue (chain ring) it was a pretty easy fit. I like the idea of the torque sensor on the Tongsheng, you should seriously consider it for the tandem.
The kit I bought came with a kitchen sink—very comprehensive (including extension cables and brake levers with sensors built in), but no instructions at all. Apparently they’re online somewhere, but I found the few questions I had were answered by google/youtube.
I’m now looking at getting a mini-under-the-handlebar shifter to make up for the loss of the one that was integrated into my old brake lever.

Claud Butler Fan
Still waiting for suspension forks (by mail....) so the front end isn't much changed, but the rest is coming together. Much tidying up and adjustments still to be made, learning slowly as I go.
The 26inch wheels have made the bike feel much more stable. This is important for my wife's sense of safety on the road and became necessary almost from the get-go. It feels like a limousine to ride now, long and low. The suspension forks should increase this impression.
I'm still considering shorter cranks. The standard ones are a bit too close to the tarmac on the downstroke for my comfort, though I haven't scraped a pedal yet. 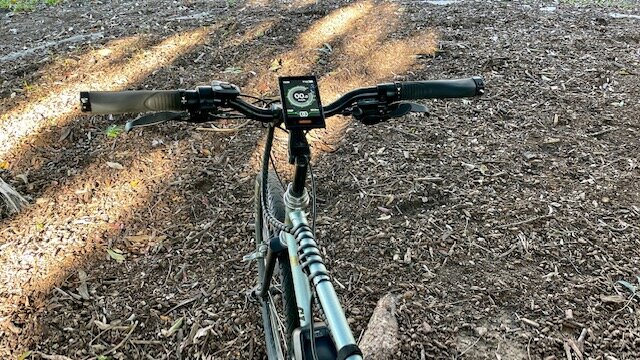 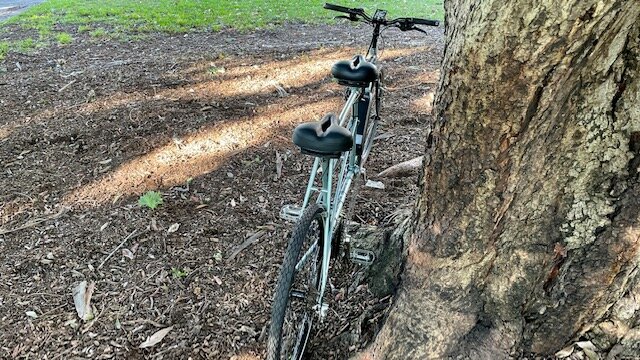 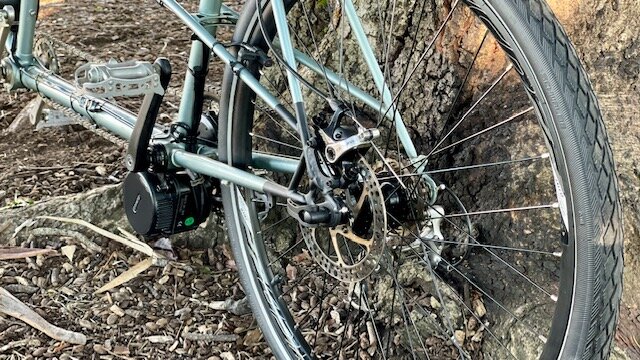 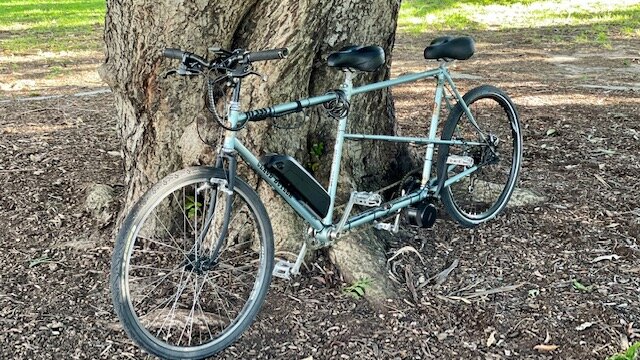 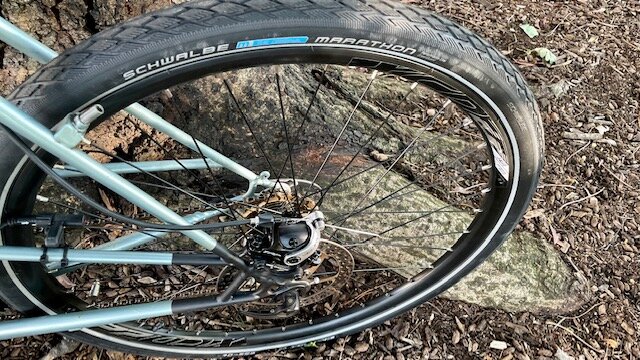 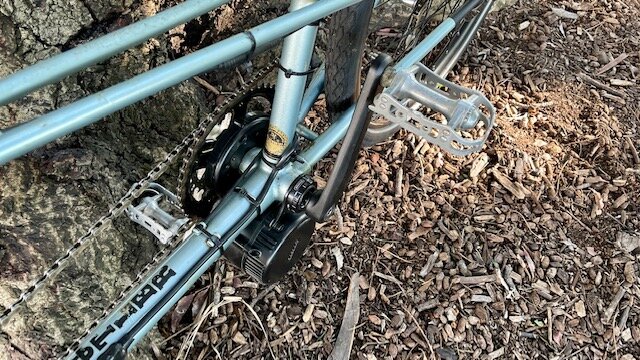 Love it, but would have liked some chat about the disc conversion

Peachy! said:
Love it, but would have liked some chat about the disc conversion
Click to expand...

The disc came out of the blue Peachy!. I spoke with a local frame builder about repositioning the lugs (font and back) to suit the 26 inch wheels and took the bike down to his workshop so he could have a look. He said it wouldn't be difficult but he couldn't do it for a week or so due to other work (he also said his first bike was a Claud Butler!).
Then when I did take the bike down to have the work done he asked how I felt about a disc on the back. He said that rather than messing with the lugs at back he thought it would make more sense to strengthen the frame and mount a disc calliper.
I got the feeling it was a case of the lesser evil in terms of frame integrity.
I agreed as I had already bought wheels that happened to have rotor mounts, and I had an old rotor and calliper - though, as you can see from the photos I decided to make as good a job as possible and splashed out on a new calliper.
Once I'd finished fitting the new wheel and braking gear today I didn't have much time to bed the pads in. The manufacturer says it can take a while. After a short ride I could feel the pads starting to bite but I think there's a way to go yet.
To be honest, if it wasn't for the necessary change of wheel diameter I don't think I would have bothered with the disc conversion.
Having said that I am tossing up whether to go for the disc when I fit the suspension fork. It's a much easier job (lugs already there) but Sean (frame builder) said to consider the possibility of extra stress on the steerer tube.
Sean builds competition bikes for a living so I understand his point, but I'm not sure that under normal conditions there would be any extra braking stress at all.
At this point I'm open to all thoughts on the matter.

The only likely occasion for extra stress is if it “gets away from you” on a steep descent, fully loaded. If you take care this sort of incident should be almost nonexistent

Claud Butler Fan
While waiting for the suspension forks to arrive in the mail my next job is to find a set of 140mm cranks - for extra clearance - and (hopefully) refit the front pair of chainrings back on the "right" (left) side of the frame.

Claud Butler Fan
We’ll, it’s not “finished” by any stretch of the imagination, but it now has many of the bits I wanted fitted and operating more-or-less how I expected.
Will add more detail and answer any questions in the next day or so. Right now having too much fun. 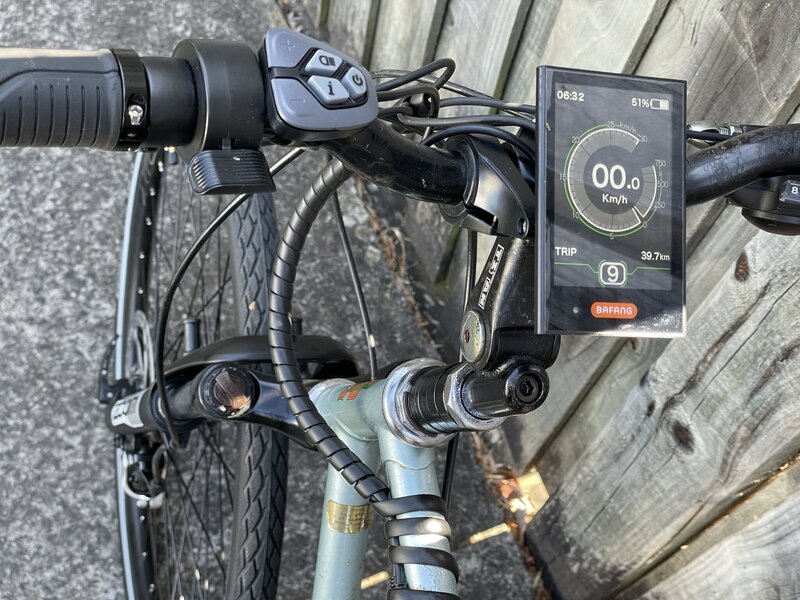 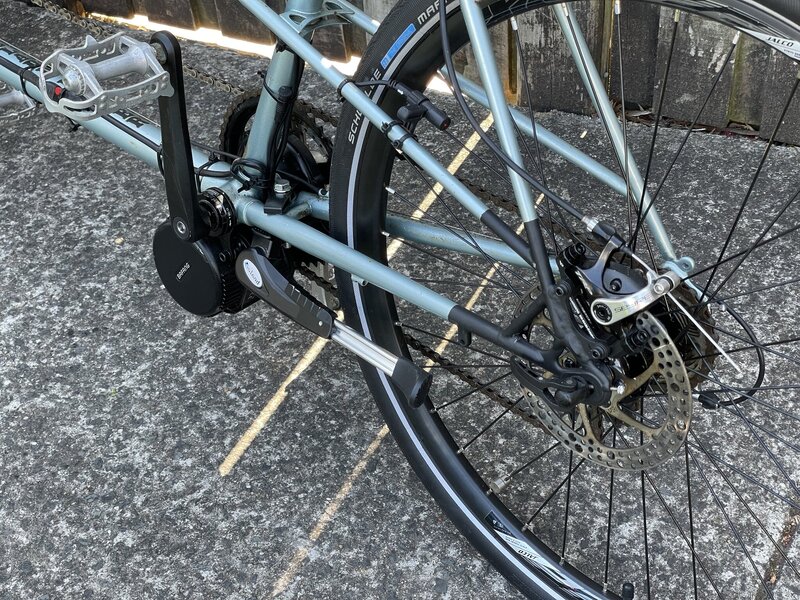 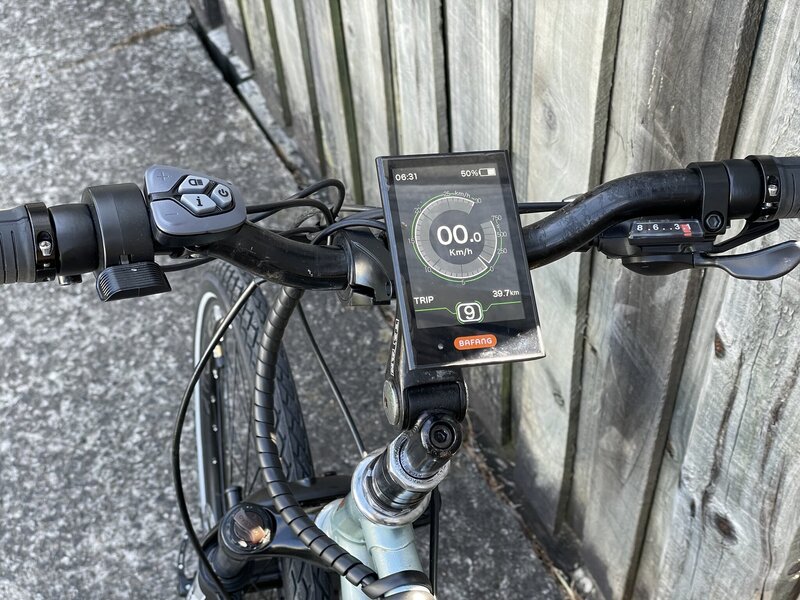 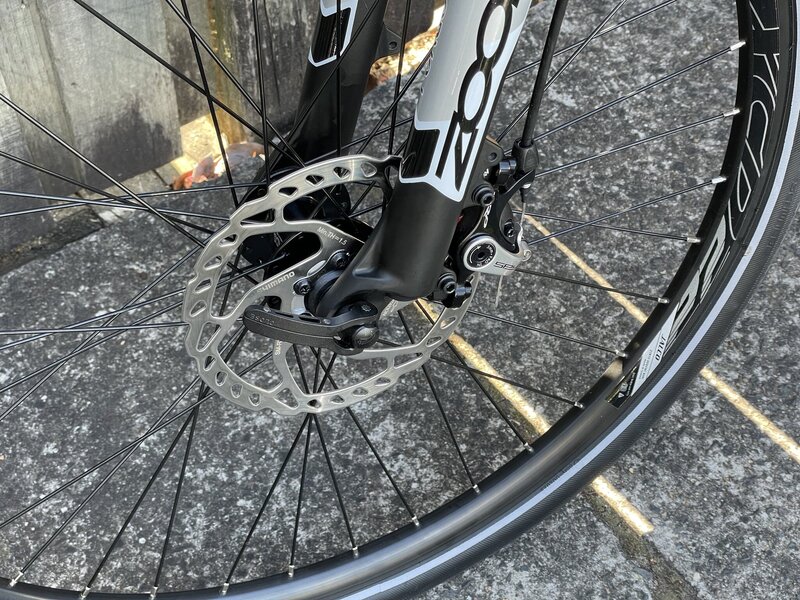 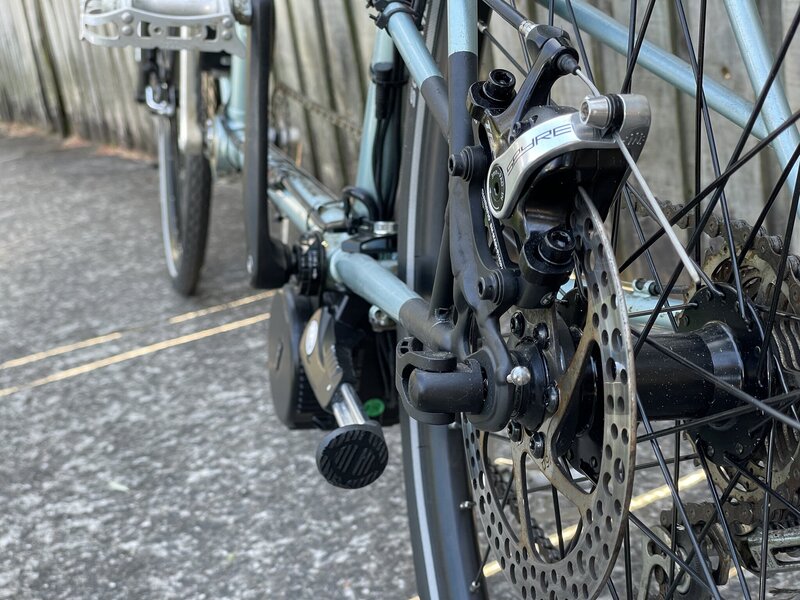 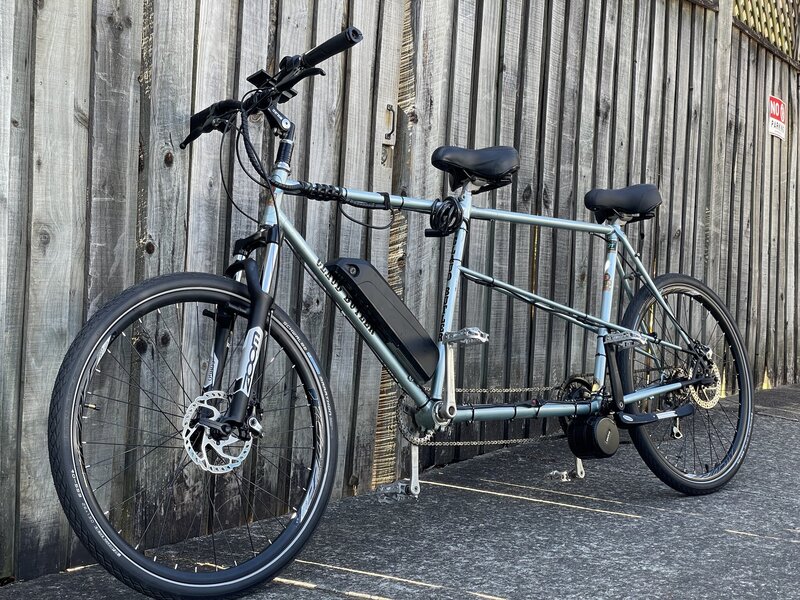