That makes sense. I think the '82 Ridge Runner was available in both colour schemes, unless they switched between them from '82 to '83. So the Mean Streak was basically the Ridge Runner, whereas the Ridge Runner II was completely different, with a lugless frame.

Hopefully I'll get to do some work on mine at the weekend, though I need some more degreaser to clean the bottom bracket before I can get much further.
F

hmm i wonder if the Ridge Runner II came out in 85..

Anyway, it doesn't seem as though it was the natural successor to the Ridge Runner - it was apparently made of different, non-Tange/Champion tubing and weighed a lot more(!) so it sounds like a lower offering than the Mean Streak.
F

There's a Ridge Runner II frame on ebay right now.. I contacted the seller and asked him if he would tell me the serial #.. he said he'd let me know over the weekend. The SN should give a hint to when the frame was manufactured

Excellent - if it's the same format as my Ridge Runner the year is obvious.
F

yeah, in general the first number is the year and the first letter after that is the fortnight. They follow the same format as Centurion road bikes

The Ridge Runner II has the Diamondback logo which resembles the DB logo from 92-94. In 1985 the DB Viper has the newer script style logo which was used in 86 and 87 as well.

Well, after a critical failure in my Richter 8.0 build I'm now trying to work out whether I can get this finished in the next week to take on holiday with me.

I should have most the parts I need, so it's certainly possible. I spent the whole of today touching up the paintwork on the frame to protect it from rust and cleaning up most of those parts.

I've realised that the bars came with and without an inbuilt canti hanger and the one I have do not have one, so I'll need to get one (I've looked through my spares but not found one yet). I'll also probably want to get some canti bridges, as I don't think I have any matching pairs.

I have got a set of these Psycho-esque tyres:

Which will allow me to use it off road if I can get it all built up.

Originally it would have used a Suntour Superbe Tech L rear derailleur, which was front pull, but I'll be using either a Suntour Vx GT or a Suntour Mountech GTL, both of which are rear pull - it shouldn't be a problem to route the cable round to the rear with some cable outer should it? Does anyone have any opinions as to which is the better mech to go with?

Another worry would be whether the seat post will be long enough, but if I get to a point of finding that out I'll be doing quite well - I can't remember whether I have any other 26.6mm posts I could use if it is.

If I can get it finished, it won't be exactly as I planned - I won't get a chance to try to straighten out the pedals before then, so won't be able to service them, but so long as it's rideable I'll be happy and then I can always fine-tune it once I'm back.

Almost there after today, just waiting for a few more bits to arrive: 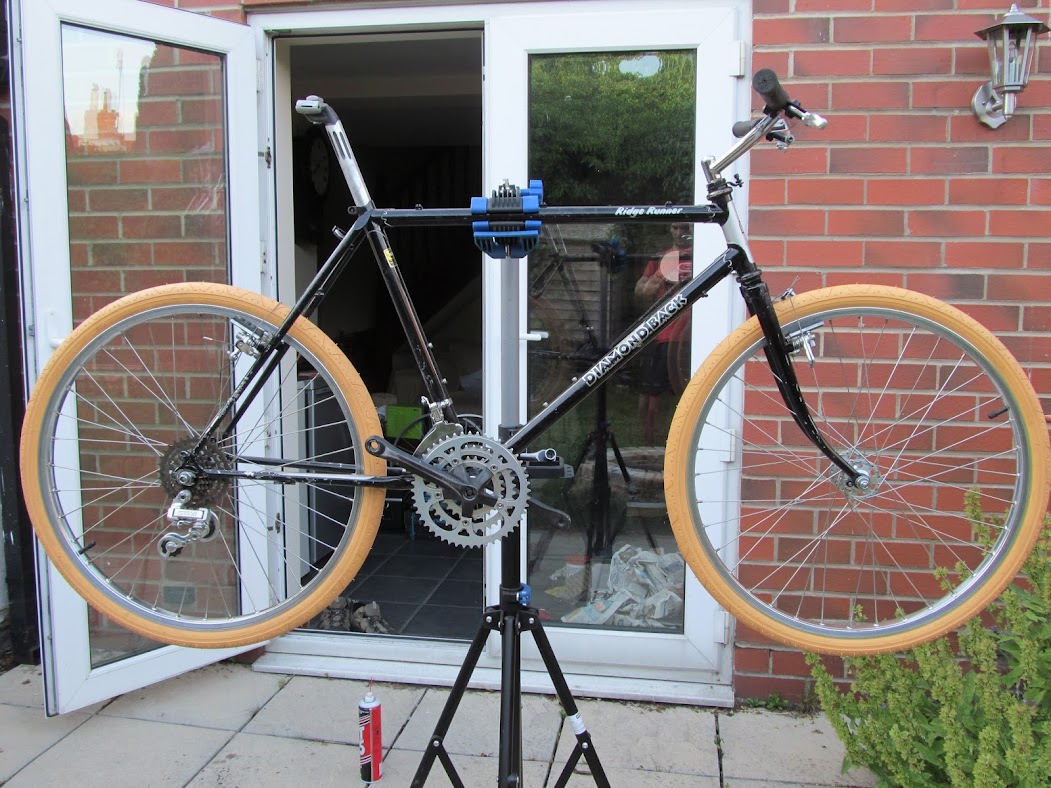 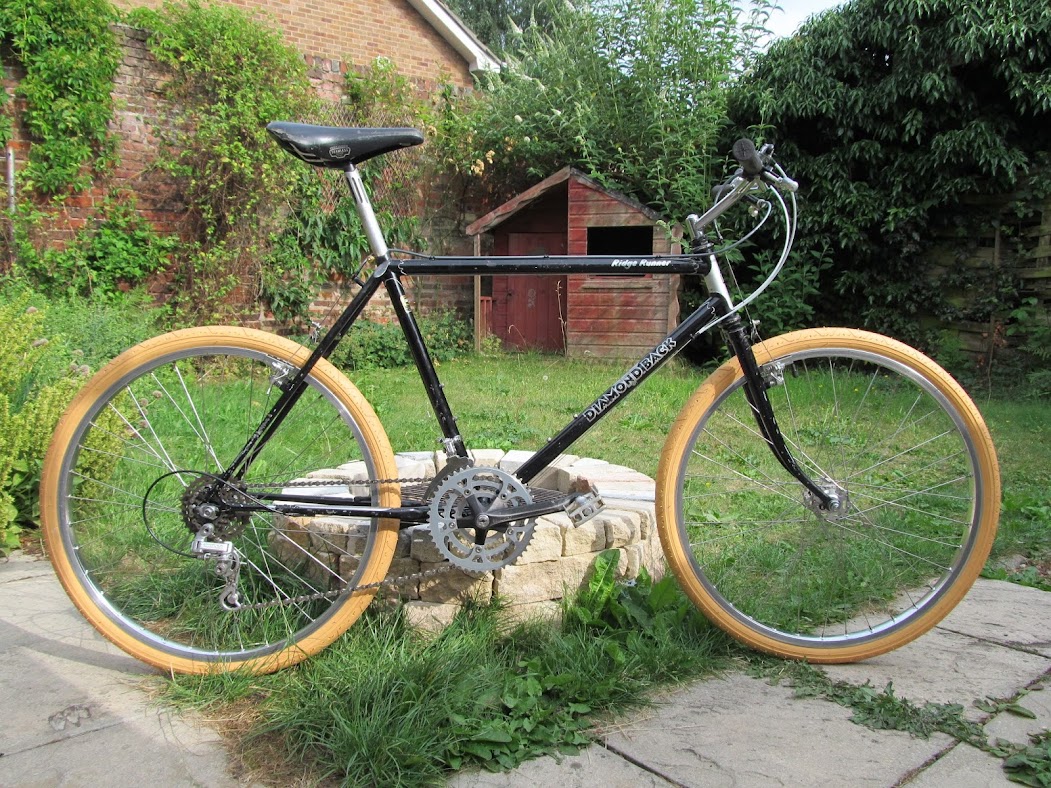 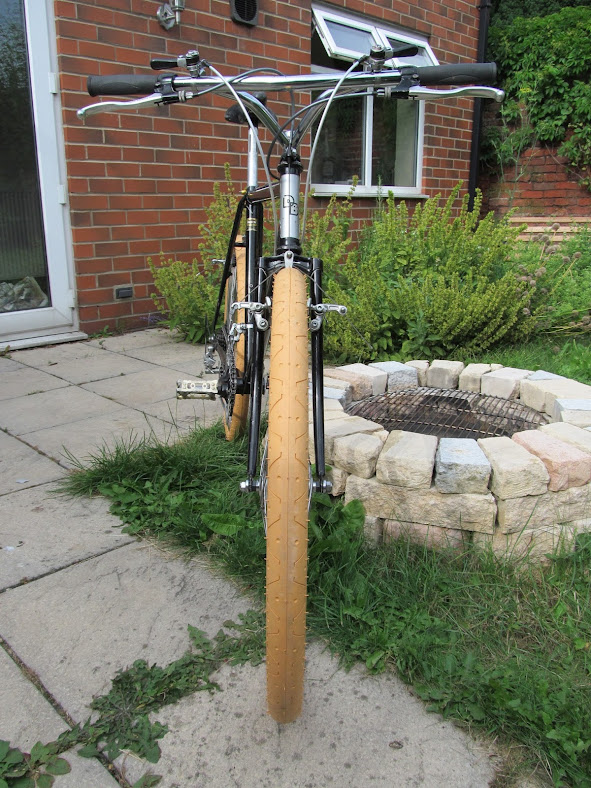 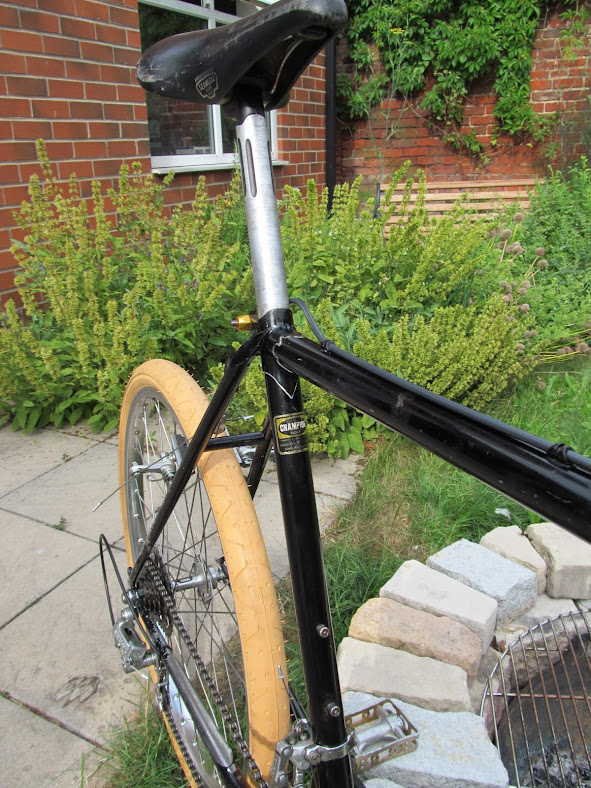 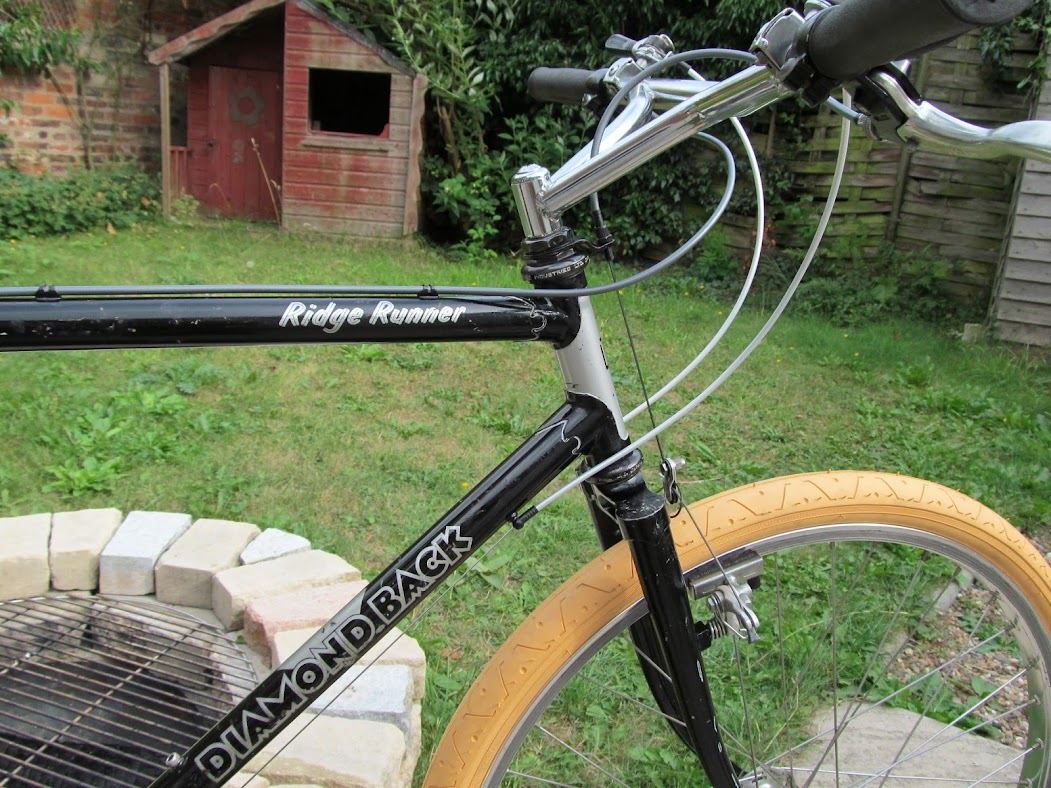 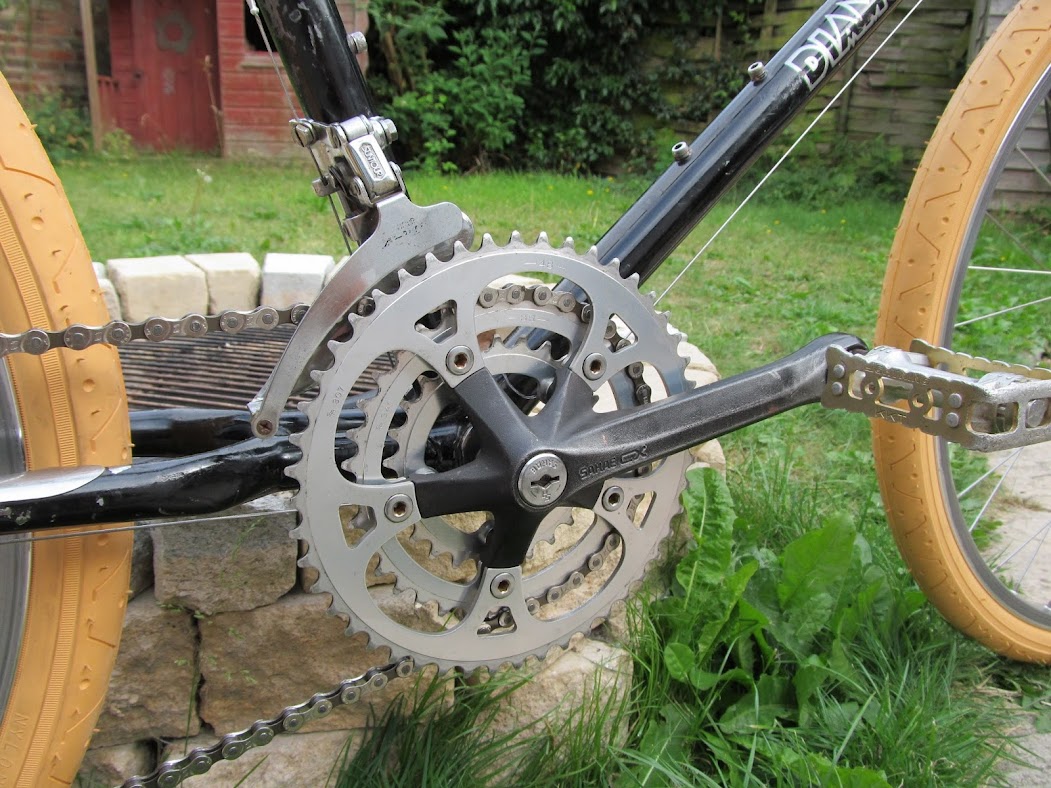 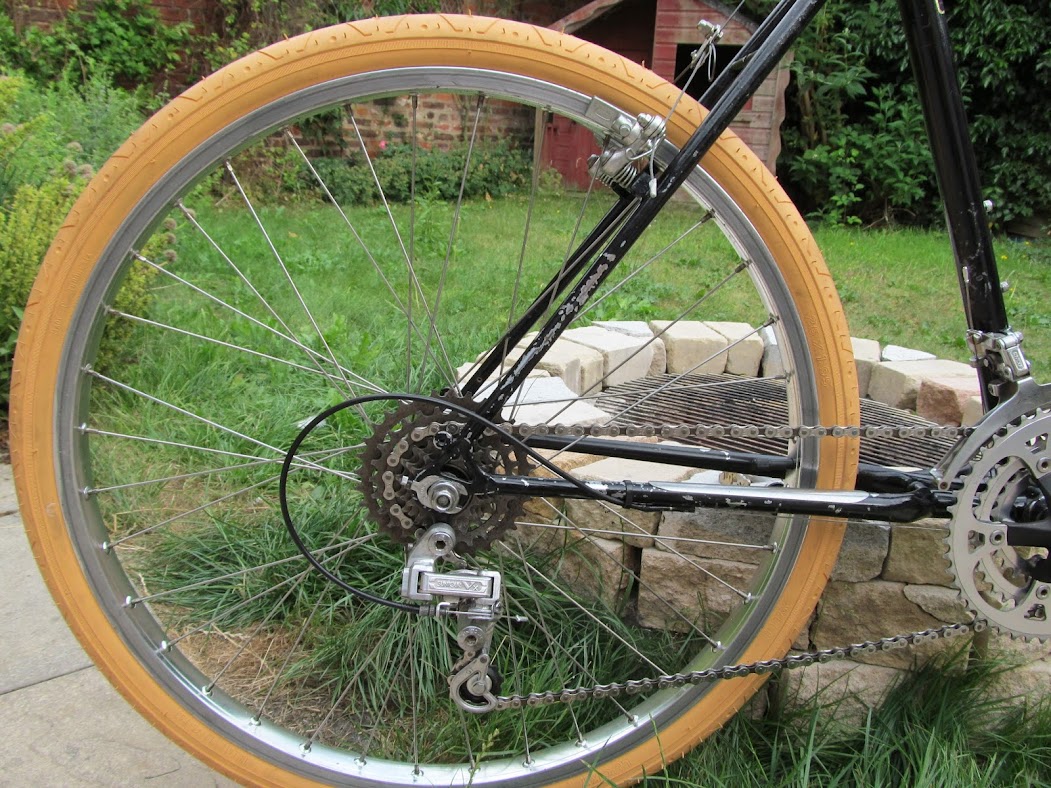 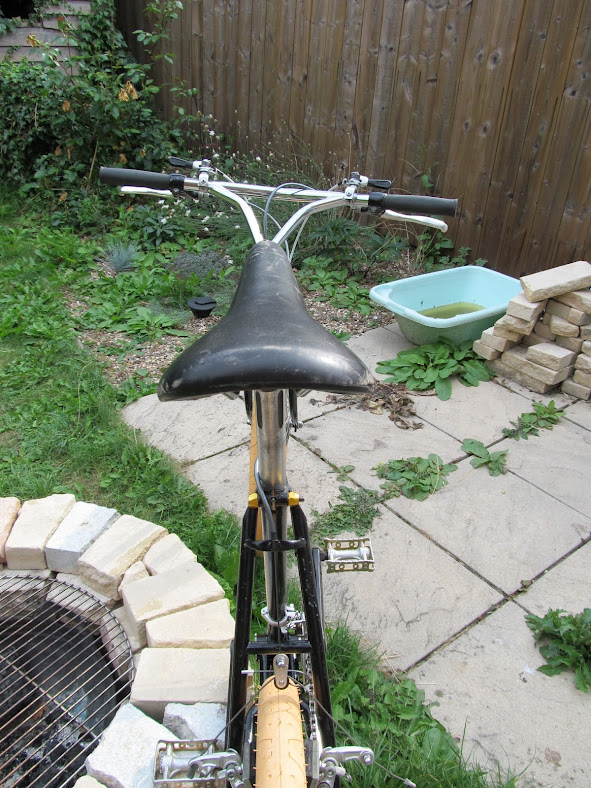 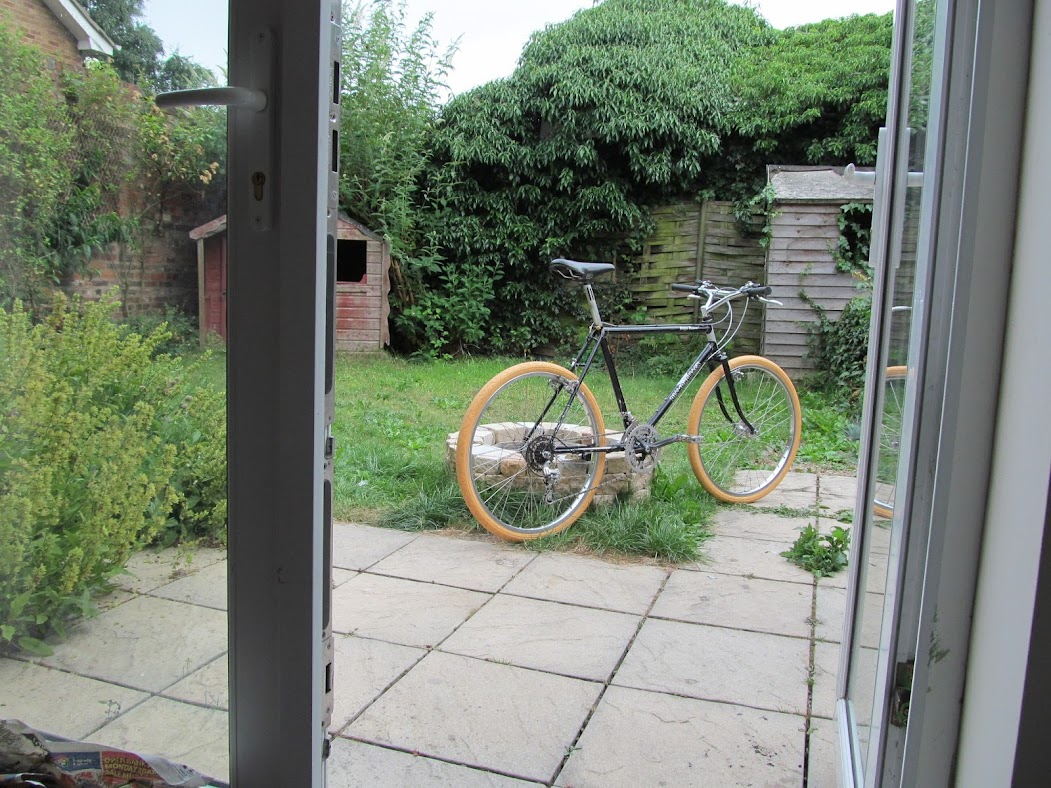 I'm planning to take it out for a test ride on the roads and then change the tyres to see how it goes off road, so hopefully I'll get some more photos then too.

There's a few things that aren't quite as I'd like them, I need to reshape the end of the pedal cages to their original curve, which will allow me to service the bearings.

I weighed it and was pleasantly surprised. It's certainly no lightweight, but isn't the heaviest bike in my house and probably a kilo or so lighter than I expected.

So here's the specification sheet as it stands:

I'm really pleased with it so far. I think the butterscotch tyres work well, though I think it might look better once the grey Kenda tyres are on it. Feel free to disagree, I won't be offended!
You must log in or register to reply here.