Here are the frame and forks and original wheels: 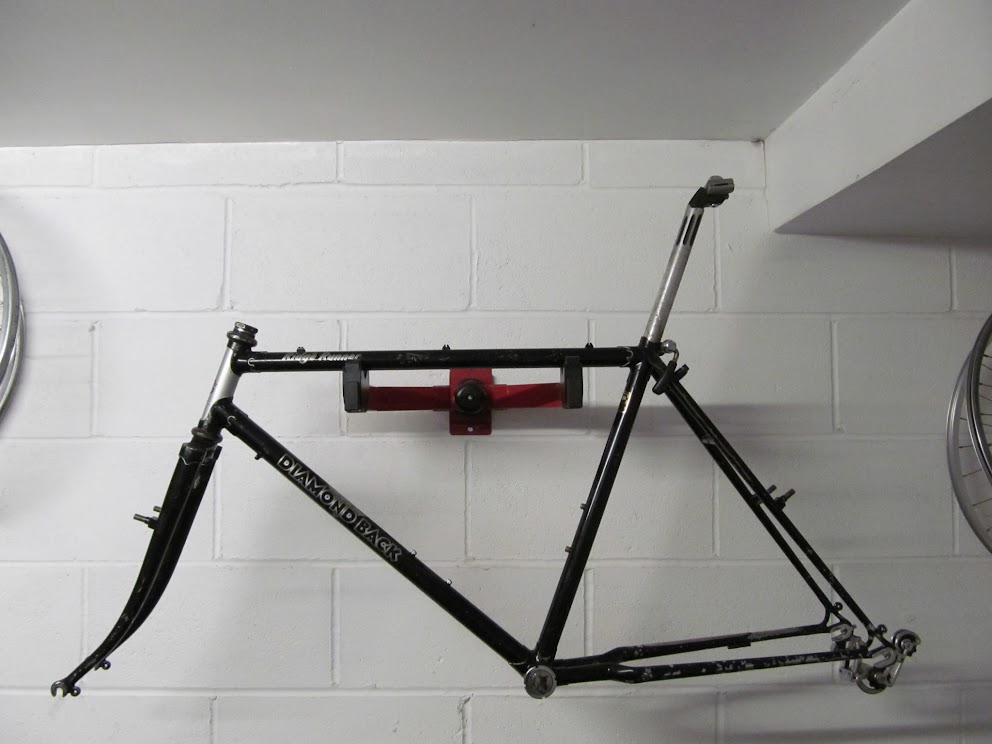 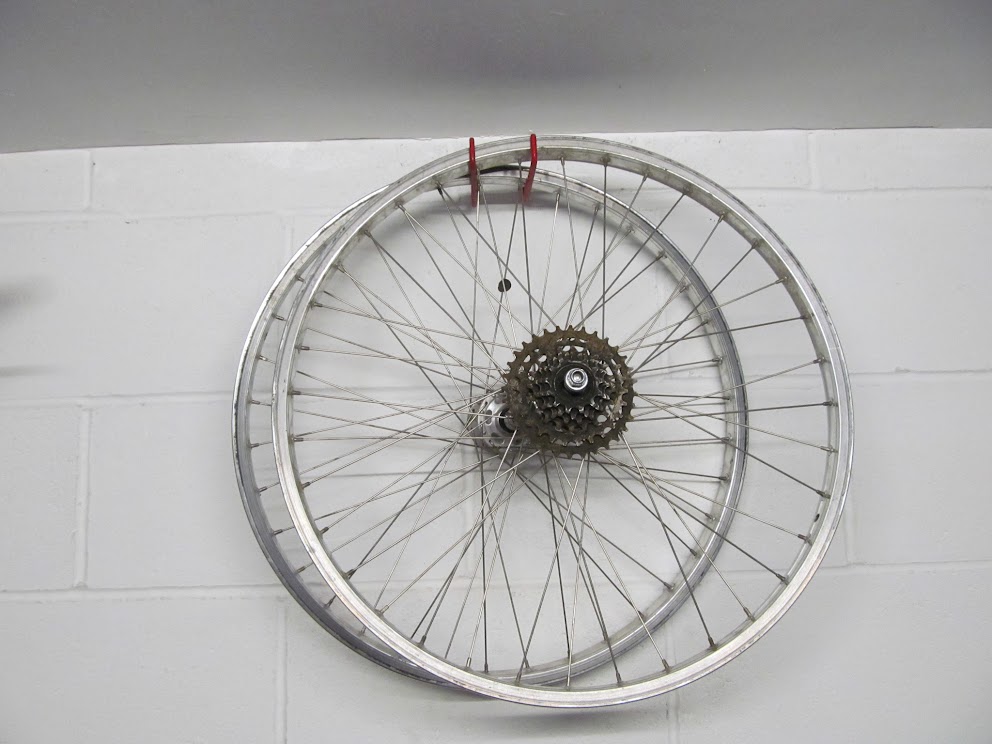 I still need to strip and rebuild the headset and the bottom bracket is near seized, so I'll have to sort that out, probably keeping the original but replacing the bearings I imagine.

I also have almost a full bike's worth of parts that I am led to believe came off an '85 GT, though I cannot verify that. I bought them because they included the same Dia-Compe brake levers and cantilevers that would have been originally fitted on the bike, but I may end up using most of it on the Diamond Back: 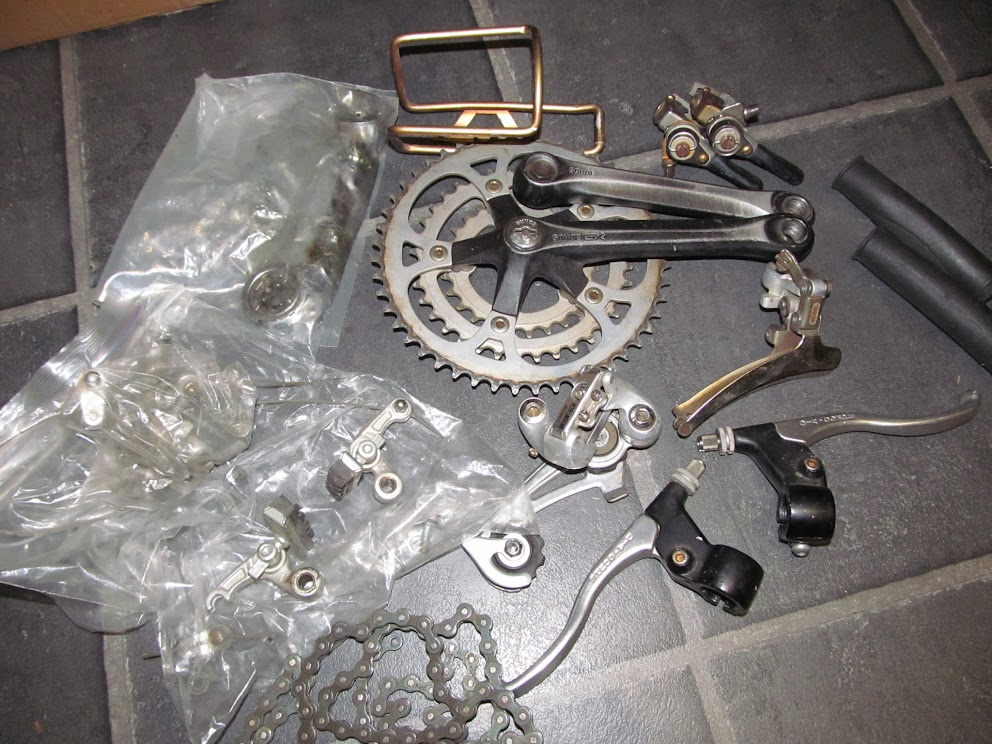 The Sakae CX cranks have really grown on me, so I think I'll definitely use them, unless I get hold of a Sakae CR crankset.

Given the Suntour XC Beartrap pedals that were original spec on the bike go for almost as much as I paid for the frameset and wheels I decided I needed an alternative and came across these rather abused KKT Lightning pedals: 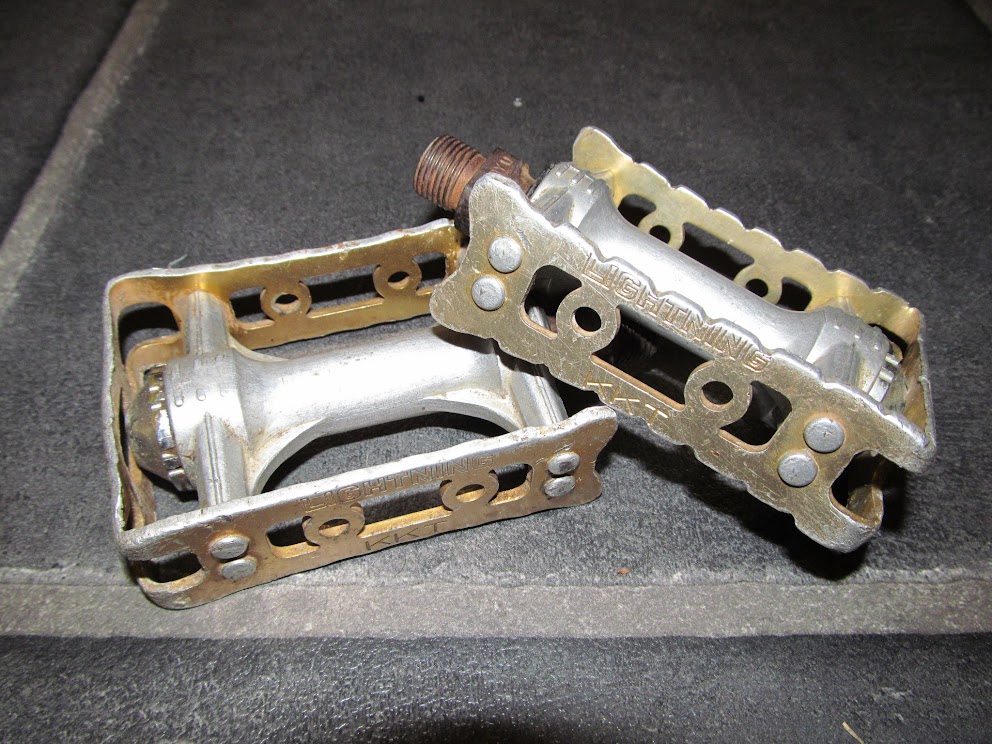 They were in a much worse state, but I've cleaned them up a little. I still need to try to return the cages to their original curved end shape and properly refurbish them. I really like them though and think they'll look good on it.

In terms of the overall build, my initial instinct was to build it up to original spec. I have the original spec in paper form, but not digitally and I can't be bothered to type it all up now, but I will add it at some point.

The more I thought about it though, the more tempted I am to deviate slightly. For example, the Sakae CR crankset wasn't released until a few years after the bike, but I love the look of it, so I'd be tempted to go for that as an upgrade on the original Sugino AT cranks. I'm also happy with the pedal choice, despite the initial reason being cost-saving. I was going to buy a Suntour Superbe Rear Mech to go with the original fitment, but having read reviews of them I'm tempted to either go with one of the mechs I have or choose another alternative. I'll definitely stick to early to mid eighties parts, but I think I probably won't be bothered about being more strict than that.

The biggest problem so far is the bars. I would love the original bullmoose bars, which have a diamond-shape and I think were especially made for Diamondback, but since the bike came without them I suspect my chances of finding replacements, in any condition at all, are very, very slim. So I suppose the obvious solution is to get alternative bullmoose bars, though I've been trying to get some for awhile now with no success. An alternative that has crossed my mind would be to either find or get made a lugged stem and have it painted to match the frame. This would obviously deviate from the original look a bit, but I really like the look of lugged stems and I feel if I can't have the unique original stem/bars then maybe it would be a nice touch to have an alternative unique solution. I'm not sure.

Anyway, it'll be a slow project, but I hope to get it build up this year, even if it's built with the intention of replacing parts when I find more suitable replacements. Any comments, opinions and suggestions gratefully received as always.

your part collection is pure classic, I really like all of them ...and definitely this bike needs a bullmoose ..no ifs, no buts!
M

My kind of build this!
Pulling up a chair

Given the parts I have already, this really shouldn't be long until I start building. The only real issue/decision with be the stem and bars. I've been looking out for a bullmoose bar, but every one I've seen so far has been in the US and the postage alone is too much!

The plan is to get it built though, then slowly change parts as and when, so hopefully I'll find at least a temporary solution.

I've been thinking about the tires. Ideally, I think cream/butterscotch/grey tyres might look best on it, but since I'm not keen on forking out a lot of money on NOS tyres that might limit my options.

I'm still not sure on usage, I will definitely be taking it off-road, but may find I use it more on the road in the end. I was considering Schwalbe Fat Franks for the road, but they're really quite fat, so might look stupid on the frame. Off-road, I was thinking of trying the Kenda psycho-lookalikes which come in a light grey.

Any views on tyres?
M

I originaly built my 1987 Jamis up as a sort of beach cruiser, and fitted Nokia City-runners to it..... http://www.retrobike.co.uk/forum/viewto ... ight=jamis
Bike has changed a lot since those pics

That's a good idea, something slimmer like them might be good, especially skinwalls. I had a pair of those on my Karakoram for awhile, or certainly similar ones made by Nokia. I also gave away a pair of skinwall Tioga City Slickers last year.

I might try some Panaracer Paselas if I can get hold of some at a reasonable enough price.

Next job is to strip the bottom bracket (I assume it's original, but I'll double check that) and to straighten out .... no, what's the opposite of "straighten out"? "bend out"? The ends of the KKT pedals to try to restore their original shape. 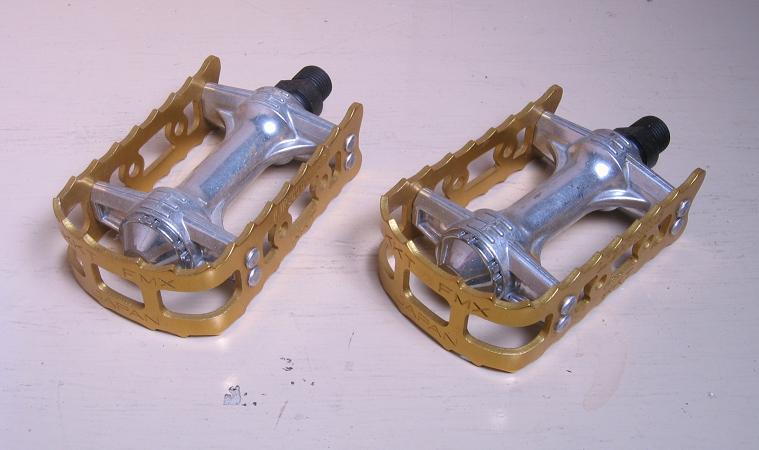 They'd look out of place if they looked like that mind, but I could clean them up a little more.

it's hard to believe how old these bikes are once fettled with and ridden.

i know where there is some bull-moose bars in black. saw them today on a frame i couldn't recognise, low-end sort of bike but, those bars...

Do you want me persuit and get a price? IF i even get rolling tomorrow with this snow falling here in west/north yorks.

it's hard to believe how old these bikes are once fettled with and ridden.

i know where there is some bull-moose bars in black. saw them today on a frame i couldn't recognise, low-end sort of bike but, those bars...

Do you want me persuit and get a price? IF i even get rolling tomorrow with this snow falling here in west/north yorks.

Yeah, that would be great if you could Marc.

I'd be quite happy with black, as all but NOS chrome ones are likely to have some rust spots anyway and if I can't find the original Diamond Back ones (which is highly likely) then something a bit different would be good, rather than feeling I was pretending I had the right ones, if that makes sense.
You must log in or register to reply here.