Probably should have done this before, but better late than never.

I bought the frame around 1993/4 from Bromley Bike shop (Cycleland, I think, back in the day).
It was discounted as it was one of the Cycle land race bikes. My friends and I had seen them around ridden in Shirley Hills when they were originally in white, but when they came up for sale they had all been re-sprayed orange and grey.

Being in my early teens at the time, I couldn’t afford my dream build so a set of Accu Trax forks, XT groupset and a few Syncros parts were as good as it got, although I managed to push the boat out on the rear wheel with a blue Ringle hub.

The bike took about 6-9 months to build and was eventually ready for the cyclocross events at Shirley Hills. I was a member of Addiscombe CC at the time so there was a lot of support there.
I also remember riding it on the National points series and got some reasonably good results (top 10) beating some sponsored riders.

Anyway, school finished university beckoned and the booze and clubs took over.
Once I started working, cycling took a back seat for a number of years until I was invited to take part in the London Triathlon as part of a team entry. With no training and no other bike, the Yeti was used with the only concession being road tyres.
This re-ignited the spark of cycling for me and I decided to refresh the bike (and also get a road bike).
The frame was re-sprayed back to the original colour following repairs to the seattube, Manitou forks were sourced (I always wanted these), and some NOS Ringle hubs came up for sale and so the wheels were re-built.
The Maguras actually were bought in the late 90s whilst at university and replaced the original XT.
Syncros handlebars, USE seatpost and Flite seat were all the original, however the Syncros stem and King devolution headset were acquired when the forks were fitted in around 2007.

For a short while it had a Tioga disc drive but it was damaged so it was disposed of.
Next items on the agenda are to replace the stem with something more original, possibly a Ringle in black or purple, and replace the skewers. The front is a Fast Feather Ti and the rear is a Ritchey which replaced the Fast Feather one which snapped, along with some of the eyelets on the original Ringle hub.

At the moment it doesn’t get any use but that is expected to change as it is a strong and useable bike and I plan to use it for racing again once i’ve got my fitness back. 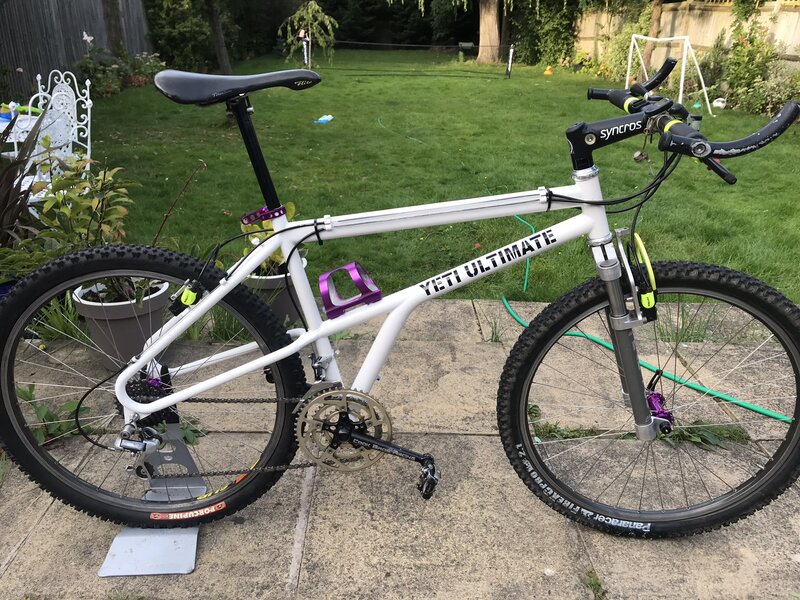 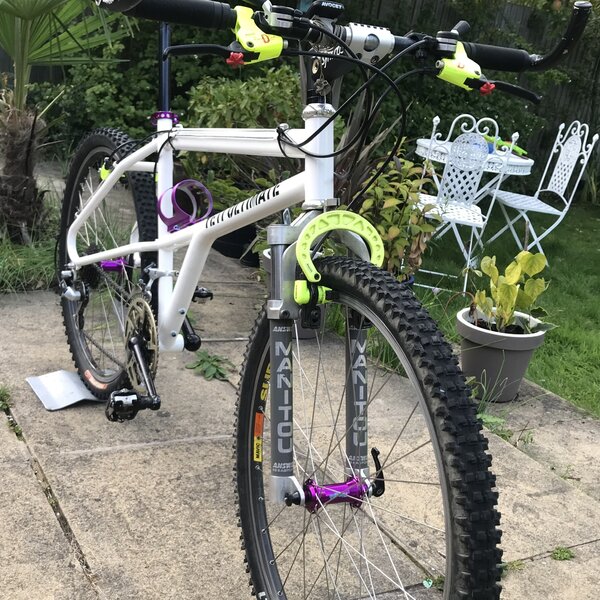 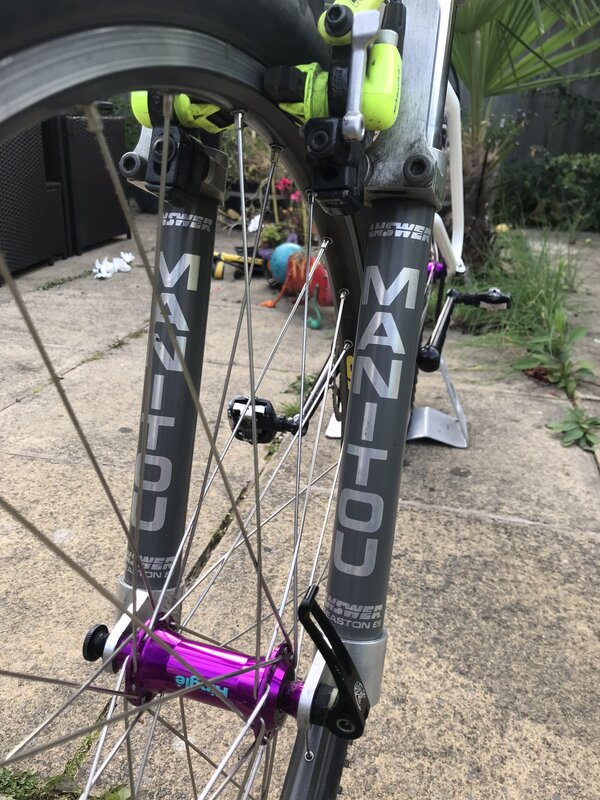 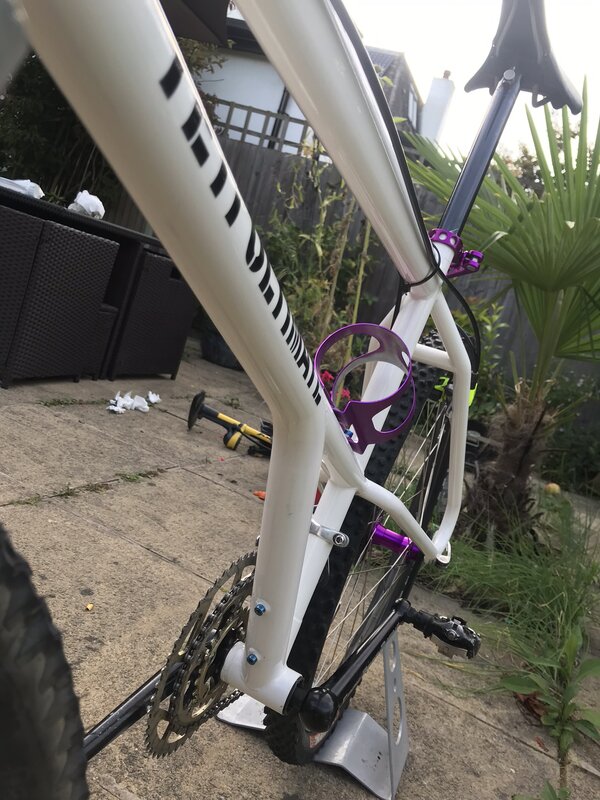 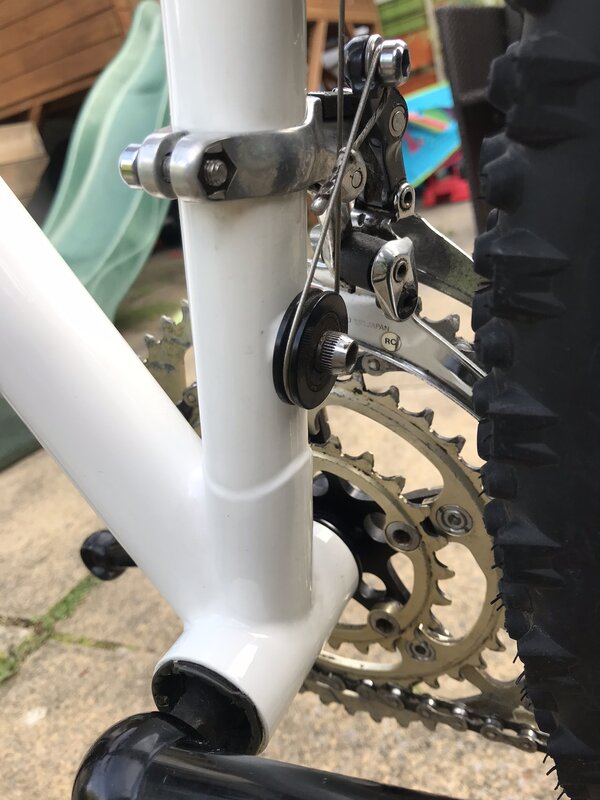 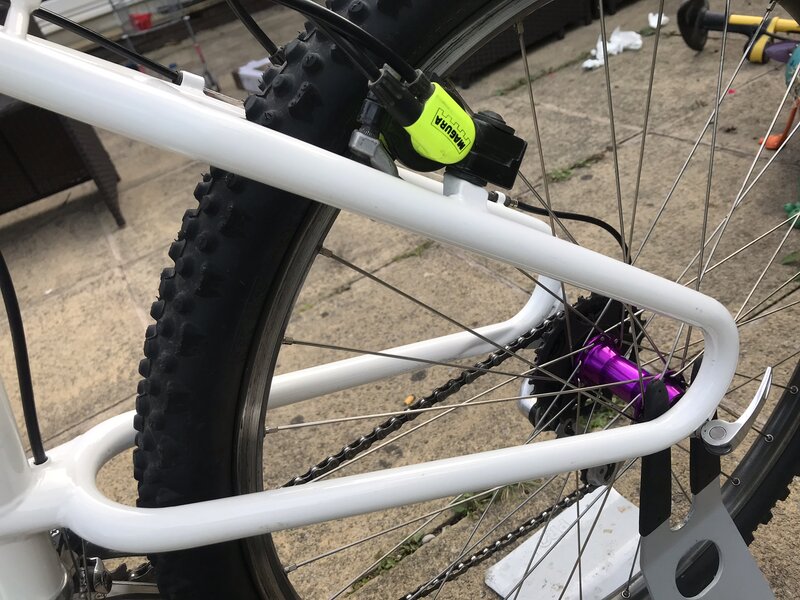 That's an amazing bike. And even better that you've had it for so long and that it comes with a ton of personal history between you and it!

Nice to hear about the timeline with regards to the various upgrades.

Not your dream build at the time you say? Early teens you say?

Christ, my early teens were spent on a Saracen from Halfords!

Yetichaser said:
-snip-... and I plan to use it for racing again once i’ve got my fitness back. -snip-
Click to expand...

So Mr Yetichaser will again be chasing others on his Yeti? I´m fully supportive of this plan!
Y

Don’t get me wrong, I realise I was lucky for the opportunity to buy it, its just that once I bought the frame I didn’t have much left for the build that was typical at the time ie Bullseye and Ringle goodness.

The rims were Mavic SUP 117 and the front was built on a Hope ti hib (since been sold as the Ringle was sourced this century), and as mentioned before, the original blue Ringle was damaged after racing so now replaced with a purple equivalent.

The original cranks were Ritchey Logic but in more recent years these were replaced with Cook Bros, and the bottle cage is a relatively recent addition.
BTW, when I say recent, I mean 10-15 years ago.

I believe it is also a very early example given the frame number which dates it back to 1989.

The frame repair was carried out around 2009ish by Chas Roberts, who also did the re-spray. His initial comments when I took the frame to him was that it was a load of American rubbish.

Apparantly he called up Bromley Bike shop to say he had one of their frames in for repairs. I was so pleased with the repairs that I ended up buying a Dogs Bolx from him shortly after (another story for another time).
Y

Dr Dremel said:
So Mr Yetichaser will again be chasing others on his Yeti? I´m fully supportive of this plan!
Click to expand...

Chasing others might be far fetched, following others and getting left behind in the distance is probably a more accurate description of my ability at the moment!

Fat Chance Fan
One can dream, right? It´s just you hear not often enough that such a gem will again be used for what it was build for.

Edit: Also just looked closer at the repair, that looks unusual but tidy! Is it a faux lug (aka fillet brazed then filed) or a sleeve put in?
Y

Dr Dremel said:
One can dream, right? It´s just you hear not often enough that such a gem will again be used for what it was build for.

Edit: Also just looked closer at the repair, that looks unusual but tidy! Is it a faux lug (aka fillet brazed then filed) or a sleeve put in?
Click to expand...

Thanks
The repair was a sleeve. Rather nicely executed and adds a bit of history.
but what I like the most is the fact it was Roberts that did the repair. I also dreamt of a Roberts as a teenager, and to have Chas work his magic on this frame is quite interesting and also led to the comments about American rubbish - a bit of one-upmanship between him and Evolution Imports which was funny.

Its worth noting that the rusting was caused by water collecting at the bottom of the seattube. Chas also drilled a hole out (this is standard practice on the Dogs Bolx) and i’ve seen this on my Yo Eddy that has had a replacement seattube in the past

Fat Chance Fan
Really liking the repair, just adds to the history you have with the bike. TBH I prefer such stories very much over a garage queen blinged out builds (although nothing wrong with that per se).
Yeah the missing drain hole on American frames was also reason for a bit of ridicule/consternation from the shop where I bought my stuff BITD. Their solution was to shove literally a whole can of grease down the seat tube (well minus the can). Worked for me!

Love to buy your front black skewer if you sell It. Look mad with some purple Ringles. Sick bike mate
Y

racer x said:
Love to buy your front black skewer if you sell It. Look mad with some purple Ringles. Sick bike mate
Click to expand...

Cheers
The front skewer may be up for sale if I can find some sensibly priced Ringle replacements.
In fact, if I can, then the Ti Fast Feather rear may also be sold
You must log in or register to reply here.

T
A tale of two Scotts
2