Feature Bike
Chaps, I was lucky enough to secure what looks like an ex Tim Gould race bike last week

I got some of its history from the vendor [a friend of the Gould family], but there are still lots of questions to answer, and I think a big part of this build is going to be sorting out its history.

Any way - here's some pics:

The parts and serial number - 89511 - seem to back up the expert opinion on here, that it is a 1989 bike, probably raced during 1990. The frame and fork are fillet brazed Reynolds 753, and like the other team Peugeot frames of the era, were crafted by Chas Roberts: White Spiders.

This one's built with predominently XT components: biopace rings and Mavic M4 rims; a specialized bar, T bone-style stem and tioga pedals; Shimano 600 headset, and a San Marco saddle with Look badges in the signature brown leather of the day. Tyres are a fat Farmer John up front and a bony Wolber 'Integral' at the back [more of which later].

Before I make any big decisions on build, I need to sort out the timeline for this machine, and put it in context of Tim G's races. Firstly, I'm pretty sure it's not the 1990 Durango medal winner: from what I see on a grainy flick on youtube, that one had the blue team colours and a curved fork. So where does this fit in the race calendar?

Wu kindly got the ball rolling on the detective work with this: 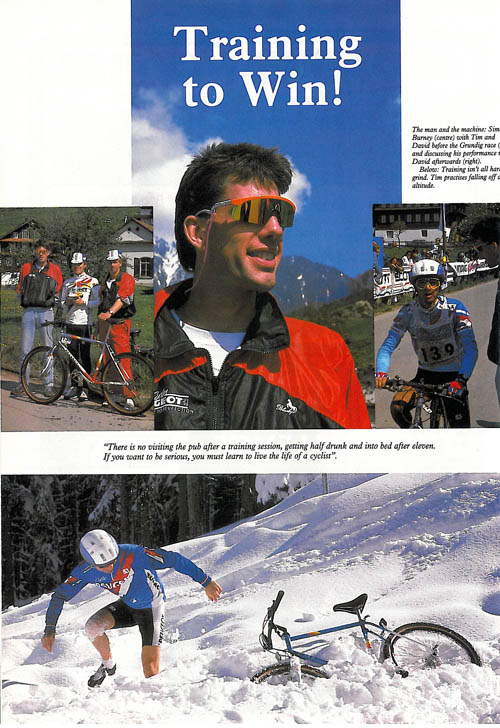 What issue did this appear in Gus?

I've since spent a pleasurable few hours trawling this site and have come up with the following (thanks to the original posters for going to the trouble of scanning them): 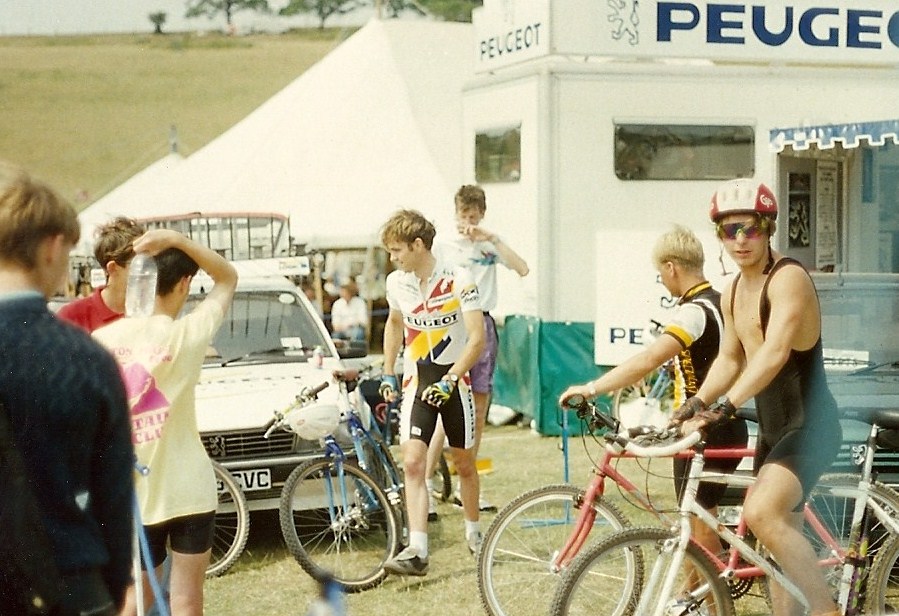 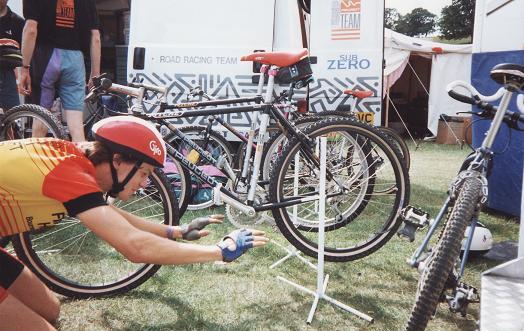 But the closest is this, which I think is Peebles. I can't tell the riders apart, but the bike is a spit. Anyone know the year and month? 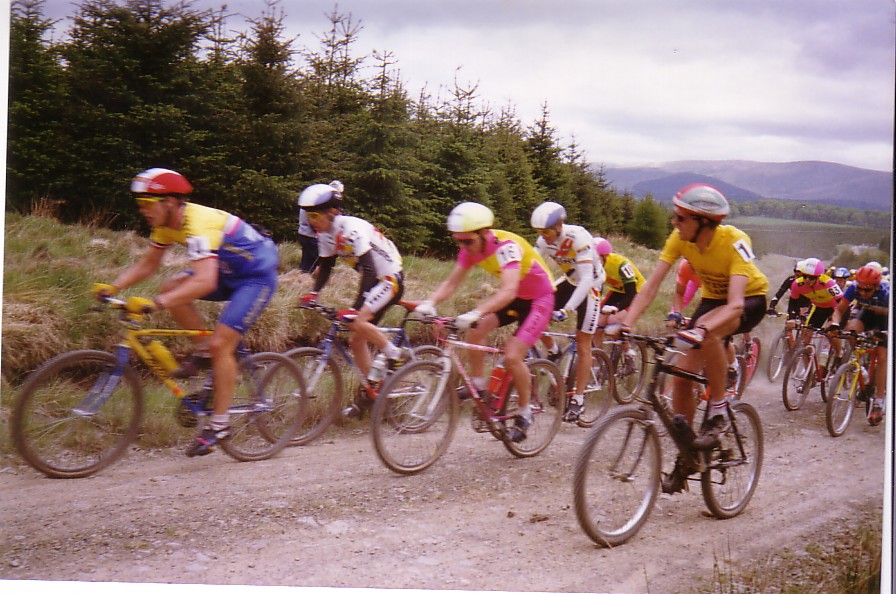 Having spent the day sneaking out to the shed to oggle details, a few intriguing things occur:

It's built for reliability: despite the 753 frame it weighs 28lb and the components err on the side of sturdy. This is obvious really when you think of stories of snapped kit losing races: there is a nice war story on VRC about a chap who aparently would have taken bronze at Durango in 1990 - his bike failed and a certain Tim Gould passed him on the trail and into history. Also look at the toe clips: double Christope frames neatly rivetted together for extra stiffness. 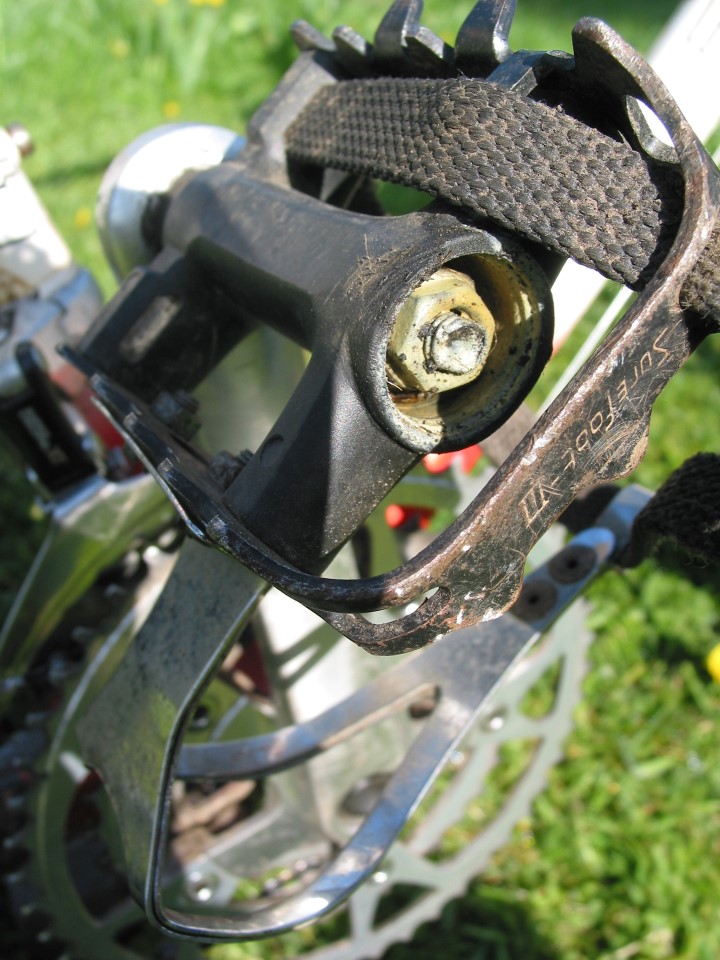 But the biggest surprise for me, is that there is hardly any tyre clearance at the back. At first I thought the Wolber skinny was a make-do added by one of the later owners; but you'd be hard pressed to get anything wider than a 1.7 in there. 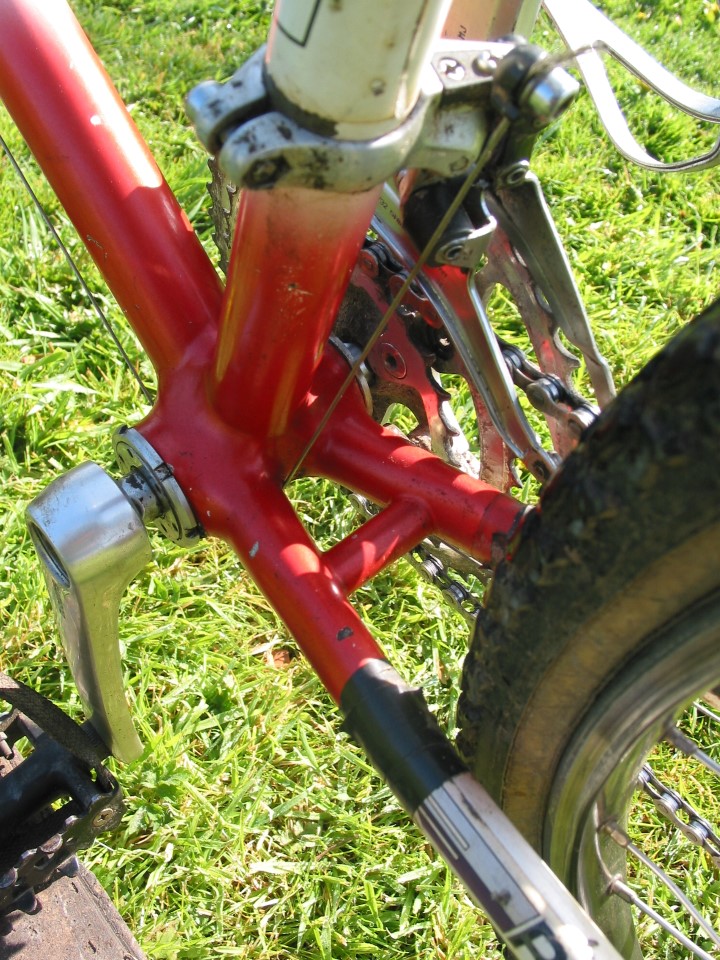 So tell me, you racing gurus, did the early teams build a number of different bikes for the different disciplines, courses, and even conditions? Or did each rider plumb for his optimum set up?

Over the coming weeks, I'm going to need a fair bit of help sorting the build of this thing, and to kick off, I'd welcome any advice, recollections or pics that can shed light on the race scene in the late eighties and early nineties.

Top of the list is a race calendar for 1989 and 1990: I'm trying to pin down which races took place in which month of each year, and who came where [how I wish I'd kept those mags].

Great find, looking forward to seeing how this develops

any way of getting the info straight from the horse's mouth?

Fantastic buy and a great read. Delighted this piece of history has fallen into the right hands. I'm sure someone on the forum will be able to get you in contact with Tim Gould to answer many of your questions. If not people like the 'flyingwelshman', who spent many hours on the back wheel of these bikes will be your best bet.

Just a thought with regards to paint. It is possible that this bike has seen many different paint schemes. If the rider liked the frame he might of kept it as his favourite and just had the paintwork updated.

A great rider too

I really enjoyed this this story.so far...

I don't know where Gouldy is but I bet Gary Foord knows where he is.

Gary has a bike shop - Mammoth Lifestyle at Milford near Stafford. Give him a try?

Great piece of history there.. I must admit I did see this and was VERY tempted, in fact I had to stop myself ,

When I remember tims bike I remember it having Campag Euclid ?components on it I think, not sure what year that was ? I have a few mags somewhere I think with some pics in etc, I will have to have a search around and have a read up..

Tim was one of the true XC mountain bike riders that really inspired me BITD ...

Really going to look forward to seeing how you get on with this, can I offer first dibs please , if you decide to sell it ..